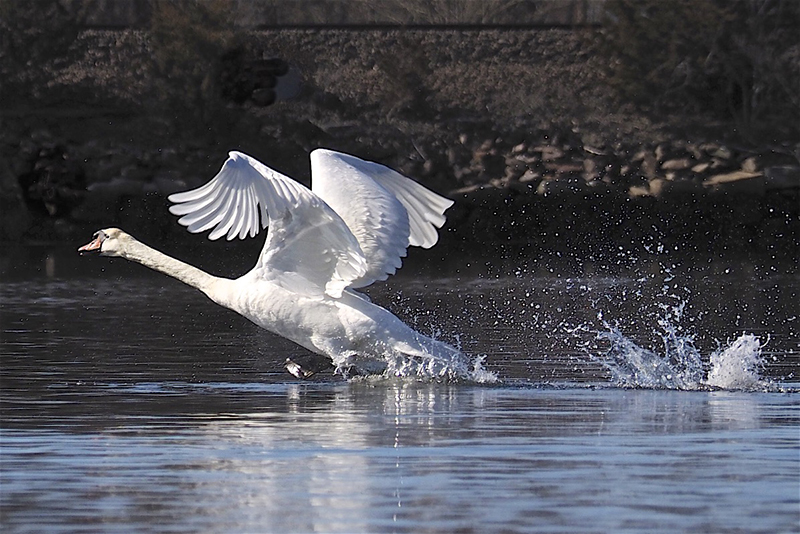 Speaking up for mute swans despite controversy
By Bill Hobbs

Spend a minute watching a mute swan go airborne. These stunning birds, who often gather at the mouth of the Connecticut River, are so big they need 100 feet or more to get up and go.

Their flying challenges, oddly, remind me of my days—in the early 1970s—serving onboard the aircraft carrier USS Saratoga, and watching her sleek F-4 Phantom II jet fighters catapult off the flight deck.

To give the fighters maximum lift, the lumbering, 1,300-foot-long carrier would take a half mile to turn into the wind, before releasing the fighters.

Mute swans, similarly, need all the lift they can get. Poised to fly, these majestic birds turn into the wind, lean forward, and simultaneously flap their seven-foot wings and pound the surface of the water with their huge, webbed feet.

Stirring for me is hearing their wings whistle, and listening to the sound of “splash, splash, splash,” as their feet dig into the water’s surface to help them get airborne. For a moment, it does not look like the swans will escape the pull of gravity, but they do.

Meanwhile, on the Saratoga, we sailors would often watch “flight operations” from below decks, out of harm’s way, on a closed-circuit TV.

After each launch, you could hear the catapult being pulled back and reloaded. Then we could see the pilot give a thumbs up through their plexiglass canopies, and like the swans, both the pilot and jet fighter seemed to lean forward with anxious anticipation, before the plane was thrown down the deck at 140 knots, dipping below the flight deck for a millisecond, then climbing into the sky. I was always stirred by that sight, too.

By the way, mute swans weigh 20–26 pounds, while F-4 Phantoms weigh 55,597 pounds. The point is, they are both hefty and need lots of thrust to get aloft.

In North America, there are two native swan species. They are the trumpeter and tundra (formerly whistling) swans.
Mute swans, however, are non-native, imported to America from Europe in the mid-1800s to “decorate” parks and estates. Over the years, many “escaped,” bred, and populated coves and inlets along the Eastern seaboard.

Now, there are an estimated 7,000 mute swans that occupy coastal and freshwater habitats along the Atlantic Coast, from New Hampshire to Florida, the Great Lakes, Washington state, Southern Ontario, and British Columbia, according to Bud Titlow, a wetland scientist and wildlife biologist.

Unfortunately, these beautiful birds are considered “invasive,” and have an adverse effect on estuarine ecology, each eating about eight pounds of aquatic vegetation per day. This activity uproots and destroys plant life that is a main source of food for many native birds and protective cover for native fish, as well.

Finally, how do you identify mute swans? They have an orange bill, a black knob on the top of their bill, and an elegant “S” curve of the neck, while trumpeter swans have a “C” curve. Enjoy bird watching!

Bill Hobbs is the “Wildlife Wonders” columnist for Estuary magazine. This article was originally published by the Times weekly newspapers and The Day Publishing Co. He lives in Stonington, CT, and can be reached for comments at whobbs246@gmail.com.

Check out these other articles by Bill Hobbs in Estuary magazine.

The Many Gifts of a Crow