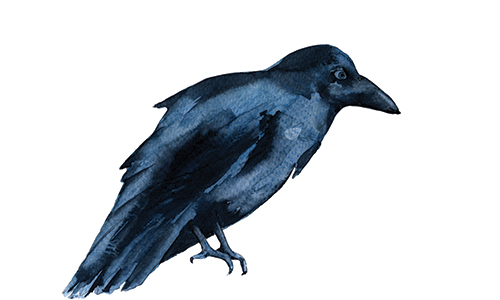 There are not many creatures in the animal world that can outwit a crow. For that matter, humans have had a tough time outsmarting them, too.

Here’s an encounter with a flock of crows, for example, that left one University of Connecticut scientist shaking his head.

“Years ago,” said Chris Elphick, professor of ecology and evolutionary biology, “I was studying the effects of predators on beach nesting birds here in Connecticut.  To do this, we created artificial nests using quail eggs, to estimate predation rates.

“The only problem was that, within a day or two, the crows had figured out what we were doing, and would follow us down the beach eating all the eggs we had put into fake nests as soon as we moved on to the next site.

“We had to totally redesign the experiment,” Elphick remembered with a laugh.

Patrick Comins, executive director of The Connecticut Audubon Society, is another one impressed with these unique birds, who are known to gather around their dead, design and use tools, lure fish and birds to their death, and use cars to crack nuts on the streets, to name a few of their astonishing feats.

“Crows are among the most intelligent of all birds,” said Comins, adding, “They have been able to be taught how to count and even mimic human language.”

What sets crows, ravens, jays, magpies, and nutcrackers apart from other fowl in the world is the fact that this family of birds, called “corvids,” have unusually large brains.

“Corvids in general have brains on a par with similar-size mammals, not birds, and crows and ravens in particular have brains the size of that of a small monkey,” writes John Marzluff, professor of wildlife science at the University of Washington in his fascinating book, Gifts of the Crow.

Ravens, for example, who are the closest kin to crows, have been observed by researchers crushing tunnels made by voles under the snow, then waiting and watching for the rodents to appear from a nearby perch. “This unique hunting strategy demonstrates imagination—the ability to visualize an out-of-sight object, as well as planning and anticipation,” Marzluff said. 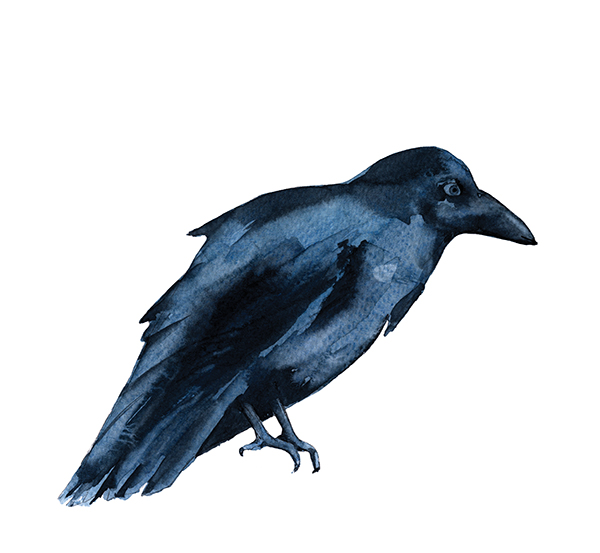 According to Marzluff, when crows follow a person who is feeding them, they may drop gifts. He cites Leona from Missouri, who routinely receives shards of colored glass in her bird feeder in exchange for sunflower seeds. And Beth, a crow feeder from Seattle, who leaves dog kibble for her crows, once received a bright house key, dropped by one of the crows.

Because the territories of American crows and fish crows overlap and they look alike, Roger Tory Peterson, the acclaimed author of the Peterson Field Guide series, recommends that we identify the two different crows by their voice, rather than size.

“The American crow utters an honest-to-goodness caw, while the fish crow has a short ca, or two-syllabled ca-ha,” he said.

Finally, crows are very social, mate for life, form tight, extended families, and can live up to 16 years in the wild. In the winter, they also roost together in large, noisy flocks, sometimes numbering in the thousands.

Lastly, Comins paints a whimsical picture about these remarkable birds. “I like to observe the fish crows in my neighborhood in the morning. It almost seems like they have a morning meeting, forming a tight group, cawing back and forth until eventually they all set off in different directions.

“Maybe they’re discussing which streets have garbage pickup on that day,” he said.

Bill Hobbs is a nature columnist for The Day in New London, CT. For comments, he can be reached at
whobbs246@gmail.com.