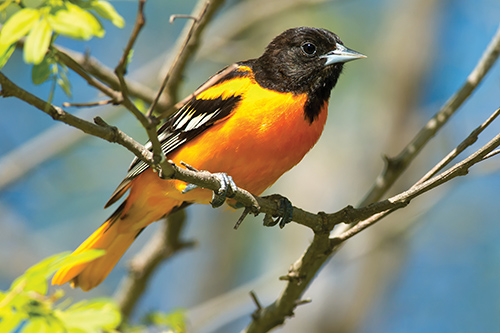 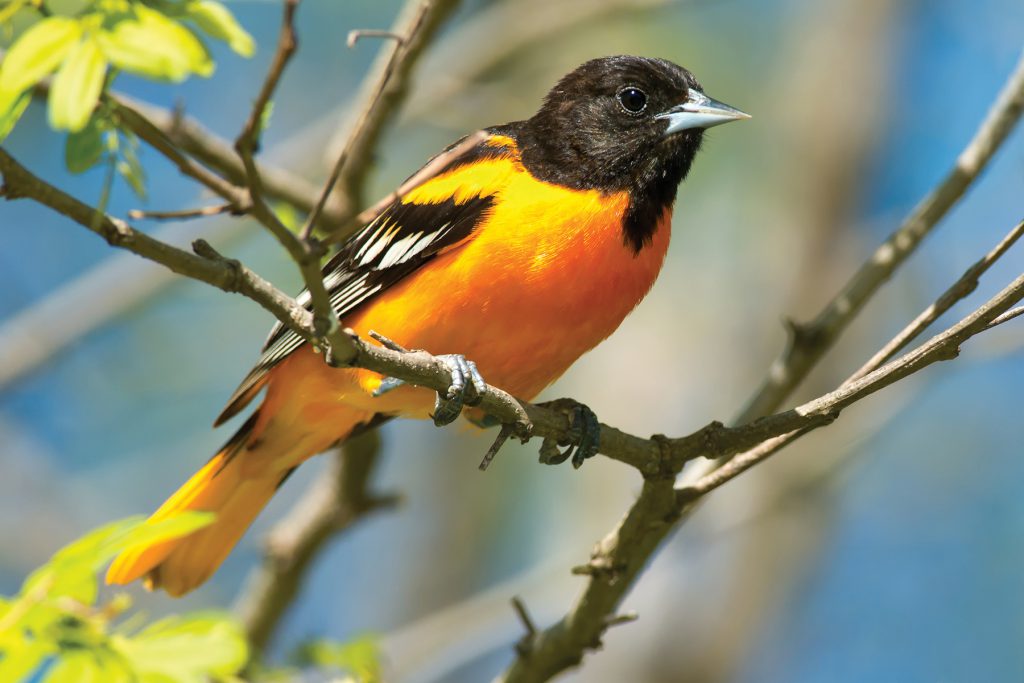 Few birds can match the eye-popping beauty of the male Baltimore oriole or the flying prowess of the ruby-throated hummingbird.

By mid-May, weather permitting, these popular birds, including millions of other migratory songbirds are expected to arrive in full force in the Connecticut River Valley. Although many of us admire these backyard winged guests, few people know details about their background, lifestyle, and amazing migration patterns.

Baltimore orioles take their name from Lord Baltimore, founder of the colony of Maryland, who had the same striking orange and black colors in his family coat of arms. Baltimore orioles and the American redstart, a smaller warbler, are the only birds in North America to have these beautiful colors for plumage.

These unique birds eat both insects and ripe fruit. With their rapier-like beaks, Baltimore orioles stab and slash fruit with their mouths open (the technique is called “gaping”), consuming the pulp and nectar with their brushy tongues. Devoted backyard birders will often put out feeders with fresh oranges and grape jelly—a favorite for orioles that are migrating or nesting in the area.

The hummingbird also has many interesting qualities. “To fuel the furious pace of its life—even resting, a hummingbird breathes 250 times a minute, and its heart pounds at five hundred beats per minute—a hummer must daily visit fifteen hundred flowers and eat six hundred to seven hundred insects,” said Sy Montgomery, author of Birdology. In fact, “Food is so precious to hummingbirds that they will defend ‘their’ flowers and feeders against all comers. They sometimes even chase away hawks and crows,” Montgomery said.

Hummingbirds are the only birds in the world that can fly forwards, backwards, upside down, and hover. There are more than 300 known hummingbird species in the world. Twelve species breed in North America. The ruby-throated hummer is the only one to breed east of the Great Plains states.

Migration Patterns
Baltimore orioles and ruby-throated hummingbirds both fly over a thousand miles, one way, to reach the Connecticut River Valley. Orioles, for example, winter in Central and Northern South America; the ruby-throated hummer in Southeastern Mexico. In early spring, both species fly to the Yucatan Peninsula, the first leg of their journey, joining millions of other songbirds, like thrushes, vireos, flycatchers, grosbeaks, finches, warblers, and tanagers. There they fatten up on insects (they will need this critical fuel) before crossing the Gulf of Mexico, a daunting 550-mile, non-stop flight across a vast, featureless body of water.

How do they cross the Gulf? “Songbirds like orioles and hummingbirds want to fly at night because the air is less turbulent, temperatures are cooler, and there are fewer predators (hawks do not fly at night),” said Ken Elkins, community conservation manager for Audubon Connecticut.

When songbirds migrate, Elkins said they do not fly in formation like geese or cormorants. Instead, they fly individually or in mixed flocks at 500–1,000 feet high, searching for favorable tailwinds, and navigating by stars and the pull of the earth’s gravitational forces.

“We don’t know much about this part of their lives,” Elkins said. But he said scientists do know songbirds talk to each other when migrating, emitting tiny “chip, chip” calls to keep in touch with each other. “The calls are like their own air traffic control system when they’re flying at night,” Elkins said.

On a good night, songbirds like Baltimore orioles can cross the Gulf in 11–12 hours. Ruby-throated hummingbirds can make it in 24–26 hours, a testament to their unbelievable strength. Thankfully, millions of ruby-throated hummingbirds, orioles, and other migratory birds successfully navigate the Gulf of Mexico, sometimes twice a year, and make it all the way up to the Connecticut River Valley and beyond, for us to enjoy. 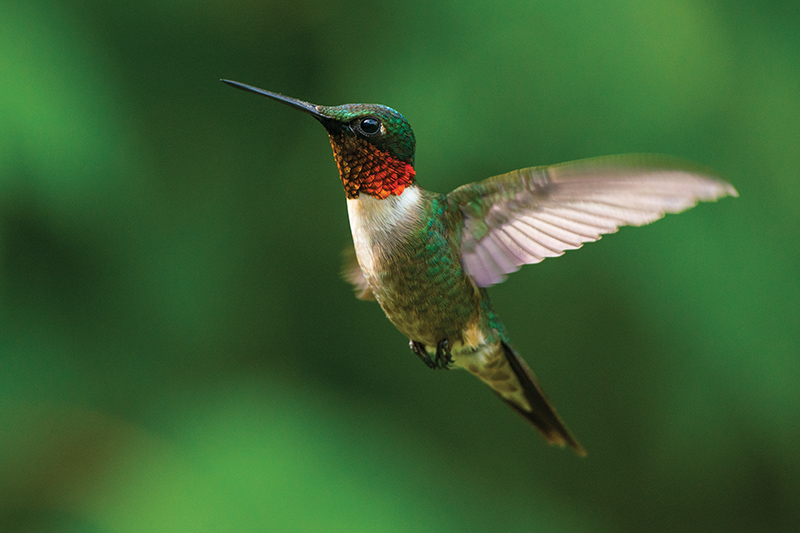 Here at Home in New England
Where can you go to view Baltimore orioles? Elkins said the many bird sanctuaries and wildlife areas that front the Connecticut River, or park-like settings and edges of wetlands, are excellent spots to see orioles. But bring binoculars, Elkins said, because Baltimore orioles hunt for insects high in the boughs of trees.

Finally, how do you attract ruby-throated hummingbirds to your backyard? You can either plant tubular flowers, like trumpet honeysuckle, scarlet beebalm, or cardinal flower in your garden, and/or buy an inexpensive hummingbird feeder, fill it with sugar water, and hang it away from windows and cats, please.

The formula for sugar water is 1 cup of sugar in 4 cups of water, bring the mixture to a light boil, turn it off, and let cool. You do not need to add red dye to the solution. I make a quart at a time and keep it in the refrigerator. The sugar water should be changed at least every 3–4 days, and the feeding holes cleaned regularly, so that you do not sicken the hummingbirds. Enjoy!