One graduate student asks the question “Where are all the fishers?”

A fisher in Connecticut.
Photo by Paul Fusco.

Katerina “Kat” Gillis has dedicated the last two years of her life on a mission to help Connecticut wildlife officials prevent the loss of fishers, a medium-sized animal that inhabits our forests.

Fishers (Pekania pennanti) are the second largest member of the weasel family, next to the river otter. They are formidable predators, albeit small. In fact, most are 32 to 42 inches long, 12 to 16 inches high, and weigh 8 to 13 pounds. But they are fast, preying upon porcupines, squirrels, raccoons, rabbits, birds, frogs, snakes, and insects. And one reason why Gillis is so determined to help officials preserve fishers is due in part to the alarming possibility that these rarely seen animals are in steep decline in Connecticut, as evidenced by two closely watched indicators: actual sightings and tagged pelts from trappers.

But Gillis does not mind the hardships. Fishers attract her in many ways. “They have a cool breeding strategy, called delayed implantation,” Gillis said, adding, once fishers have mated, it takes 10–11 months for the embryo to implant in the womb, enabling the female to have enough time to gain sustenance and be able to produce young. “That’s super interesting to me,” Gillis said.

Gillis swaps out a memory card in one of her study cameras during a weekly visit to rebait and check her fisher study sites.
Photo by Christopher Zajac.

Also, Gillis said fishers are one of two animals in North America that can take down a porcupine. The other is the mountain lion—and with over 200 baited camera traps deployed across the state over the past two years, she doesn’t have a single photo of a mountain lion.

How do fishers avoid getting impaled by porcupine quills? Gillis said fishers wear down porcupines by repeatedly attacking the animal’s face and underbelly, two unprotected areas, before dispatching them.

Fishers are native only to North America and have a rich history. For instance, in 1609, when Henry Hudson sailed up the Hudson River, “trade with Native Americans raised awareness of the fisher’s fur and its potential value,” according to the website adirondeck.net.

Since then, fisher populations have seesawed from being almost totally wiped out in the 19th and early part of the 20th century in New England, to being reintroduced in the 1950s and again in the early 1990s.

Now, their status is in question in Connecticut, and researchers like Gillis are wondering: Are fishers over-trapped? Is there not enough habitat for them? “That’s what my thesis is trying to discover,” the 28-year-old native of New Britain, Connecticut, explained.

By the end of this year, Gillis will submit her findings as part of her master’s thesis to the Connecticut Department of Energy and Environmental Protection. She hopes her report will assist DEEP officials in identifying key factors that may be contributing to fisher declines, and ultimately help officials stabilize and increase the fisher’s presence in the state.

Gillis is using 45 game cameras to help her construct a map, disclosing current fisher distribution throughout the state. According to the strict protocols, which Gillis is following, each camera must be strapped chest high to trees, and face north to avoid sun glare. Then 15 feet from that tree, facing the camera, Gillis applies a stinky, gooey mess of sardines and “Marten Magic,” a grease-based lure with a strong skunk odor and other musk oils to the trunk of another tree to attract her subjects. 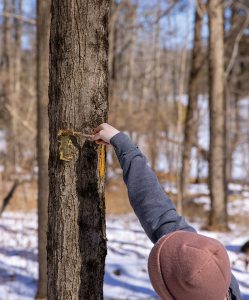 Gillis applies the “Marten Magic” scent compound to the upper portion of the tree trunk to lure fishers to the area in front of her study cameras. Gillis has been working with the goo, a putrid smelling mix of skunk odor and other musk oils, so long that she says she can barely smell it anymore.
Photo by Christopher Zajac.

Her photographic results are interesting. When I last talked to Gillis, she said five of her last seven camera sites captured brief images of fishers, walking past the cameras. But she added, “There hasn’t been a camera that I haven’t had a coyote on, so you know that fishers [in Connecticut] are constantly competing for food resources and territory in general.”

Indeed, when I think about it, how ironic and special is this story? Here is this little-known animal, followed by a young woman with a big heart and the determination of a seasoned scientist to help preserve the livelihood of fishers in Connecticut. In other words, Gillis may not be well-known now, but I predict when she finishes her fisher research and submits her findings to DEEP, she will be well on her way to becoming a star in wildlife biology circles.

“Fishers have a place here,” Gillis said. “They are a native species, and we should preserve species that are native to our state.”

Fisher. There is no cat.
The scientific name for fishers is Pekania pennanti, changed from Martes pennanti in 2015. They are members of the Mustelidae family, which includes weasels, badgers, otters, ferrets, martens, and wolverines, among others.