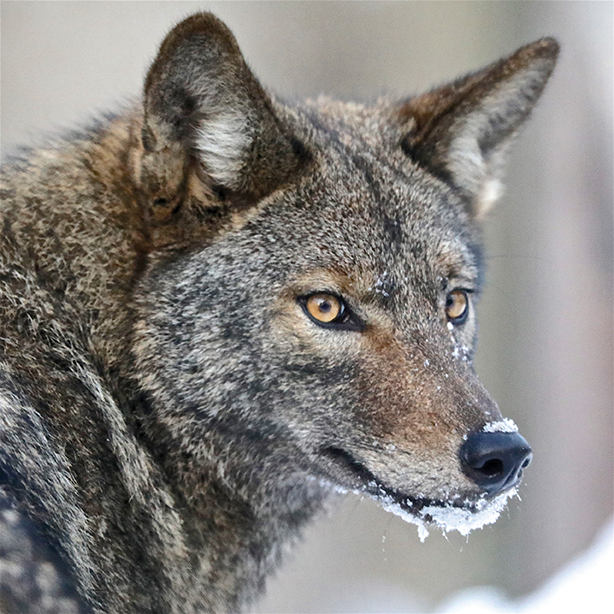 You May Find the Answers Interesting

When Joshua Morse was 10, he had an encounter with two coyotes that left a lasting impression upon him, one that he may never forget.

Walking with his family dog, Oreo, on his great grandmother’s property in Western Massachusetts, he vividly remembers two coyotes came out of the woods to sniff his pet dog. Meanwhile, Oreo, who was off leash, surprised Morse. Instead of barking, the 60-pound Lab-Collie-Pit Bull mix wagged its tail and walked over to inspect the coyotes.

“I remember holding my breath in disbelief, and knew this was a really unusual moment, one that could go very badly,” Morse recalled. Thankfully, the extraordinary event ended peacefully.

Morse said Oreo and the coyotes ran in circles for a moment, before the coyotes slipped back into the forest. But Morse remembers coming away from the incident “feeling like I’d seen something incredible, truly magical, and also having a hard time getting my family to believe what I saw.”

Ironically, 21 years later, Morse is now collecting and analyzing other people’s encounters with eastern coyotes (Canis latrans) in an effort to earn a doctoral degree in natural resources, with a focus on human dimensions of wildlife, from the University of Vermont. He hopes his collection of interviews will ultimately help wildlife managers set coyote policies in the Green Mountain state.

When I asked the 31-year-old native of Wellesley, Massachusetts, what causes the eastern coyote to be so contentious with humans, Morse said, “We may never know the real answer. Coyotes touch on a wide range of things people care about in relation to nature, and maybe that’s why there is such a diversity of attitudes and experiences around them.”

Others agree. “From my perspective, coyotes are one of the most polarizing animals I deal with—people tend to either love them or hate them, depending on their perspective and experience with them,” said Kim Royar, furbearer project leader for Vermont’s Fish and Wildlife Department. And Dr. Isaac “Morty” Ortega, associate professor in the Department of Natural Resources & Environment at the University of Connecticut, shared this view: “I believe the answer has to do with the coyote being associated with the dog family. People will love coyotes because they see a ‘wild dog’ in it. At the same time, they are afraid (a different way of hate) because [they know] it can attack and kill their own dogs and cats.”

Clearly, everyone seems to have a strong opinion about the Eastern coyote, but what I find interesting is pro and con advocates also admire the animal. For example, Ortega makes this comment: “Coyotes do not have issues with humans. They have adapted and learned to live around us, while wolves do have issues with humans and want to live as far away as possible from us.” And the Vermont Trappers Association asserts, “While coyotes kill other animals to eat and survive, including an occasional deer, they should not be subjected to an extermination program. Coyotes fill the role of a natural predator, a role that is important for maintaining the dynamics and health of our ecosystems.”

Fun Facts
The Aztecs had a word for this agile hunter, who is a native to deserts and the Great Plains states. They called it “coyotl,” or barking dog. However, with the expiration of wolves in the late 19th and early 20th centuries, coyotes shifted eastward, moving up through the Great Lakes region, into Southern Canada, where it’s believed some mated with wolves, creating so-called “coywolves,” a term no longer used in scientific circles. They then crossed the St. Lawrence River and came into New England. Coyotes were documented in New York as early as the 1920s; in Maine by the 1930s; Vermont by the 1940s; and Rhode Island by the 1960s. Coyotes now live in every state except Hawaii.

Using their excellent sense of smell, hearing, and speed, Eastern coyotes hunt rabbits, squirrels, woodchucks, young deer, mice, voles, birds, snakes, and insects. Adult males weigh 40–45 pounds, and females, 35–40 pounds. Pairs mate in January or February (they do not mate for life), with the female usually giving birth to 4–7 pups in an old or newly excavated den. Juvenile coyotes stay with their parents 10 months or longer, then disperse. Coyotes live an average of 5–8 years in the wild.

Advice From the Experts
Coyote attacks on humans are extremely rare, but they do happen. For example, on January 20, 2020, the Boston Globe reported a 62-year-old woman and her dog were attacked on her porch by a coyote in Kensington, New Hampshire. Contractors, working nearby, came to the woman’s assistance and scared off the animal. Elsewhere, massaudubon.org said their state has had 10 coyote attacks on humans in the last 60 years. 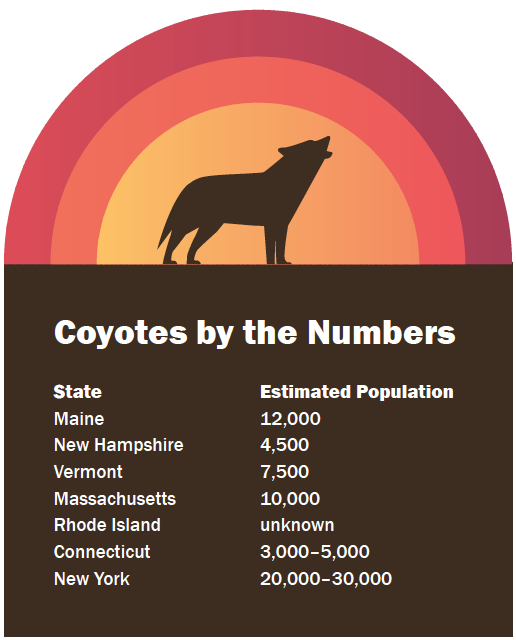 If you notice a coyote coming too close to you, authorities recommend you clap your hands, look big, wave your arms, shout, or use a whistle, while slowly backing away. Never run, they urge. And if you encounter an aggressive coyote near your house, using an air horn or banging pots and pans together is another tactic, designed to frighten the animal. Never hand feed or intentionally feed coyotes. Keep pets on a leash, when walking them, and always keep small pets, especially cats, inside at night.

Finally, can humans and coyotes coexist? The answer should be yes. Here’s why:

“A healthy environment has everything to do with balance, and a lack of large predators would likely have a cascading effect throughout the ecosystem,” explained Samantha Lewis, a Garmany Graduate Research Fellow at the McLean Game Refuge in Granby, Connecticut. “Eastern coyotes are doing their best to fill the niche of wolves that used to live here and should be viewed as an integral part of our landscape,” Lewis said, eloquently adding, “Besides the tremendous ecological benefit of Eastern coyotes, their ability to adapt to so many different types of environments is highly impressive, and they are simply beautiful creatures.”