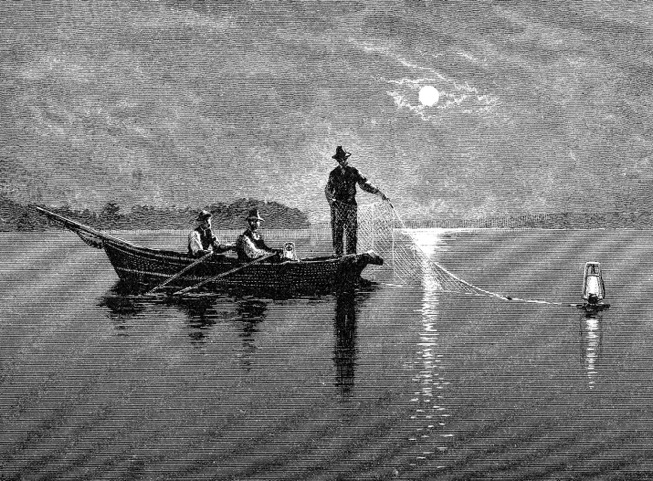 Early on an April morning, a cold mist lies over the Connecticut River. When the sun breaks through and the mist rises, there is shimmering on the water. Regularly, for a brief moment, the modern melds into the timeless and across the expanse of marshes and blue water you see the silver flash and hear the blare of a diesel horn from the Old Lyme Draw every time an Amtrak train speeds along the old truss railroad bridge. You imagine some of the busy commuters on their way between Boston and New York looking up from their laptops to refresh themselves with a view of the tidal creeks and coves and the wide river meeting the waters of Long Island Sound beyond. The sleeping yachts are still wrapped in their white plastic cocoons for the winter. Marking the shore in the distance stands Lynde Point Lighthouse, and beyond, Saybrook Outer Light.

The brackish water of the wide estuary is warming past 40 degrees Fahrenheit. In front yards, yellow forsythia has appeared, and clusters of yellow daffodils push up. The season has begun, and the shad are running. Where marsh becomes damp woods, you can still see here and there among the bare branches the fresh white blossoms of a small tree above the fiddlehead ferns and green shoots of skunk cabbage. This is a species of Amelanchier, the shadbush, given this homely name by the early English settlers because it flowers about the same time huge schools of shad return from the ocean and swim up New England tidal rivers.

A dirt road full of potholes leads down by an abandoned power station to an old stone wharf with weathered wooded slips along one side. Powerboats are predominant, but once at Ferry Dock, as this wharf is known, you see the remnants of a fishing fleet …

For the rest of the story, join the community and subscribe to Estuary Magazine. The inaugural issue arrive March 1, 2020.