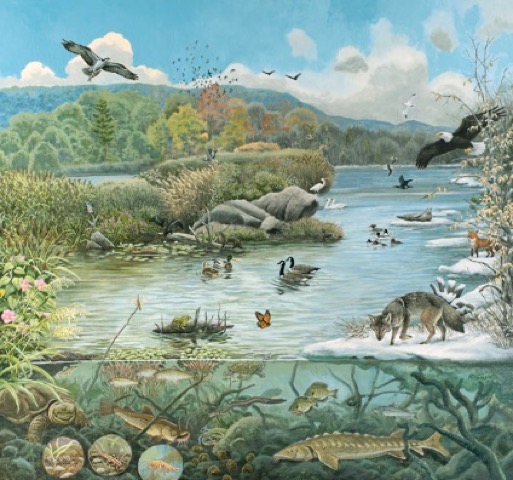 “This river, what is it called?” Balty asked the ferryman.
…
“A Hollander’ll tell you this is the Fresh River. But you won’t be finding many
Hollanders hereabouts anymore. We calls it the Great River. Which it be.”

The word “Connecticut” stems from a French corruption of the Mohegan word “Quinetucket,” which means “beside the long tidal river.” Adriaen Block, the Dutch explorer and first European to chart the River in 1614, called it the Fresh River. The English first settled the area in the 1630s and referred to it as the Great River. During the next couple of decades, the English moved west from the Massachusetts Bay Colony and north up the river, forcing the Dutch to retreat westward to New Haven, which was settled in the 1640s. By 1654, the English–Dutch boundary was established near what is now Greenwich, separating the Connecticut Colony from the New Netherland Colony (New York). During those years, the Great River began to be called the Connecticut, as was the colony established along its banks.

The Connecticut River begins its 410-mile trip to the sea in Pittsburg, New Hampshire. The iconic town was described by David Duncan in a 1985 piece for the New York Times: “Pittsburg (current population 832) is a lazy village that in 1832 was the capital of a short-lived nation, the Indian Stream Republic, which drew up its own constitution and elected a president during border disputes between Canada and New Hampshire.” The River has its origin in the Fourth Connecticut Lake, just above Moose Head Dam and about 300 yards from the Canada–US border, a boundary fixed by the 1783 Treaty of Paris that ended the Revolutionary War. Over its long run to the sea, the River descends 2,670 feet, with a watershed that spans five of the New England states (Maine, briefly) and the Province of Quebec. The watershed encompasses 7.2 million acres (twice the size of the State of Connecticut) and includes one hundred and forty-eight tributaries, on which once sat 3,000 dams and over which there were 44,000 crossings. Ninety percent of its watershed is undeveloped, with only 200,000 acres (3 percent) in conservation. Over two million people live in the 350 communities along its banks. The Connecticut begins its journey in a southwesterly direction before hitting the New Hampshire–Vermont border, then heads pretty much due south, until the “big bend” just south of Middletown, Connecticut, where it flows southeasterly until it reaches Long Island Sound between the towns of Old Saybrook and Old Lyme. As the River enters Long Island Sound, 19,600 feet of water are discharged per second, producing 70 percent of Long Island Sound’s fresh water.