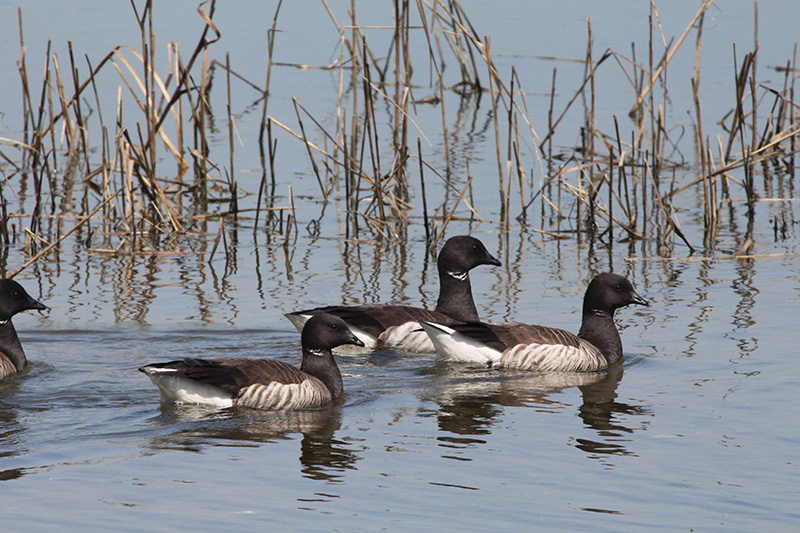 My Appreciation of the Brant

I write to share my observations and questions, offering naturalist stories and appreciation. In comparison with big honking Canada geese, Brants are demure little geese, weighing about three pounds. They have a black head and a short black bill, with no white cheek patch. Their black neck is short and stocky, but bears two small opposing patches of white feathers, sometimes painted as a necklace. Loud Canada Geese are often called “Honkers.” In contrast, Brants have a soft gabbling call. Bill Maher, an old South Jersey marsh-dwelling friend of mine, affectionately calls them “Gronkers.” He remarked that “it was truly magic to listen to a thousand on a still winter night” calling across grand expanses of New Jersey coastal salt marsh. Young and soulful, Bill roamed those habitats wearing an Ecology flag as a cape, and happily took the name “Captain Ecology.” I first encountered him and the Brant in the spring of 1971, while documenting the impact of DDT on New Jersey’s much diminished ospreys. I was discovering immense salt marshes and bays for the first time in my life—fabulous places for a young naturalist—and these were graced by the Brant. But why were some lingering well into May?

Because they had to wait for the Arctic to thaw. During breeding season, the Brant is very notably a high latitude circumpolar breeder. Some of their austere breeding sites are hundreds of miles above the Arctic Circle, and 2,500 miles north of Connecticut. Those habitats are challenges for them—and also for our imagination. They face uncertain weather in a short chilly summer, which prevents breeding success in some years. They lay a clutch of only three to five eggs, which is small for a waterfowl. They favor nesting on inaccessible islands, but still face nest predation by arctic foxes, jaegers, and… polar bears! I find Brant life history awe-inspiring and triumphant, almost preposterous. Around the pole, our species Branta bernicla is divided into three similar forms, with three common names: our Atlantic Brant, the darker Pacific Black Brant, and the Eurasian Brent Goose. These names derive from Old Norse “brandgaes,” meaning “burnt goose,” which refers to their black foreparts. The Latin species name bernicla is a whimsy. It means “barnacle,” and refers to the ancient idea that the larval form of a goose whose far-northern nest no one ever saw was the large and prominent Gooseneck Barnacle. This tradition conveniently allowed Catholics to eat Brant on Fridays, because they counted as fish not fowl.

Our Brants’ prime East Coast winter range is the big salt marshes and bays of coastal New York and New Jersey. Thus, they alternate between Canada’s remote high Arctic wilderness, on short-grass coastal tundra, and structurally similar grassy salt marsh habitat adjacent to America’s densely populated eastern corridor. Unlike other opportunistic wild geese, they are mostly limited to coastal saline habitats, and thus were called “The Sea Goose” by writer Nelson Bryant. During the last two years, New Jersey Fish and Wildlife (NJDEP) and New York State Department of Environmental Conservation (NYSDEC) have tagged Brants with little solar-powered backpack transmitters, each weighing an ounce. Thus they can track their epic seasonal migrations. You can watch a great eight-minute video map of the Brants’ travels on YouTube. One southbound autumn Brant, newly arrived in the urban New York Bight, hung around (the Statue of) Liberty Island (LI) for some weeks.

Subscribe today to continue reading
Paul Spitzer, PhD, lived in the Connecticut River valley during his formative years as a naturalist and ecologist. He began his Osprey–DDT research as a student at Wesleyan University. He continued his doctoral research on northeastern osprey population biology at Cornell. He has accomplished conservation biology projects worldwide. He is currently finishing a book about loons.
Subscribe Today
\