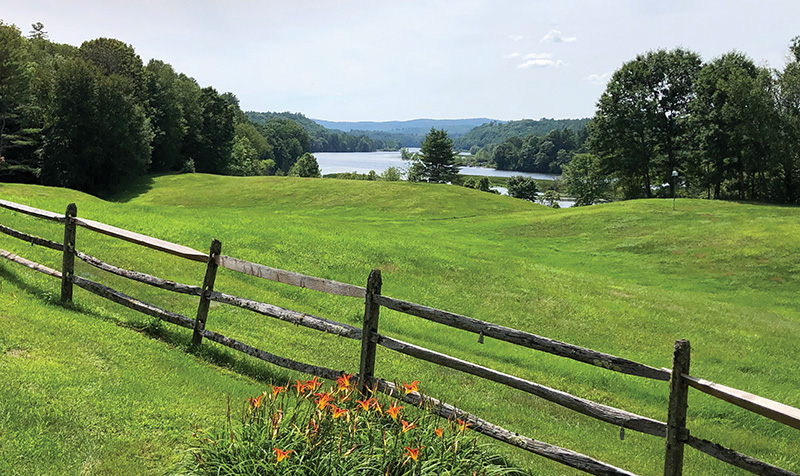 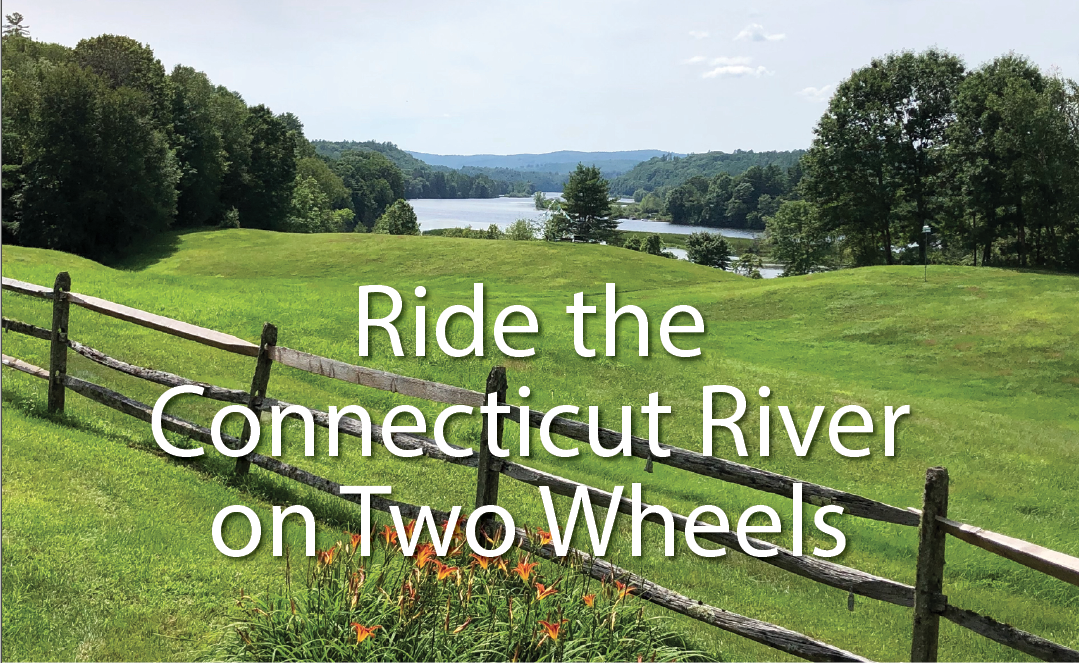 Story and Photos by Elizabeth Normen

My husband, Paul, and I love to explore by bicycle, and we love a water view. When you can combine the two, it’s a recipe for a great day out. The Connecticut River affords many attractive options. In this article, I describe one on the lower Connecticut and one in New Hampshire and Vermont.

This 12-mile ride is not long, but you’re well rewarded with options for fun places to stop and take in the historic sites and scenery. Park your car in downtown Chester and ride east on Water Street (Route 148) to the historic ferry landing for a quick ride across the Connecticut River. Be sure to look up along the ridgeline for a glimpse of Gillette Castle. You’ll be riding by there, so if you have time, stop in at Gillette Castle State Park for a tour of the castle and grounds. 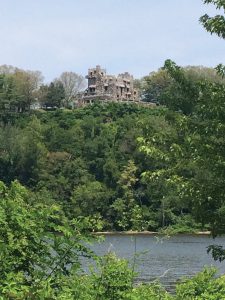 According to the State of Connecticut Department of Transportation’s website, the Chester-Hadlyme Ferry has been in operation since 1769. It was originally operated by Jonathan Warner who owned the land on both sides of the river. Warner pushed the ferry across the river using long poles; steam power was introduced in 1879. The ferry has been operated seasonally by the state since 1917. It costs $2 per pedestrian and bicycle to cross. Check the State DOT website for hours of operation.

Once on the Hadlyme side, head away from the river and take the left fork up the aptly-named Geer Hill Road. This side of the river is hillier, but trust me, if I can do it, you can, too. Geer Hill Road turns into River Road. From the ferry landing, ride just under a mile and an elevation rise of 150 feet to the entrance to Gillette Castle State Park.

Back on River Road, ride to the end and take a left on Town Road (Route 82). You’ve now achieved an elevation of 320 feet above sea level. In this next relatively flat stretch, there are a couple of stops worth making: East Haddam Historical Society with its fine collection of local and Lower Connecticut River Valley history (open weekends), Connecticut Landmarks’ Palmer-Warner House (check ahead as to whether it’s open), and Staehly Farm & Winery, which features varieties of apple wine and hard cider.

Watch for a left turn onto Ray Hill Road for a fairly steep downhill into East Haddam. At the end, take a left onto Norwich Road and make your way into town, stopping for lunch or a break on the outdoor terrace at the Gelston House, a historic inn and restaurant built in 1853. From here you’ll have a spectacular view of the Connecticut River, the picturesque Goodspeed Opera House built in 1876, and the East Haddam Swing Bridge. You’ve completed just under 7 miles— the most challenging of your ride, in terms of elevation gain.

After your break, ride over the bridge and up the hill on the other side to the intersection with Route 154. Take a left and 4.8-mile ride back to Chester. Route 154 is a busier road but relatively flat. Or you have the option to take a slightly shorter and quieter—but hillier—route: watch for a right on Dudley Clark Road to Old Chester Road to Goose Hill Road to return to your car, but you’ll climb to an elevation of 299 feet. Once back in Chester, take time to enjoy one of Connecticut’s most charming villages with shops, galleries, and restaurants to reward your 12-mile ride. 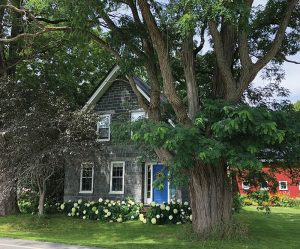 The Connecticut River is the border between Vermont and New Hampshire, so this ride takes you to two states and rewards you with long stretches of river views. This ride is a 21-mile loop, beginning and ending in the Dartmouth College-town of Hanover. We paid for parking in a town lot off Maple Street. Though you might be able to park for free at Kendal Riverfront Park—operating by Hanover Parks & Rec on Route 10 north of Hanover—read all the way through to decide if that makes sense for you.

From downtown Hanover, ride west on West Wheelock Street. Proceed with caution: this is a steep downhill to the bridge across the Connecticut River. Cross the river and take a right onto River Road/Route 5. You’re immediately on a nice stretch of riding along the river, and it’s quieter since this is a local road and parallels I-91. Hills along here are rolling, just enough to mix it up and keep your interest. You’re also riding parallel to the train tracks, but besides the river views there is plenty of scenic farmland to enjoy. As an option, watch for a right onto Kendall Station Road that takes you temporarily off and back on River Road.

Continue to East Thetford, Vermont, and watch for the right turn onto East Thetford Road. You’ll soon cross the historic Lyme-East Thetford Bridge back to New Hampshire. Take a minute on the 471-foot-long bridge to enjoy the view and that you’ve reached the halfway point.

The Lyme-East Thetford Bridge—a Parker metal truss bridge built in 1937 following a flood that destroyed the previous bridge—was listed on the National Register of Historic Places in 2020. (Fun fact, New Hampshire owns 86% of the bridge and Vermont owns 14%.) The bridge has been on the NHDOT’s “red list”—meaning in need of major repairs—since 2013. It looked like the project would start this spring—requiring the bridge to be closed from April 2022 to November 2023. A January 2022 news report, however, noted that the state had no bidders and that the project would be postponed until at least 2023. Best to check before you take this ride, as the next nearest bridge is Orford, New Hampshire, adding 16 miles to your ride.

After crossing the bridge, take an immediate right onto—you guessed it—River Road. A short way up, we encountered an unexpected fork in the road: to the left, a short but steep uphill on a newly built road, and to the right, the remnants of the old flat road. River Road had been closed here in 2015 due to concerns that this section of the road had been undermined by the river. Not knowing any of this, we debated whether we could still take the old road and bypass the steep hill. A couple out gardening in their front yard reassured us that we could still use it. We were grateful for the on-the-ground intelligence.

Climbing hills, though, is unavoidable on this side of the river, and as evidence that this loop is enjoyed by serious bikers, too, one such biker passed us—twice (ouch!). About five miles in, you’ll start up a steep hill to where River Road ends in an intersection with Lyme Road/Route 10. Sadly, this is just the teaser to the longest hill of this ride. The next stretch up busy Route 10 caused me to pull into the Kendal Riverfront Park and flop down in the cool grass in the shade of a tree for a breather. You can walk down the trail to the riverfront here, but I took a pass. The disadvantage to starting and ending your trip from this spot is you start on busy Route 10 and by winding your way through Dartmouth’s campus. On the plus side, you’ll split this monster hill, doing about a third of it at the beginning of the ride and two-thirds at the end. If you reverse the trip, heading to East Thetford on the New Hampshire side, you’ll have to cross busy Route 10 twice to make the left-hand turn onto River Road, and will still have a steep uphill into Hanover at the other end.

Continue on Route 10 into Hanover and watch for a stretch of bike path along the former Hanover Country Club property (closed by Dartmouth College in 2020). Choose your own route to cycle through campus and make your way back to your car. We rewarded ourselves with root beer floats from Lou’s Restaurant and Bakery on Main Street, but you’ll easily find a spot for a cold beer or glass of wine.