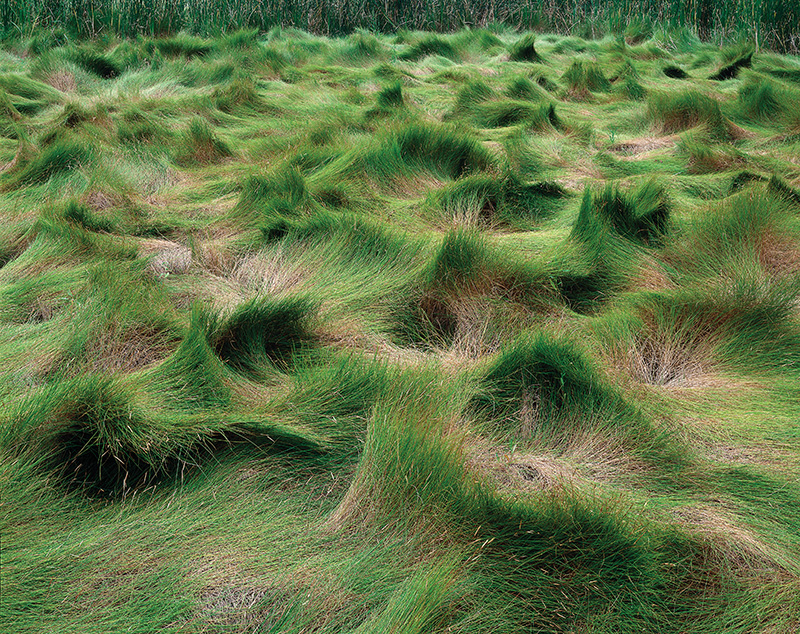 The BIG Camera
Story and Photo by William Burt

I had been leafing through the pages of his new book, Appalachian Wilderness (1970), and was not only awed, but mystified. Why did my own first efforts at this sort of natural scene photography have nothing of the quality I so admired in his?

I speak of course of the magisterial color work of Eliot Porter, whose procession of Exhibit Format titles had already seen In Wildness is the Preservation of the World (1962), Summer Island (1966), and now Appalachian Wilderness. My cameras had evolved from the Praktica of my teens to an Olympus FTL, and ultimately a slick black Canon F-1; and with this first class SLR I’d made a point of using a rock-solid tripod, cable release, and small lens apertures. So why should Mr. Porter’s photographs have been at once so vastly, incontestably superior—as if born of some other medium entirely?

Many elements were at play of course, not least of all the man’s vast knowledge and five decades of experience; but one factor dwarfed all others, and that was the yawning technical disparity between our camera systems and film formats. My instrument of choice was a mere 35mm SLR, and his a whopping 4x5-inch view camera.

A view camera? You know the type: old fashioned-looking, big and boxy, with extending bellows between camera back and lensboard. The more modern types are used primarily in commercial studio and architectural photography, but they were also long magnificently employed by Porter, Ansel Adams, and a coterie of others in portraying what remains of a wild North America. Through sheer film size alone—a 4x5-inch sheet has 15 times the real estate of a 35mm frame—it lends a scene so vastly more detail that you’d be right to see this big view camera work as an entirely different medium. And the camera is itself essentially an “optical acrobat,” as they say; for through its various movements (swing, tilt, rise, and shift) you can actually adjust the angle and position of both the film plane and lens axis.

So for serious photography, especially of receding “near-far” scenes—along the surface of a marsh or meadow, say, or up the trace of a descending brook—you merely tilt the lens or camera back to suit your subject angle, focus for the midpoint between near and far extremes, stop down the lens until you have sufficient depth of field...and Bob’s your uncle.

It’s not quite so easy, really; it takes time to get a feel for those big-camera movements and the spectral image on your ground glass screen (you read it underneath a focusing cloth, and it’s projected upside down and in reverse). And it takes time and lots of film to learn what makes or doesn’t make a photograph on that big sheet.

When I first put down stakes here at Old Lyme (now 50 years ago), my pressing business was to find and photograph its native marsh birds, and for the next half-dozen years or so I did, exclusively. But then increasingly my eye was drawn to the Spartina grasses, the toothed leaves of Silverweed, and other details of the marsh itself; and I knew what I had to do.

But those big cameras and big sheets of Ektachrome cost money. And the whole armamentarium of other gear required—a big 180mm Schneider lens in shutter, heavy duty tripod and film holders, focusing cloth, gel filters, a hand-fashioned pack in which to haul it all—it too cost money.

And there was one other thing: I’d never used a view camera.

So I did a little thinking, and decided on a plan. Before I dared spend my $500 (1975 price) for a big boy’s camera, I would spend a year in training, as it were: walking the woods and marshes with my little Canon as an ad hoc “view camera,” trying out a host of scenes to see what ought to play well on that bigger, broader rectangle, and in what kind of light, etcetera. And in this way, I fancied, I could be an Eliot Porter on-the-cheap: at roll film prices.

But when I first stumbled out into the field with my new hulking Plaubel view camera (and tripod, film holders, spotmeter, etcetera—I really should have had a donkey), there was still much to learn. My shutter speeds were now set not in hundredths or thousandths of a second but whole seconds, often tens of seconds; and my apertures were now routinely from f32 to f45, or even f64. And while I came to positively love the back tilt movement (rarely did I need the others), so did I soon come to dread the prospect of the merest breeze. Wind is the bane of all view camera work out in the field, where the least fraction-of-a-second whiff is the sure ruin of a long exposure in the making. After a few of these exasperating losses I made it my policy to pull the film and scrap such casualties at once, and at least spare myself the cost of film processing.

These long exposures being what they are, I scarcely need point out that a view camera is NOT the instrument of choice for natural-light photography of any subject that can run, hop, squiggle, creep, or fly (or for that matter, breathe). And if you need convincing, just imagine how much moving a live bird could do—or even the most lumpish turtle—during a ten-second-long exposure.

As with the threat of wind, so did I come to dread the hard clear sunlight of an open sky (although the waning sunlight of an early evening can be used to fine effect); and I soon found that far the best light source of all is the soft soaking glow of overcast skies, especially so after a rain. The cool cyan light of open shade, or “skylight,” is a distant second-best.

So I had much to learn indeed, and with the learning came no end of bungles, disappointments, and lost opportunities; though nothing quite lights up your eyes like those first big transparencies that bring the moment back and then some, and in such extraordinary detail. You might get only one or two of those for a month’s work, or two months’; but you can be sure that with each processed batch you will see more.

No question, that big camera made a world of difference in my own work with these “natural scenes” (is there no better phrase?), both in the marsh and out. But then the camera isn’t all—it’s just an instrument—and in the end, a photograph depends on both what’s there before the camera and behind it.

In the closing paragraphs of his last published book, in 1987, Mr. Porter wrote that “before all else a work of art is the creation of love, love for the subject first and for the medium second.”

Love for the subject first: that too had come through in those Appalachian photographs of his, which had so awed me years ago. I’m sure of it.