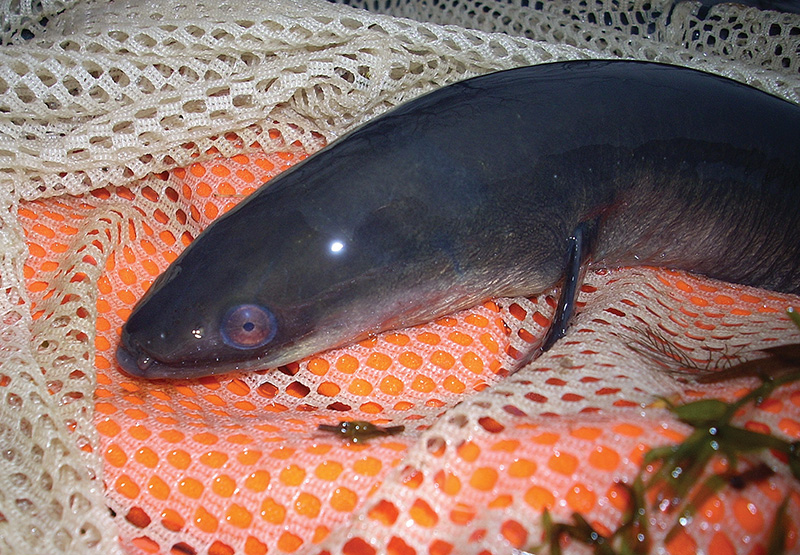 As an eel changes into its silver-phase , its skin gets shinier and its eyes get larger.

The “Silver” Eel
A Mysterious Fish

Story and Photos by Steve Gephard and Sally Harold

All summer long, one of the river’s longest fish has been preparing for a great spawning migration. Changing. Bingeing on food. Sexually maturing. As September progresses, the fish is ready but waiting. Waiting for the fall rains to come to trigger its migration. Even though it is one of the Connecticut River’s largest fish, very few people will witness its migration. While nature lovers are looking up at migrating swallows and hawks heading south, this mysterious fish will be heading in the same direction but unseen…below the surface. 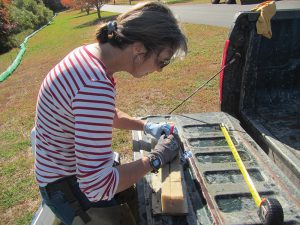 Sally makes a tiny incision in the belly of a trapped silver eel to insert a small glass tag that will help study eel movement around dams. This sedated eel, a small male, is enveloped in wet foam to keep it safe and still.

The American Eel, Anguilla rostrata, is our only catadromous fish. Instead of making its spawning run up the river in the spring like the American Shad and other anadromous species, it moves downstream to spawn in the ocean—the Sargasso Sea in the mid-Atlantic, to be precise. Some of this year’s migrants may have arrived at the mouth of the river about twenty years ago as glass eels, tiny transparent fish a bit larger than a horsehair. Fresh from the Sargasso Sea via the Gulf Stream, they moved into freshwater with a cloud of hundreds of thousands of other glass eels during the late winter and early spring. To the best of our knowledge, none of the very young eels had a distinguishable gender. But as they spread out and grew into larger eels known as elvers and then yellow eels, some became males and some became females. The eels in the lower river, especially in tidewater like around Haddam, Connecticut, are predominantly males, whereas the eels farther upstream both on the main stem river (like Brattleboro, Vermont) and in the headwaters of the tributaries (like the upper Millers River, Massachusetts) are predominately females. It is not known if the difference in migratory distances, time, and elevation above sea level, as well as population densities (there are more eels in tidewater than the headwaters), determine the sex of the fish or if the sex of the fish determines where in the watershed the fish settle.

Steve nets out trapped eels from the holding cage next to a Conte Eel Air Lift. The eels shoot out the top of a pipe behind the black fabric and fall into the cage.

Another difference between the sexes is their age upon their return to the sea. Males tend to return to spawn at a much younger age (five or six years?) and smaller size (less than sixteen inches), whereas the females may stay in the watershed until they are twenty or more years old and may be nearly a yard long and as thick as a man’s arm when they return to their place of origin—the Sargasso Sea. At this stage, they are referred to as “silver eels”—the maturing adult eel on the way to the sea. This is a bit of a misnomer because they are not truly silver, not like the young Atlantic Salmon smolt heading to sea or the adult American Shad returning from sea. But the previously greenish eel has developed a darker back, a creamy white belly, and has a sheen to it as if covered in a light coating of oil. All of this, of course, is about camouflage—changing their colors to best protect them in the environment in which they swim. Even their eyes have changed during this final life stage. They are now much larger.

Because these fish have been building up energy reserves much like a bear fattens up for winter hibernation, the silver eels possess a thick fat layer under their skin, and this makes them a valuable food resource. Humans have long realized they are perfect for smoking, which preserves the flesh longer. Native Americans used to build stone weirs in rivers to intercept them and historians advise us that the local Indians probably did not provide the Pilgrims with wild turkey at the first Thanksgiving but clearly did bring smoked eels. Changing tastes—and therefore less demand—and more restrictive conservation measures to protect a diminishing population have resulted in no more silver eel fisheries in the Connecticut River. In fact, the only truly sanctioned silver eel fishery in the US is in the Delaware River watershed. 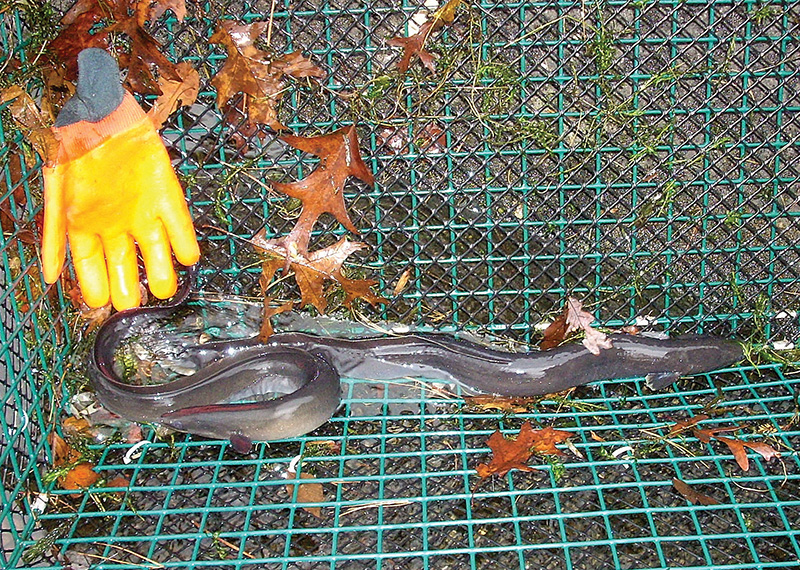 Two silver eels caught in a trap used to test the effectiveness of a bypass around an intake.

Even if they are not being fished, there are still hazards for migrating silver eels. They follow the river current downstream, and sometimes that current guides them into dangerous places, such as the intakes of hydroelectric powerhouses at dams. Large grates called racks, cover the intakes to prevent logs and other debris from passing into the turbines. The gaps in the racks however are large enough to pass silver eels, and once they reach the turbine, they have to pass through tightly spaced vanes that can spin faster than 150 revolutions per minute. It is nearly impossible for a thirty-inch fish to make it through unscathed. The mortality rate of these pre-spawned adult eels is frighteningly high. Regulators involved in licensing hydroelectric projects now have standards that are set as permit conditions to protect eels, such as a maximum ¾-inch gap in the racks and alternative pathways to allow eels to bypass the turbines. Many facilities operating under older licenses issued prior to the establishment of these standards still kill many eels.

Another source of mortality is intakes for public drinking water supply reservoirs. During their upstream migration, young eels can climb over the wet dam during the rainy springtime. Water demands are highest in the summer and so, in the fall, when the silver eels leave, the reservoir level is below the top of the dam and the dam edge is dry. The eels migrate by sensing current and they are attracted to the flow entering the water treatment plant, thinking it’s the river heading to the sea. Their choice leads them to a certain death.

During our previous careers (Sally with The Nature Conservancy and Steve with the Connecticut DEEP Fisheries Division), we collaborated with water companies in Connecticut and the noted eel expert, Dr. Alex Haro of the Conte lab in Massachusetts, on implementing and testing alternative measures at drinking water reservoirs to protect eels from these intakes. One of the most exciting developments in this field is the so-called Conte Air-lift, a device developed at the Conte Lab and perfected and tested by Alex and colleagues at the DEEP, such as Tim Wildman. It is a vertical pipe set into the reservoir into which compressed air is introduced at the base (where the eels are). The swift, induced water flow surging up the pipe is recognized by migrant eels as “downstream,” so they enter the pipe and are transported to the top of the pipe at the reservoir’s surface and into a holding pen from which they can later be safely transferred and released downstream of all dams.

As the September rains come, stream flows are increasing, and the water temperature is dropping. Large female eels from places like Bethel, Vermont (White River), Keene, New Hampshire (Ashuelot River), Cummington, Massachusetts (Westfield River), and Riverton, Connecticut (Farmington River), leave their home streams and, each night, slide over rapids and drop over small dams as they head to the Connecticut River. As they near the River they start to encounter hydroelectric dams. If there are protective measures in place, they zip around the dams. If not, hopefully they will drop over the spillway into a pool below the dam. Once all of the eels are below the Holyoke Dam in Massachusetts, they are beyond most human threats. The eels are large enough to avoid most predators, including large Striped Bass. After they reach the brackish mouth of the river at Old Saybrook/Old Lyme and pass through Long Island Sound, they disappear into the huge deep Atlantic, where precious little is known of their migration. It will be a sprint. They need to reach the Sargasso Sea in time to rendezvous with the rest of the clan by December. Connecticut River eels may spawn with eels from the Potomac River or the Penobscot River. Their offspring have no predetermined home. The glass eels that arrive at the Connecticut River mouth months later had parents that could have come from anywhere along the North American East and Gulf coasts, and their selection of our river as their home is random. After the adults have spawned, they will die, feeding the marine ecosystem. These fish are not only mysterious and incredibly interesting, but they are an important food source for other animals at all stages of their lives. We may not see them, and we may not fully understand them, but they need our protection.

After we submitted this column, we learned of the passing of David K. Leff of Collinsville, Connecticut. David was a contributor to this magazine and a well known poet. I got to know him when he was the Deputy Commissioner of the Connecticut Department of Environmental Protection (DEP), and he fought energetically to protect open space and rivers. I paddled several rivers with David as we strategized on projects. He was an attorney, public servant, poet, conservationist, hiker, naturalist, and lover of fish and rivers (particularly the Connecticut River’s largest tributary, the Farmington River). He will be missed. R.I.P., David. —SG