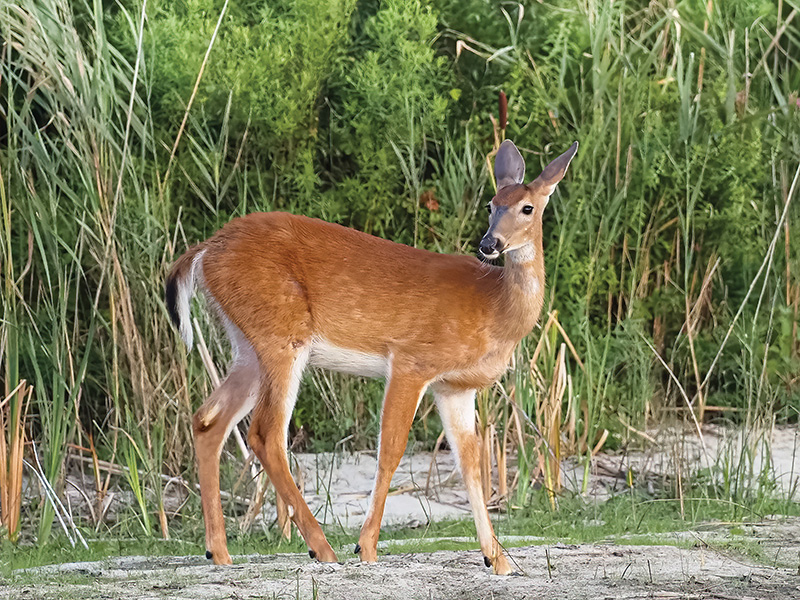 In Awe of White-Tailed Deer

A "Keystone" Species
By Bill Hobbs

Years ago, I had a close encounter with a big antlered buck, or male white-tailed deer, that I will never forget. It was the kind of experience where I got so close, I could see fear in the animal’s eyes and hear it snorting, as it broke loose from a thicket on the edge of our property and bounded past me.

What precipitated this situation was my faithful companion, a large, standard poodle named Blackie, who, unbeknownst to me, had chased the buck into the thicket and cornered it. She was an expert woodchuck hunter, so I figured my dog was in hot pursuit of another woodchuck, and I didn’t think she’d come out of the thicket anytime soon.

Then suddenly, charging out of the underbrush came this huge—I guessed—250-pound buck, struggling to free itself from the brambles and brush. And all I could do was stand there, transfixed, as this beautiful beast swept past me, leaving me and my dog in awe.

Ever since that experience, I have had the utmost admiration for white-tailed deer (Odocoileus virginianus), who are native to the Connecticut River Valley and much of North America. Mind you, this is an antelope-like animal that can sprint up to 30 mph, leap eight-foot-high fences, and sail gracefully through the air in 25-foot bounds.

Sourcing A Biologist
To learn more about these engaging animals, I turned to Becky Fuda, wildlife biologist and Deer Project Leader for New Hampshire’s Fish and Game Department. Here are highlights from our discussion: 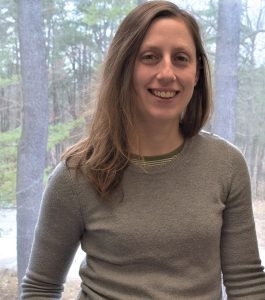 Fuda said when fawns are very young and alarmed, their heart rate drops, allowing them to stay still and calm and hide from predators, rather than flee, which is the exact opposite of what you and I might feel in a similar situation. She also noted how scientists now believe that a large pair of antlers atop a buck’s head not only helps that animal duel with other males, but more importantly, serves as a “signal” or sign of male health and good genetics to does, or female deer, during mating season; and that white-tailed deer are susceptible to catching the SARS-CoV-2 virus, the same virus that causes COVID-19 in humans. In fact, white-tailed deer have tested positive for this virus in 29 states, including two states in New England: New York and Pennsylvania.

“We still have a lot more questions than answers about COVID and deer,” Fuda said, adding that preliminary tests, thankfully, are showing the virus does not yet appear to be harmful to deer. However, she said, “They readily spread it from deer to deer,” prompting me to ask: “Can the virus jump from deer to humans?” Her response: “That is the big question that remains to be seen.”

Role of a Deer Project Leader
As Deer Project Leader, Fuda is a busy lady. Among other things, she’s responsible for summarizing and publicizing harvest data from the state’s deer hunting season, which runs roughly from October to December; investigating reports of sick deer; conducting field or lab necropsies to determine how a deer died; making sure registration or check stations across the state have necessary supplies; and managing special “island hunts” in places like Lake Winnipesaukee, where overpopulations of deer have damaged forests. I peppered her with more questions:

“They are the most widely distributed member of the deer family in North America, stretching across Southern Canada, most of the US, down through Mexico.”

Why are they important ecologically?

Since white-tailed deer are so abundant, Fuda said they are an important prey species. They are also a “keystone” species, meaning white-tailed deer have an “outsized impact” on many different species in the ecosystem. “For example,” Fuda said, “maples are a preferred browsed species that deer feed on. So, if you were in an area that had too many deer, you might see mature maples (thriving). But if you look on the ground, you might not see any regenerating maples.” Why? The deer are eating all the leaves off the new maples, killing them.

What’s the current population of white-tailed deer in New Hampshire?

“They’re social,” Fuda explained. “They don’t occur in large herds, like caribou or elk, but in smaller groups. That is, a doe will tend to associate with her fawns, and fawns from previous years will usually establish home ranges in the same area as their mother.” And the bucks? “Bucks will either associate with other [bachelor] bucks, or they’ll become solitary during the breeding or ‘rutting’ season [October to December], when they’re out, looking for receptive does.”

What do they do during the day?

“White-tailed deer are crepuscular, meaning there are active from dusk to dawn, and they might bed down during the day. If the weather is bad, they might hunker down. For example, during the winter, deer like south-facing slopes (to sit tight on) because the sun will melt the snow off those slopes. They also like little knolls to bed down on, where they can keep an eye on approaching predators.”

How long will a fawn stay with its mother?

“Fawns are born in June and stay with their mother until the following year. But when that doe has her new fawn, she will temporarily drive off her old fawns, while she gives birth to the new one.”

How big do bucks get?

“Male white-tailed deer can get very big,” Fuda said. For instance, in 2021, the largest adult buck, harvested during the state’s deer hunting season, was 255 pounds, field dressed. “Live weight, that animal would weigh over 300 pounds,” she said.

What is the average life expectancy of a white-tailed deer?

Can a coyote catch a white-tailed deer?

“They’ll get the young and infirm. But it would be rare for a coyote to catch a healthy, adult white-tailed deer. They’re too fast and evasive.”

What can we do to help protect and conserve our populations of white-tailed deer?

“I think the most important thing, as with most wildlife species, is to preserve habitat, whether that’s maintaining open space, or participating in habitat improvement projects. We’re lucky that here in New Hampshire, we have a thriving deer population right now.”

Bill Hobbs writes a nature column for the “Times” portion of The Day newspaper in New London, CT, and is a regular columnist with Estuary magazine. He can be reached for comments at whobbs246@gmail.com.