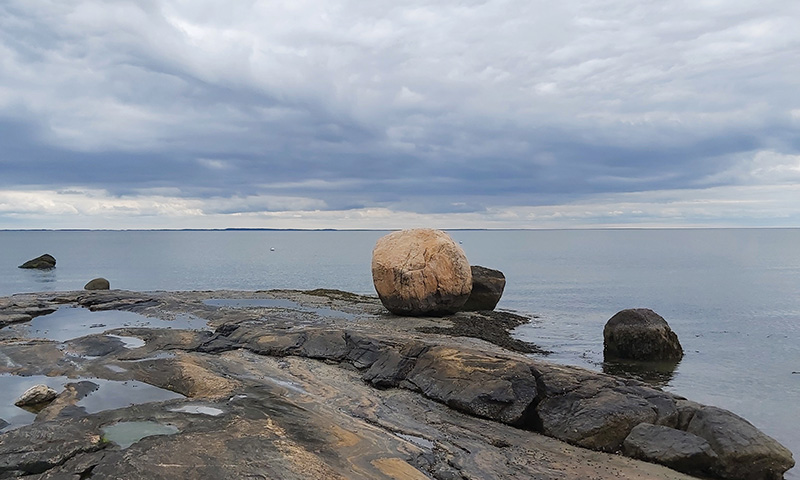 The Lost Continents of the Connecticut River

On a balmy spring day, I park in the small gravel lot of the Banningwood Preserve, part of the Lyme Land Trust, just south of Gillette Castle. Spattered with glacial detritus, it is an area of rocky dells and ridges, cut by Roaring Brook as it tumbles down toward Whalebone Cove on the Connecticut River. Red Oaks and White Pines march up the hill, with patches of hornbeams and black birch.

Jim Lampos pulls into the lot, with his long gray hair, boots, and denim jacket. We shake hands before walking up the ridge. Something of a polymath, Lampos is the owner and chef at the Groton Pizza Palace but has a master’s degree in Urban Affairs and Policy Analysis from the New School. Twenty years ago, you would have found him touring America as a singer-songwriter, and he enjoys eight stellar albums of folk-rock tunes to his credit. He and his wife, Michaelle Pearson, have also written four books on the history of the Lymes and are steeped in the natural and cultural history of the place they live. 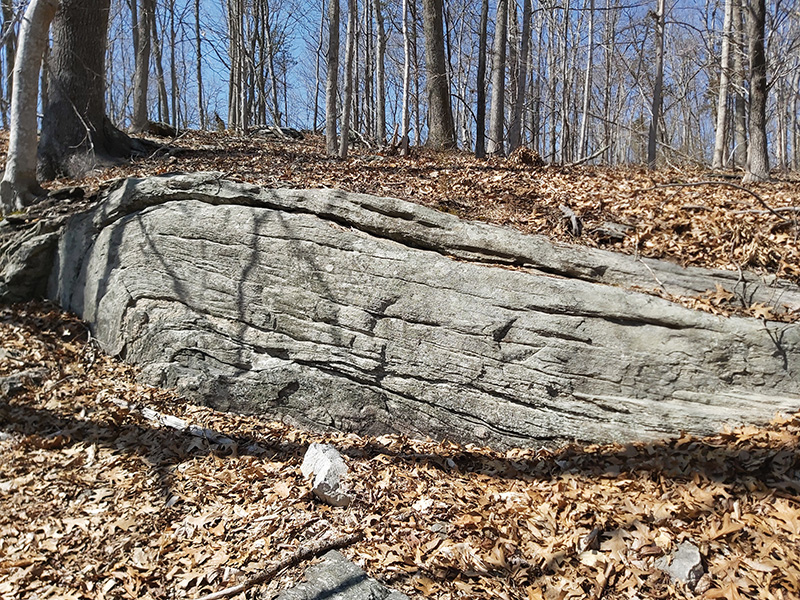 He is here to show me the Honey Hill Fault, sometimes known as the Lake Char Fault, the cause of earthquakes and the so-called Moodus Noises that frightened generations of local homeowners. At the top of the steep hill, we step off the path a bit so he can show me a section of exposed, literally bent layers of metamorphic bedrock. When the tectonic plates shifted 300 million years ago, the resulting pressure and heat folded this hard rock like paper. It is only one small part of the geologic heritage all around us.

“This whole ridge is a fault zone,” Lampos tells me. “Several continents collided 250 million years ago.” He points out that this section runs southwest to northwest, from the other side of the Connecticut River in Deep River towards Ledyard and then north towards Massachusetts. “That’s unusual in Connecticut, as opposed to the north-south traprock ridges.”

Before the dinosaurs existed, the collision of what are today the African and North American tectonic plates created this belt of broken rock, as the tiny continent of Avalonia was smashed in between them. Further fracturing of the bedrock occurred when they later pulled apart, forming the Atlantic Ocean, leaving pieces of its bedrock as far off as Poland. The glaciations that scoured New England over the last 2.6 million years have smoothed these outcrops down a bit, but not as much as I had thought.

Lampos and I walk to a wooden platform at Parker’s Perch, where the ledge is easier to see, dropping down to the brook almost two hundred feet below. “Avalonia is sort of wedged underneath the plate here, lifting it up,” he says. “We are really on the edge of North America, and everything to the south and southeast of this is another continent.”

There is a lovely waterfall tumbling down the fault, the water joining Roaring Brook below, which glitters in the afternoon sun. Stone walls snake along the peak of one hill, with large stones placed at cardinal points. Could they be Native American stone walls? Another mystery for another day. We follow the path down from the ridge past some glacial kettle holes and double back along the brook, where trout rise to gobble mayflies in the slanting spring light. To our right the rocky outcrops looked very much like every other local ridge, and only a geologist or a local historian would know it was the edge of an ancient land.

Geologists have made these determinations largely by studying the varieties of rock. The continent of Avalonia is often noted by the presence of pink granite. A former professor of geology at the University of Bridgeport, Dr. John Nicholas liked to show his students this unusual granite and point out this fascinating piece of history. “Imagine an old wound that healed,” he remarked. “Any tension or shifting rips the wound a bit and reactivates the fault.” That is the source of the Moodus Noises, and in recent years, the small earthquakes that have rumbled through the area. 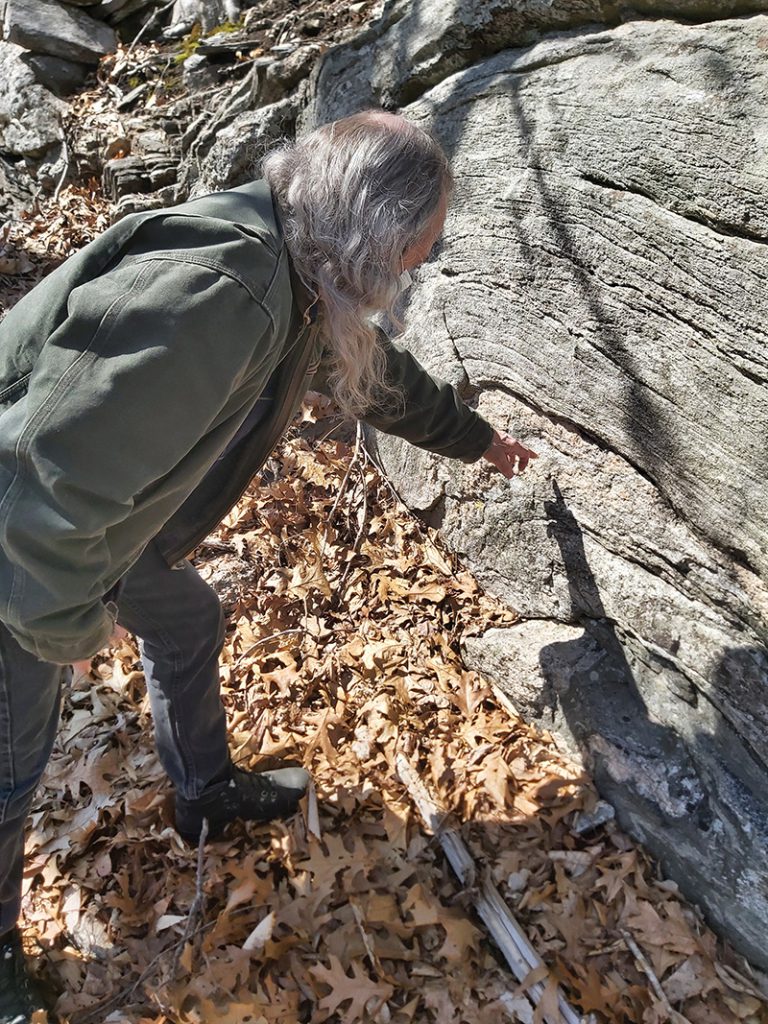 Faults have been increasingly easy to identify by geologists, and other evidence has been assembled using technologies like seismic surveys and radioactive dating. Paleontological fossil evidence brings in another layer of potential connections or separations. The theory of plate tectonics has been largely borne out by the synthesis of all this data, making the creation of approximate maps of the ancient past possible. The different plates have come together into giant supercontinents at least four times, along with countless other collisions, subductions, and frictions.

The Connecticut River Valley’s history in that sweep of time has been noteworthy. Geologist Richard Little noted that it is “one of the few places in the world where such diverse history can be seen in so small a geographic area.” Although the Laurentian or North American landmass dates back at least to the Precambrian, the valley itself dates back to that cracking apart of Pangaea, as valleys and basins formed with water flowing into the newly formed Atlantic. Mostly harboring lakes during the Mesozoic Era, this oxygen-rich basin left little evidence in the form of dinosaur bones, but much in the form of dinosaur footprints. Volcanos burst through the surface, creating the Holyoke Mountain Range. Those mountains suffered erosion, and in the Miocene Epoch, about ten million years ago, what is today the valley floor was pushed upward, and was in turn cut down by countless streams and rivers, particularly the one we today call the Connecticut. The modern river, though, didn’t emerge until after the most recent glacier retreated, a mere ten thousand years ago.

A few weeks later in Old Lyme, Lampos guides me down Hartford Avenue, past Kokomo’s Restaurant, and along a mostly empty Soundview beach. We can see west to Old Saybrook Breakwater Light and south to Plum Island and Orient Point. Jim explains that this is likely the first public beach in America, developed by socialist Harry Hilliard in 1892. Hilliard created it for the “unorganized general public,” meaning immigrants and other “undesirables” who were often banned from other beaches in the area.

But the history Lampos is taking me to see is much older than that. We leap from the crushed-shells and sand across a small brook and onto Saltworks Point, which is a raised piece of hard gray gneiss. Veins of pink feldspar, garnet, quartz, and mica have been turned vertically by geologic action and face the sky, giving the rock an otherworldly glow even on a cloudy day.

“You can find this same rock in Morocco,” he tells me. “The gray parts are over a billion years old.”

Sometimes called the “Lyme Dome,” this tiny piece of ancient rock is part of the microcontinent of Gander, which smashed into Avalonia 400 million years ago. That was long before Avalonia itself was crushed between North America and Africa. When those two plates pulled apart to create the Atlantic, pieces of this Gander archipelago popped up into the light again, most of them in Newfoundland and the British Isles. But this one small piece raises its head here in southeastern Connecticut, with a much larger portion diving deep under the glacial moraine of Long Island.

But what world was he speaking of? The seemingly static landscape of the Connecticut River that we see today is hardly a blip in the timeline of these rocks. The very ground we walk on is shifting, however slowly, and the great forces of the earth grind on, indifferent to our nomenclature and analysis. As I drive north and west from Gander and cross Avalonia, I realize that Jim and I live on different continents, give or take a few hundred million years.