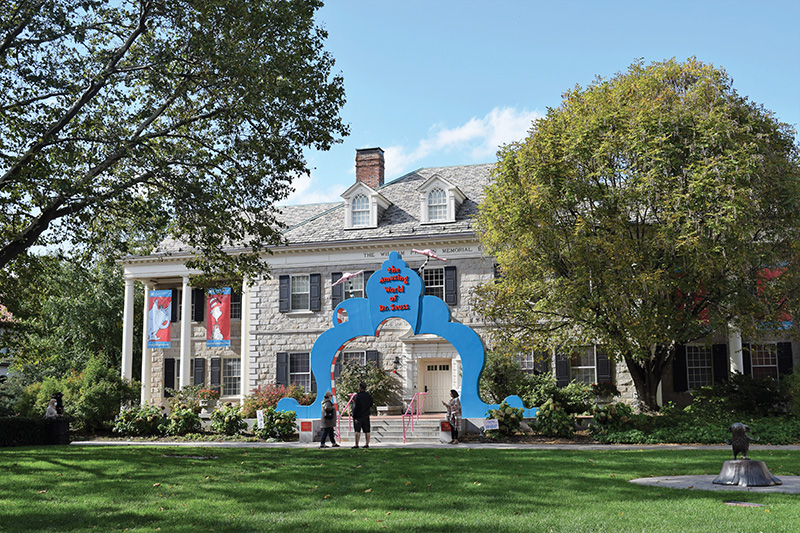 Entrance to the Amazing World of Dr. Seuss at the Springfield Museums.

The Art & Science of the Connecticut River

My wife and I arrive in the small metropolis of Springfield, Massachusetts, and amble our way through the transportation corridor, past the MGM Casino, and up the hill to the entrance of the Springfield Museums. Beyond a small café and an administrative building, four banners hang from the welcome hall portico: the Cat in the Hat, an Indian Motorcycle, a T-Rex, and a 19th century painting of a young girl by William-Adolphe Bouguereau. I couldn’t think of four more disparate images to represent one institution. How does literature, history, science, and art fit into one gallery? Into one day? 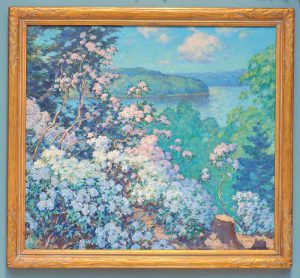 Hamburg Cove by William Chadwick, a painting from the George Walter Vincent Smith collection on display at the Springfield Museums.

The Springfield Museums mark their tentative beginnings over 160 years ago, with a small art and history collection. Originally housed in one room in City Hall, the exhibits moved into a new library building in 1871. Then in 1888, George Walter Vincent Smith and his wife Belle Townsley donated their impressive collection of international art, later housed in an 1896 Italian palazzo-style building. The science museum opened in 1899, with a collection of taxidermy dioramas in a classical revival building, and the Museum of Fine Arts opened in 1933, gathering paintings, sculptures, and the largest collection of lithographs in the country. In 2002, the Dr. Seuss National Memorial Sculpture Garden was added to the quadrangle, and soon the history museum moved across the street and the Amazing World of Dr. Seuss Museum opened in 2017.

The sum of all this growth is a staggering collection for a city the size of Springfield—a sort of mini-Smithsonian of five buildings with over 250,000 objects and more than one million archival documents and photographs. And much of that—much more than we expected—focuses on Springfield’s place on the Connecticut River. “The river matters a lot to us,” says Karen Fisk, the Director of Marketing and Communications Strategy at the museums, when she meets us in the entrance hall. “We want to help people live in that space.” She had just come from a morning paddle, so she knew what she was talking about. 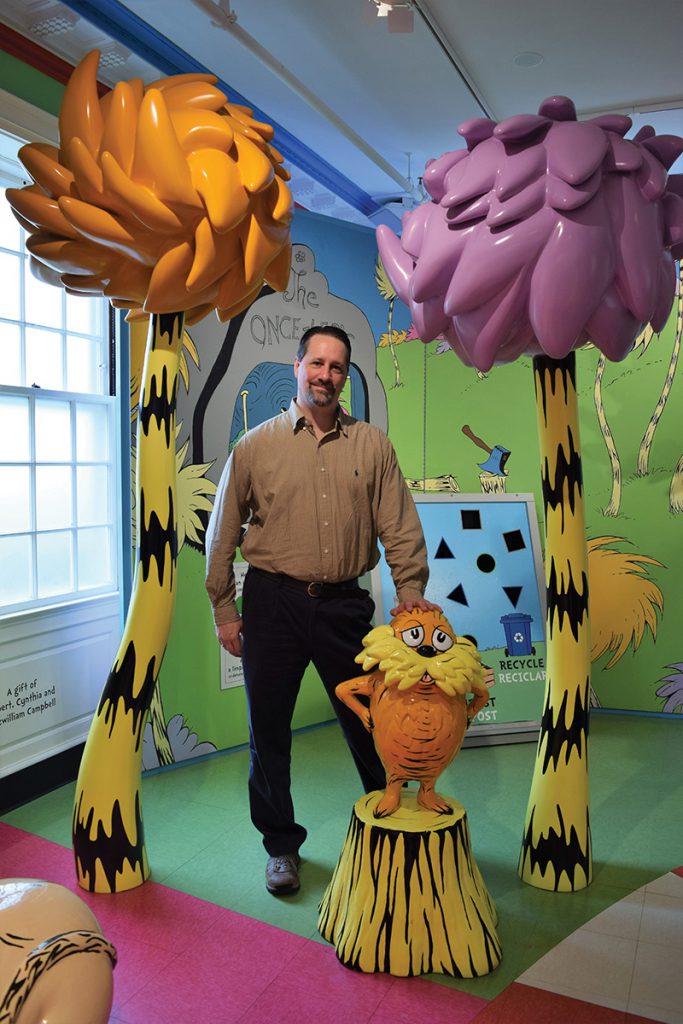 The author poses for a photo with the Lorax in the Amazing World of Dr. Seuss Museum at the Springfield Museums.

Fisk takes us downstairs into the Solutia Eco Center, a combination of live animals and dioramas with explanations of the riparian zone and watershed of the river valley. We browse the glass-walled displays of live reptiles, amphibians, and fish, all taken care of by an aquarist trained at Mystic Seaport. We spend quality time with a Hellbender Salamander, a Black Rat Snake, an Eastern Box Turtle, and a pair of endangered Shortnose Sturgeon. “We want a museum where people are interacting with the environment,” says Fisk, “to encourage them to love it and take care it.”

We find the first of a dozen maps of the Connecticut River basin here, accompanying the shells of yellow lampmussels and tidewater muckets. Upstairs in the dinosaur hall a map of fossils found in the Valley highlights the imprints of skeletons and tracks, while another chart details the underwater geology of the river valley. Further along is a large diorama and countless artifacts of the First Peoples of the Connecticut River Valley, reinterpreted with the help of Nipmuck scholars.

Beyond that we wander through a hall of mammal taxidermy dioramas from a century ago: moose and muskrat, fox and otter. Much of the taxidermy comes from the 19th century, though it was reworked in the 1930s and again more recently. The mission has been consistently updated, as well. Today, the Science Museum serves as a science, technology, engineering, and math (STEM) hub for Springfield, working with partners like the Silvio Conte Wildlife Refuge and sponsoring clean-ups, tours, and initiatives to bring people outside. STEM Pathfinders photos throughout the museum focus on inspiring women and people of non-traditional identities involved in science. “We use the Earth Optimism model from the Smithsonian,” says Fisk. “We focus on all the positive things we can do to help.” 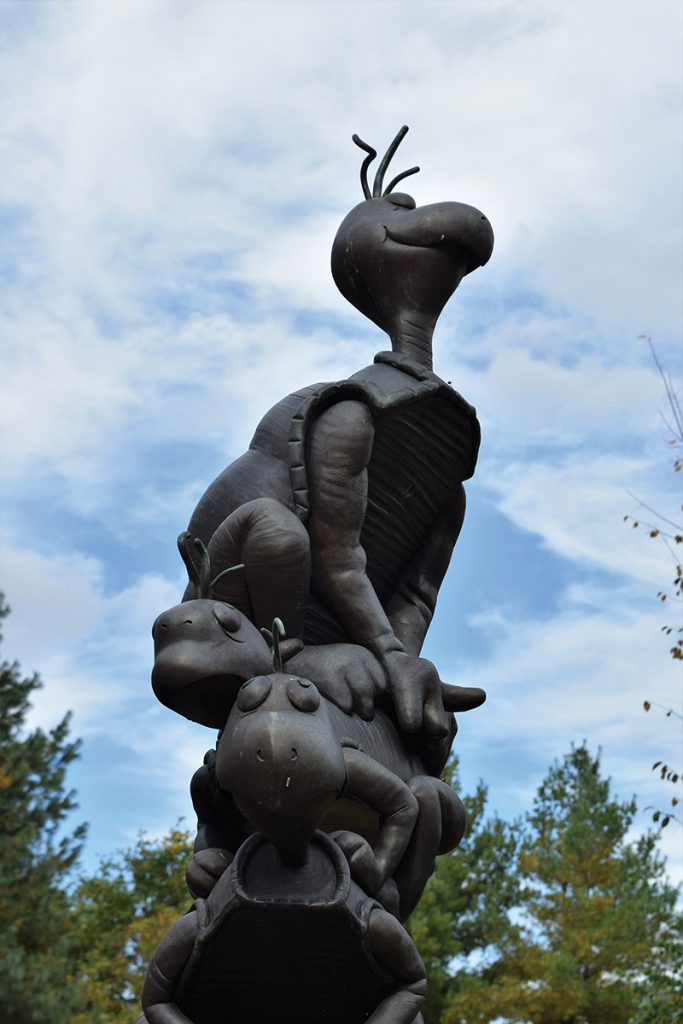 Outside in the long, grassy quadrangle between four museum buildings, a library, and a church, we find the bronze statues of the Dr. Seuss National Memorial Sculpture Garden. Crafted by his stepdaughter, Lark Grey Dimond-Cates, they include Horton the elephant, Yertle the Turtle, and the Lorax, who points the way to the newest museum, which features the children’s author’s work. When the Amazing World of Dr. Seuss opened in June 2017, attendance tripled during that summer. “People show up for Seuss, and they stay for the art and history and science,” says Fisk. “Even with Covid, we kept a steady flow of people into the museum. It shows we have an impact on people and how much Dr. Seuss has meant to everyone.”

The historic building is now full of interactive exhibits, rhyming labels, and life-sized figures of The Grinch and the Seven-Hump Wump. Surrounded by murals that precisely depict scenes from the books, adults walk around listening to audio tours in English, Spanish, and Chinese. Kids draw on a large touch screen, play in the bakery, and shout “oh, wow!” around every corner, screams of delight echoing through the colorful halls. “Sometimes, though,” Fisk notes reflectively, “you’ll find a parent just sitting in the corner reading to a child, and that is just as rewarding.”

Theodor Seuss Geisel was born in Springfield on March 2, 1904, in his grandparent’s home on Howard Street. The Geisels moved to 74 Fairfield Street in the Forest Park neighborhood when Ted was two years old, and it was there that he grew up. His mother’s family were bakers and his father’s family were brewers, but he followed neither trade, graduating from Dartmouth College in 1925 and becoming an illustrator and author.

His Springfield home often made it into his books, from street names to familiar sights from childhood. One of the most famous is the large Springfield Gasworks with its four tall smokestacks, which became the factory in The Lorax where the Once-lers knitted Thneeds, and that caused the extermination of the Truffula trees and everything that depended on them. It was the first children’s book written about the looming environmental crises facing the planet. “The Lorax has a lot to say about our current ecological situation,” says Fisk, making a clear connection to the science museum’s mission. Suddenly, I begin to see the wisdom of gathering these apparently unrelated collections.

Upstairs is a crazy collection of family heirlooms—hilarious letters and fictional mounted-animal heads on the walls. But in the stairwell is something more serious—a large panel detailing the historical context of Seuss’s cartoons, referring to the early sketches that now seem problematic to 21st century readers. It details his evolution not just as a writer, but as a human, where he “got tired of laughing at people” and “realized the way to change the world was to laugh with people.” The panel also cites his timeless parable of the star-bellied Sneetches, evoked by President Barack Obama as a symbol of human unity. “It’s not how you start that counts,” said Geisel. “It’s what you are at the finish.”

Next door, inside the more formal Michele and Donald D’Amour Museum of Fine Arts, we wander the stately halls to find View of Mt. Tom from the West (1884) by George Newell Bowers and John Roy’s computer-deconstructed Bridge to Sunderland (1996). A temporary exhibit called “Capturing Our Worlds: Works by the Springfield Photographic Society” includes Larry Sanchez’s Memorial Bridge (2016) of glowing lights over the river at night and Rosemary Polletta’s Breaking Dawn, Lifting Fog (2017) of ducks and grasses at the Fannie Stebbins Wildlife Refuge in Longmeadow. A dozen more photographs and paintings take estuary-minded visitors from Hamburg Cove to the Quabbin Reservoir. The river is at the center of life here, clearly, and this theme continues across the street in the Lyman and Merrie Wood Museum of Springfield History, where displays feature “Made in the Valley” highlights from the industrial revolution.

We wander the brick building, finding Springfield-made cars, motorcycles, and guns. Displays highlight the history of the Big Y, Friendly’s Ice Cream Parlor, and abolitionist John Brown. But there is too much to see in one day, and we do not have time to visit the George Walter Vincent Smith Art Museum. Luckily, this isn’t our first time at the quadrangle, and we have already enjoyed the Chinese cloisonné, American paintings, and Japanese armor on other occasions. But the superfluity of content makes us wonder again what made all these diverse exhibits work together.

Karen Fisk has a good answer for that. “The museums are all about increasing our literacy,” she says. “And literacy is not just how to read, it is how we connect words to pictures, pictures to the landscape, the landscape to us. It is really earth literacy.” I mention that such a broad view seemed to be a daunting task, even for a comprehensive institution like the Springfield Museums. “We see the growth of literacy as a multi-generational thing,” Fisk answers. “We have people who have come to the museums as children, who are now coming with grandchildren. We can have impact over not just one lifetime, but many.”

It seems strange at first—the portrait paintings and the dinosaurs, the Indian Motorcycles and the Cat in the Hat. How can all this be connected? But as soon as you step back to take a wider view, the connections start to make perfect sense. Those different colored threads are knitted together like a strand of cartoon DNA: art and science and history and literature. Each of them alone offers an incomplete vision. Together, they provide a necessary and planetary literacy to understand our civilization, to protect our land and water, and maybe even to love the place we call home.