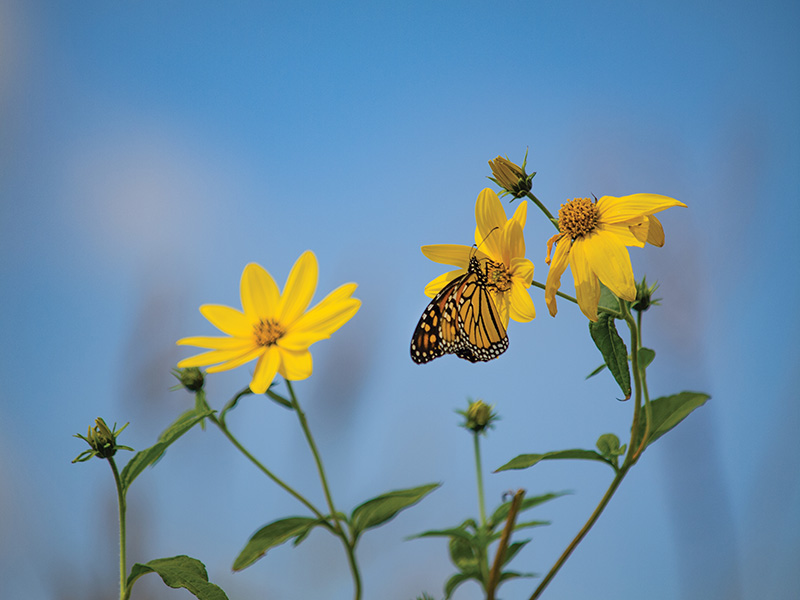 Soaring over our verdant summer meadows, monarch butterflies are a sublime slice of an amazing life history. From June through August, we watch two generations multiply here on milkweed. They incorporate milkweed’s toxins as protection from bird predators. We admire their beautiful caterpillars and enjoy the annual restoration of their numbers—which is essential to the species’ survival. But the freezing temperatures of autumn and winter would kill all four stages of their life cycle: egg, caterpillar, chrysalis, and butterfly. So at summer’s end, we witness a migratory river of departing monarchs, flowing along the Connecticut coast. These monarchs form a southbound “Ebb Tide”: three or four generations, averaging roughly six weeks each, have multiplied since the remnant of winter survivors returned to the southern US, on spring migration from their forest sanctuaries in the high mountains of central Mexico, roughly 2,500 miles away. Over the warm months, they have advanced to New England and Canada, and increased a thousandfold. Monarchs’ thousandfold annual variation in numbers is a classic insect life history, with potential for such multiplication. Now, as the replenished monarchs return south—in seasonal peak numbers—they will be concentrated by the wide waters of Long Island Sound and the Connecticut River’s mouth. When flight conditions are unfavorable, they will cluster into night roosts on the river’s East Bank.

Our scientific interest is how these vulnerable yet tough butterflies make their long passage to Mexico, minimizing mortality. Their migration behavior adapts to daily and seasonal weather events. This caught my attention in the stable weather of 2019, when I witnessed a coastal Connecticut “river of butterflies” for days in September. By contrast in 2021, New England saw tropical storm deluges from August 19 onwards into September: bad butterfly weather. A mass of monarchs departed early, leaving only a light trickle for the rest of the month. Monarch wings are strongly “hydrophobic,” adapted to shedding the water of dew and rain—but there are limits. So we cannot predict the migration’s size and duration in 2022, though a plentiful “river of butterflies” is likely, with some days of great abundance.

Classic ecological science has focused on monarchs’ defense against predators and on their long-distance-flight energy budgets. These are wondrous and related stories. The butterfly’s firm abdomen is filled with lipid, which they use to energize flight and other activity. This energy storage and respiratory organ is essentially their gas tank. In the winter of 1979, I spent many fascinating weeks at 10,000 feet in the Sierra Madre of the Mexican state of Michoacan, watching limited predation by two bird species—orioles and grosbeaks—on dormant wintering monarchs, which had no escape capacity. The Black-backed Orioles at the Mexican wintering sites are a close relative of our Northern Oriole. They use their slender, pointed “surgical” bills to slice open the monarch abdomen, feeding on the rich bright yellow lipid within. By doing so, they avoid the processed milkweed cardenolide toxin which is stored in exterior cuticle tissue. (This repository keeps the toxins from interfering with the monarchs’ own physiology.) The other major bird predator, the big-billed Black-headed Grosbeak (the western relative of our Rose-breasted), proceeds differently, consuming the whole abdomen. It has more tolerance of the poison, but I watched feeding grosbeaks “mouth” monarchs, releasing many unharmed—which suggests they can taste-discriminate those with less toxin load. Small flocks of each species would visit the roost, but probably were not using it as a sole food source, and did not significantly deplete the great masses of butterflies. Such intermittent partial feeding to avoid excess toxin load is known as a “cafeteria” strategy, common in many vertebrates.

Researchers have also thought long and hard about the monarchs’ energy budget on their long flight south. Their lipid-filled abdominal “gas tank” can be refilled by drinking the nectar of various flowers en route. They can convert those imbibed sugar compounds into stored lipid. Thus our late summer blooms of Seaside Goldenrod and woody Baccharis “Groundsel-bush,” so avidly visited by the migrants, provide a series of fueling stations that extends down the Atlantic Coast and can be watched daily at Griswold Point in Old Lyme, Connecticut.

The monarchs’ migration flight is an exercise in energy conservation. Their wings are solar collectors, catching the day’s sun energy to elevate their body temperature to an efficient working level. Flapping flight consumes much stored lipid energy, so they minimize it. They glide and soar, using wind energy from behind or the side, which enables them to “tack.” Once they reach the faraway, high elevation Mexican mountains, mostly beyond the freeze that would kill them, they ascend to 9–10,000 feet. There they form large baglike clusters, hanging on the branches of 80'-tall Oyamel fir trees, which grow in deeply incised valleys with cool, stable temperatures and some humidity. In these quiet alpine valleys they remain still and dormant for the winter months, conserving their remaining store of lipid energy. Eventually they will need water. When they break dormancy at winter’s end, a golden river of butterflies flies gently down to a nearby spring to drink, turning its banks to “Monarch Gold.” Here I beheld my “Treasure of the Sierra Madre”! I stood below the colony on a sunny morning in early March, extending my arms while hundreds of monarchs flowed gently past them. Then on Palm Sunday, I watched from the central plaza (zocalo) of a mountain town downslope, while the departing monarchs streamed over the churchgoers. But consider: There can also be extraordinary September days at Connecticut coastal locales where naturalists experience a southbound version of this monarch abundance.

This long-distance migratory life history is a miracle of evolution which conservationists are striving to preserve. Monarchs’ saving grace is their insect capacity to rapidly rebuild their numbers. Thus the high butterfly birth rate in our fertile northern meadows is an essential summer springboard for monarch survival. Elsewhere, there can be major mortality events. A long, hard drought in 2010–2014 on their flight path through Texas and beyond is thought to have deprived them of nectar and water. Even cattle were dying, so it probably became a lethal passage for many monarchs. In the Mexican alpine winter habitat, uncommon but harsh weather events of ice and storm can kill droves. When I was there, there were windrows of fallen storm-killed butterflies on the forest floor. But my concern was tempered by my understanding of the butterflies’ great reproductive capacity. In contrast, I had recently been studying an endangered—and soon to be extinct—remnant population of Siberian cranes that wintered in India. Whenever just one died, it was a tragedy. The potential monarch tragedy in Mexico is actual destruction by logging of their very limited high elevation forested valley habitats. Some of these forest sanctuaries have been carefully preserved since they were discovered in the 1970s, but this requires constant attention and negotiation, so that local people derive the necessary economic benefits and dignity.

Fortunately, the adaptable and widespread monarch has much simpler ecological arrangements in frost-free Central America, where it has no need to migrate and feeds on the native (and toxic) milkweed, Asclepias curasavicca. And: The larger story takes a grand evolutionary turn in south and east Asia, where a closely related butterfly of the same Danaine subfamily, with a fair resemblance to the monarch, has populations extending from south Asia to Japan. This “Chestnut Tiger” feeds on toxic milkweed relatives, and makes a grand autumn migration down the Japanese archipelago to avoid freezing winters. The butterfly’s Latin name is Parantica sita—originally named in India after the noble, venerated Hindu goddess Sita. As Darwin said: “There is grandeur in this view of life.” 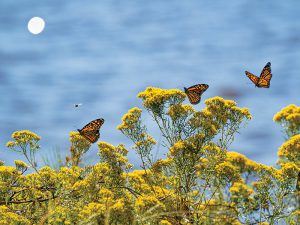 For a month at summer’s end, August 25–September 25, I will host a Monarch migration watch and study at Griswold Point (in Old Lyme, CT). This will also include observation of the grand seasonal abundance of coastal birds and plants: ospreys, terns, shorebirds, egrets, migrating raptors, and swallows, and the blooming and seeding of beach and marsh plants. This ecological overview of the Connecticut River estuary will be a daily “salon,” a small group (4–5) devoted to observation and discussion. Interested people should e-mail me at paulmonarchs@outlook.com for details. A few larger guided groups (10–12) will walk down from the parking lot at White Sands Beach, Old Lyme, which is open to the public after Labor Day, September 5.

Our daily watches will concentrate on prime butterfly flight hours, from late morning through afternoon.

But we will also adjust to tidal cycles, enabling access to adjacent tidal flats and Griswold Point shoreline habitat.