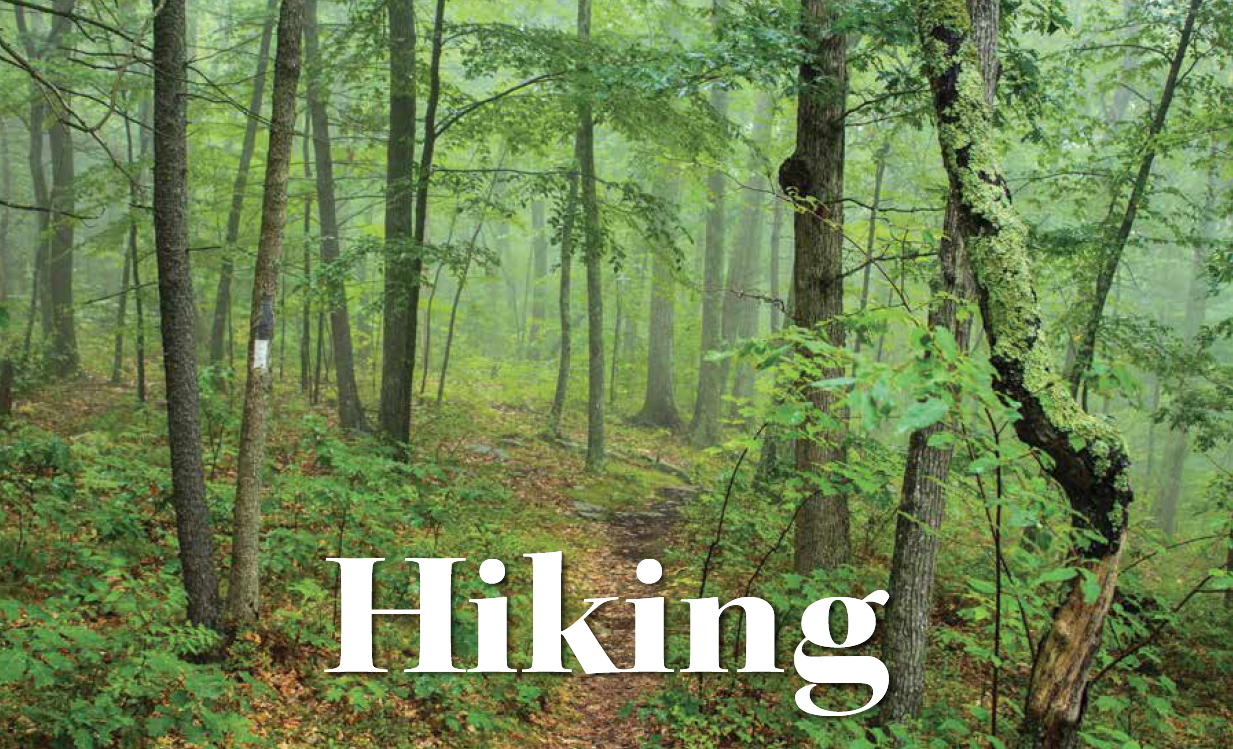 the New England Trail over Mr. Tom
Story and Photos by John Burk

Formed by ancient volcanoes some 200 million years ago, Mount Tom’s summit ridge is one of the most unique and spectacular natural areas of western Massachusetts. On this clear spring morning, long views to the distant Berkshires and southern Green Mountains unfold from sheer cliffs and distinctive red-hued basalt formations. I’m making a traverse of Mount Tom and the Holyoke Range—prominent landmarks of the New England National Scenic Trail (NET) in the heart of the Connecticut River Valley—with several dedicated volunteers whose efforts are crucial to maintaining and improving the trail.

The NET, established in 2009, is one of eleven federally designated National Scenic Trails in the United States. Three historic long-distance trails—the Metacomet-Monadnock Trail in Massachusetts and the Metacomet and Mattabessett trails in Connecticut—collectively form the 215-mile route, which extends from Guilford, Connecticut, to the Massachusetts-New Hampshire state line (a twenty-mile segment to Mount Monadnock in southern New Hampshire is not part of the federal trail). University of Massachusetts botany professor Walter Banfield and a group of volunteers created the M-M Trail during the 1950s as a 115-mile route from the Connecticut Valley to Mount Monadnock.

After a steep but quick ascent to the ridge from the NET crossing on Route 141, we reach Mount Tom’s 1,202-foot summit. It’s the highest basalt peak of the Metacomet Range, a 100-mile long chain of mountains and ridges that extends from Long Island Sound through the upper Connecticut Valley of Massachusetts. Geologists regard these eminences, which serve as the basis for much of the NET, as some of the world’s best-preserved examples of historic volcanoes. An old foundation marks the former site of the Mount Tom Summit House, an elaborate hotel built at the close of New England’s nineteenth-century mountaintop resort era.

Proceeding north along the ridge crest, we pass by cliffs, knolls, rocky ledges, and twin high points known as Deadtop and Whiting’s Peak. A hang glider, launched from a west-facing cliff near the summit, soars along updrafts along the ridge. Scratches on exposed basalt are evidence of glaciers, which shaped the ridge during the last ice age. A long swath of regenerating forest on the slopes below is the legacy of a much more recent natural disturbance, a powerful microburst that blew down thousands of trees within a matter of minutes in October 2014. 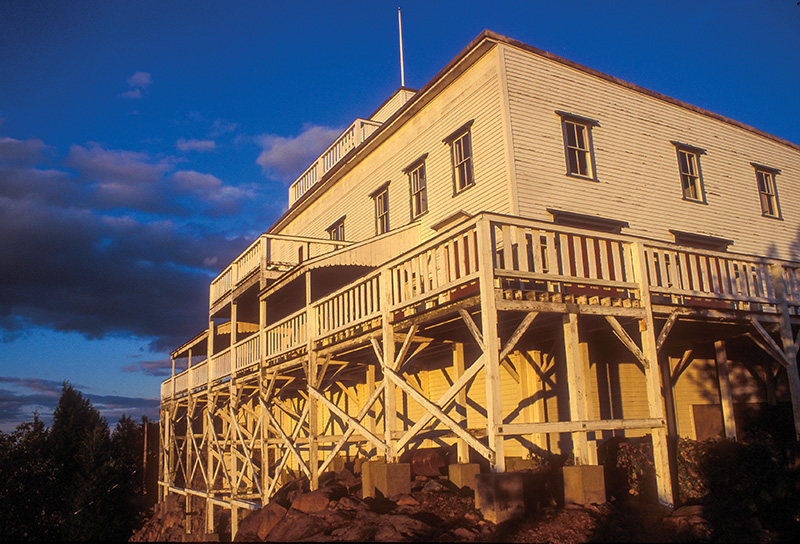 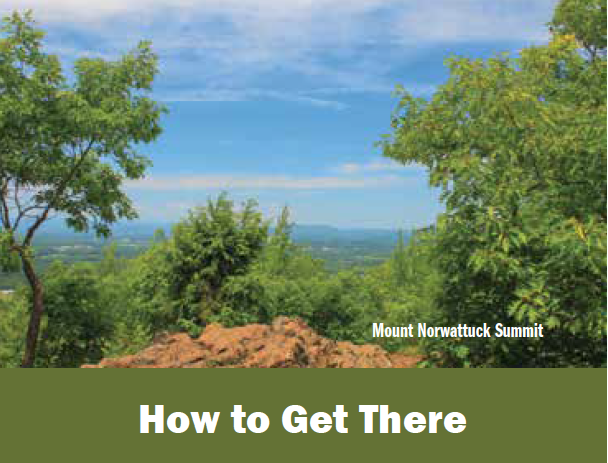 Skinner State Park (Mount Holyoke)
Website: mass.gov/locations/skinner-state-park
Directions: From Interstate 91 in Northampton, take Exit 25 (northbound) or Exit 26 (southbound) and follow MA 9 across the Coolidge Bridge. Bear right on Bay Road and continue 1.3 miles to the intersection with MA 47 in Hadley. Continue straight on MA 47 for 3.7 miles to the state park entrance road on the left.

Mount Holyoke Range State Park
Website: mass.gov/locations/mount-holyoke-range-state-park
Directions: From the junction of MA 9 and MA 116 in Amherst center, follow MA 116 south for 5 miles to the NET crossing at the Notch Visitor Center.

A steep descent from Whiting Peak leads to a picnic area near the state reservation visitor center, built by the Civilian Conservation Corps during the 1930s. After enjoying a brief lunch and break from the rugged terrain, we begin ascending the north end of the ridge. Calls of warblers, thrushes, and other migratory songbirds echo through dense oak-hardwood woodlands, which provide a notable contrast to the higher, exposed cliffs to the south. The Metacomet Range’s diverse forests host a wide variety of plants and wildlife, and serve as a critical protected corridor for birds migrating along the Connecticut River flyway. Nearly 40 reptile and amphibian species have been recorded on Mount Tom’s ridge alone.

An observation tower atop 822-foot Goat Peak offers another fine perspective of the Connecticut River and the Holyoke Range on the east side of the valley, A mourning cloak, one of the first butterflies on the wing in spring, flutters around the edge of the rocky tower clearing. Several broad-winged hawks drift north along the ridge, which is one of New England’s finest hawk-watching destinations. Though prime viewing is during the fall migration period when southbound raptors may be visible by the thousands, as many as 1,300 have been counted at Mount Tom on spring days.

Near Dry Knoll, I pause to photograph a colony of pale blue round-lobed hepatica wildflowers, another sign of the changing seasons, blooming along the sunlit trail edge. These hardy members of the buttercup family are one of the first ephemerals—woodland wildflowers that emerge in the window between winter’s end and forest leaf out—to bloom in spring. From a bench at a rocky lookout, we enjoy a fine northerly perspective overlooking the Oxbow—a prominent horseshoe-shaped bend that was part of the Connecticut River main stem until being cut off by a flood in 1840—and adjacent fields and floodplain forests of Arcadia Wildlife Sanctuary.

At Mount Nonotuck at the northern end of the range, we make a short detour on an interpretive trail to the stone remains of another lost hotel, the former Eryie House. Built in 1861, it provided competition for the nearby Mount Holyoke summit hotel, with amenities such as a lookout tower, elevated walkways, an elaborate restaurant, and thirty guest rooms. After it burned in 1901—when a horse cremation by the property owner went awry—the property became part of Mount Tom State Reservation, one of Massachusetts’ first state parks. Leaving the ridge, we follow old carriage roads down Mount Tom’s north slope to the trailhead near the west bank of the Connecticut River.

The next day begins with a misty sunrise over the Oxbow. Mallard and wood ducks make early morning feeding rounds, and a bald eagle soars over the treetops. After spotting cars at both ends of the Holyoke Range, we begin a steady ascent of the Holyoke Range from the Hockanum Meadows on the river’s east bank, passing by “Titan’s Piazza,” a basalt outcrop with a southerly view of the valley. After two miles, we reach Mount Holyoke’s summit, one of the NET’s most popular and historically rich destinations. Its scenic views and visitor amenities have attracted hikers, tourists, and artists since the late eighteenth century. Decks at the Summit House, a former nineteenth-century hotel that has been restored as a state park visitor center, provide varied 360-degree perspectives across the Pioneer Valley. Tourists once rode a steeply inclined tramway down to the Halfway House on the north slopes.

Leaving the busy summit picnic area, we pass by colonies of bloodroot wildflowers en route to a less-known vista at Taylor Notch and a chain of minor peaks known as the Seven Sisters. Unlike most mountain ridges that run north-south, this portion of the Holyoke Range has an unusual east-west orientation, the result of complex geologic processes as the valley took shape millions of years ago. Though elevations are modest, topping out at roughly 1,000 feet, numerous rocky ups and downs add considerable elevation gain (and stress on the knees).

A steep climb out of the Low Place, a rocky saddle on the ridge, leads to a less-traveled peak named for esteemed nineteenth-century geologist and Amherst College president Edward Hitchcock, whose extensive research included many significant dinosaur track discoveries in the Pioneer Valley. In another mile we reach Bare Mountain on the west side of the Notch, a prominent gap that bisects the range. Hidden within its base is a relic of the Cold War, a concrete bunker built by the Air Force in 1957 as a secret command post for use in the event of a nuclear war. The facility, still off-limits to the public, now serves as a repository for local college libraries. Looking east across the Notch from a rocky lookout, I glimpse a large quarry that marks the former site of Round Mountain, a lost peak of the Holyoke Range that has been nearly obliterated by basalt mining since 1897.

A short, rocky descent of Bare Mountain’s talus slopes leads down to the Skinner State Park visitor center in The Notch. The parking areas are full to capacity, a reminder that the NET serves as a crucial protected corridor and recreational resource in a densely populated region; roughly two million people live within ten miles of the trail. The route also connects with many other trails and access points, providing a variety of options for explorers. Heading east from the Notch on a portion of the NET that overlaps with the 47-mile Robert Frost Trail, another fabled Pioneer Valley long-distance route, we pass backpackers with camping gear, families with young children, and groups of students from the Five Colleges.

More hepatica flowers, including pink and white varieties, line the path as we ascend the rugged slopes and traprock gullies of Mount Norwottuck, the Holyoke Range’s highest peak. Views from the 1,106-foot summit extend from the tall buildings of Hartford to the south to the ski areas of Vermont’s southern Green Mountains and the remote, densely wooded NET corridor to the north. Descending the upper slopes, we scramble by a jumble of overhanging rocks known as the Horse Caves. Western Massachusetts farmers reputedly used these ledges as a hideout during Shay’s Rebellion, the tax revolt that influenced the development of the United States Constitution. A nearby vista at Rattlesnake Knob, a minor peak at the base of Mount Norwottuck, provides an overview of the last segment of our hike.

A long day on the trail draws to a close with a last ascent of Long Mountain, the easternmost significant peak of the Holyoke Range. The 920-foot summit affords a fine perspective looking back west along our route to Mount Norwottuck and distant Mount Tom. After passing additional viewpoints on the summit plateau, we carefully descend the steep east slopes before finally reaching the end of the hike at a nearby roadside trailhead.