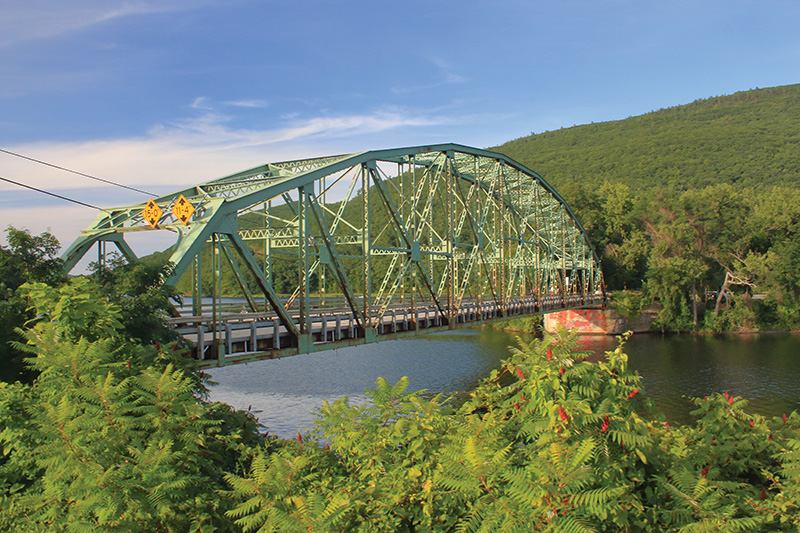 A greenway with historic bridges and an island park, community connections to businesses, social services, recreational trails, and revitalization of downtown Brattleboro, Vermont: these are among the many benefits associated with a long-anticipated new bridge at the Connecticut River Route 119 crossing between Brattleboro and Hinsdale, New Hampshire.

After many years of planning and delays, the initiative began in 2021 when the state of New Hampshire, which has jurisdiction of the crossing, awarded a $61.7 million dollar bid for construction of the new bridge to Reed and Reed General Contractors of Woolrich, Maine. When it opens to traffic, the current route, comprised of two venerable but aging bridges linked by Hinsdale Island, will be repurposed for pedestrians and cyclists.

Originally established as a private toll road in 1804, the existing crossing has been a crucial regional link for more than 200 years. In 1888, the towns of Brattleboro and Hinsdale made the route free and open to the public to encourage commerce and travel. After several wood, covered, and iron bridges washed out during the nineteenth and early twentieth centuries, the twin steel truss bridges presently in service (Anna Hunt Marsh Bridge and Charles Dana Bridge, at the western and eastern ends, respectively) were built during the 1920s. The crossing allows Brattleboro and Hinsdale to share emergency services and provides access to businesses, health services, and Interstate 91 for southwestern New Hampshire’s rural communities. Roughly half of Hinsdale’s working residents commute to Vermont, and the nearest crossing requires a seventeen-mile detour.

Hinsdale Island, a fragile slab of land in the river channel, was the site of farms, a brewery, and a saloon during the nineteenth century. It briefly became a popular regional attraction when Island Park, a large amusement complex that hosted baseball games, dances, concerts, movies, boat races, circuses, presidential rallies, and other events, opened in 1911. Construction of the nearby Vernon Dam in 1909 raised the river level, inundating much of the park and island within a matter of years, and the floods of 1927, 1936, and 1938 subsequently caused substantial erosion. Today the remaining 11.5 acres encompass a cottonwood-dominated floodplain forest, a large wetland on the southeast shore, and the roadway between the bridges.

Deterioration of the existing bridges, an ongoing problem since the 1970s, motivated the initiative to replace the existing crossing. Both structures have low clearances that no longer meet modern design standards, and trucks are unable to safely pass on the narrow roadways. Continued vehicular use would entail significant maintenance costs and potential restrictions and closures. Other considerations included pedestrian safety on the bridges and Hinsdale Island, and frequent delays and congestion (potentially affecting emergency responders) at a railroad crossing and five-way intersection on the Brattleboro side, ignominiously known to residents as “Malfunction Junction.” 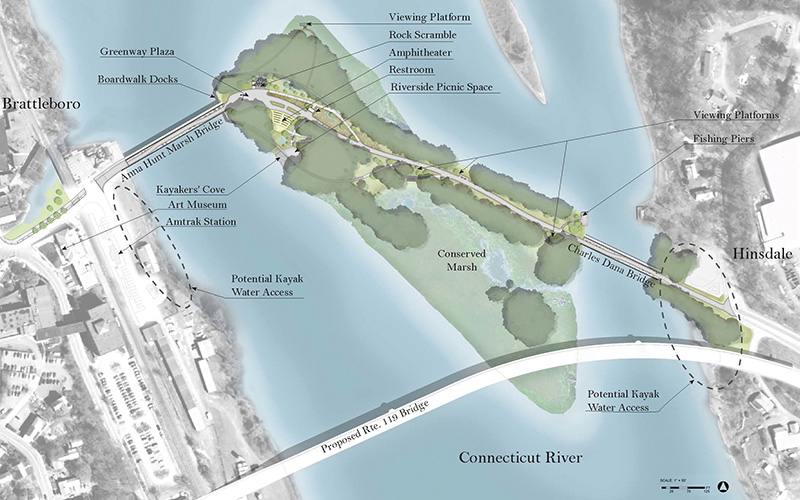 A conceptual plan of the new bridge, island park, and reuse of the old bridges.

The new bridge plan, spearheaded by the New Hampshire Department of Transportation and the Vermont Agency of Transportation in conjunction with an advisory committee, was originally developed in the 1990s, but a lack of funding, right-of-way negotiations, and other issues continually delayed the work. The existing bridges were identified as eligible for listing on the National Register of Historic Places in an environmental impact assessment, thus ensuring their preservation. The project has received widespread support from both communities and local agencies, though some Hinsdale residents and officials have expressed concerns about the town potentially being responsible for long-term maintenance costs for the existing bridges.

From the junction with Route 142 in Brattleboro, roughly 1,000 feet downstream from the existing crossing, the new bridge will cross over the railroad line, the Connecticut River, and Hinsdale Island’s southeast tip before joining the existing Route 119 roadway at a shopping plaza on the New Hampshire side. The 1,800-foot-long structure’s open design, width, and sidewalks will enhance safety for motorists and pedestrians, and bypassing the railroad crossing will improve traffic flow. 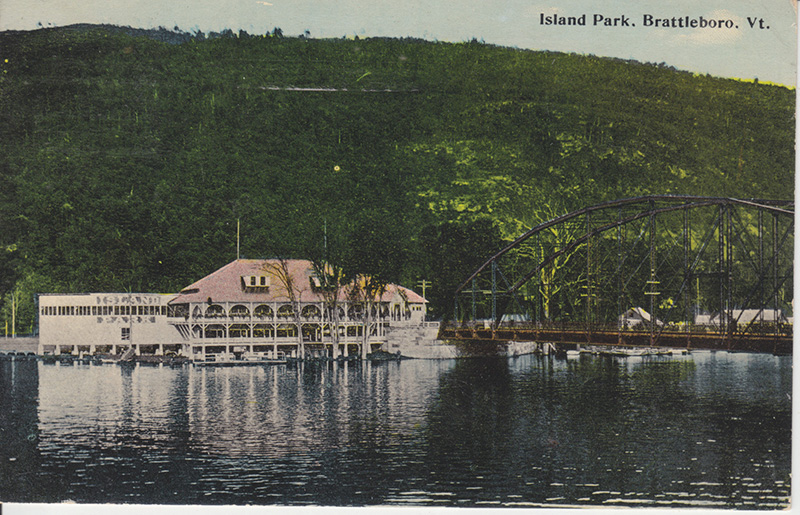 A long-term vision for the current crossing is being developed by the Existing Bridges Subcommittee, a citizen’s advisory board comprised of representatives from regional planning organizations, state transportation agencies, and both communities. The University of Massachusetts Department of Landscape Architecture and Regional Planning provided a conceptual design in 2021. After an undergraduate studio design class presented preliminary ideas, graduate student Christopher Ramage drew up a final plan, which he describes as “an exciting, community-driven vision for adapting Hinsdale Island and the existing bridges into a resilient public landscape that provides recreational and ecological benefits.”

Ramage’s design features a boardwalk, boat dock, walking paths, a beach and landing for non-motorized boats, and a small amphitheater on Hinsdale Island; viewing areas and gathering spaces on the bridges; and boat launches on both sides of the river. Reflecting a transition from Brattleboro’s urban riverfront to the largely undeveloped New Hampshire side, the plan concentrates infrastructure on the island’s west end, with the eastern portion left in a primarily natural state. Proposed ecological management measures include removal of invasive species and establishment of wildflower meadows, a rare habitat in the watershed, along the former roadbed.

When complete, the new bridge and greenway will enhance connectivity between the greater Brattleboro area and southwest New Hampshire and facilitate several civic improvement projects on Brattleboro’s riverfront. J.B. Mack, Principle Planner of the Southwest Regional Planning Commission and Existing Bridges Subcommittee member, cites the initiatives as “once-in-a-lifetime opportunities for the Hinsdale and Brattleboro communities. Between the two projects, we expect to see new economic growth and prosperity, improved recreational access to area trails and the Connecticut River, and enhancement to the riverine ecosystem.”

Relocation of the existing crossing will allow Amtrak to build a new passenger station and welcome center with universally-accessible facilities and expanded parking on Depot Street. The Brattleboro Museum and Art Center, located on Bridge Street adjacent to the crossing, is also planning a significant expansion that will include a new building with a state-of-the-art gallery, classrooms, apartments, and a cafe. A comprehensive long-term downtown plan, released by the Brattleboro Planning Commission in 2021, prioritizes improving public spaces, greenways, and access for pedestrians and cyclists. Several proposed initiatives, including enhancements to riverfront streets, development of a route linking public spaces, and reconfiguration of the “Malfunction Junction” intersection, are also linked to the bridge projects.

The greenway’s proximity to existing trails and conservation areas in both communities, including the West River Trail in Brattleboro and the Fort Hill Rail Trail and Mount Wantastiquet in Hinsdale, will provide a variety of recreational and non-motorized transportation options. The Fort Hill Trail connects with the Ashuelot Rail Trail to form a contiguous 30-mile route to Keene, southwestern New Hampshire’s hub city. Mount Wantastiquet, a popular hiking destination on the river’s east bank, is the western terminus of the 50-mile Wantastiquet-Monadnock Trail, which leads to Pisgah State Park and Mount Monadnock.

Construction of the new bridge is eighty-six percent federally funded, with the states of New Hampshire and Vermont providing 83 and 17 percent of the remaining amount, respectively. Rehabilitation of the existing bridges and Hinsdale Island, a separate project still being finalized, is expected to cost $8 million. The new bridge is scheduled to open to traffic in 2024. For more information and updates on the greenway, visit the Southwest Region Planning Commission website swrpc.org.