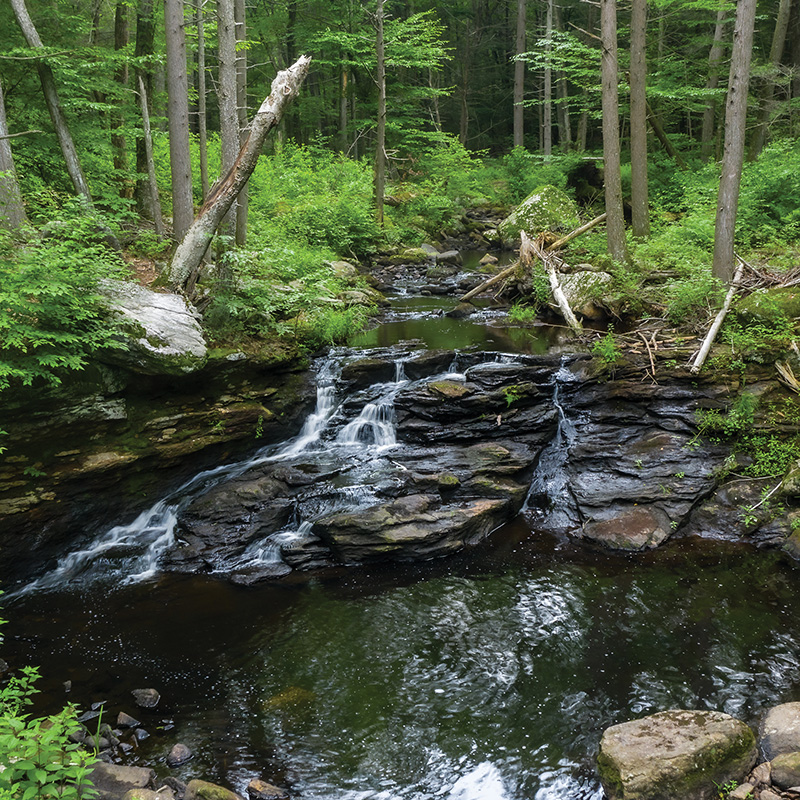 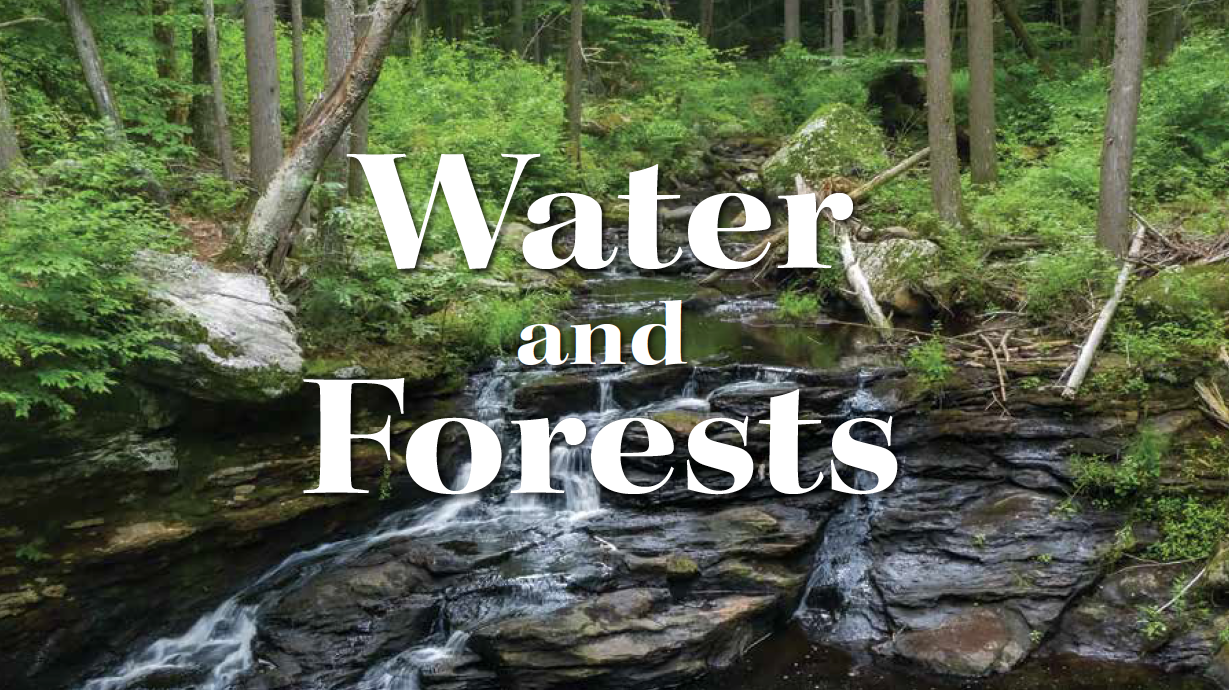 Roaring Brook #2 flows through Sheepskin Hollow Preserve in East Haddam, CT. Under the stewardship of the East Haddam Land Trust, conservation of this area is important as it’s the headwaters for Roaring Brook which eventually reaches the Connecticut River. Image Credit: Christopher Zajac.

Anyone who studies rivers knows that the land cover in a watershed is the number one predictor of the health of a river. If the watershed is covered in forest the river will likely have low temperatures, low sediment loads, low nitrogen levels, and be low in heavy metals. These are all good things that result in more species of aquatic organisms living in the river. But if that watershed is changed, due to changes in land use—such as converting forests to grazing and crop production, or building impervious surfaces like structures and roads—then the river will change too, and not for the better.

Studies in the Chesapeake Bay watershed determined that deterioration of stream quality can begin at just a few percent of impervious surface; sensitive species like brook trout begin to be stressed. To put that in context, a few percent is equivalent to running a dual lane road through a square mile of forest. Seems like a small change, but the fish will feel it. When impervious surfaces are increased to ten or fifteen percent, streams and rivers show significant degradation and many species like stoneflies and caddisflies are gone or going. When the land is considered “urban” it will generally have about forty percent impervious surface, and the water quality will likely be poor. Maybe blacknose dace, snapping turtles, and carp can make it, but little else. The engineering department at Purdue University estimates that approximately eight times more storm water runs off from impervious surfaces such as streets, sidewalks, and roofs than from forested land. And the water coming from the impervious surfaces is hotter in the summer and more polluted all year long.

Forests literally catch the rain. The droplets falling from the sky at 20 mph are intercepted by needles and leaves that direct the water from leaf to twig and then branch to trunk. That is why in the first minutes of a rain you can stand under a tree and not get wet. A single tree can intercept 100 gallons of rainwater, delivering it slowly down the trunk. Some of the precipitation follows channels made by the roots down past the topsoil and into the groundwater. As a result, there is less surface runoff, less erosion, and more infiltration. This groundwater flows slowly into streams and aquifers and is the source of drinking water for much of the population.

Forest disturbance can reduce the mean annual water flow by up to 50 percent compared to that of a mature forest, and it can take as long as 150 years for that flow rate to fully recover after a forest is cleared. Even in dry seasons the streams in an ancient forest are flowing. By contrast, streams in cleared areas are “flashy”—they flood during storms and in-between storms, and they dry up. This can be a problem for humans that live nearby, as well as for the wildlife that depend on a water source. Flooding and erosion can be costly problems for many communities.

If we want to keep a river clean by keeping our watershed forested, how do we go about that? We must ask who owns each parcel and how they plan to treat that land. It may seem a daunting challenge, but it is one that we have some control over as a community. Parcels come up for sale all the time, and once sold a forested parcel could be developed. But a parcel could instead be purchased in order to protect it. Which direction will the land go? For that is the direction the river will go. And how can we repair already degraded waterways? The most cost-effective and time-tested way of doing that is to increase the forest cover—starting with planting buffers along streams. 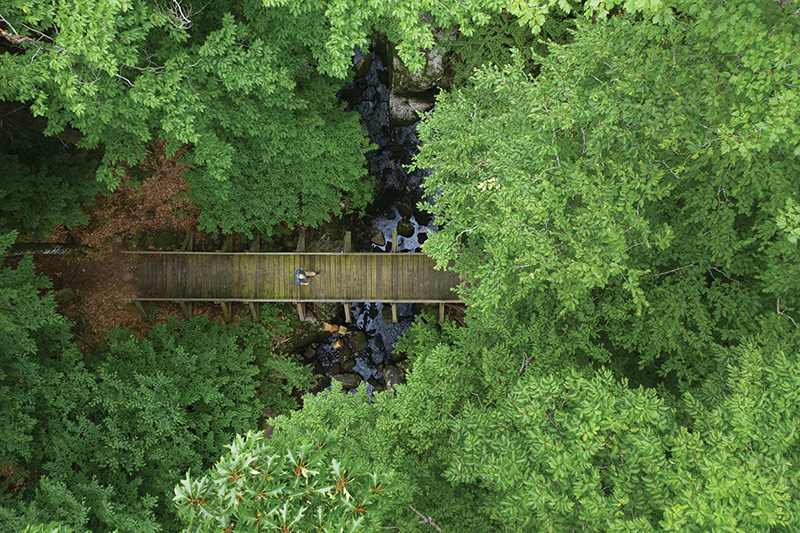 Forests have a positive effect on the organisms in the streams that run through them. When a large tree falls into a stream it increases the “roughness” of the stream—meaning that water now has to flow under, or around, or over the obstruction. This slows the water in some places, creating backups, and it speeds the water in other places, creating scouring and deep pools. Overall, the result is reduced flow velocity, and therefore decreased erosion from stormwater events. The roughness resulting from large trees fallen in the rivers and streams also benefits the fish. They now have a complex “landscape” in which to feed, breed, and rest. The pools formed by trees that have fallen into a stream are favored spots for anglers because they contain more abundant fish, of a larger size. The fish benefit in other ways too, because the fallen logs trap carbon-containing debris, such as branches and leaves (sometimes forming mini-dams), and this carbon debris is a substrate for very small organisms such as bacteria, fungi, and algae. In addition to removing dissolved nutrients from the water, these micro-organisms are food for small fish, and for the invertebrates that the larger fish feed upon. Because it takes many, many years for large old logs to decompose, such stream structures are relatively stable.

Shifting our perspective from the flow of water over and around trees to the flow of water inside trees, water flow inside plants is generally from the roots upward toward the leaves. About ten percent of the water is used for photosynthesis (which releases oxygen from the water molecule, and also captures carbon dioxide from the air), and the rest of the water, ninety percent, escapes from the leaves’ stomatal pores as vapor. This process is called transpiration, and it is a critical part of Earth’s hydrological cycle. A single large tree can transpire hundreds of gallons of water a day when conditions are ideal. Multiply this by the number of trees in a forest and you begin to sense the magnitude of its importance. In any given year, half of the water vapor in the atmosphere has moved through the stomatal pores of plants. There is an aerial river of water vapor over our heads, and the warmer the climate gets, the more water vapor the air holds. When the water is finally released there may be massive downpours and flooding. Researchers believe the warming climate is responsible for the record-breaking floods of 2021.

We have heard about the importance of forests in reducing atmospheric carbon, and possibly keeping global temperatures lower; less frequently discussed, however, and less well understood, is the effect that forests and water exchange have on global temperatures. This transpiration and evaporation of water (both from the stomata and from leaf surfaces) creates a cooling effect because it takes heat/energy to change a water molecule from liquid to gas, and that results in lowering temperatures. Cooling is also enhanced by the shading effect that trees provide. Where there is not enough tree cover, deadly heat islands may result.

Our species has reduced planetary forest cover from 46% to 31%. In the New England states, the spectacular forest recovery following the devastation wrought by the industrial-scale logging has now slowed and reversed. We are losing forest cover once again, this time to development and the impervious surfaces that come with it. If we are serious about wanting healthy waterways, specifically a healthy Connecticut River, we must keep the forests on the land. And ideally those forests will contain big old trees and habitat for countless other species.

Dr. Joan Maloof is the Founder and Director of the Old-Growth Forest Network, a national organization that seeks to create a network of forests across the US, with one in each county where forests can grow, open for visitors and never logged, and a network of people inspired to protect them. Through her speaking appearances and the five books she has authored about forests, she has become an important voice in forest preservation nationwide. Maloof is Professor Emeritus at Salisbury University, in Maryland.