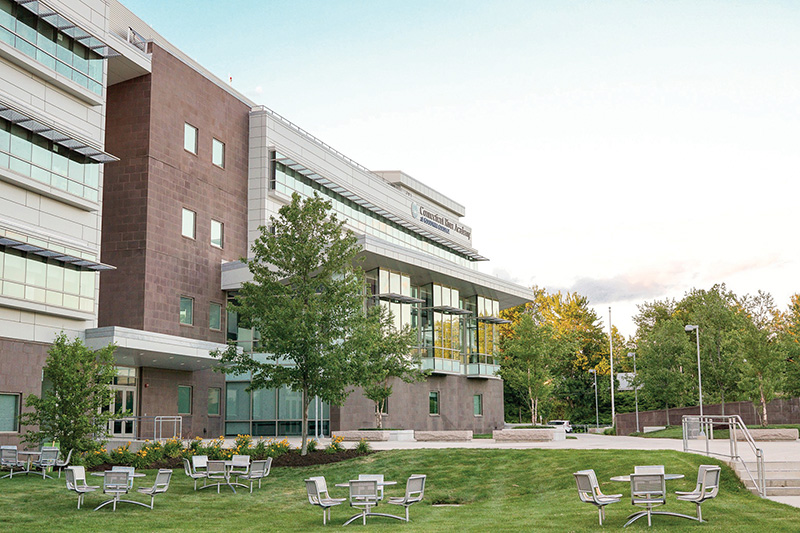 Story and Photo by Arthur Bogen

If you were a robin returning to the Connecticut River in the spring of 1970, you would have seen compromised industrial sites along the riverbanks. This spring you would have been amazed at the transformations up and down the river. Where an oil terminal stood, there is a college; an abandoned mill is now a solar array farm; another mill is now a green computing center. These sites are redeemed brownfields—challenged places with known or suspected contamination that stymied their redevelopment and where conditions hurt the river waters and land.

Over the last few decades, there have been significant advances in the science, technology, funding, and regulations deployed to address brownfields. Ground-penetrating radar is used to locate buried piping, tanks, vaults, and other subsurface construction. Mobile drilling rigs sample soils and are used to install monitoring wells for groundwater testing. Constituents of concern are identified through a series of state and federally approved sampling tests and laboratory procedures. These parameters are always evolving as new issues are identified and as the technology advances.

Early in the process, a site assessment must occur. A Phase I is a regulated document that identifies historic uses, environmental incidence reports, and visual observations as to potential areas of concern. A Phase II with soil and groundwater sampling is then conducted. Based on those results, more sampling may be required to define the extent of the various contaminated areas before a cleanup plan can be devised. All this requires significant funding as well as access to the site, an aspect of brownfield resolution that can be challenged by property owners or those parties with financial exposure. The sites in this article reflect some of these matters and the experience of prime movers with the perseverance and vision needed to drag these damaged properties into valuable assets once again.

Barges brought petroleum products up the river to inland terminals in East Hartford and Portland. The damage to the land and water was visible. Pipes from the docking area transferred petroleum products to above ground storage tanks. Over the years there were spills and releases that contaminated the soils and groundwater under the sites. After heavy rains at East Hartford, one could see a sheen on the river emanating from the site. The 30-acre terminal was contaminated with petroleum, volatile organic compounds, polyaromatic hydrocarbons, and lead. After more than $1,000,000 of grants from EPA and the Capitol Region Council of Governments Brownfield Assessment Program, $3,000,000 from the Connecticut Development Authority, and $200,000,000 of private investment, an amazing transformation sparkles for the robins to see. Gone are the oil tanks, pipes, and visible pollution in 2005.

Goodwin College, the Connecticut River Academy, and the elementary school bring more than 4,500 students a day to learn in river view classrooms, on the 40’ research vessel Goodwin Navigator, and in field work on campus. They learn about water quality monitoring, how to do test borings, and the importance of flood plains, sustainability, recognizing invasive species, and conservancy. Active educational partners include the US Geological Service, the Nature Conservancy, and the Natural Resources Conservation Service. The public can access the two miles of riverside trails that link through the campus, and kayak and canoe paddlers can enjoy rest sites. Students work at organic gardening with food donated to students in need. All buildings are LEED Silver Certificate. There are electric vehicle charging stations and rainwater reclamation for secondary reuse.

Some miles downstream, another closed oil facility is being evaluated and cleaned at the direction of the Portland municipal government. Such leadership has been demonstrated by communities across the country when it became clear that they must address this complicated legacy of brownfields. The Brownstone Quarry Park, known for zip lines, swimming, and kayaking is nearby. The 5.28-acre brownfield parcel at 222, 230, and 248 Brownstone Avenue is impacted by petroleum contaminants. The Connecticut Department of Community and Economic Development provided an assessment grant of $200,000 and cleanup funding of $750,000, while the town provided $385,000 to purchase the site. The Connecticut Scrap Metal Company of Franklin, Connecticut, removed the five aboveground storage tanks at no cost to the town. Bidding for the cleanup contractors is in process. It is expected to take until Spring of 2022 to complete the cleanup with continuing groundwater monitoring to assure that the river water stays free of problems from this site. Commercial and recreational reuses are under consideration.

Heading back upriver, the 60-acre site in Hartford and Windsor is undergoing an ecological, commercial, and recreational conversion of remarkable scale. Owned by the non-profit Riverfront Recapture, the project reimagines and redevelops the riverbanks. A leadership grant from the Richard P. Garmany Fund at the Hartford Foundation for Public Giving is acknowledged in the creation of the 9-acre Garmany Cove for paddle sports. The Conneticut Department of Energy and Environmental Protection provided $125,000 from their Greenways and Trails programs, while the project received $500,000 from the Conneticut DOT Community Connectivity program. One million dollars came from the Capital Region Development Authority, and EPA awarded $500,000 toward cleanup of pesticides and herbicides. These supporters demonstrate the critical nature of the partnerships needed for the continuing brownfield work. A poor-quality wetland will be replaced by an ecologically developed flood plain. There are 10 acres away from the river that are proposed for commercial reuse. When completed in 2022, this will be the final link in a seven-mile, multi-use public transportation system.

Brownfields have also been reused in Windsor, Vermont, where a former building slab now supports a 500-kw solar array secure in a restored floodplain. The old Holyoke Mill in Massachusetts is now a high-performance data center using hydroelectric power. The former Robertson Paper Co. site in Bellows Falls has been cleaned up with EPA grants. Other projects are being considered.

When the robins return next spring, their views and habitat will have continued to improve.