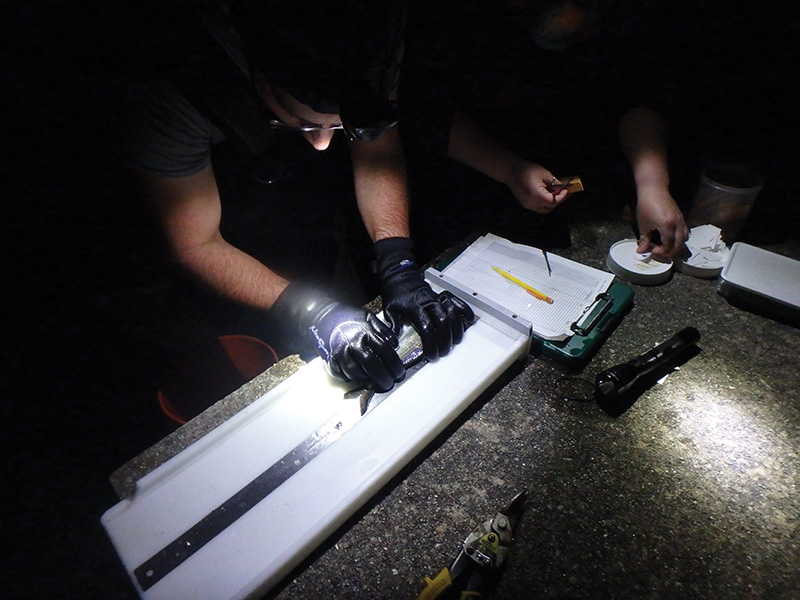 Andrew MacDonald calls out the length measurement of an adult alewife while Kate Littrell records the data and collects a tissue sample from the fish. Image courtesy of Sally Harold.

We have been writing about efforts to protect and restore runs of migratory fish, which includes the alewife (Alosa pseudoharengus). The alewife is an anadromous (sea-run) herring that begins its life in slow moving freshwater, migrates to the ocean to feed and grow, and then, three or four years later, returns to the same freshwater body to spawn. It is not a species anglers seek nor one we eat, but it is an important “forage” fish that provides food for many other creatures, both in the fresh waters of the East Coast and in the Atlantic Ocean. For example, the ospreys, which nest along the Connecticut River, rely heavily upon the run of alewife that enter the river in early March just as the birds are returning from their winter vacation down south.

Alewife used to be incredibly abundant in the Connecticut River and adjacent watersheds but have suffered severe decline since the mid-1980s. Perhaps you’ve read about our efforts to open up rivers and restore access to historic habitat by removing dams and building fishways. The alewife is the beneficiary of many of these projects. 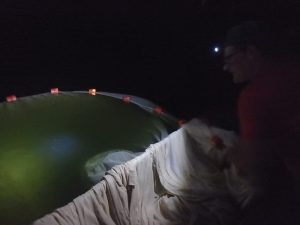 Yale biologists in a boat draw in a fine-mesh purse net to capture tiny young alewives for study. Image courtesy of Sally Harold

Until recently, we did not know much about the species’ life in these freshwater ponds: exactly what do they feed on, how fast do they grow, what triggers their outmigration to the ocean, how do they interact with other fish species, and how do they affect the nutrient budget in these ponds? With the species in decline, more research has recently been initiated to learn more about the species. Much of it takes place in the Connecticut River. Scientists from the University of Massachusetts, University of Connecticut, and Yale University have been delving into these questions.

Dr. David Post, a professor with Yale’s Department of Ecology and Evolutionary Biology, was one of the first of the more recent investigators to start studying alewife in local lakes. The Post Lab has had a series of PhD students working on studies to answer many of these ecological questions. Dr. Eric Palkovacs, who is now a professor at the University of California Santa Cruz, was one of Dr. Post’s students. Despite being in California, he still studies East Coast alewife populations with Dr. Post. These studies are valuable in enhancing our understanding of evolution and aquatic ecosystems and help inform State and federal programs designed to best manage, protect, and restore these populations.

One early study taught us more about the outward migration of the young alewives, which hatch in the spring and out-migrate in the fall. Migration of many animals is triggered by a change in day length or temperature, but the young alewives leave when they deplete their food supply, which is zooplankton. Such zooplankton have cycles but can respond to predation by alewives like grass can respond to grazing by cows. If cows begin to overgraze a field, the farmer must move them to another field. If alewives begin to overgraze zooplankton in a lake, they depart for the ocean where the food is generally plentiful. The exact timing of that may vary year-to-year based upon weather, the number of fish, and other factors. 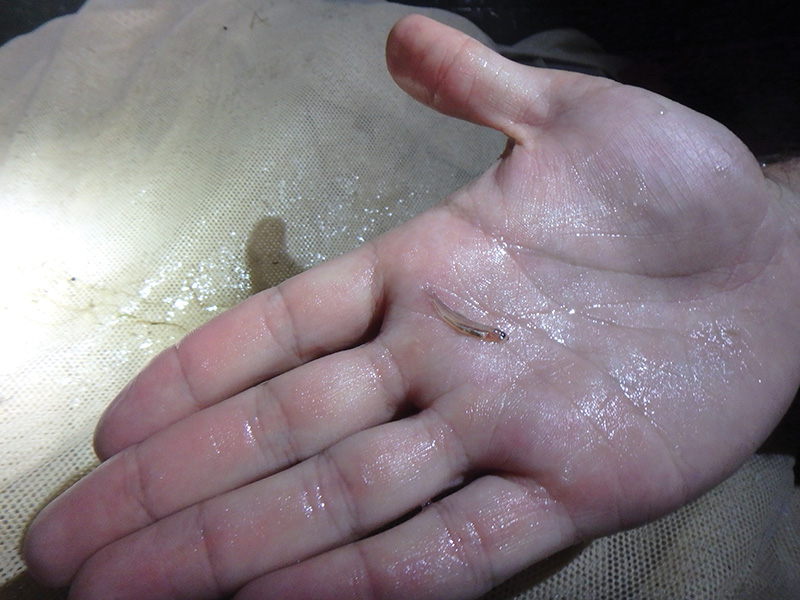 This alewife, weeks old, could be a “landlocked” or a “sea-run.” Back at the Yale laboratory, biologists will age it looking at microscopic ear bones and analyze its DNA to determine its parentage. Image courtesy of Sally Harold

Some of the many anadromous fish species that go out to the ocean can develop landlocked populations—fish that do not go out to sea but spend their entire life in freshwater. Alewife is one of those species. It is not as simple as some sea-run fish just not going to sea. The landlocked alewives are the same species as the sea-run alewives but genetically different. They evolved an alternative life history over millennia and actually look different—they’re much smaller and parts of their mouths that filter out food are shaped differently. Their physiology is different. A few lakes that drain into the Connecticut River have landlocked alewives in them, mostly stocked from one or two lakes that had historical landlocked populations. The stocking was done by the state fisheries agency to provide forage for trout and other gamefish. In some of these lakes there were disagreeable algal blooms because the landlocked alewives, which are present year-round, overgrazed the zooplankton, and that allowed the phytoplankton (microscopic algae that zooplankton eat) to explode. Because of this, some lake authorities opposed building fishways that would restore runs of sea-run alewives to their lakes.

Biologists from the Post Lab first showed that landlocked alewives could not result from reintroducing sea-run alewives. That evolution occurred a long time ago, and all young sea-run alewives go out to sea. They also demonstrated that these young sea-run alewives do not overgraze zooplankton in most lakes because they leave when the zooplankton population dips below a certain level. They identified some lakes that might be at risk of overgrazing and developed a method for determining how many sea-run alewives a lake could support without a negative impact to the water quality. In those cases, a fishway could be closed to prevent too many fish from reaching the lake. This resulted in many lake authorities agreeing to a fishway, including at Rogers Lake, which is the source of Mill Brook and Lieutenant River that flow into the Connecticut River at Old Lyme, Connecticut.

There’s another interesting angle to Rogers Lake. Before the three fishways on Mill Brook were completed, Roger’s Lake already had an existing population of landlocked alewives. With the Roger’s Lake fishway, this lake would be the first location where a sea-run population would co-exist with a landlocked population. Dr. Post termed this “secondary contact,” and his lab has been studying this ecological milestone for years. To jump-start the restoration to the lake and to ensure that they could identify the source of any fish that they subsequently captured, the team imported thousands of pre-spawned adult alewife from a nearby stream for several years. Before releasing them into Rogers Lake, they took a small tissue sample (clipped the tip of a fin) and later ran genetic analysis on each. Not only did that allow them to identify individual fish, it allowed them to identify the offspring of each fish. This enabled them to prove that in a few instances sea-run alewives were spawning with landlocked alewives and producing hybrids. It also documented that as the sea-run alewives that hatched in Rogers Lake returned to spawn, they were much more likely to swim up through all three downstream fishways and enter the lake than alewives that were hatched in the ponds downstream of Rogers Lake. The team is now determining the life strategies of the hybrids: do they adopt a landlocked or a sea-run life history? Or both? The revelations that this multi-year study has produced go beyond what we have the space to report.

Last summer, we accompanied a Yale team led by Dr. Kate Littrell and Andrew MacDonald as they sampled newly hatched fish in the lake. The work must be done at night using floating lights that attract the fish and includes one crew in a boat netting fish and another crew onshore, measuring and sampling fish. A very fine mesh purse seine net is used to capture tiny alewives that recently hatched. Another night, we accompanied Kate and Andrew as they counted, measured, and tissue sampled returning adult alewives at the Mary Steube Fishway at the first dam below Rogers Lake. These dedicated scientists worked long, hard hours to collect critical data that will eventually be analyzed for scientific papers that will continue to expand our knowledge of these critically important fish and help guide their restoration for a healthier, more natural Connecticut River ecosystem.