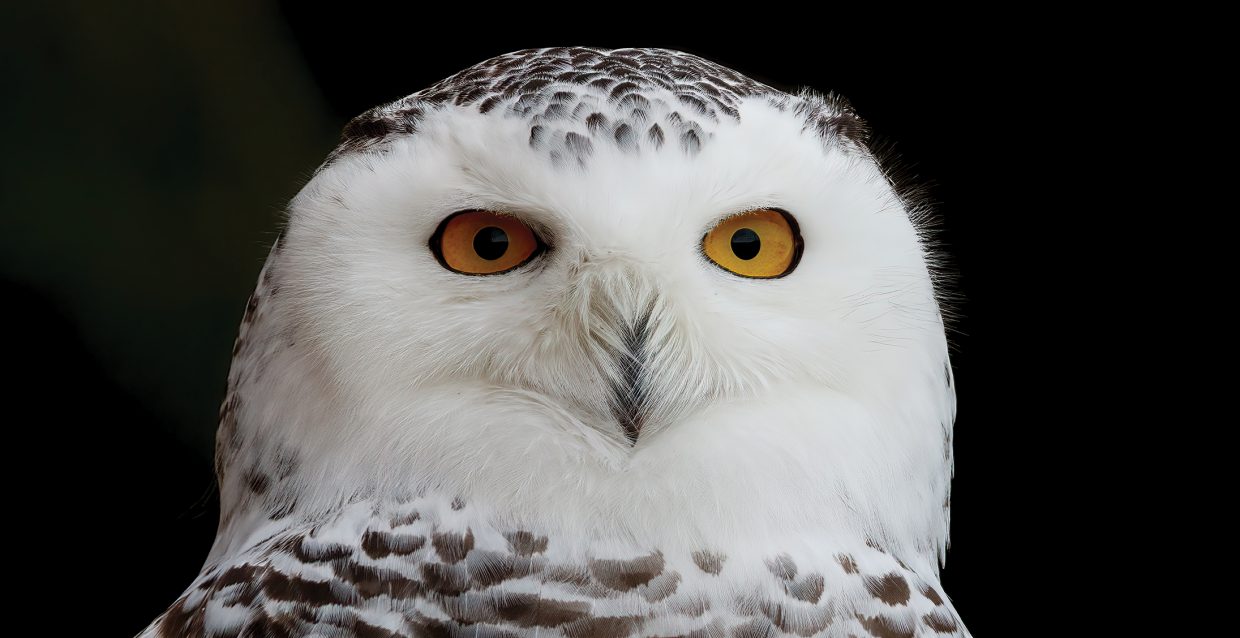 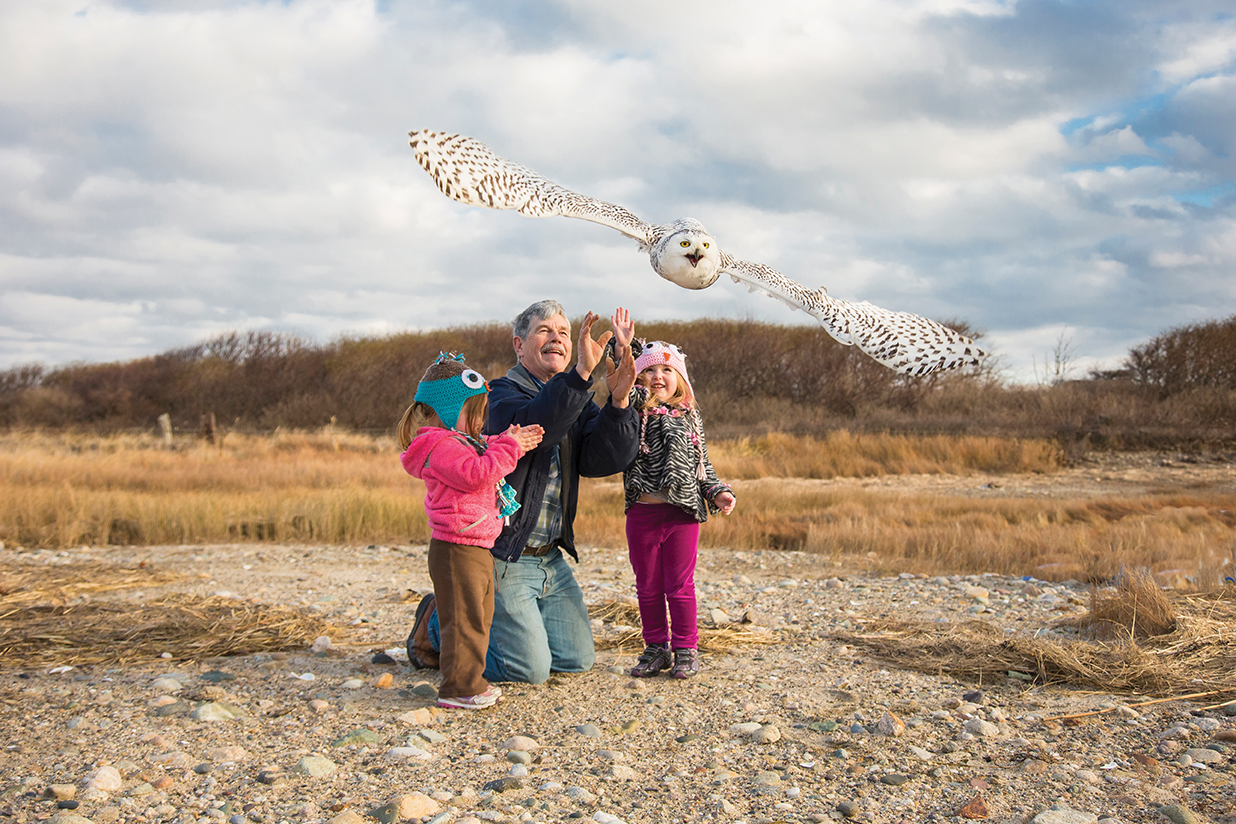 Snowy owls have always fascinated me. Not only are they stunningly beautiful, but I’ve heard they are incredibly fast, powerful predators.

To learn more, I engaged Norman Smith and Kenn Kaufman, two birding experts, in conversations by either email or in person to help me better understand these charismatic birds. Here are some excerpts.

Norman Smith is a self-taught naturalist from Braintree, Massachusetts. He is the former director of the Blue Hills Trailside Museum in Milton, Massachusetts, a 7,000-acre preserve, located on the south side of Boston, where he worked for 50 years.

In 1981, Smith started a project at Boston’s Logan Airport capturing snowy owls with harmless, spring-loaded bow nets and banding and relocating them. For the safety of the owls that show up at the airport and the aircraft that use the airspace, Smith said, “We capture, transport and release as many owls as we can.” In 1999, Smith got a breakthrough. An anonymous donor gave Smith some funding, allowing him to put satellite transmitters on the birds. Since then, Smith has captured, banded, and relocated over 800 snowy owls, an amazing feat, and solved several riddles about these unique, nomadic birds.

Tell me about your satellite transmitter program, I asked.

“One of the interesting things about the project was that out of the 12 snowy owls that I put transmitters on, three were shot in Massachusetts, before they even got a chance to leave, something I never expected. But because they had transmitters, we could recover the bodies, and brought them into Tufts Veterinary Clinic to be examined.

“The first bird was found at Cape Cod National Seashore, at Race Point. They did a gross autopsy on it and couldn’t find anything wrong. Then they did an x-ray and found the bird had been shot.

“A second bird was found on one of the Boston Harbor islands, by an environmental police officer. It had been shot with a 22 [rifle], and somebody cut off the wings and feet, as a souvenir. Then I had a bird in Falmouth, by Woods Hole, that somebody shot with a pellet gun. So, that was very sad. But the good news was that the other nine owls made it back to the Arctic.”

For years, Smith said people believed as gospel what Alfred O. Gross wrote in his ground-breaking book, Cyclic Invasions of Snowy Owls in 1945–1946, that snowy owls came to New England because there was no food up north. The author assumed that snowy owls would vacate the Arctic, come to New England, looking for food, starve to death, and never make it back north to be viable breeders. Smith’s project, however, disproved Gross’s assumptions. He was proud of the fact that nine out of the 12 snowy owls, fitted with transmitters, made it back safely to the high Arctic, and, in some cases, returned to Massachusetts many times.

Smith also confirmed that snowy owls, who visit Logan Airport, are usually young and healthy. “Their body weight is excellent, and they eat lots of birds, big birds,” he said.
“I have photographs of these owls catching Canada geese, brant geese, and great blue herons. In fact, I had one snowy owl that was being harassed by a peregrine falcon, which is one of the few things that harasses them at the airport. One day, this peregrine was flying around, while this owl was trying to roost, and biffed it on the back of its head and woke the owl up. The peregrine then flew off into a flock of starlings and caught one. Well, this snowy owl took off after the peregrine falcon, and I thought he’s going to take that starling away. No, he didn’t. Instead, he caught the peregrine, killed it, and had him for dinner. The other component to this story is the starling got to tell his buddies how that snowy owl saved his life!”

Multi-talented Kenn Kaufman is a naturalist, conservationist, and field editor for Audubon. He is also the author of several popular field guides on birds and butterflies, and has visited Barrow, Alaska (now called Utqiagvik) several times in the summer, studying snowy owls.

“A couple of things stand out for me. One is their adaptation to the high Arctic. They’re not the only owls on the tundra—a smaller species, the short-eared owl, can be found on the tundra of northern Alaska and Canada in summer. But that species is also a widespread breeder in open country much farther south, and it completely vacates the Arctic in winter. Many Snowy Owls stay north of the Arctic Circle all year. 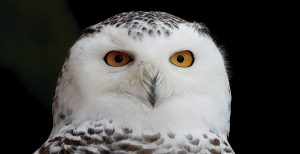 “Another thing is the fact that these owls are so nomadic. They move around the Arctic in response to availability of prey, so numbers in a given region might vary tremendously from one year to the next.”

Kaufman also noted, “In summers when the local population of lemmings is high, female snowy owls lay larger clutches of eggs and they succeed in raising more young. When prey is scarce, they lay fewer eggs, or they may not breed at all.

“This has a direct connection to their occurrences south of the Arctic in winter. Some reach southernmost Canada and the northern states every winter, without fail. There are always at least a few in winter along the coast of New England, for example. But in some seasons, they move south in impressive numbers [these are called irruptions], with hundreds recorded south of the Canadian border, and with a few going all the way to the southern states,” Kaufman said.

I get the sense snowy owls lead a tough life. What challenges do they face? I asked.

“There are various large predators in the Arctic that pose a threat [like bears, wolves, and arctic fox], especially to their nests and young. When they come far south in winter, most of the serious threats are caused, directly or indirectly, by humans,” Kaufman said.

“Regarding their toughness,” he added, “it’s worth pointing out that they’re classified in the same genus as the great horned owl, which is familiar all over the United States (and much of the western hemisphere). The great horned is often referred to as “the tiger of the air” because it’s such a fearsome predator, regularly catching prey as large as raccoons, skunks, and even other owls. The snowy might seem very different because of its color, but it basically brings that great horned owl level of fierceness to the Arctic environment.”

Give the Birds Space

If you wish to see snowy owls this winter, wildlife photographer Dan Berna recommends two reliable locations: Rye Beach, New Hampshire, or on Plum Island, south of Newburyport, Massachusetts. Be respectful of the birds, though, Berna cautioned. Give the snowy owls space, at least 100 feet, as they are often roosting during the day and need their rest. Enjoy.

Bill Hobbs is an avid birder and nature writer for The Day, a daily newspaper in New London, CT. He can be reached for comments at whobbs246@gmail.com.