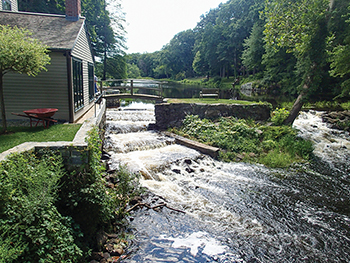 The authors built this pool-and-weir fishway at the Tiley-Pratt Dam on the Falls River in Essex, CT, by creating a series of stone weirs below the dam’s spillway.

This year, we took you underwater to witness migrating fish as they moved upstream in our watershed and congregated below dams. We wrote about the growing movement to remove dams to extend these fish migrations upstream, back into habitat they accessed historically. In this article, we turn our attention (and yours) to dams that cannot be removed. For these barriers, fishways are designed and built. 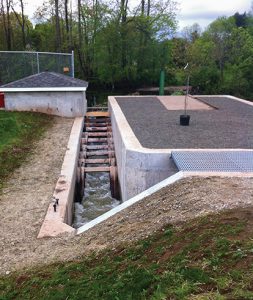 The StanChem Dam Fishway on the Mattabesset River in Berlin, CT, is a Denil style fishway and can pass many different species of fish.

A fishway is a structure built to allow fish to move around or over a dam, or other barrier, in either an upstream or downstream direction. They can be as simple as a pile of carefully placed rocks to a multi-million-dollar, automated facility built with steel and concrete, windows, cables, computers, and complex plumbing. When listing the benefits of dam removal, we mentioned many positive ecological benefits in addition to allowing fish to move upstream. Unfortunately, fishway construction really only achieves fish passage.

There are some dams that cannot be removed at the present time. They may generate electricity, protect against floods, supply water to municipalities or perhaps are just prized by their owners for the aesthetic value of the pond or history of the site. (Did we already tell you that most dams are privately owned?) If there are fish below a dam that would benefit from getting past the dam and the owner says ‘no’ to dam removal, we pursue fishway construction.

The interdisciplinary field of fish passage requires collaboration between fish biologists and engineers, and typically involves project managers, contractors, field biologists, and others. Biologists understand behavior, swimming abilities, and migrations of fish, and engineers understand how to calculate flow rates, energy dissipation, volume, and velocities, as well as how to design and build concrete walls, steel towers, and water conveyance. Together, they can design appropriate and effective fishways. If a project is designed without this collaboration, it is often doomed to fail.

Fishways are site specific, so biologists need to know: which species are targeted, when they arrive and depart, the species’ swimming and jumping ability, and their preferences in terms of water flow and temperature, etc. The engineers need to know about the site: the height of the dam, the purpose of the dam (whether water withdrawals or other uses that effect flow exist), the stream flow rates (by month), and many other things. For example, Atlantic salmon can leap 12 feet, alewives only around six inches. Shad arrive in Virginia in March but not until mid-April in the Connecticut River whereas adult American eels move downstream past dams, on their way to the sea, in September. Most dams prevent most fish from moving upstream, including past hydroelectric facility dams where fish cannot physically reach the turbine blades due to strong flows. Fish moving downstream, like juvenile shad or adult eels, can be drawn into the turbine intakes (upstream side of the dam) and because of gravity and flow, get sucked through the turbines. Like a stick under a lawnmower, fish passing through a turbine may get struck by the turbine blades and usually do not survive. Fish passage specialists try to design systems to keep fish out of the intakes and divert them to a safe downstream route (fishway), often a pipe. 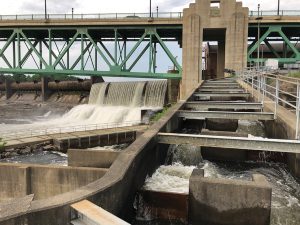 Large multi-million-dollar fishways like this one at Turners Falls, MA, are needed at the large hydroelectric dams on the mainstem of the Connecticut River.

The objective of these projects is to provide “safe, timely, and effective” passage. “Safe” means that the fish are not injured or killed in the process. “Timely” means that they must be able to find the passageway quickly. If it takes shad or blueback herring two weeks to find the entrance to the fishway and then another few days to finally pass, they may spawn (a process over which they have little control) before they’ve reached important upstream habitat. “Effective” means that the fishway is successful in passing most fish that wish to pass. If there are 10,000 fish and a fishway passes only 150, that fishway is not providing effective fish passage.

The creation of fishways began hundreds of years ago when English laws required a dam to have a gap large enough to pass an adult hog. Some of these rudimentary laws were recreated in the American colonies and the early nation, but were generally weakly enforced by towns, perhaps reflecting the influence of the dam owner. In the late 1700s and early 1800s, engineers successfully designed dams for large rivers. When these were built, fish passage was not included, and run after run of salmon and shad were extinguished. Construction of fishways began in earnest after the Civil War. Often these were constructed of logs and built on the opposite side of the river from the mill. Early fishways at Turners Falls, Lawrence, and Bangor passed a few salmon but very few shad or other species. When the great salmon rivers of the Northwest (e.g., the Columbia) were dammed for power in the first half of the 1900s, new designs for fishways were developed, perhaps for the first time guided by science. These so-called salmon ladders were reasonably successful at passing salmon and a few other species, including shad, although a full critique of such “success” would require volumes.

Those designs were “imported” to the East Coast to support river fish restoration programs and “modern” fishways were built in several locations in Maine and in the Connecticut River watershed, first at the Rainbow Dam (Farmington River, CT) and Turners Falls (Connecticut River, MA) and later in other locations such as at the Vernon and Bellows Falls dams. These fishways, built between 1976 and 1986, were generally successful at passing Atlantic salmon but failed to effectively pass shad. Agencies and power companies are now dealing with this shortcoming, and as licenses* come up for renewal, fish passage improvements are being sought. We have learned so much about East Coast fish passage in the last 50 years, thanks to research, experience, collaboration, specialty engineers hired by the US Fish & Wildlife Service, and specialists at the Silvio Conte Anadromous Fish Research Center in Turners Falls, MA (subject of a future column). 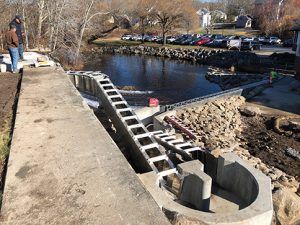 Steep pass fishways like the John D. and Jane A. Wiederhold Fishway in Essex, CT, include prefabricated sections of aluminum fishway that are bolted together and are typically used at smaller dams to pass river herring.

Not all fishways are at big main stem dams. Smaller fishways have been built at dams that are 4 to 15 feet tall on tributaries to pass shad, alewives, blueback herring, sea lamprey, sea-run trout, and other resident species. We’ve been involved in building many: a Denil fishway at the StanChem Dam on the Mattabesset River (using a design imported from France), two steeppass fishways on the Falls River (using a design imported from Alaska employing prefabricated aluminum units), and a pool-and-weir fishway, also on the Falls River, (using an age-old pool and weir design created by building multiple, notched mini-dams of concreted field stone across the channel, each one, a foot higher than the previous). Outside of the watershed, we’ve also built nature-like fishways that use little to no concrete or steel and instead, make use of boulders and smaller stones to create a low-sloped channel that resembles a natural stream.

While construction of large fishways is generally mandated by federal or state agencies, these small fishways are generally “community-based” and voluntary on the part of the dam owners. It often takes years to complete these projects which require outreach, engineers, planning, fundraising, access agreements, permitting, contractors, and management agreements to ensure the fishway is properly operated and maintained once it is completed. Just as there have been dam removals in all four states of our watershed, many fishways have also been constructed. Communities or dam owners who are interested in a fishway at a local dam should contact their state’s fisheries agency or the two of us (riverworkllc@gmail.com), and perhaps we can help.

*The Federal Energy Regulatory Commission (FERC) licenses hydroelectric facilities. These licenses are typically good for fifty years. Improved fish passage or additional monitoring, based on science, may be a requirement of the new license.