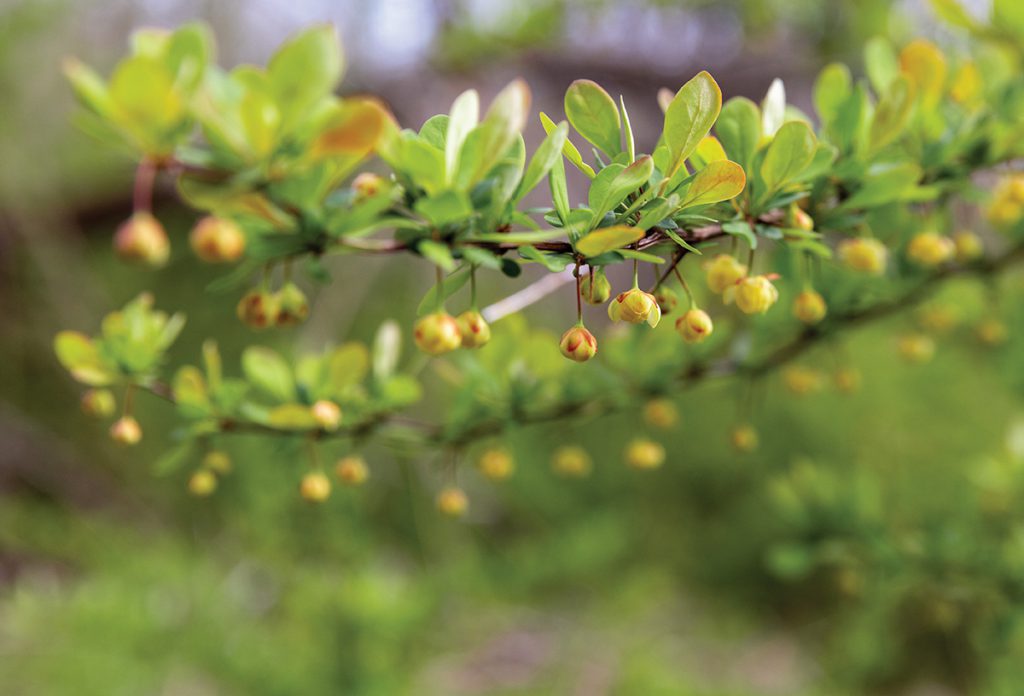 Not just another invasive species

The story is a familiar one. This introduced shrub has advantages: the ability to tolerate the full spectrum of light, including deep shade; attractive and abundant berries (with a germination rate in the order of 90%) that ensure effective dispersal by birds and small mammals; multiple forms of reproducing itself—by seed, by fragment, even where a branch contacts the ground.

But research on Japanese barberry (Berberis thunbergii) reveals several fascinating twists that make this plant more than just another invasive species in the estuary region: it holds the trifecta of circumstances that elicit such statements from researchers as “Japanese barberry infestations pose an indirect threat to public health,” and it is “an urgent problem for forested ecosystems.”

Should you think that you are unfamiliar with Japanese barberry, the chances are good that you have seen it without knowing what it was. One of its strengths is the ability to leaf out early—before competition from the wooded tree canopy where this shrub often grows—and retain its leaves after most of the canopy leaves have dropped in the fall. In the spring, in particular, in places where barberry has gained an indisputable advantage, the understory of impacted woodlands can be an even stand of just this shrub: nothing else, including any native shrubs, and sadly, no spring ephemeral flowers—our native bloodroot, Canada mayflower, trout lily, or jack-in-the-pulpit. 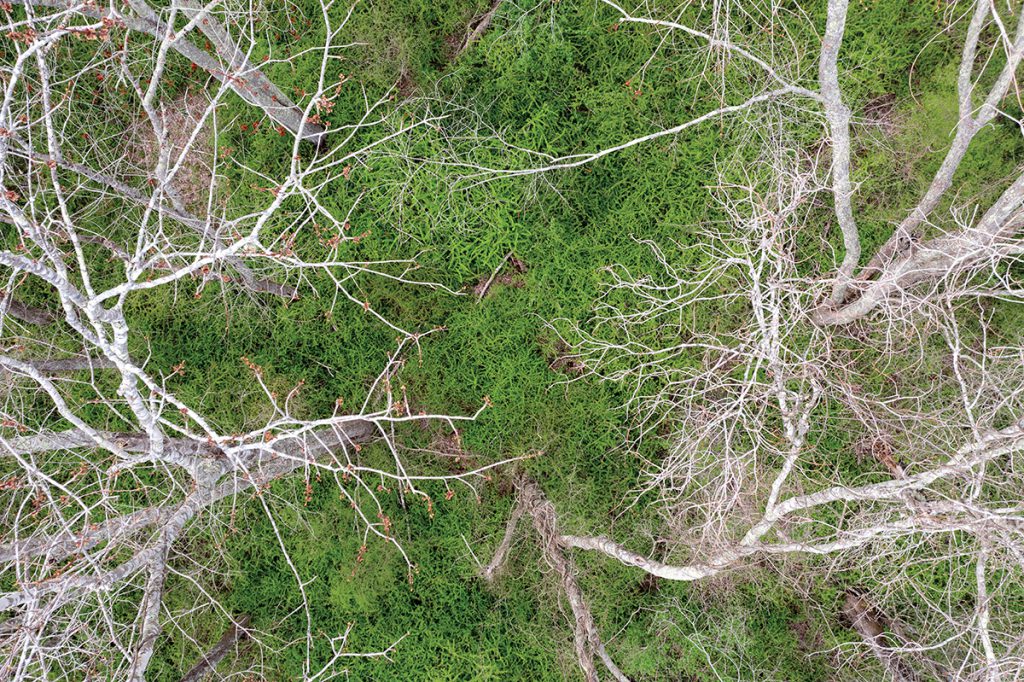 Looking down through the canopy in Banningwood Preserve in Lyme, Connecticut, Japanese barberry (Berberis thunbergii) leafs out in early spring and blankets the understory before the trees and other vegetation have a chance to sprout. Image Credit: Christopher Zajac

Like many introduced plants that run amuck in a new land, it’s important to tease out what is introduced and what, if any, is native. Japanese barberry, the focus of this inquiry, followed the much earlier introduction of common barberry (Berberis vulgaris) that was intentionally brought to New England by colonial settlers for use as a dye, for making jam, and to create livestock hedgerow barriers. Although some populations remain, this plant was the focus of extensive eradication efforts at the turn of the last century because it is a host for wheat rust, a highly damaging fungal disease of grain crops. There is a species of barberry—the common, or Allegheny barberry (Berberis Canadensis)—that is native to the United States, although it doesn’t occur in the northeast, growing instead in the southeast Appalachian region.

We know a lot more today about invasive plant species and the problems they cause; cautions, regulations, and prohibitions to the transport and introduction of plants are becoming the norm. Historically, arboretums welcomed live plant specimens from all over the world in the pursuit of the world’s fantastic plant diversity. The invasive water chestnut (Trapa natans) was introduced into the Cambridge botanical garden at Harvard University around 1877 (and found growing in the nearby Charles River the year after); Japanese knotweed (Polygonum cuspidatum) found its way into the English countryside after its introduction to Kew Gardens in 1850 (arriving in the US in the late 1800s); and Japanese barberry (Berberis thunbergii) was sent to St. Petersburg Botanical Garden in Russia in 1864 before arriving, about ten years later, at the Arnold Arboretum in Boston.

Japanese barberry has also been the focus of extensive propagation by the horticultural trade, with over 40 cultivated varieties providing many color and size variations. It was popularized as a compact trouble-free shrub with small yellow clustered flowers and abundant red berries on the underside of its arching branches. Depending on your preference, the single sharp spine that protrudes from the base of each rosette of leaves along the branch can either make this plant unpleasant to work with or create an effective barrier—such as a hedgerow—to keep farm animals and deer at bay.

Escapes from these introduced plant vectors have ended badly for the surrounding natural landscapes where they land. A lot of the research investigating the biological impacts of Japanese barberry has come, tellingly, from studies done in the northeast. 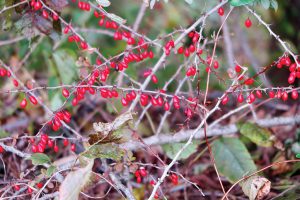 As for the trifecta: dense monocultures of Japanese barberry bring together deer, small mammals, and ticks in such a way that directly impacts people: Lyme disease. Deer are important to the black-legged tick because they provide the “blood meal” necessary for the tick’s life cycle. Although deer do not eat barberry, they do browse native vegetation (including tree seedlings necessary for forest regeneration) that compete with barberry, therefore creating favorable conditions for barberry to succeed. The height of barberry also conveniently provides “excellent questing habitat” for ticks, i.e. they lay in wait and are not disappointed. The white-footed mouse, which is a vector for Lyme disease and a prime host for the black-legged tick that transfers this disease to humans, finds protection from predators and access to ample fruit below dense barberry infestations. In Connecticut, barberry leaf-out directly corresponds to the spring activity of the adult blacklegged tick. It’s a perfect storm.

Although the perpetuation of Lyme disease is certainly of interest to residents of the estuary region, there are aspects of barberry’s success that are equally troubling to the health of the estuary—particularly its vital forested watershed. As noted above, deer browse can contribute to dense stands of Japanese barberry, but the plant itself has unique means for perpetuating its success.

Research has documented altered soil chemistry, possibly from biochemicals generated by the plant itself to inhibit competition. And microbe composition where barberry has heavily colonized results in reduced depth of the soil litter layer—that vital upper “skin” of natural soils that is essential to seed germination and home to a concentration of insects and other arthropods.

Entomologists have discovered significantly lower insect diversity in that leaf litter, including generalist predators such as spiders and ants that are important to other animals—among them birds—and so on throughout the food web. These ripple effects can influence the ability of native forests to perpetuate, or as one researcher stated, “In a few decades’ time, where barberry is very heavily invaded, as the older trees die, there may not be younger trees to replace them.”

Despite these grim research results, it’s worth noting that barberry as a species is not without positive attributes. The roots are rich in the alkaloid berberine, and it has been used for many years in traditional medicine as a painkiller as well as for a variety of other human maladies. It has antimicrobial, antifungal, and antioxidant properties that have made it useful in the food industry. 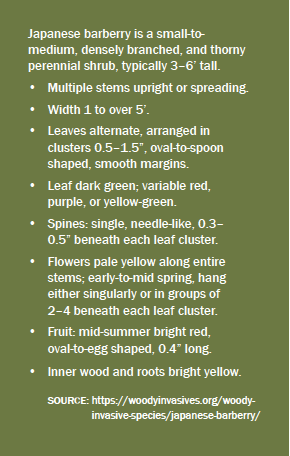 And barberry can be controlled effectively by pulling—as always with the caveat of being detected early enough to make that effort feasible. Entire bushes can be uprooted (using a weed wrench or mattock for larger plants), with the added benefit of being easily identified in early spring before other plants are active (and before barberry has set seed). The roots and inner bark are a bright yellow, a foolproof diagnostic for this plant. For larger populations, a foliar spray of the chemical glyphosate is effective, but whenever possible mechanical control is preferable.

Although no biological control has yet to be approved, a number of observations and records of potentially effective insects have been recorded, including a 2009 paper by noted biologist Joan Ehrenfeld from Rutgers University documenting extensive defoliation by a native barberry geometer moth (Coryphista meadii). Connecticut has a fruit fly that feeds on the immature fruit, and the CT Agricultural Experiment Station lists four more insects and two fungal diseases that can cause problems for barberry.

The best control remains prevention. Although a sterile version of barberry has been developed at the University of Connecticut (it has no berries that can be spread by birds), popular cultivars are still readily available at nurseries and big box stores. The plant has been banned in several states, including Massachusetts and New York.

As the global climate continues to change, our understanding of how the natural ecosystems adjust in the estuary region is evolving. There will certainly be winners and losers. The continued impacts of non-native invasive species stress the ability of these ecosystems—and ourselves—to negotiate the future.

Judy Preston is a local ecologist active in the Connecticut River
Estuary.