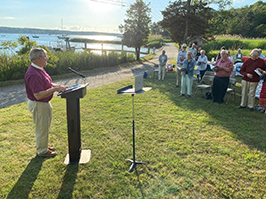 Where Science and Faith Intersect 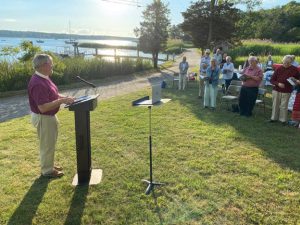 The outdoor service was conducted by Bishop (of Connecticut) Ian Douglas, himself an avid boater who arrived by sea. It took place at Pilgrim Landing in Old Lyme, Connecticut. People attended in person and via zoom, no small technological feat.

Entitled “Living Waters,” the service was taken from Chapter 4 of God’s Good Earth, a book published in 2018 by Anne Rowthorn and her husband, retired bishop of the Episcopal Church, Jeffery Rowthorn. Both Rowthorns were present and participated in readings for the service. 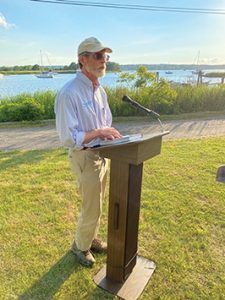 Dr. Andrew Fisk, Executive Director of the Connecticut River Conservancy, delivered the talk about the river itself, and especially the success in recent years in improved water quality and the consequent restoration of fish in some abundance. He noted that not that long ago, the Connecticut River, along with so many other rivers, had been considered a place to carry off the industrial and human waste of the inhabitants. Said Fisk, “It’s not our river’s job to clean up our pollution! It’s our river’s job to be a living water.”

Today, the Connecticut River is clean and is coming back to life, as a living river. Once headed for extinction just a few generations ago, today hundreds of thousands of fish, especially shad, can now go far enough upstream to spawn. But there is a long way to go. Where there are now hundreds of thousands of shad going past the dam at Holyoke with the aid of man-made devices, in the future, with good stewardship and dedication, there could be millions. The river could become, once again, a source of sustained abundance that was enjoyed by Indigenous inhabitants for thousands of years.

Dr. Fisk emphasized that even though we don’t, today, know how to return to such abundance, it will take empathy and respect for the river, as well as imagination, to see beyond the horizon, and have faith that the job can be done as it is passed on from one generation to the next.

Dr. Fisk also emphasized that the river has always been “owned” by its inhabitants, human and others. What’s different today is that “our waters now have legal standing.”

Most inspiring is the fact that today any person in any capacity can learn about the state of our inherited environment and how to leave it in better condition…with a certainty. It is beyond encouraging to see institutions of faith and science employing that great multiplier of institutional effort, collaboration, to achieve the same or comparable ends.

Note: A link to the video of the service and talk can be found on the blog at estuarymagazine.com; or better yet, so we can know of your interest, just send me a note to dick@estuarymagazine.com, and we’ll find a way to get it to you.
Subscribe Today
\