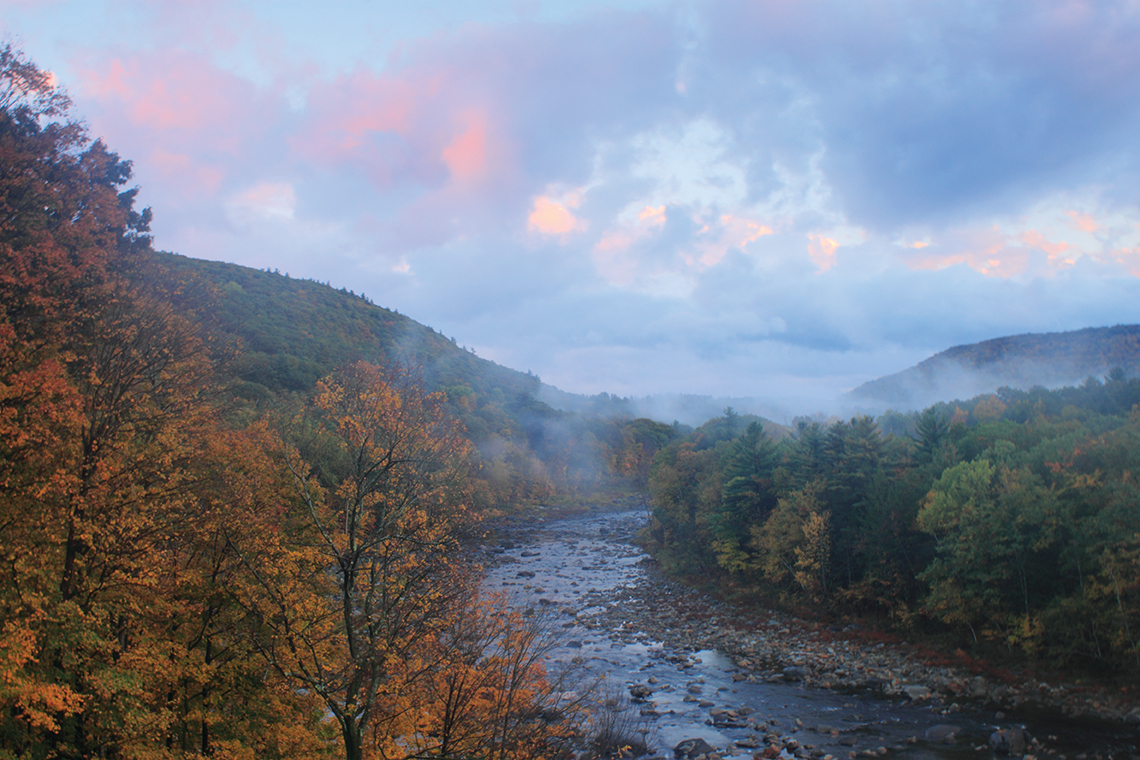 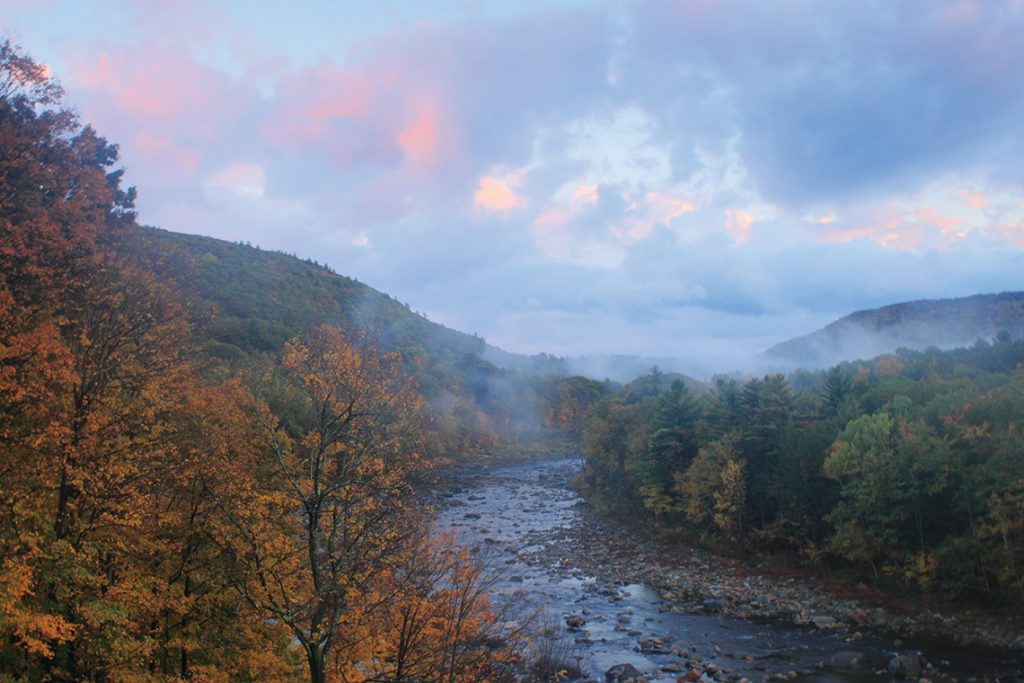 Story and Photos by John Burk

With a largely undeveloped watershed stretching from the Green Mountains of Vermont to the Berkshire Hills and Pioneer Valley in western Massachusetts, the Deerfield River is one of New England’s most picturesque and historically significant waterways. Despite its wild character, it is also a heavily used resource, and balancing various demands is a considerable challenge. 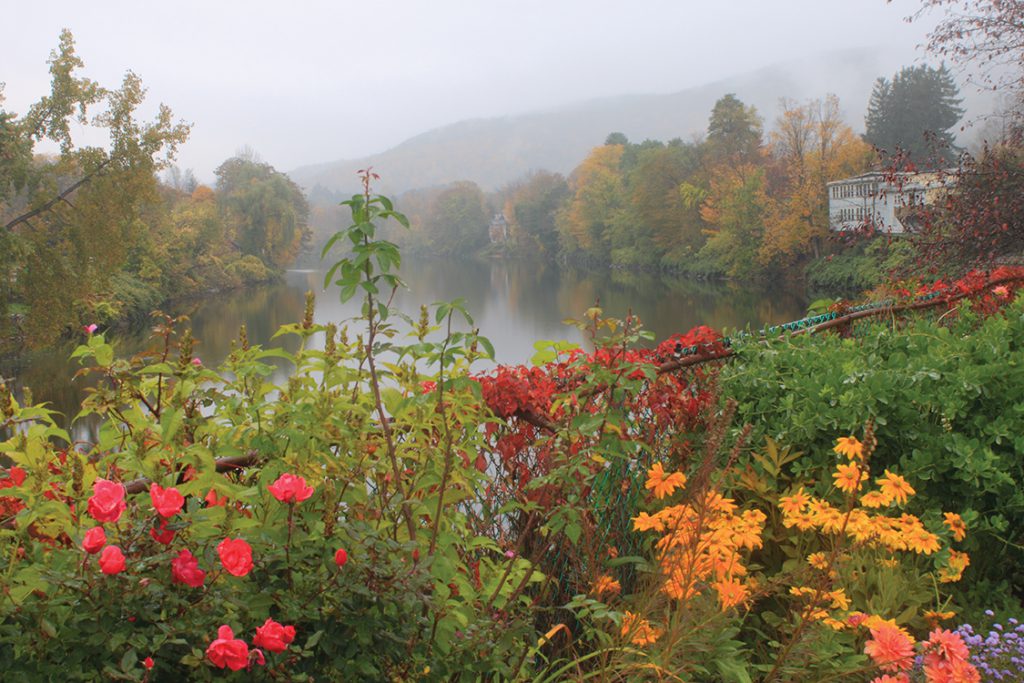 The Bridge of Flowers in Shelburne, MA, is a former trolley bridge that in 1929 was converted into a pedestrian bridge with multiple flower beds.

From headwaters in southern Vermont, the Deerfield River main stem flows roughly 70 miles to its confluence with the Connecticut River near Greenfield, Massachusetts. The 655-square-mile watershed encompasses 650 miles of rivers and streams, nine major tributaries, 49 lakes, and numerous natural and cultural attractions such as old-growth forests, waterfalls, Native American sites, scenic byways, and historic bridges. Fewer than 50,000 people reside in the 36-town basin, which is 80 percent forested with minimal development.

A network of headwater tributaries, several large reservoirs, and less-traveled Green Mountain National Forest lands highlight the upper basin in Vermont. The East Branch, the watershed’s northern extent, originates on the slopes of Stratton Mountain, the region’s highest summit and a landmark of the Appalachian and Long trails. Somerset Reservoir, built in 1913 for hydroelectric power, is one of the state’s wildest lakes. Secluded within a remote area of the national forest, it has undeveloped shores, twelve islands, and scenic mountain views. From the outlet, the East Branch flows 5.5 miles to its confluence with the main stem near Searsburg Reservoir.

Downstream in Wilmington and Whitingham, the main stem and North Branch converge at 2085-acre Harriman Reservoir (also known as Lake Whitingham), the watershed’s largest lake. Built in the 1920s, it fills an eight-mile-long valley with prime habitats for common loons, bald eagles, deer, bears, and other wildlife. An unusual circular funnel spillway, known as a “morning glory,” guides outflow beneath the dam. Low water levels reveal old foundations and home sites of Mountain Mills, a former logging village abandoned during the reservoir’s creation. 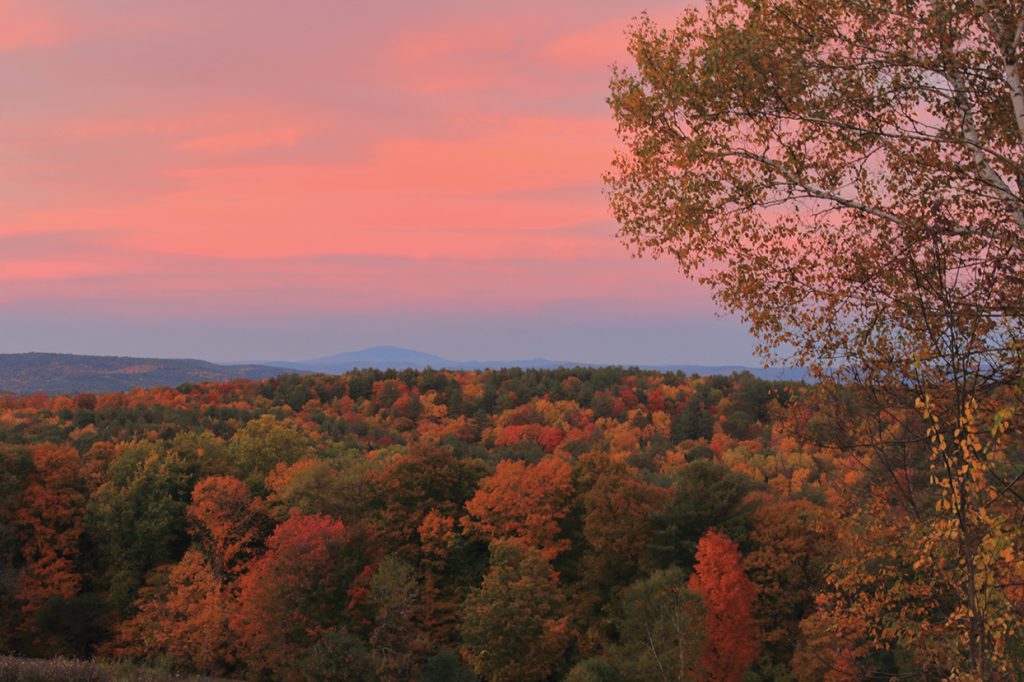 In the northern Berkshire Hills, the main stem slices through a deep valley on the east side of the Hoosac Mountain Range, where steep slopes rise as high as 1,000 feet above the riverbed. Much of the rugged terrain, unsuited to farming and development in historic times, lies within a large corridor of conservation land. Mohawk Trail State Forest, one of the region’s most scenic and ecologically significant preserves, protects an estimated 400 to 500 acres of old-growth woodlands. Many second-growth white pines, capped by a 176-foot specimen that may be New England’s tallest tree, are more than 150 feet high. A portion of the Mahican-Mohawk Trail, a long-distance trail being developed along historical Native American footpaths, crosses over Todd and Clark mountains.

Adjacent Monroe State Forest is home to more old and large trees—including a 160-foot white pine named for Henry David Thoreau—and backcountry trails that lead over Spruce Mountain and along the banks of rocky Dunbar Brook. Savoy Mountain State Forest, in the Hoosac Range uplands, features a ravine with two large waterfalls fed by tributaries of the Cold River.

From the confluence with the Cold River in Charlemont, the Deerfield assumes a mostly easterly course along the Mohawk Trail, a former Native American travel corridor that linked the Connecticut and Hudson river valleys. The route evolved over time to accommodate horses, wagons, and automobiles. The fabled Mohawk Trail Highway (Route 2), which celebrated its centennial in 2014, is known worldwide for scenic vistas and colorful fall foliage. Attractions of Shelburne Falls include the Bridge of Flowers, where more than 500 varieties of annuals and perennials provide colorful blooms from spring to fall, and distinctive potholes scoured by glaciers and flowing water over thousands of years. Nearby High Ledges Wildlife Sanctuary, a Mass Audubon property situated atop a steep ridge, features a scenic valley view and diverse wildflowers and plants.

The lower portion winds north through the upper Pioneer Valley, passing by fertile farm fields and the well-preserved Colonial-era buildings of Historic Deerfield village before emptying into the Connecticut River.

Often cited as “New England’s hardest-working river,” the Deerfield has been a heavily used and manipulated resource since the late eighteenth century. Nearly 120 mills operated on the lower portion alone by 1880. Thirty historic dam sites, roughly one impoundment every half-mile, have been documented on the South River, a major tributary in Massachusetts. Channel straightening, a common practice throughout the watershed, further impacted hydrology and natural communities by causing unnaturally high flows, habitat degradation, flooding, erosion, and sedimentation. 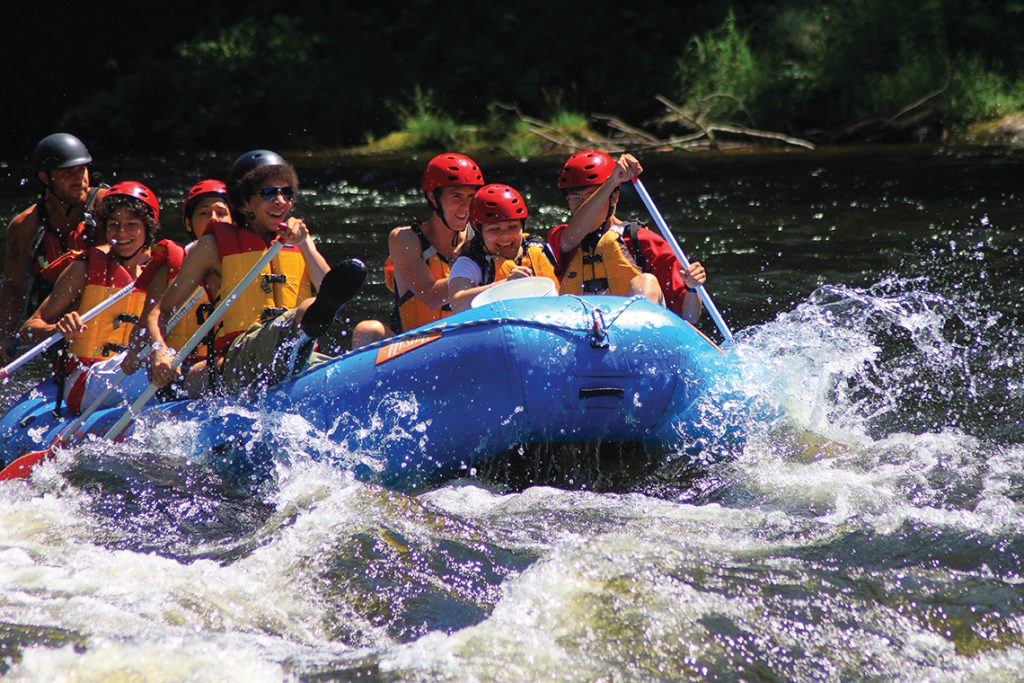 Hydroelectric development began in the early twentieth century, and three Federal Energy Regulatory Commission (FERC) licensed projects encompassing ten dams are presently spread along the Deerfield River’s course—an average of one large impoundment every seven miles. Great River Hydro owns most of the facilities including the Somerset, Searsburg, and Harriman dams in Vermont, and Sherman Dam and four stations in Massachusetts. At Bear Swamp Pumped Storage Development, adjacent to Station No. 5 Dam in Florida, Massachusetts, water impounded at Fife Brook Dam is conveyed to a reservoir atop Negus Mountain for release during peak electricity demand times.

The hydroelectric dams effectively control the Deerfield’s flow on a daily and seasonal basis. The longest unimpeded segment, downstream from Fife Brook Dam, is just 17 miles. To protect aquatic life and enhance recreational opportunities, the FERC mandated minimum flow requirements in a 1997 relicensing agreement. Fife Brook and Station No. 5 dams also provide scheduled whitewater releases from April to October annually. Though beneficial to boaters, whitewater and power generation releases have unnatural daily cycles of discharges and reduced flows, known as “hydropeaking.” A 2017 study by the Deerfield River Watershed Chapter of Trout Unlimited indicated adverse effects of fluctuations on trout reproduction. Seasonal flows are generally lower than unregulated rivers in spring, when runoff is stored at Somerset and Harriman reservoirs, and higher during summer, fall, and winter because of water releases.

In addition to the hydroelectric facilities on the main stem, numerous extant dams remain throughout the watershed in Massachusetts and Vermont, many of which are inactive, partially breached, or in disrepair. Abandoned dams have ongoing effects on aquatic communities, fish passage, and river flow, and damaged structures pose potential threats to communities.

Public use pressure is an increasingly significant concern, especially in a time of warming temperatures, internet and social media publicity of local spots, and the COVID-19 pandemic. 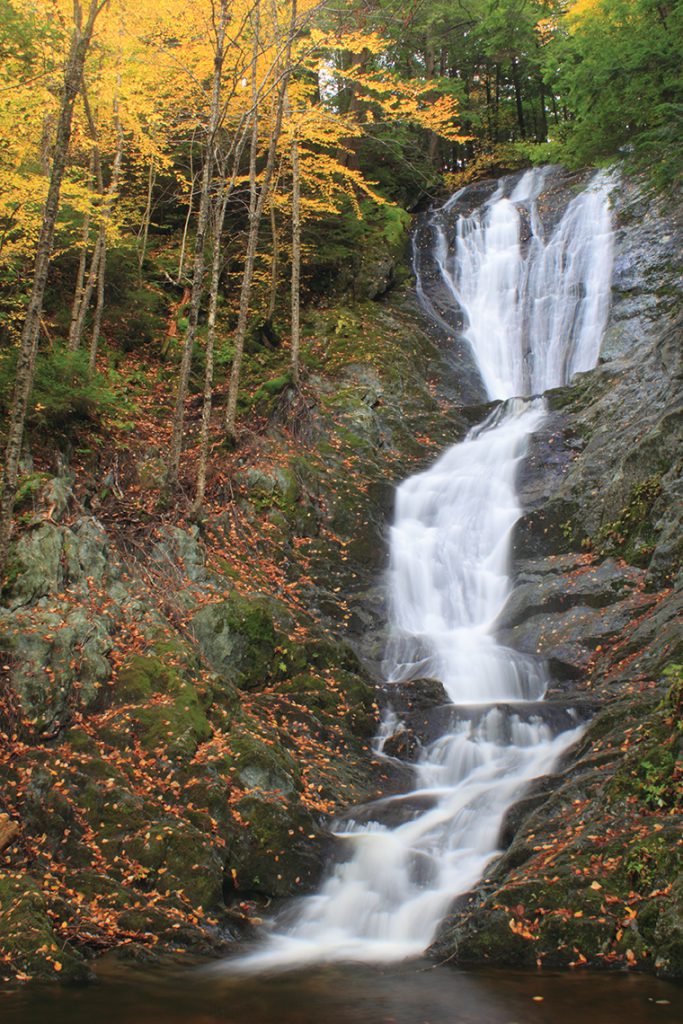 Popular reaches are often packed with crowds, tubes, and boaters on busy warm-weather weekends. Overcrowding has led to an uptake in littering, safety, parking problems, site closures, and environmental damage.

Storm resiliency is another important issue for many watershed landowners and communities, especially in the aftermath of Tropical Storm Irene, which caused historic damage in August 2011. Because of steep topography and shallow bedrock, the Deerfield and its tributaries are “flashy,” or prone to rapid rises. This was all too evident when Irene’s torrential rains, which fell on ground saturated from heavy precipitation that summer, caused catastrophic flooding and 275 landslides. Many roads and bridges, including a portion of the Mohawk Trail Highway, washed out, and farms suffered extensive soil and riparian buffer loss, thus increasing vulnerability to future damage.

Given ongoing demands, past and present human impacts, and potential climate change effects, long-term planning is crucial to the Deerfield River’s future. Deerfield River Watershed Association (DRWA) recently launched an initiative to cause portions of the river to be designated as a National Wild and Scenic River. According to DWRA Vice President Chris Curtis, “Designation could bring significant benefits to the river and its communities, including protecting free-flowing areas from new dams or impoundments, creating a management plan, and providing federal funds for river improvements or protection projects.”

DRWA reported substantial progress as of spring 2021, with widespread support from watershed communities, businesses, agencies, and Congressional representatives from Massachusetts and Vermont. The next step will be a federally funded planning study identifying and evaluating potential sections. Wild and Scenic designation, along with other efforts to improve watershed health and public access, will help sustain the Deerfield River as a resource for future generations.

For more information about the Deerfield River watershed, nearby trails, and other attractions: