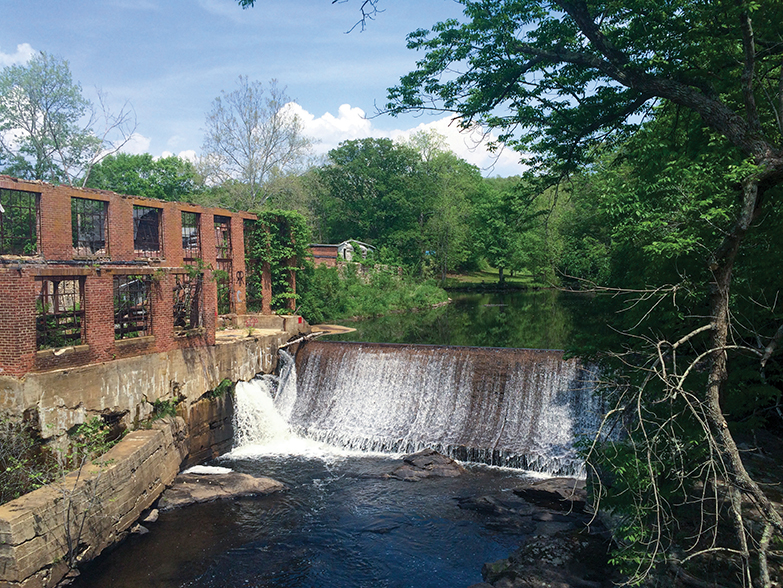 The Jeremy River in Colchester, CT, before the removal of the Norton Mill Dam in 2016 by The Nature Conservancy.

As we explore the fish runs of the Connecticut River valley in this column, dams will be a recurring theme. Why? Because from the moment European colonists first settled in the valley until the present time, dams have so profoundly impacted the nature of these runs. That impact has included two things that river aficionados hold dear: history and the environment.

The abundance of dams helped early settlers to survive, and later residents to prosper and create economies and cultures that would shape New England and beyond. Dams were the advanced technology of the early times, using falling water to do work, which included making paper, textiles, tools, and consumer products of every imaginable description. The falling water turned wheels, which turned gears and belts, which turned machine parts, which made things. However, to have falling water, one needed a change in elevation—at the location of the proposed industrial use. If a natural waterfall was not available, millwrights would make their own by building a dam across a stream that backed up water to the height of the dam.

The first dams were for local utilitarian uses: a sawmill to create lumber to build houses; a gristmill to grind grain for bread; an ice pond to create ice that was cut and stored in icehouses and used to preserve food, including shipments of fish sent to the Midwest. Nearly every town in the valley had these dams.

During the Industrial Revolution, larger dams were built, often over existing small mill dams, to manufacture things, such as in the Coginchaug River where water-powered industries produced swords, pistols, and rifles. The Connecticut River was famous for its log drives in which massive amounts of trees were cut from the north woods in Vermont and New Hampshire and floated downstream to mill dams such as Bellows Falls, Vermont; Turners Falls, and Holyoke, Massachusetts; and Windsor Locks, Connecticut; all of which were driven by hydromechanical power. In the 1900s, more dams sprang up for flood protection, water supply, and hydroelectric power, some of which took over old mill sites. In the 1930s, more dams were built through the Works Program Administration, part of the New Deal.

All of these wealth-producing dams had huge ecological impacts on our river, the most obvious being the blockage of spawning runs of migratory fish from the ocean. Whenever a dam was built, the spawning habitat upstream of the dam became inaccessible. Atlantic salmon, American shad, alewife, blueback herring, Atlantic sturgeon, shortnose sturgeon, sea lamprey, and striped bass all suffered, but all—besides the salmon—had some remaining habitat below the lowermost dam and managed to hang on, although with dramatically reduced numbers. By the War of 1812, salmon, which need to reach the shallow, cold, rocky streams of the headwaters, had totally disappeared from the Connecticut River.

There were other impacts, too. Dams converted stream habitat from one type (flowing stream) to another (deep lake-like pool), favoring some species such as non-native sunfish while jeopardizing others like native trout and some species of now-endangered mussels. Behind a dam the current slowed, warmed up and lost oxygen. Stream beds became choked with trapped sediment that previously, unimpeded, would have moved downstream to nourish coastal marshes and beaches. Aquatic vegetation grew in areas where it had not previously.

Times changed and industry evolved. No longer is hydromechanical power being used to produce widgets. Paper and textile industries have largely moved south and are now powered by electricity,  just like your refrigerator, which once required an ice block. Today, all but the largest hydroelectric plants have shut down because they are no longer economical.

Still, thousands of dams exist. Most are unused and unmaintained, passed on through a series of owners who had nothing to do with their creation and who often just “inherited” the dams when they bought the old mill building or the land around it. Unlike the old millwrights, the new owners don’t think they have to maintain these structures and may even be unaware they own a dam. These structures, many which are over 150 years old, have become ticking time bombs. Each state has an agency that regulates dams and tries to ensure owners keep them in good shape, but dam failures are common, and when a large one fails, downstream property and lives are at stake. In 1874, a large dam on the Mill River in Williamsburg, Massachusetts, collapsed, destroying entire villages and killing 139 people. In 1955, hurricanes caused extensive damage in Connecticut resulting in the failure of 200 dams. It takes diligence by government agencies and money from dam owners to prevent these failures. 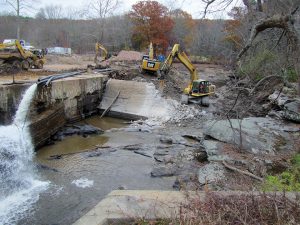 The Jeremy River in Colchester, CT, during the removal of the Norton Mill Dam in 2016 by The Nature Conservancy.

In recognition of the environmental impacts and public safety concerns, there is a growing worldwide movement to remove unneeded dams, including in the Connecticut River valley. Examples of removals include: the Homestead Woolen Mill Dam in Swanzey, New Hampshire; Vermont dams in East Burke, Grafton, and two in Dummerston; the first dam on the Fall River in Gill, Massachusetts, and the Amethyst Brook Dam in Pelham, Massachusetts. In Connecticut, the Springborn (Enfield), Spoonville (East Granby), Norton Mill (Colchester), and Ed Bill (Lyme) dams have been removed and either one or both of us were involved in each, Sally as a project manager and Steve as a technical advisor.

Dam removal projects take a long time to complete. First, a trusting relationship must be forged between a willing dam owner and the group that proposes to take on the project. Next, funding needs to be secured, often requiring grants. Removal of a dam requires permits (often both state and federal) and therefore, each project requires an engineered plan. Once funding is secured, an engineering firm needs to be hired. The engineer’s work will include surveys, inspections, sediment collection and analysis, and hydrologic and hydraulic modeling. 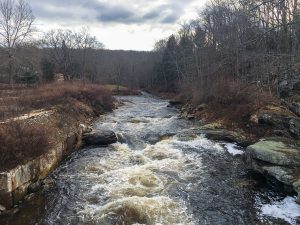 The Jeremy River in Colchester, CT, after the removal of the Norton Mill Dam in 2016 by The Nature Conservancy.

The impact of the proposed removal must be projected in terms of changes in water level and velocity, changes in habitat, impacts to infrastructure such as underwater footings of upstream bridges, and to the slope and stability of the streambed. If a dam is being removed to allow fish to go upstream, the morphology of the new streambed must be restored properly to allow that. Once the plan is permitted, the team needs to bid the job to a construction company, that, once hired, will oversee the final dismantling. All of this could take between four and ten years to complete.

The results can be spectacular. A stagnant, weed-choked pond is restored to flowing stream surrounded by a floodplain meadow full of native grasses and trees with nesting birds. The gurgling, oxygen-rich stream hosts stream fish long absent. The Norton Mill dam removal opened up 17 miles of habitat to migratory fish for the first time in nearly 300 years.

What are the obstacles? Initially, some dam owners or their neighbors, who are used to the dams’ presence, do not want to consider removal. Often they fear loss of flood protection (however, none of these dams offer flood control); the emergence of permanent stinky, mudflats (actually, the exposed soil quickly greens up on its own due to long dormant seeds held in the mud); or even the loss of all water (they don’t realize the stream flowing through the impoundment continues to flow).

We find with these projects that slow, deliberate education is the best course of action. With patience, we have been able to garner the support of communities, which have been universally pleased with the final outcomes. Dam owners who wish to learn more about dam removals can contact their state dam safety agency or an engaged conservation group like the Connecticut River Conservancy (www.ctriver.org), or us (riverworkllc@gmail.com).