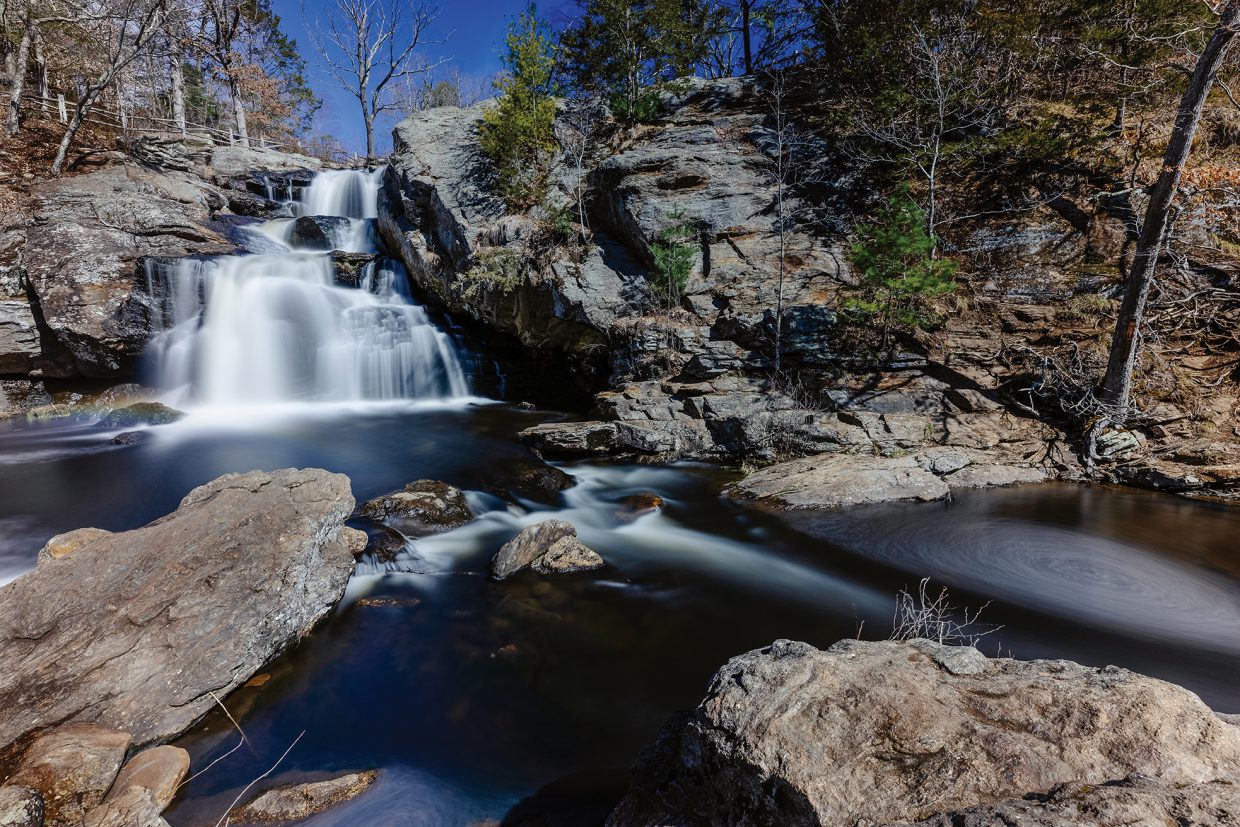 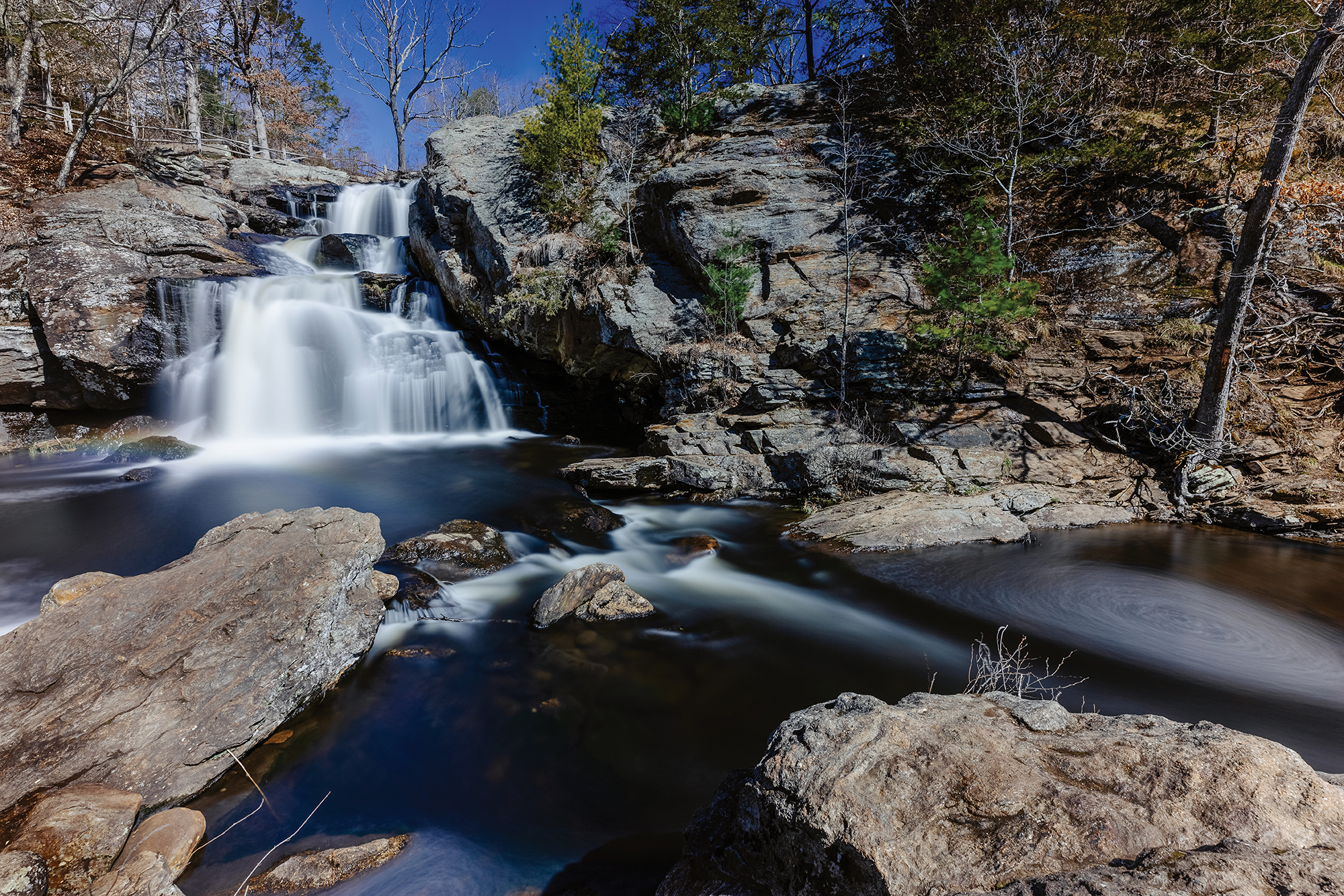 The Eightmile River plunges over Chapman Falls in Devil’s Hopyard State Park in East Haddam, CT. The river is a centerpiece of the park and the 60-foot falls are iconic.

HOW A GROUP OF VOLUNTEERS PROTECTED THE

David Bingham always knew the Eightmile River was someplace special. Born within walking distance of it, in Salem, Connecticut, he has seen hundreds of bird and animal species along its banks—and in adjacent fields, ponds, swamps, and forests. He has canoed and fished the river. In the dead of winter, he has cross-country skied atop its frozen crust.

Bingham, 80, has spied many splendored things along the Eightmile River through the decades: such as otter and mink, cerulean warblers and bald eagles, bobcat and black bear scat. Native brook trout still inhabit the river’s 14-mile run: from Salem and East Haddam down to Hamburg Cove in Lyme—thence into the Connecticut River. The tributary gets its name from the fact that it meets the big river eight miles north of Long Island Sound.

There has never been any doubt: the Eightmile River and its sparsely populated environs are pristine and picturesque—wild and scenic, if you will. No rigorous multi-year study is needed to prove that.

But that’s just what Bingham, and hundreds like him in southeastern Connecticut, undertook twenty years ago. They launched a comprehensive scientific survey that scrutinized the Eightmile River from stem to stern, top to bottom, bank to bank. They tested water quality, mapped key ecological features, catalogued flora and fauna, even examined the minute macroinvertebrates that inhabit the watershed.

One day, early in this century, Bingham waded down the entire east branch of the Eightmile River, for five soggy miles, like a migrating herring. “I was looking for human impacts, adverse effects, any pollution, such as people whose lawns went right up to the riverbanks,” he said.

After he dried out, he gave that stretch of the river a clean bill of health.

Through reports like Bingham’s, the locals aimed to convince the federal government of this self-evident truth: the Eightmile River, both its main stem and east branch, along with its adjacent 40,000 bucolic acres, represented a “Wild and Scenic Watershed” that is worthy of recognition and protection. In 2006, they produced an impressive 100-plus-page management plan, bristling with information and resplendent with colorful charts and maps. 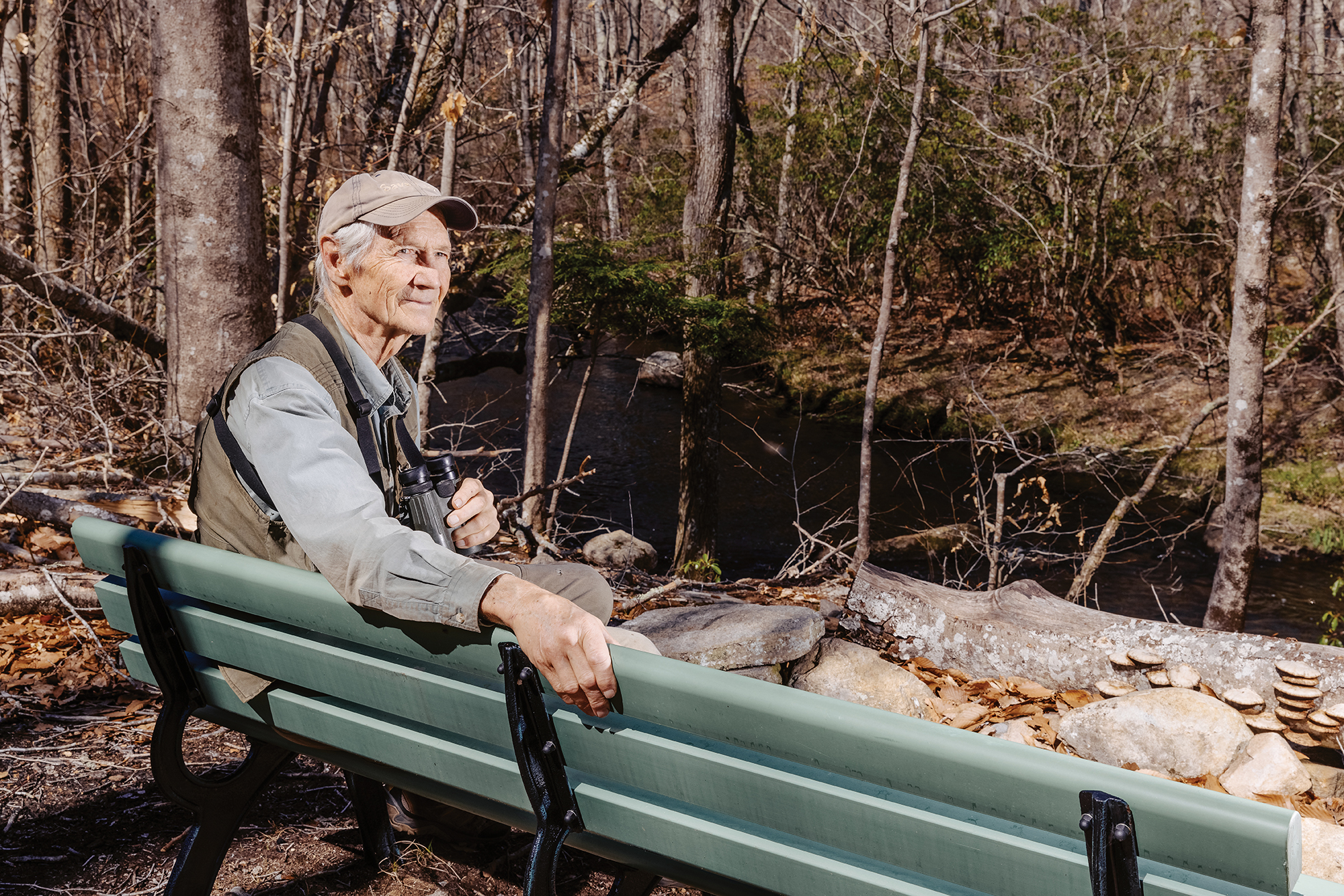 David Bingham sits on a bench next to the East Branch Eightmile River in the Riverside Preserve in Salem, CT. Bingham donated about six acres of family land to the Salem Land Trust to conserve the area. The bench was placed with a grant from the Eightmile River Wild and Scenic Coordinating Committee.

In 1968, the US Congress passed the National Wild and Scenic Rivers System Act “to preserve certain rivers with outstanding natural, cultural, and recreational values in a free-flowing condition for the enjoyment of present and future generations.” To date, 266 rivers have been so designated by the US Park Service, about one out of every 200 nationwide.

But before convincing Uncle Sam, true believers like Bingham had to convince themselves, and at least a majority of their fellow citizens. The river runs through five towns in Connecticut, primarily East Haddam, Lyme, and Salem. These three would need to agree on how best to cooperate on protecting the resource they shared. But getting independent-minded Connecticut townships to agree can be like herding bobcats.

Initially, during the 1990s, the idea had been for the three municipalities to protect the river all by themselves, with the help of The Nature Conservancy and University of Connecticut Cooperative Extension System. When the latter dropped out of the effort, Anthony Irving of Lyme, who would later chair the Eightmile Wild and Scenic Study Committee, and Nathan Frohling, of The Nature Conservancy, got to brainstorming.

What now? How best to get the three towns on the same conservation page without UConn? Frohling had an idea. He had been involved in the effort to have Connecticut’s Farmington River designated as Wild and Scenic in 1994, the first non-government-controlled waterway to be so recognized. Why not try that for the Eightmile? It would not be an easy process, but it would give the three towns a shared goal, and if successful, it would provide federal assistance and funding to protect the river, its tributaries, and the watershed.

As this new century dawned, the locals started to coalesce on this mission. Republicans and Democrats like then Second District US Congressman Rob Simmons and former Connecticut Senator Christopher Dodd pitched in. A big step in the process was when the three town’s respective zoning commissions agreed to identical regulations that would provide a 100-foot protective buffer along the banks of the Eightmile River, and a 50-foot setback for small feeder streams. 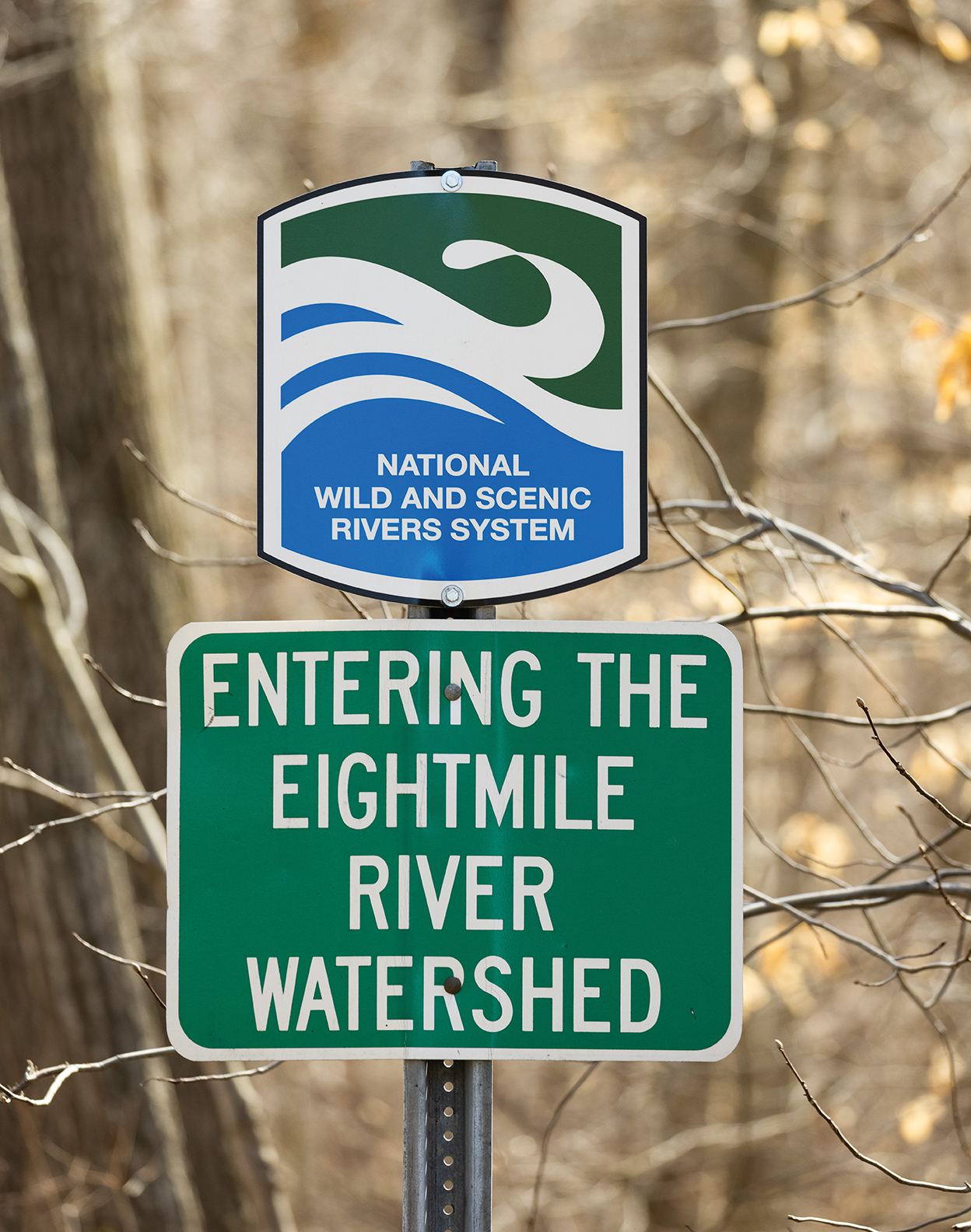 A road side sign informs drivers as they enter the Eightmile River watershed along Route 82 in East Haddam, CT.

Facts about the
Eightmile River Watershed 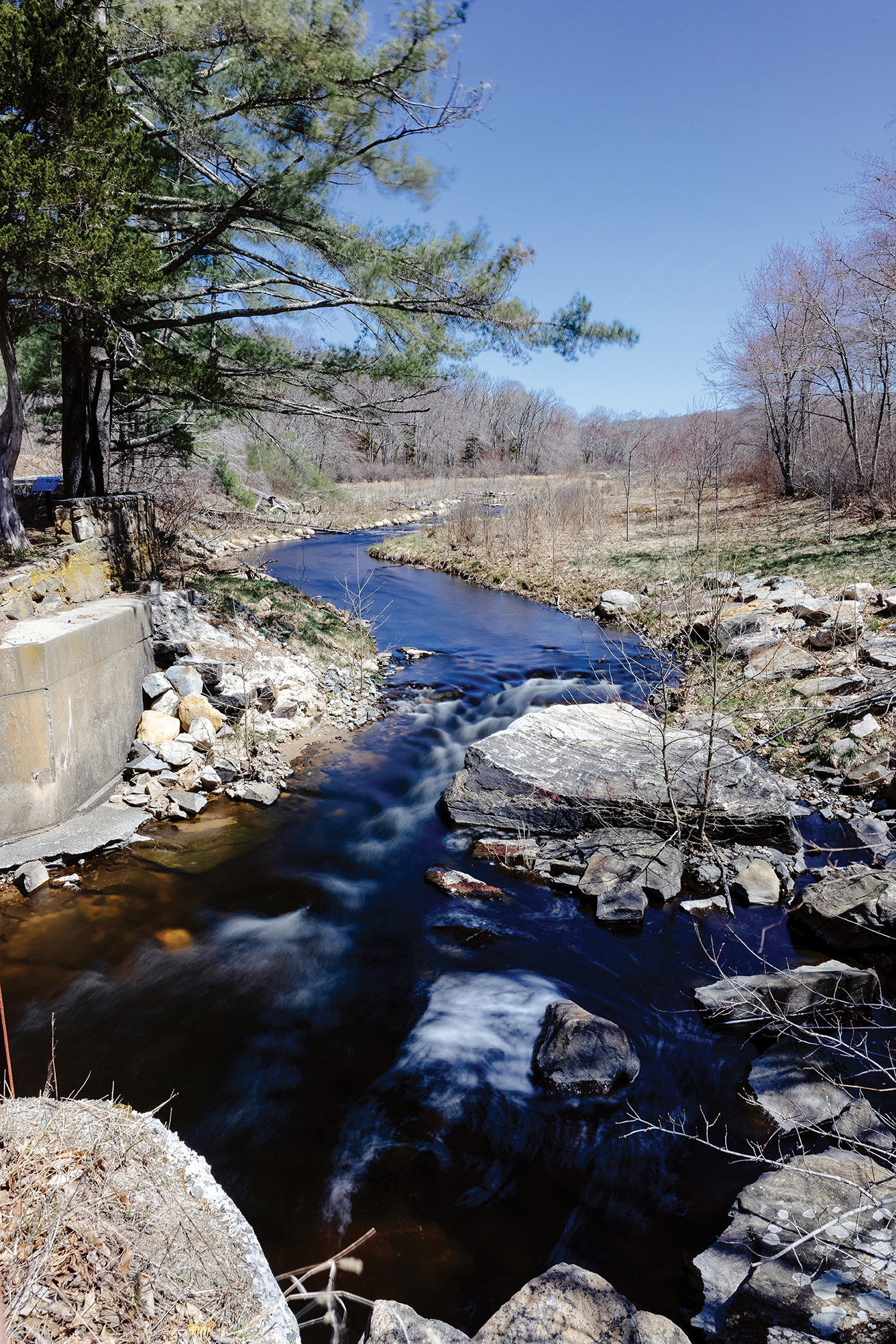 The East Branch Eightmile River flows through the former Ed Bills Pond area in Lyme, CT. The dam’s owner worked with The Nature Conservancy, the Connecticut Department of Energy and Environmental Protection, the Town of Lyme, and others to have the dam removed and the habit restored. In 2015, the privately owned dam was removed. The dam was the third to be removed in the Eightmile River watershed.

Voters in all three towns gave the green light to the Wild and Scenic application. The fact that the designation, if achieved, would not entail any new federal regulatory authority was an important factor. In fact, the federal government would provide annual funding for a local “coordinating committee” to monitor the river’s health and promulgate local conservation and educational projects. Having a Wild and Scenic River also would improve the chances of the three towns obtaining conservation grants.

Jamie Fosburgh of the National Park Service, who is the towns’ contact person with the federal government, saw the nearly decade-long journey as being as important as the destination: “The Wild and Scenic process is a great vehicle for bringing communities together, to share expertise and knowledge, to work together, coordinate, bringing towns and partner organizations together around a vision for a resource. For me, that’s the first thing, where all this starts.”

What started in one century came to a happy ending in another, on May 8, 2008, when the Eightmile River earned its official federal designation as a Wild and Scenic River. It is one of only four Wild and Scenic Rivers in Connecticut, and one of only three connected to the full extent of the Connecticut River, and, finally, one of 13 in New England.

Now, 13 years on, the question is: What has this salubrious sobriquet wrought? For starters, it established an Eightmile River Wild and Scenic Coordinating Committee, also chaired by Anthony Irving, with two part-time staffers overseeing an array of environmental programs. With an annual budget of $150,000 from the National Park Service, the committee monitors the health of the watershed, initiates and supports educational programs for the public and local school children, and partners with area businesses to tout the region as a recreational destination.

As noted earlier, there is much to promote. Of the watershed’s 62 square miles, a remarkable 40 percent of the land is permanently protected, either through conservation easements, state and town parks and open space, and preserves established by local land trusts and The Nature Conservancy (TNC).

Indeed, the TNC has declared the entire lower Connecticut River Watershed, including the Eightmile River, as one of “The 40 Last Great Places” in the Western Hemisphere and has purchased thousands of acres of conservation land in East Haddam, Lyme, and Salem. In addition, the Eightmile River Watershed is almost entirely within Connecticut Audubon’s 60,000-acre Lyme Forest Block, one of a number of “Important Bird Areas” that the organization has identified and promotes in the state.

The Wild and Scenic designation also means that any major project that involves federal funding will receive additional scrutiny.

“It provides protection for any federally funded activity going on within the watershed,” Irving said. “The feds have to take the designation into consideration, and we can also call on the National Park Service and the Army Corps of Engineers for any issues that we think warrant their examination, for example, a proposed new bridge project where federal money is involved.” 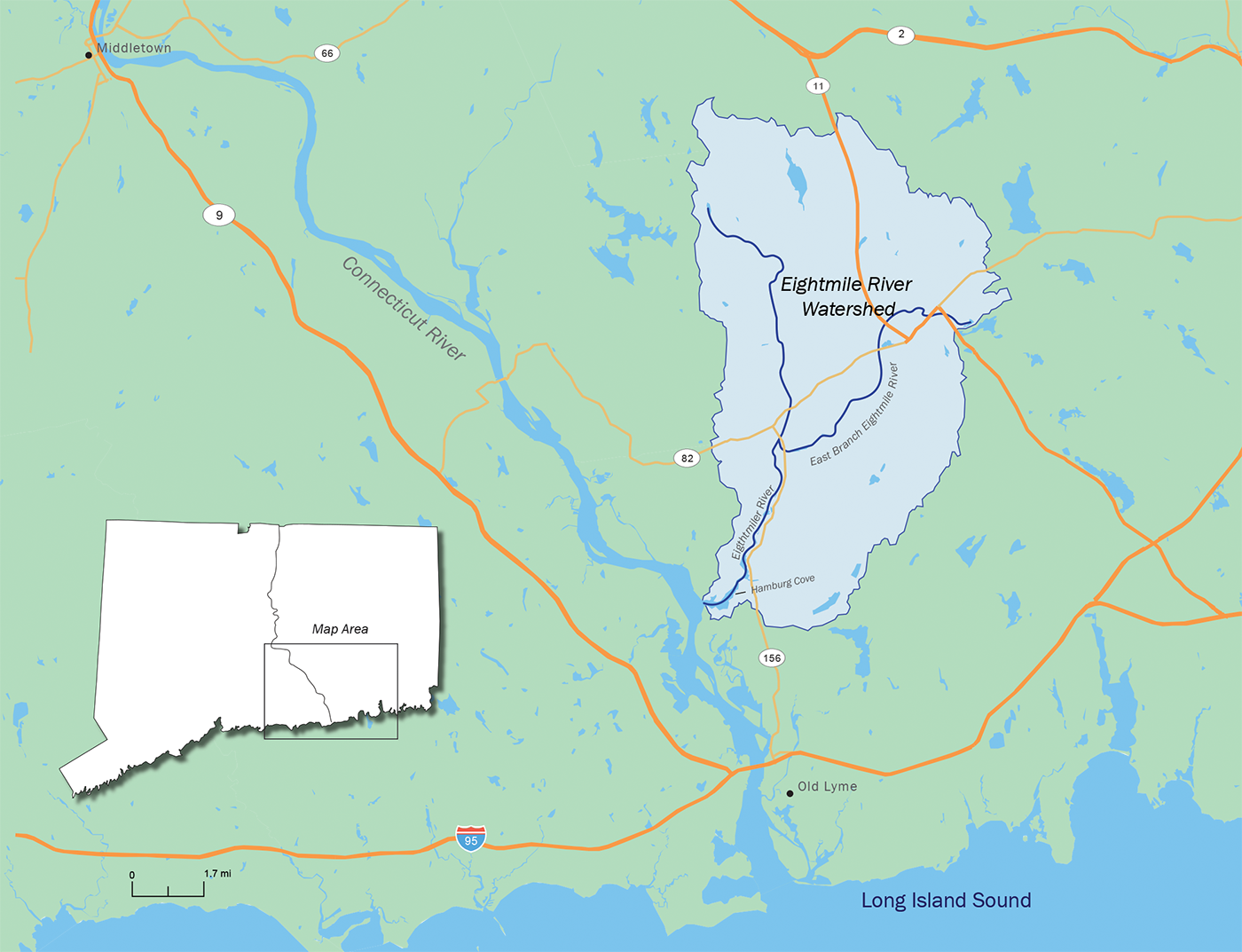 It is worth noting in the context of protection of the watershed that 60 years ago the east branch of the Eightmile was under consideration to be dammed to create a reservoir for the city of New London.

In fact, one of the improvements to the Eightmile River that have occurred since 2008 is the removal of a number of small dams along the river, making it flow even freer for whitewater kayakers and migrating fish alike.

Besides preservation of the riverine resource, the Eightmile River Wild and Scenic Coordinating Committee has an educational mission.

“We just did a program with the seventh-grade classes at the East Haddam Middle School, on storm water, how to keep runoff and pollution out of the river,” said Patricia Young, who is the program director for the committee. She and environmental program coordinator Riley Doherty interact with local communities in a variety of ways, directly and indirectly.

The committee budget, for example, provides grant funding to area nature centers, museums, schools, and land trusts. River Fest, a popular daylong celebration of the Eightmile River at Devil’s Hopyard State Park, was a 2020 COVID casualty, but the committee hopes to host it this fall.

Recently, a vividly illustrated map of the watershed denoting all of its wild places—a remarkable 44—that people can explore was mailed to every resident of Salem, Lyme, and East Haddam.

For those who think conservation is for the birds, this fetching fold-out map denotes the myriad activities that people can pursue on or about the Eightmile River: including horseback riding, fishing and hunting, kayaking, mountain biking, snow shoeing, cross-country skiing, hiking, trail running—not to mention bird watching. 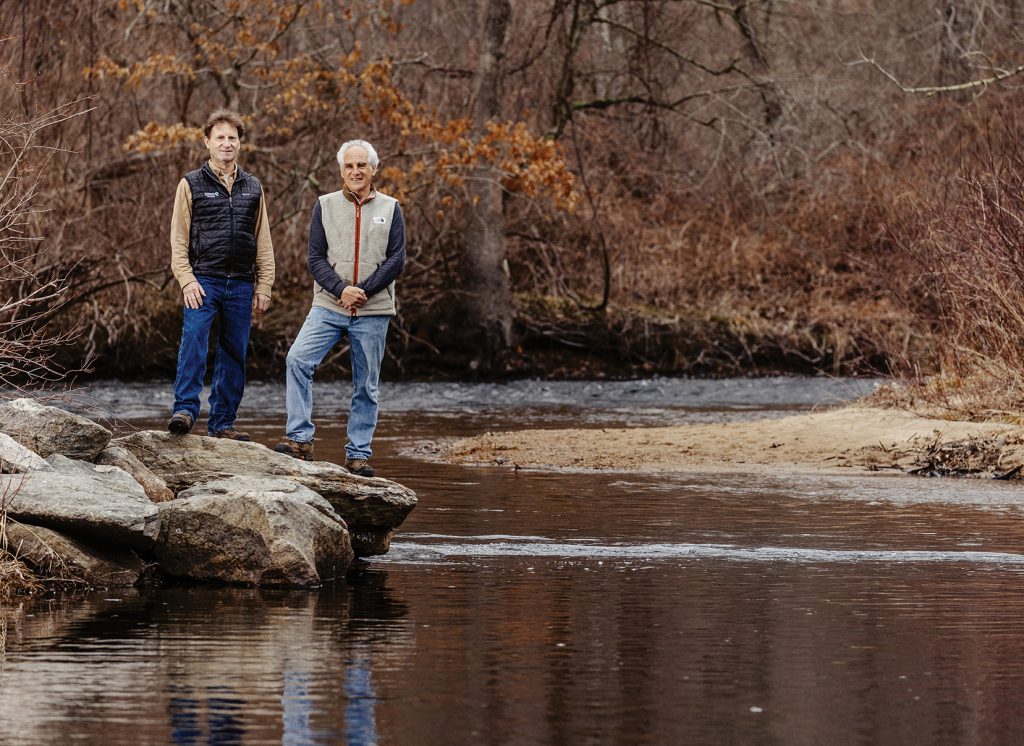 Nathan Frohling, left, of The Nature Conservancy and Anthony Irving, who chaired the study committee, worked together to brainstorm and start the process toward Wild and Scenic designation. Here, they pose for a photo together on a rock outcropping in the Eightmile River in Lyme, CT. 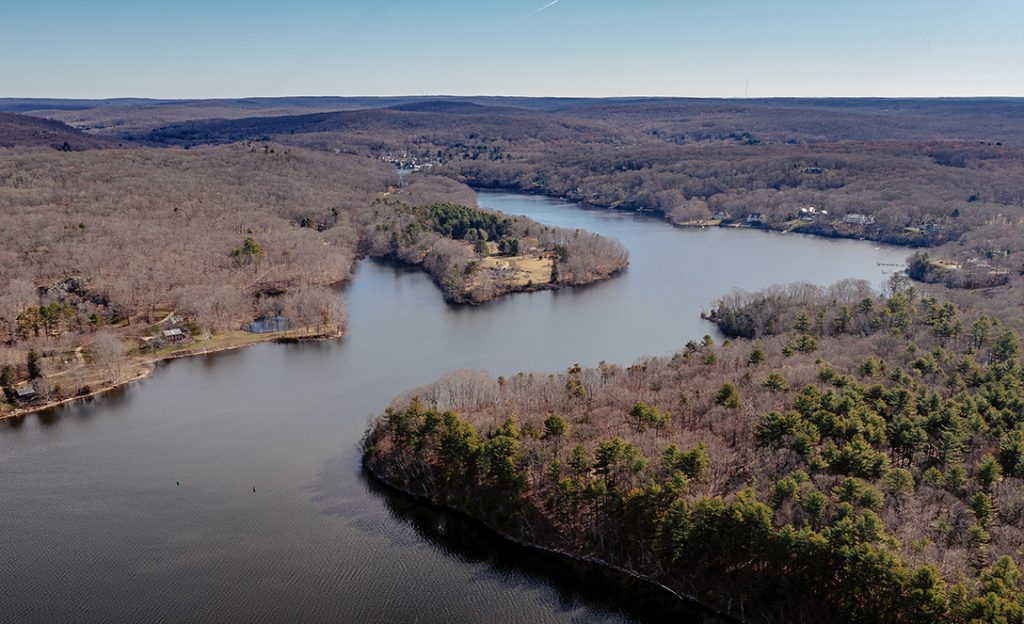 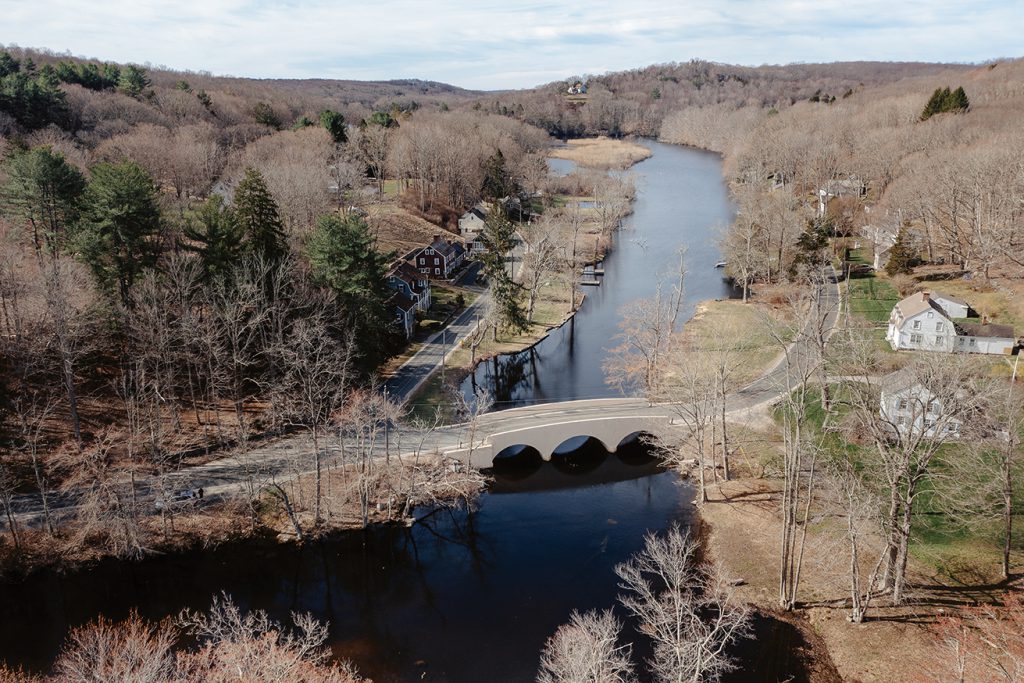 Old colonial homes line the banks of the Eightmile River in the Hamburg Bridge Historic District, locally known as Reed’s Landing, where Joshuatown Road crosses the river in Lyme, CT. The first bridge across the Eightmile River was built here in circa 1759. It was the northern most navigable point on the river for ships to reach in the 18th and early 19th centuries. The area is listed on the National Register of Historic Places. 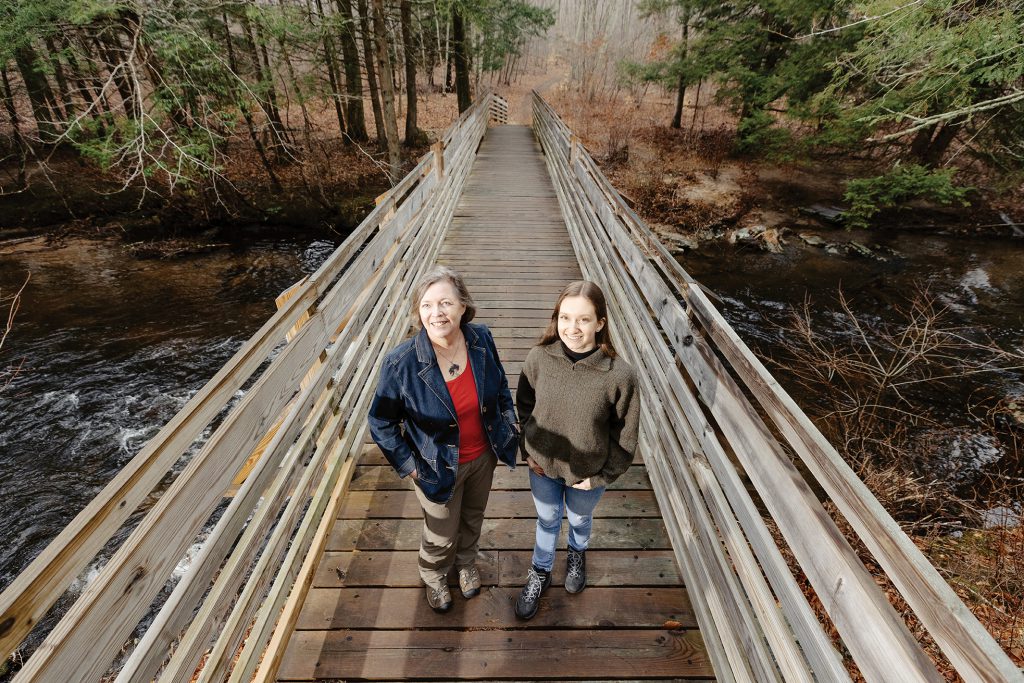