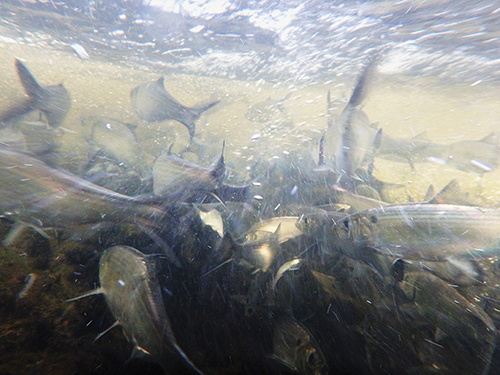 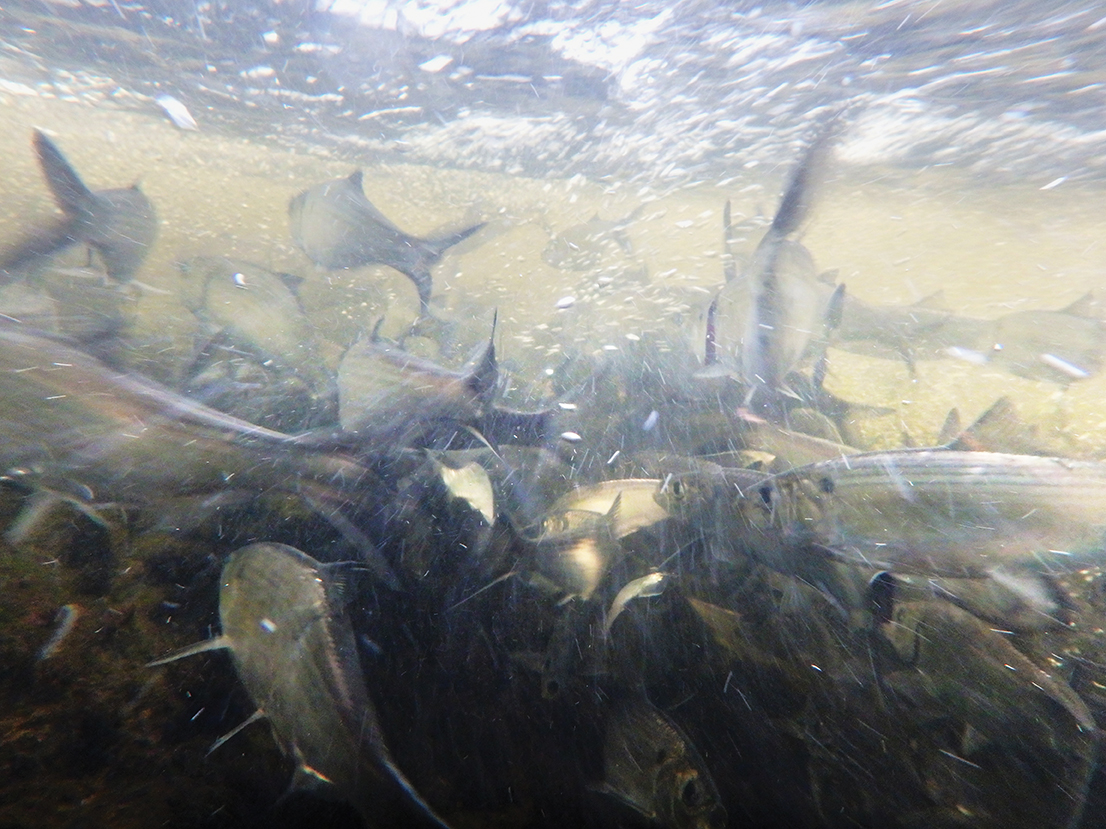 A school of blueback herring spawns as a group in fast flowing water.

The diadromous fish spawning runs of the watershed

It seemed like just another spring day when we stopped at the Salmon River, a tidewater tributary of the Connecticut River that splits the towns of Haddam and East Haddam, Connecticut. As we sat on rocks in our wetsuits making final adjustments to our dive masks, we noticed an osprey chirping nervously from the top of a tall scraggly hemlock across the river and as we approached the river’s edge, we scared off a couple of black-crowned night herons.

We exchanged knowing looks as we slipped into the river. The fish were “in.” The birds told the tale. Rather quickly, we found ourselves surrounded by a school of foot-long silvery fish—blueback herring— that were nervously darting away and then drifting back with the current. We would soon discover that they were not alone. 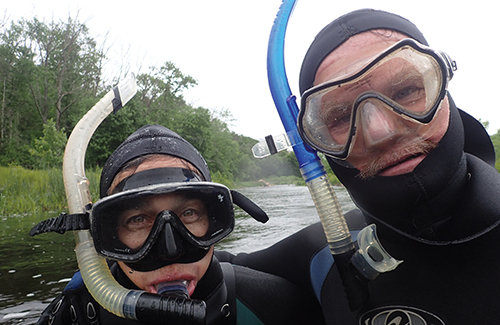 The construction of dams blocked migrations, wiped out the salmon runs, and decimated the populations of the other species, but reduced runs still persist, as witnessed during our snorkeling on this early June day.

The migration of each of these species is unique in terms of time of year, time of day, environmental triggers, and preferred spawning habitat. Some species, such as American shad and the two sturgeons, tend to stay in the mainstem Connecticut River where space is unbounded and the water murky, making observation by snorkelers impossible. Blueback herring, however, push up into the tributary streams as far as they can go, often surpassing the turbid, tidal waters and entering the clear waters of smaller streams such as the trout-laden Salmon River. On this day, the two of us were there to see what species were present and estimate their abundance.

Many fish move upstream in the spring, and the streams are full of perch, bass, trout, suckers, and various species of minnows. They congregate below dams, waterfalls, and rapids. When schools of these diadromous visitors arrive from the sea, things get very busy and exciting. Many are there to spawn, some are there to graze, some are there to feed on the spawners and grazers, some are there to do a bit of everything—and, with luck, we’re there to watch. All of this takes place underwater with few clues available to those relegated to the riverbanks, although nothing escapes the attention of the fish-eaters: the night herons, ospreys, eagles, kingfishers, great blue herons, and even owls. 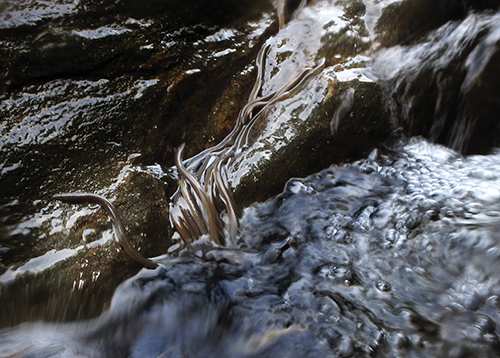 American eel “elvers” leave the safety of the deeper water into a trickle over an obstacle to continue their upstream migration.

Fish migrations begin in early April and typically are over by the end of June, but the fish are not always present. There are pulses or waves of migration. First the alewives come and go, then the bluebacks and white perch, accompanied by the striped bass; incoming eels show up en masse in early June, and the sea lampreys finish spawning in late June. Earlier we had seen blueback herring spawning there, but none had been seen since. Following a general warming trend, today was the first day they had returned. They may only be here for another day or two, so we jumped in at the opportunity.

We sat in a quiet side area to allow our bodies to warm the chilled water seeping through our wetsuits and watched smallmouth bass sitting on circular sand and fine gravel nests. The blueback herring seemed unfocused and meandering, playing follow-the-leader in the shallow water, followed by a handful of “wait-for-me” white perch.

Face down, we kicked across the shallow pool to a line of large boulders over which the clear, cold water was surging so powerfully it almost wrestled off our masks. As we surmounted the rise, we were suddenly in the midst of over a thousand blueback herring, mostly aligned and spawning—darting in and out, around and about, up and down in an undulating mass of silvery, flashing forms. If we focused clearly enough for a split second, we saw translucent eggs rushing past us, which were slightly smaller than a pinhead. Later, when we emerged, we’d find many stuck to our wetsuits. Common shiners and fallfish, two minnow species, were darting in and out of the mob, eating eggs that were adrift. We hung on to rocks to prevent being swept downstream and tried to photograph and observe the spawning. The water was only two-and-a-half-feet deep, but the current was powerful.

Grabbing boulders and jagged edges of ledge, we pulled ourselves across the stream to where water cascaded over a bedrock drop. There was a quiet area where smaller fish took refuge from both the current and the predators. Tessellated darters an inch and a half long mingled with a school of spottail shiners and a few sunfish that probably washed down from an upstream pond. A bewildered brook trout kept us at arm’s length, and we decided not to investigate too closely when we saw the head of a sizable snapping turtle peering out from beneath an underwater overhang.

Our attention was drawn to a pocket of fine, soft sand that has accumulated below the ledge. While we admired the specks of rose-colored garnets collecting on the downstream side of a large rock, we noticed movement in the sand. When we slid our outstretched fingers into the loose sand, suddenly four little American eels wiggled out and darted for the cover of nearby rocks. The eel has a life history opposite of most of these migratory species that come into freshwater streams to spawn.

Eels spawn in the ocean, and their tiny offspring ride the Gulf Stream north and colonize all manner of freshwater habitats. These eels arrived at the mouth of the Connecticut River at Old Saybrook as transparent “glass eels” in February or March and had just arrived here, nearly 20 miles upstream. Now they were a light green, two to three inches long, and called “elvers.” They were amassing below these rapids before climbing over the ledge to continue their upstream migration. Historically, American eels migrated all the way to the Connecticut Lakes in New Hampshire, over 400 miles north of Long Island Sound. They are here to eat, grow, and mature.

Most of the eels that end up in upstream habitats are female while the males stay below in tidal and low elevation areas. The females may stay in freshwater for 20 years before departing for the sea. That day, we watched as they climbed spray-drenched rocks and worked themselves into crevices to get over the dam and proceed upstream. Such daytime observations are rare. Usually, one must venture out after dark to see this spectacle. Perhaps our presence had scared away a common elver predator: grackles!

We let the current carry our buoyant bodies downstream, but as we passed the gravel flats, we stopped to observe nesting sea lampreys. These snake-like fish that parasitize fish in the ocean are native in New England and, dead or alive, are a beneficial part of the ecosystem. Bald eagles snatch spawning lampreys from their shallow nests, and macroinvertebrates feed on their decaying bodies.

These gold and brown mottled fish were most fascinating to watch as the mating pair created a nest. They used their sucker-like mouths to drag and then deposit rocks the size of tennis balls. They created a round hollow with a downstream berm that will be used by minnows to spawn and feed. After the actual spawning in which the male wraps itself around the female, the fish will slowly drift away and within a few days die. Their young will emerge from the substrate the following year.

It’s easy to lose track of time, and after an hour, our body temperatures fell; it was time to get out. We floated downstream through pools filled with tired white suckers and yellow perch and watched large striped bass chase small groups of blueback herring. As we swam back upstream at the river’s edge, we entered a shallow area that is home to various species of freshwater mussels including the eastern pearlshell; we observed a few rock bass, a crayfish in the moss, and a wood turtle trying to stay out of the current. We left the stream in the hands of the night crew: more spawning blueback herring, emerging hordes of ascending elvers, channel catfish moving in to suck up errant eggs, and black-crowned night herons looking for inattentive herring.