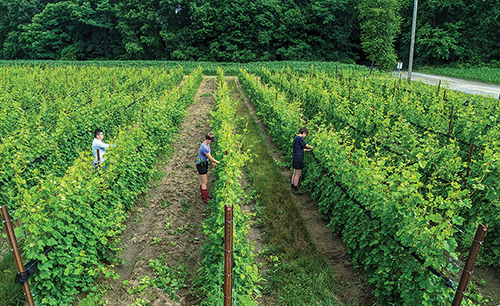 Subscribe Today
The Taste of Home
Celebrating the Surprising Vineyards of the Connecticut River Valley
By Eric D. Lehman and Amy Nawrocki 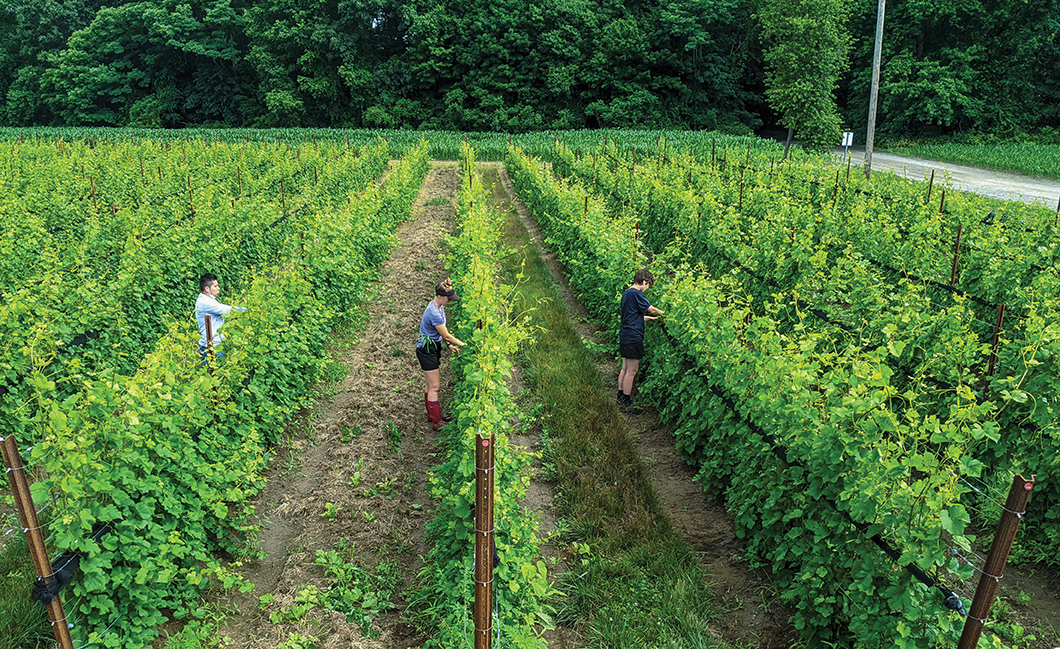 Driving up Poocham Road into the hills of Westmoreland, New Hampshire, the Connecticut River valley spreads out north and south. Following Ox Brook, you rise above the gray ribbon of the Connecticut River and find yourself passing into a nook of green trees amidst the hills, flanked by soft ridges. It is a view that you might expect in New England, except for the foreground: suddenly you find yourself among the frontenac gris and St. Croix grape vines of Poocham Hill Winery. As you settle in to watch the sun setting over the leafy ridges, you sip a glass and wonder where you are. Is this wine country? 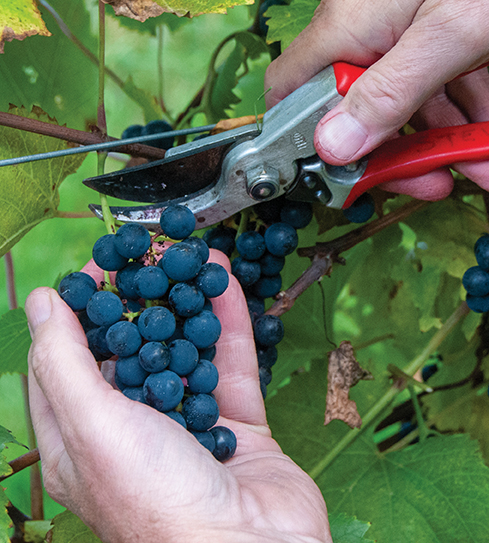 In 1639, the Saybrook Colony at the mouth of the Connecticut River used George Fenwick’s grape vine seal on its flag, and by 1665 the emblem had earned its place in the center of Connecticut’s state seal, standing for good luck, peace, and fertility. It also stood for the region’s most abundant fruit. And throughout the 1600s, English colonists across New England took the sweet fox grapes and pressed and fermented the juice into a bubbly sweetish wine, keeping barrels ready for weddings and funerals. Then, for about two centuries, little wine was made because apple cider was easier and cheaper, with abundant apple trees spreading across the hills and dales of the northeast. Expensive imports from Madeira and Portugal replaced homemade fare. 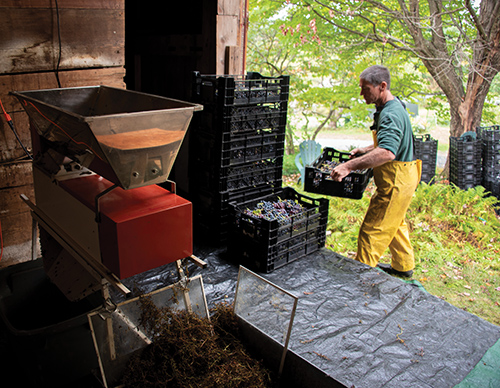 Still, by 1858, enough farmers were making wine in Connecticut to sponsor a convention of growers. Then at the turn of the 20th century two events changed the landscape of western New England. First, the apple trees died off, killed by tiny scale insects. Then, huge numbers of immigrants arrived from southern Europe who had no interest in making apple cider. They wanted to make wine. Vineyards sprang up around Hartford, Connecticut. One vineyard in Glastonbury, Connecticut, was started by an Italian banker named Pasquale D’Esopo, who used Concord grapes in a blend that he claimed resembled Chianti. But this commercial vineyard, and dozens of others like it up and down the valley, was wiped out by the failed experiment of Prohibition.

Today, the most popular Connecticut wineries are in the southeast near Long Island Sound and in the microclimates of the Litchfield Hills. But wineries exist in all the New England states, from the coastal regions to the high hills, from the tip of Cape Cod to the shores of Lake Champlain. The river valley has its fair share—two dozen from Priam Vineyard along the Salmon River watershed to Montview Vineyard in the Northeast Kingdom of Vermont. 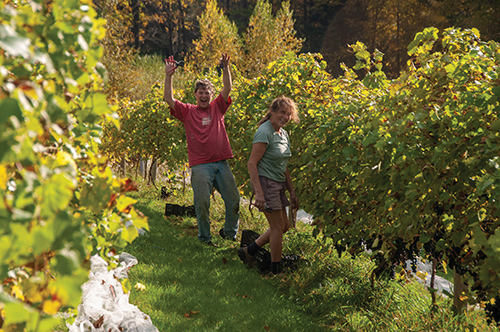 The rustic farmhouse of Crystal Ridge Winery is not too far from where D’Esopo’s vineyard in Glastonbury, Connecticut, thrived over a century ago. Founders MaryAnn and Harry James were inspired in 2004 by their son Butch, who asked his father, “What do you think about making wine?” Preparing the two-hundred-acre Belltown Hill Road property, they consulted with experts to choose varietals that stand up to New England’s seasons. The entire family worked hard to produce great wine, selling bottles to local restaurants and friends, and soon the 10,000 vines of a dozen varietals were certainly more than just a hobby. In January 2018, they opened the 2,400-square-foot log-cabin-style tasting room with its second-story balcony views of Hartford and the river valley.

Crystal Ridge’s winemakers take full advantage of microclimates and unique soil characteristics, as well as the vineyard’s southwest-facing hills. Their estate-grown grapes include chardonnay, vignoles, cabernet franc, and dornfelder, a hybrid originating in Germany with grapes of deep midnight. Their cabernet franc is balanced and beautiful with notes of berry and smoke. For whites, sauvignon blanc is crisp and bright, while the 2018 chardonnay is dry with light oak notes with hints of buttered toast.

As you travel north along the river, you will find unfamiliar names of grape varietals. Farmers have been creating hybrids of European and American grapes since at least 1800, some for eating, and some for making wine. They have been developed to work with particular terroirs and particular climates, with some working rocky, frost-scarred highlands and some in loamy, river-soaked soil. At Black Birch Vineyard in Hatfield, Massachusetts, couple Michelle Kersbergen and Ian Modestow have created a small, high-density vineyard that has produced five award-winning wines. Planting 19,000 vines of ten hardy varietals, they take a hands-on approach to crafting small batches, as well as taking advantage of regional sourcing to make their wines and cultivate their own vines. 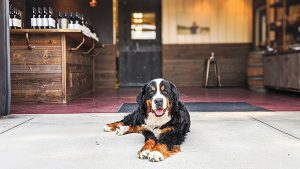 Like other growers, they cultivate grapes like traminette, an American hybrid, and cabernet franc, an old-world favorite, which are well-suited to the climates of the northeast. At the tasting room, you can sample cab franc sourced from Rhode Island, then sample cab franc sourced from Long Island. They believe their “responsibility as winemakers is to highlight, not manipulate the vineyard expression” and to support family farms and like-minded growers. Their port-style Ruby, made with marechal foch, is sweet and rich with dark berry notes and a caramel finish. There are rieslings in two styles: “Pendleton” is crisp and sweet, and “Clone 98” is “elegant” and “regal.” Rounding out their listing of whites are Traminette and 32° Ice Wine. “Small batches from difficult vintages or small batches from difficult varietals are hallmark of old-world vineyards,” explains winemaker Kersbergen. “The key is quality wine, not just wine.” 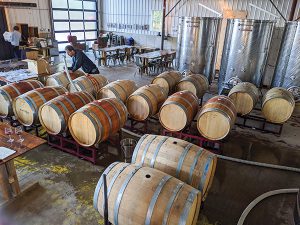 Most of New Hampshire’s two dozen wineries linger nearer the Atlantic coast, but a few cling to the western slopes of the mountains. Built on an 19th century sheep farm, Poocham Hill Winery in Westmoreland is a great example of how owners Steve Robbins and Mame O’Dette have adapted to their particular microclimate, with a soil of ancient clay and gravel. “We really lucked out when we bought the farm,” says Robbins. “Our vines were planted on what had been the edge of Lake Hitchcock.” This ancient glacial lake left nutrients in the soil, as did generations of farming.

The couple has been making wine since 1978—that seminal year in New England viticulture—and have been farming in Westmoreland since 1998, starting with marechal foch grapes. The winery opened in 2016, with 1,200 vines and a tasting room that looks like a maple sugar shack, located at the end of a bumpy country road. “The Connecticut River definitely affects our local climate. If you monitor the temperatures here, there is a 4–6-degree difference from the far side of the hill,” says Robbins. “In the fall, we don’t get frost because the river takes care of that.” Their philosophy is built on the idea of preserving local land and the agricultural traditions of the area. As Mame O’Dette shares: “That’s what agriculture is all about—neighbors helping neighbors.”

With “hand harvesting and attentive fermentation,” they are able to showcase the unique characteristics of grapes whose names might not be known to many tasters. You can try their full-bodied frontenac aged in American oak or sip Wolf Pine Red, a frontenac-noiret blend with pepper and black cherry notes. Other excellent reds include St. Croix, marquette, and marechal foch, which stands out with a medium body and rich ruby color. The white wines are equally interesting, again offering tasters the opportunity to try something new. La crescent and la crosse are two North American hybrids featured as the eponymous vintages. The 2016 La Crescent is dry, crisp, and fruity; the 2014 vintage of la crosse is full-bodied and off-dry. Rounding out their menu of whites is frontenac gris, the pink-skinned cultivar of the deep red frontenac. The 2016 vintage yields the amber-colored wine with a fresh fruit nose and balanced finish. “You don’t need so many varieties, just find what works,” says Robbins. “Our wine sells well.” 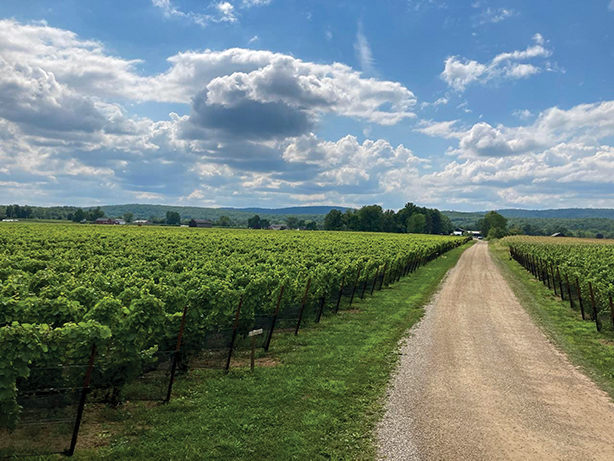 Vermont’s Connecticut River valley wineries use high-acidity grapes with even more unfamiliar names like marquette and l’acadie blanc, some developed at Cornell University and some at the University of Minnesota. The standout winery in the state, according to the New York Times and Wine Enthusiast, is La Garagista. Settled on the slopes of Mount Hunger in Barnard, Vermont, this small farm run by Deirdre Heekin focuses on “alpine wines” and is “guided by regenerative, permaculture, and biodynamic thought.” The winery’s first vintage arrived in 2010, and by 2015, Heekin and her team were getting the attention of wine critic Eric Asimov, who said that the wines there were “so soulful and delicious, they challenge crucial assumptions long taken for granted.” Those assumptions, promoted by the wine critics of the late 20th century, were that the only wines worth a critic’s—and thus the public’s—attention were ones from hot climates and grapes like cabernet sauvignon. That is an assumption that has been overturned in the last few decades through the honest efforts of winegrowers and winemakers in places like the Connecticut River valley.

Heekin believes that wine is made in the field rather than in the cellar and focuses much of her attention on the terroir and what it can bring to the grapes. “I just think of myself as someone who’s trying to hone a craft,” she told Middlebury Magazine, “following agricultural practices and doing work in the cellar to provide the best expression of place.” She has resisted calls to expand, preferring to increase quality rather than quantity, keeping production below 2,000 cases, although her wines are distributed as far away as Europe. 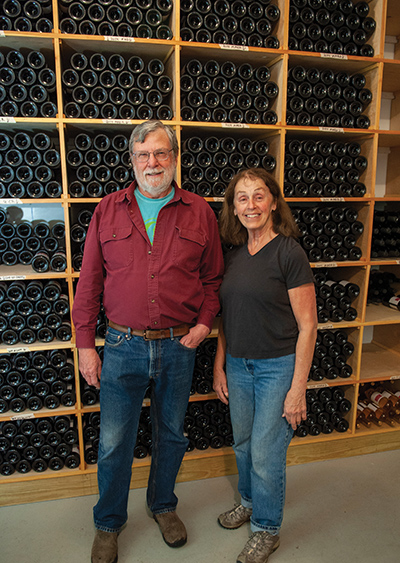 Their wine list is long and poetic, and the wine makers pay homage to cultures, styles, and techniques past and present. Their tasting menu includes 16 “Alpine” wines, made in both “Petillant Natural” (naturally sparkling) and “still” styles. With first fermentation in the bottle, wines like Ci Confonde White, Red, and Rose are unfiltered and effervescent. The 2019 Arlette Petillant Naturel Speciale features frontenac gris, a pale pink wine with fruit and mineral notes. Every aspect of the enterprise, from soil to glass, features attention to Vermont’s climate, culture, and history.

Supporting local vineyards as much as possible encourages the local economy and reduces our carbon footprint. But these are not the only reasons to buy the New England wine our neighbors cultivate and preserve. Local vineyards give us the chance to find our palettes and explore the unique character of the land. Wine has always been a celebration. So, visit a Connecticut River valley winery and celebrate the taste of home.

Eric Lehman and Amy Nawrocki sampled hundreds of local wines as part of their research for their book A History of Connecticut Wine: A Vineyard in Your Backyard published by History Press.