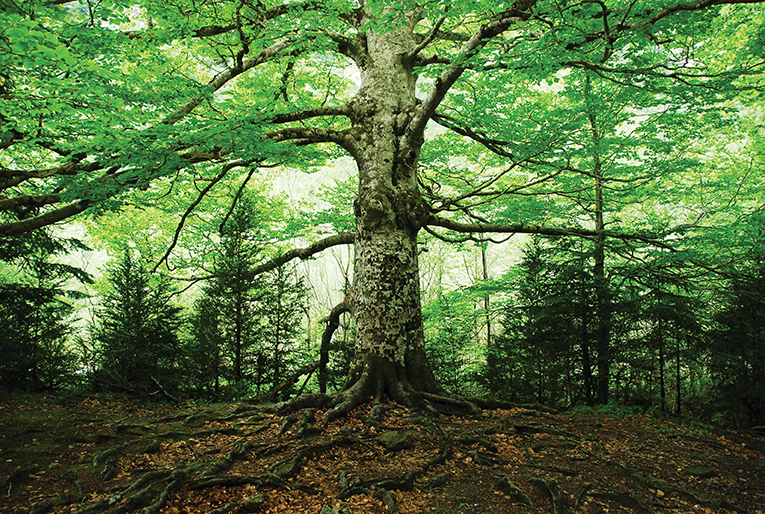 Mother Trees
Mycorrhizae, from the Greek words for fungus and root, connects the trees of the forest together facilitating the sharing of nutrients and information.
By Renee Durant

Happy families are all alike; each unhappy family is unhappy in its own way,” began Tolstoy in his novel Anna Karenina. Take a walk in the woods and you will see trees of different sizes and species reaching up towards the sunlight. One would think that there is a fierce competition between the trees to get to the top of the canopy. But in the dappled sunlight of the understory, one does not have to be the biggest nor the tallest tree to survive and thrive. What you are seeing is one big happy family.

Trees live in cooperation with one another, sharing their resources and protecting each other, much like a family would. At the center of this happy family are the mother trees. Mother trees are the biggest and oldest trees in the forest. They are at the center of a complicated communications network between all trees. They can be linked to hundreds of other trees in a forest. Mother trees make far more sugar than they need for self-sustentation.

Like any good mother, mother trees send their excess carbon, water, and other nutrients to the seedlings giving them four times the chances of survival. Mother trees not only impart nutrients to those in their charge but can also communicate with other species of trees, warn of impending danger, and at the end of its life, will impart wisdom to the trees in its charge. Mother trees make a stand stronger and more resilient.

Dr. Suzanne Simard, a Forest and Conservation Sciences professor at the University of British Columbia, coined the phrase “mother trees” during her research on forest cooperation. Tracking the carbon-14 isotope in carbon dioxide, she found that there was two-way communication between trees. Her research uncovered that these older hub trees nurture the younger trees in the understory through a source-sink gradient. She found communication was facilitated by the underground mycorrhizal network in the mixed forests of birch (Betula) and Douglas fir (Psuedotsuga menziesii).

The mycorrhizal network refers to the fungi that interact with and between tree roots. In this symbiotic relationship, the fungi get sugar and send phosphorus, nitrogen, and water to trees. The fungi use little of the carbon they receive from the trees, so they pass the remaining carbon on to the other trees in the network. Interspecies communication is shared by those that use the same mycorrhizal network. By this means, over one hundred different species of trees can communicate with one another.

Interspecies tree communication, like that between birch and Douglas fir in Dr. Simard’s research, increases fitness and tree resiliency to environmental stressors like predators, toxins, and pathogens; trees do this by sending chemical signals through the mycorrhizal network to warn their neighbors. Surrounding trees can defend themselves by releasing hormones or chemicals to deter predators or pathogenic insects. Birch trees release antibiotics into the ground to help Douglas fir trees battle infections. The lack of diversity in a forest eliminates important interspecies relationships and leaves a stand vulnerable to stressors. Dr. Simard found that single species forests do not fare as well as diverse forests because an entire stand can succumb to the same disease.

Good stewardship of diverse tree stands along estuaries contribute to retention of banks, which keeps the water clear and provides shade and habitat for fish and other wildlife. In a complex adaptive system, a racoon that lives in a tree stand along an estuary eats its fish, leaving remnants to seep into the ground. The nitrogen is later picked up by the trees via the mycorrhizal network.

Diversity of tree species strengthen the resiliency of a stand as is exhibited by Dr. Simard’s Douglas fir pumping nutrients to birch trees after its leaves have shed. This cooperation is reciprocated by the birch, which when in full leaf and creating shade over the Douglas fir, sends nutrients to the Douglas fir. The retention of mother trees is good stewardship. They are not only nurturers, but the loss of too many mother trees in a stand can cut communication, and thus resiliency. Foresters may be inclined to cut down the biggest and the tallest trees in a forest, but in doing so, they may be removing a repository of good genes.

When a mother tree is injured or diseased, it sends out stress chemicals and dumps its carbon store to trees in its mycorrhizal network; this signal causes the lower trees in the understory to ramp up the genes to produce defense chemicals. These ramped up genes are passed on to their progeny, thereby strengthening their offspring. Thus, the mother tree’s “wisdom” is conveyed as wisdom to succeeding generations.

Renee Durant grew up in Old Lyme, Connecticut, holds a degree in Biomedical Science, and has had a lifelong love of and curiosity for all of nature, instilled in her by her mother.