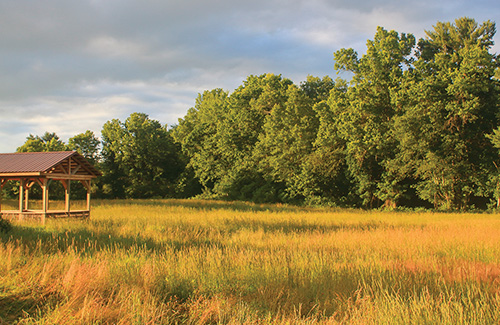 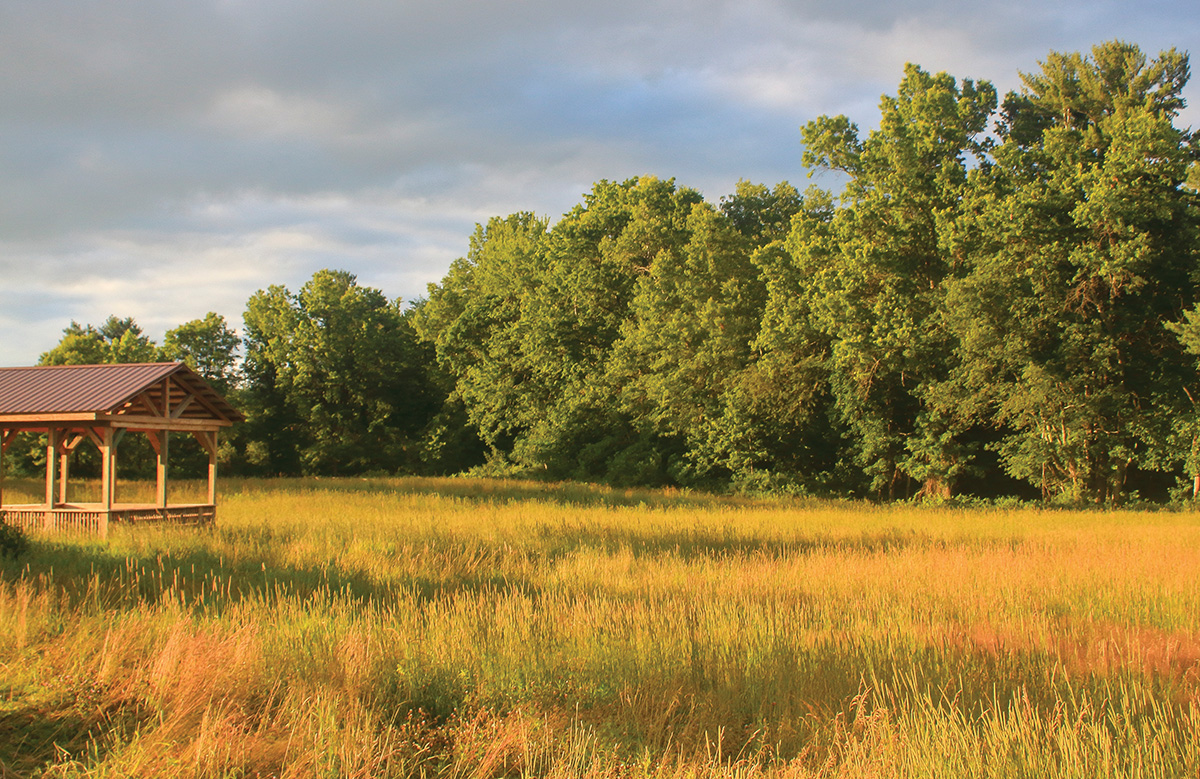 As the Fort River approaches its confluence with the Connecticut River in Hadley, Massachusetts, it meanders through a landscape of prime wildlife habitats and pastoral scenery characteristic of the Pioneer Valley. Grassland birds, hawks, owls, waterfowl, wading birds, and migratory songbirds all benefit from this ecologically significant area. 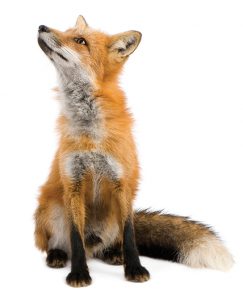 The Fort River Birding and Nature Trail is a well-engineered, universally accessible trail that opened in 2014. It allows visitors of all abilities and ages to experience the diverse habitats and wildlife. The trail is located in the 260-acre Fort River Division of the Silvio O. Conte National Fish and Wildlife Refuge, named for the late Massachusetts congressman and environmentalist who spearheaded its creation. The refuge, comprised of 18 properties, protects nearly 40,000 acres in the four-state Connecticut River watershed. 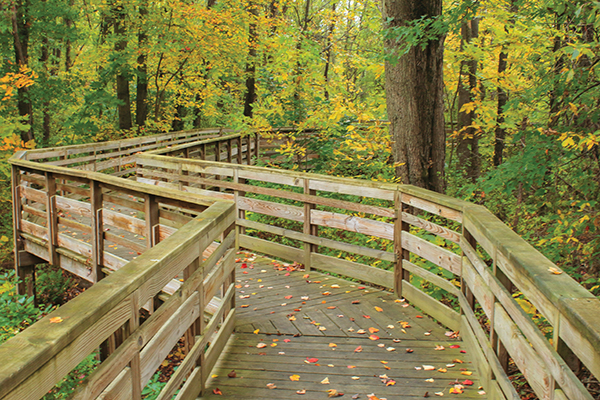 The winding path leads visitors through a progression of habitats, starting at the trailhead where wildflower meadows and the pollinator garden provide sustenance for ruby-throated hummingbirds, butterflies, bees, and other insects.

The refuge hosts one of the region’s largest known colonies of barn swallows, many of which nest in a building near the entrance. Refuge staff retrofitted the structure to create an ideal nesting habitat following the demolition in 2020 of an old horse stable, where approximately 40 pairs had nested in the past. American woodcock make evening courtship flights in the fields during spring, and eastern cottontail rabbits and other small mammals use brushy growths for cover from predators such as red foxes.

Along the banks of the Fort River, the Connecticut River’s largest undammed tributary in Massachusetts, you may see muskrats foraging on the riverbanks or wood ducks around nesting boxes. Boardwalks and observation areas provide several perspectives of the floodplain, where water levels fluctuate seasonally. Vernal pools serve as crucial breeding areas for wood frogs, spring peepers, and salamanders. Rose-breasted grosbeaks and other colorful migratory songbirds nest in forest groves and shrubby thickets during spring and summer, and barred owls are often seen staking out prey.

Another large meadow at the east end of the loop offers views of the Holyoke Range, a prominent landmark of the Pioneer Valley. Bobolinks, distinguished by their melodic warbling song, eastern bluebirds, and tree swallows are among the species that benefit from the grassland, a habitat which is becoming increasingly rare in the Northeast because of development and regrowth. A nearby seasonal wetland offers opportunities to see painted and snapping turtles, raccoon, green herons, and other wading birds.

The Fort River Birding and Nature Trail is open year-round dawn to dusk. Portable restrooms are available at the trailhead, and leashed dogs are allowed. From Interstate 91 in Northampton, follow Route 9 across the Coolidge Bridge, then bear right and follow Old Bay Road (which merges with Bay Road) 1.2 miles to the junction with Route 47. After another 0.6 miles, turn left on Bay Road, then turn left on Moody Bridge Road and continue to the refuge entrance.

Nearby Places to Explore

Other places to go exploring and birding near the refuge include the Alexandra Dawson Conservation Area on North Lane off Route 47 in Hadley, where a scenic trail traverses a dike on the banks of the Connecticut River. Rare and uncommon birds (including short-eared owls and a gyrfalcon which attracted visitors from around the country in 2013) are often seen in the adjacent agricultural fields, known as the “Honeypot.” The Norwottock Rail Trail, a paved recreational trail that runs from Northampton to Belchertown along the former Massachusetts Central Railroad line, features a 1,500-foot-long historical railroad bridge over the Connecticut River and views of fields and wetlands. The main trailhead is at the junction of Damon Road and Route 9 at the Coolidge Bridge. 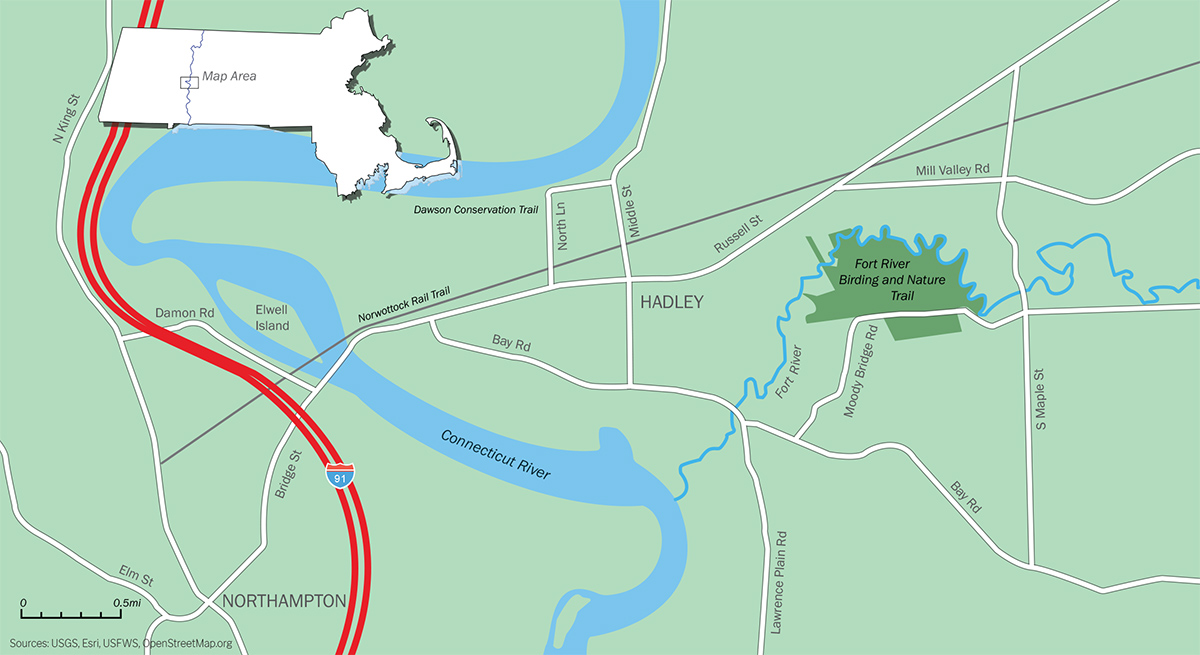