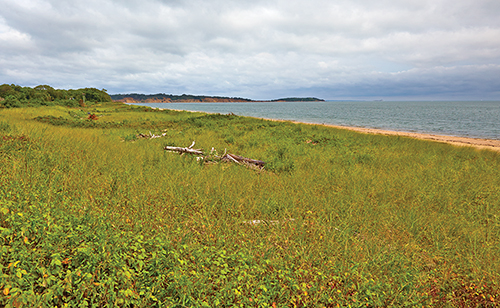 A Once and Future Sanctuary 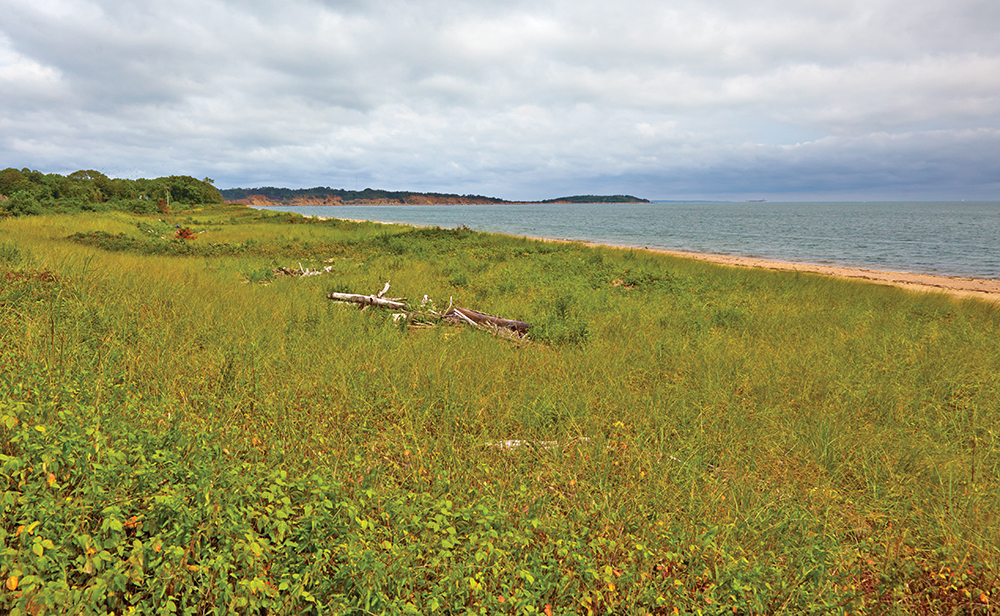 The current natural state of the southeastern shoreline of Plum Island. Photo courtesy of Robert Lorenz.

In summertime, looking across the Sound, my thoughts turn to Plum Island, New York. I believe this island could be designated a public park and nature sanctuary into perpetuity if accompanied by various restoration imperatives.

Eight miles south of the Connecticut River estuary across Long Island Sound, this island rampart of glacial moraine was established under the Department of Agriculture in 1954. It has served reliably as home to the Plum Island Animal Disease Center (PIADC). In 2002, control of the facility was transferred to the Department of Homeland Security Directorate for Science and Technology.

For me, a Cornell University PhD student in the 1970s, it was a blank spot on my map of post-DDT breeding ospreys between NYC and Boston. Fortuitously, because of my researcher status and PIADC’s interest in toxic environmental contaminants, I gained annual access to Plum for two seasonal osprey surveys: the first was in spring for an active nest count (typically about eight), the second around the summer solstice to determine the count of fledglings from those nests. In the early years of my work, I color-banded them for my long-term population study. This meant using the island’s “cherry picker” to access high nests on power lines.

I took lunch breaks with the scientists. They were as curious about my research as I was impressed with the integrity of their farm animal disease studies—which perform an essential function for the security of the American homeland. Plum Island Lab Director Dr. Jerry Callis, a Georgia native and gracious and courtly gentleman, always gave me a warm welcome. He became the founding director of the Plum Island lab in 1954, at age 28, and served with distinction for 25 years. In addition to guiding the USDA research program, he was a devoted steward of the island’s ecology.

Plum has been a Federal holding since 1899, shortly after the Spanish-American War. It had first been fortified in 1897 as Fort Terry, a strategic defense site next to mile-wide Plum Gut, one of the two major channels through the Harbor Hill Moraine that give big ships (and now submarines) access to New London and New York City via Long Island Sound.

Currently, Plum Gut and the surrounding waters east to Fishers Island are famous for sport fishing for striped bass and bluefish. This food chain is now shared with abundant harbor and some gray seals, many of which haul out on the rocky shoals south of Plum Island’s extensive beach shores. The lab is still operating with blue-and-white trawlers running daily from Old Saybrook, Connecticut, and Orient Point, New York, ferrying researchers and supplies to the island.

Plum had its day of celebrated Natural History, and some of that natural bounty could be restored should it become a public park. Prior to Federal acquisition, it was held by the Jerome family for about 40 years. The Jeromes were mad about ospreys! The classic account of over two hundred osprey nests on Plum by Charles Slover Allen was published in The Auk in 1892. This lengthy and literate account of “Breeding habits of the Fish Hawk on Plum Island, NY” is good reading for osprey fans. Approaching Plum from Gardiners Bay, but still miles away, Allen describes the growing abundance of flying ospreys. The island had no mammalian predators, allowing countless low or ground osprey nests, second only to neighboring Gardiner’s Island. The Gardiners were also proud of their grand osprey colony (and they still are, in the 21st Century).

During my 1970s visits, the island was free of mammalian predators and deer (these were shot when they swam over), appropriate for its disease research mission. There was a big freshwater marsh and swamp, with diverse wetland vegetation. Old beach ridges ran through it, supporting low trees, black gum and oak, which in turn supported osprey nests. There was a heronry of several elegant species, clustered in dense vegetation below an osprey nest. These egrets and ibis commuted to feed in the rich salt marshes behind Orient’s Long Beach State Park, and possibly the much more distant Connecticut River estuary. Restoration of these habitats seems possible.

The southwestern “forest, marsh, swamp, and sandy meadow” portion of Plum probably accreted as glacial outwash and has seen further deposits since the glaciers. Beyond the swamp, next to the sea, was a sandy meadow of perhaps fifty acres. In the warm season, it housed a raucous gullery, crammed with the nests of Herring and Black-backed Gulls. In retrospect, their copious guano may have kept this land in beach plants: since their abandonment, roughly in 1994, some of it has reverted to a woody shrub meadow of classic species such as Bayberry…and perhaps Beach Plum…a wild seasonal food for which the practical early settlers named the island.

Plum Island’s post-glacial existence, thousands of years free of mammalian predators, led to some remarkable local ecology. At least four species of turtles inhabited the swamp including painted, spotted, musk, and snapping. On my June visits, gravid females were leaving the swamp on warm days to lay their eggs in surrounding sandy soils, free of raccoons, the usual egg predators. But I witnessed the gulls moving into this predatory “niche.” They would seize the turtles on open ground, fly upwards, and then drop them on the hard asphalt road that partially bordered the swamp, in order to feast on the contents.

This “Wildlife Pastoral” ended with the accidental introduction of raccoons in about 1994—possibly in supposedly empty dumpsters ferried back to Plum. These predators eliminated the gullery and the heronry. In the near future, one substantial restoration challenge would be to eliminate the raccoons so that low-nesting birds and turtles could return to their Eden-like abundance. Gulls could be prevented from reestablishment by removing their eggs. This would be a constant spring exercise as it would be important to act early as they are an intensely social species (and very abundant elsewhere). Similarly, a “fragrant” cormorant colony should be discouraged, which would otherwise “guanify” the lovely swamp and destroy extensive vegetation.

With sophisticated approaches and considerable work, Plum could be restored as a Wild Seaside Garden for people and nature, a compelling maritime destination at the entrance to Long Island Sound.

Plum Island
Chronology of Developments
In 2003, the Department of Homeland Security assumed control of Plum Island as one of the changes following the September 11 attacks. The DHS continues to operate the research facility in conjunction with the US Department of Agriculture.

The DHS announced in 2005 that they would remove the facility from Plum Island. Manhattan, Kansas, was selected as the home of the new National Bio and Agro-Defense Facility. In 2008, Congress passed the Consolidated Security, Disaster Assistance, and Continuing Appropriation Act, which required the sale of Plum Island.

The General Services Administration oversees the disposal of real estate no longer needed by the federal government. However, the 2008 act changed the rules for the sale of Plum Island, which raised the possibility of sale of the island to private investors for development.

Several conservation and environmental groups began a movement to protect the island. They petitioned for the island to be protected from private sale and development and, instead, be held in public trust as open space and protected wildlife habitat. Despite the pleas for preservation, on August 29, 2013, the USDA and DHS announced that they would continue attempts sell the island privately.

Representatives and senators from New York, Connecticut, and Rhode Island renewed their efforts to change the law requiring the sale of Plum Island in 2015.

Recently, included in the Consolidated Appropriations Act, 2021, was language repealing the section of the 2008 act to sell the island. Congress passed the bill in December 2020, and it was signed by the president. Now, the DHS must dispose of the island in accordance with GSA practices for disposing of federal real estate. This provides for transfer to another federal agency, a state, a municipal government, or a non-governmental entity for other public use. A public sale would only happen if all the aforementioned entities do not wish to acquire the property.

The National Bio and Agro-Defense Facility is expected to open in 2022. All operations on Plum Island are to be transferred to the new facility by 2023.