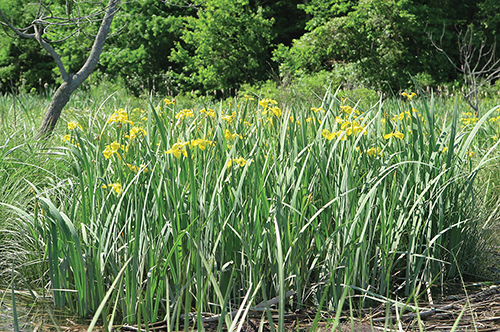 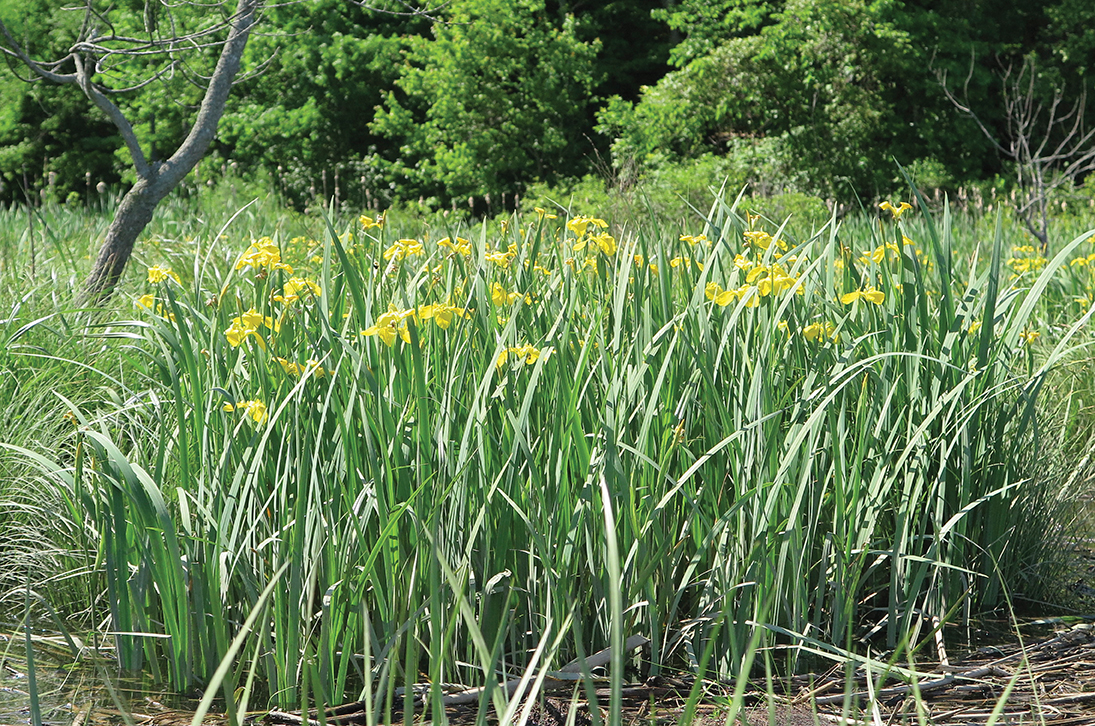 A Beauty and A Beast

How could something this beautiful be bad?

Pale yellow iris (Iris pseudacorus) has a lot going for it: attractive flowers, it is associated with a familiar and beloved garden flower, and it is virtually pest free. This plant’s good looks have ensured its export through time from its native origins in Europe, Asia, and North Africa to water gardens and wetlands all over the world, places from which it has also readily escaped. In the estuary, and beyond, yellow iris has gradually, and then with alarming speed, appeared in our tidal wetlands where it outcompetes the native vegetation and, notably, our native blue flag iris (Iris versicolor).

We’re becoming all too familiar with the characteristics of successful plant invaders: freed from native pests and other maladies in their home ranges, these plants are unencumbered to become established and, thrive, with little competition. And, as we have seen before, these plants also have effective survival and dispersal strategies. 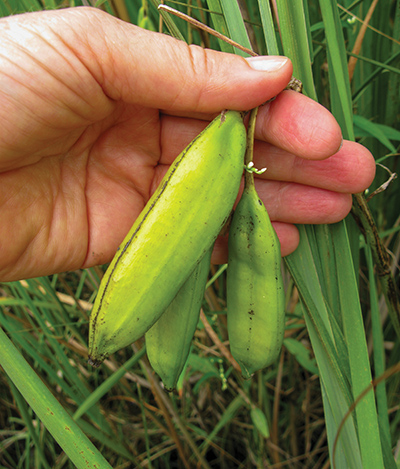 Yellow iris, for example, have robust spreading roots in the form of rhizomes that adventitiously send out lateral shoots; every ten years or so, these rhizomes fragment to establish new plants that are free to be dispersed by currents or tidal flow. These roots form impenetrable mats that can even form floating shelves that have been known to impact fish habitat, interfere with shoreline use by both people and wildlife, and decrease the width of streams. It also makes use of seeds that mature in, on average, five or six robust seed pods, each containing up to 50 viable seeds. The seeds are buoyant and have been shown to remain viable for at least seven months, allowing them to be dispersed widely. Oh, and because they are loaded with glycosides, the entire plant, including the seeds, is toxic to humans and animals—another reason why they succeed where other plants are subject to browse pressure, especially from deer.

Although yellow iris prefers and is most associated with wetlands, it is remarkably tolerant of drought; one appeared in my garden—perhaps a fragment of rhizome that came in with a new plant, and quickly grew, flowered, and spread.

And just when you thought at least salt water would knock it back, this plant has demonstrated salt tolerance, making it capable of establishing in fresh, brackish, and saltwater tidal habitats. About the only thing that yellow iris can’t tolerate is deep shade, which unfortunately is not a limiting factor in the many tidal wetlands where we find it in the Connecticut River estuary.

Beyond its capacity to endure—the trait shared by most of our toughest invasive plant species—scientists are increasingly noting a greater threat: the ability of plants such as yellow iris to fundamentally change the places they occupy over time; they can become ecosystem engineers. In this case, not only do large clumps of yellow iris displace native plant and animal diversity, but by changing the site conditions, they alter how the local landscape progresses. Impenetrable mats of rhizomes, for example, can prevent the establishment of other plants; the tangled roots eventually compact the soil and change the elevation, which in turn creates a drier site that continues to trap sediments, perpetuating the change. This phenomenon has been observed along the Potomac River in Washington, DC, where marshes have converted into moist forest where ash trees replace willow, an historic component of that marsh area. Ash trees in and of themselves are not less desirable, but willow is a key wildlife plant, providing important browse and cover, shading for fish, and is also useful to beaver. Young ash may support some of these needs, but a mature ash forest has much less value overall to wildlife.

In and of itself, you might argue that nature is all about change, but along with these altered successional trajectories comes the loss of important food sources for wildlife that have coevolved with and come to rely on this local vegetation. Arrow-arum (Peltandra virginica) and arrowhead (Sagittaria latifolia), two plants that occur in our estuary coves, provide fruits that are important to waterfowl and muskrats; arrow-arum is the preferred food of the wood duck, for example, which relies on this source of energy during migration. Both native plants occupy similar niches where yellow iris has been known to invade.

For these reasons, yellow iris is considered to be a noxious weed and is regulated in Connecticut, Massachusetts, Vermont, and New Hampshire as well as the northwest states of Washington, Montana, and Oregon. It occurs in almost every state except the desert southwest and up through the Dakotas. 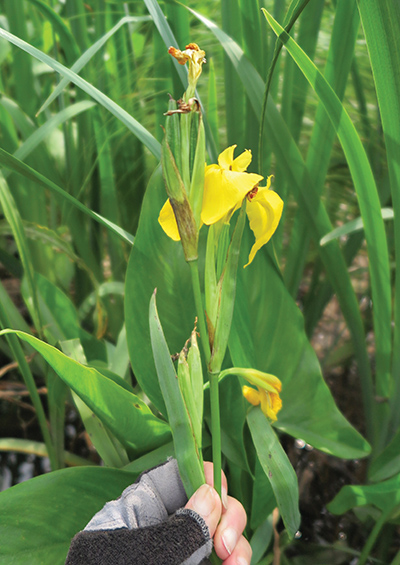 And control of this species is tricky, mostly because it’s challenging to isolate any one plant—especially in a diverse wetland, without damaging another or creating the type of disturbance that favors the very plants you’re trying to get rid of. Early detection and removal or control is the mantra of all those who deal seriously with invasive species, but it’s not always possible. To avoid the complexities of herbicide use and the potential for side effects to other species, it is possible to successively mow where feasible. Herbicide may be effectively used during the growing season, applied to cut stems or foliage where the poison will be transferred to the rhizomes, although this is time- and labor-intensive work. While digging is possible, it is complicated by wetland conditions that include saturated muck soils, and the fact that the sap of this plant can cause skin irritation, requiring gloves and protective clothing.

Although there is reference in the literature to borers, slugs, and black vine weevils, as well as several invertebrates and fungi that feed on this plant, there are, as yet, no known effective biological controls.

The volunteers of Friends of Whalebone Cove in the town of Lyme, Connecticut, have begun cutting and removing the flowers of yellow iris that appear in May and June in an effort to at least prevent the development of seed pods; not an answer but a means to believe that something can be done. As the late poet and civil rights activist, Maya Angelou, has suggested, “Do the best you can until you know better. Then when you know better, do better.”

In the meantime, spreading the word goes a long way toward preventing the further intentional spread of this beautiful, albeit beastly plant. Although yellow iris may be tempting to plant in your garden for that showy yellow flower and near perfect greenery, native plant alternatives such as the smaller dwarf crested iris (Iris cristata) and the blue flag iris (Iris versicolor)—both of which have coevolved with their native plant neighbors—provide essential resources to native wildlife including our local insect pollinators, a number of which are rapidly declining.