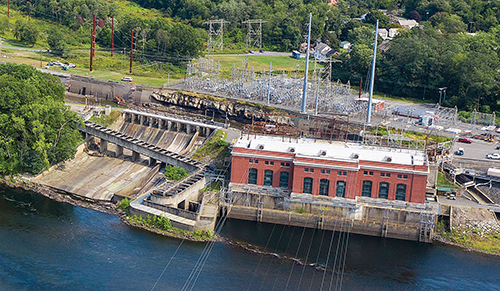 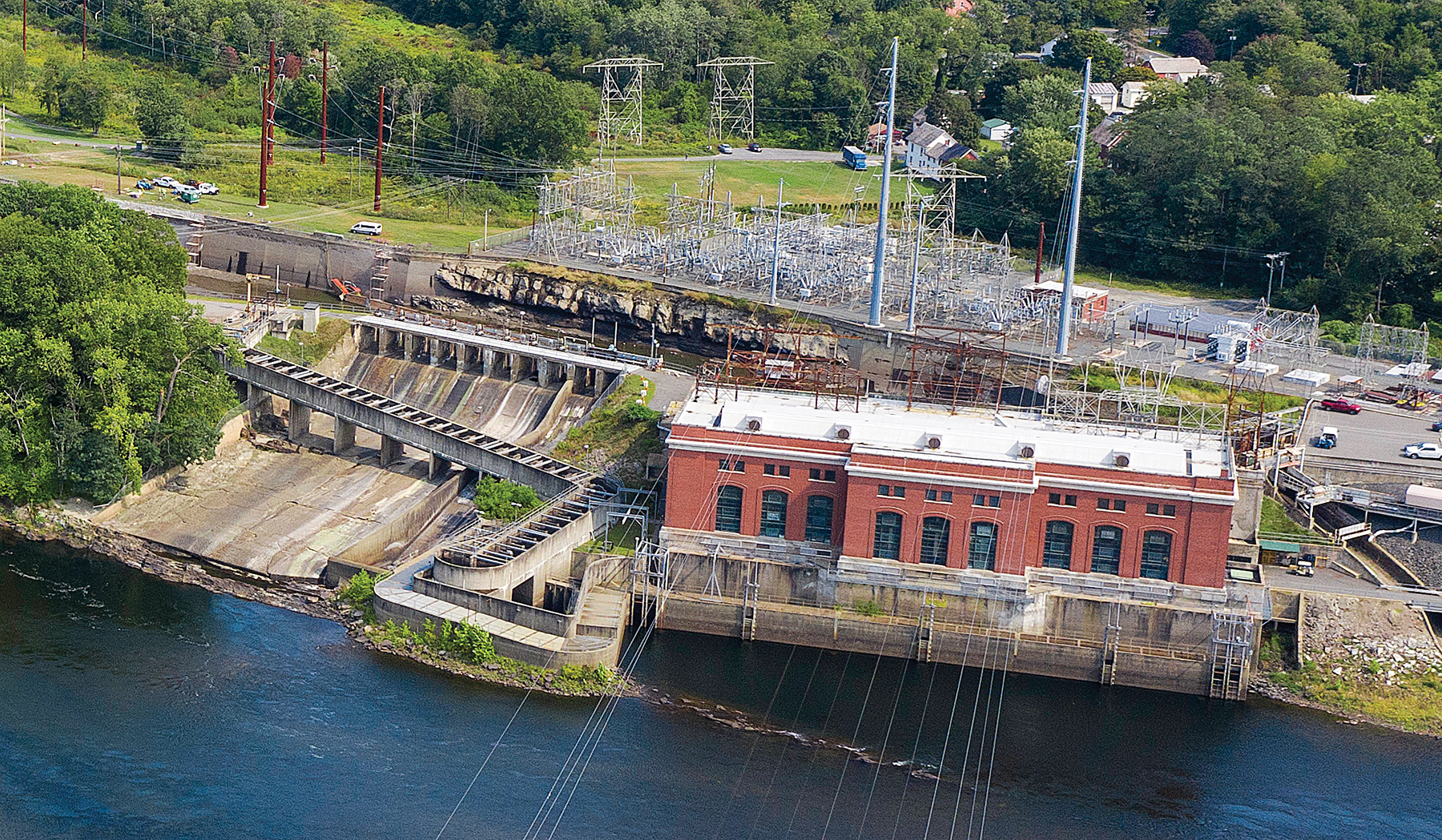 The fishway bypass from the Connecticut River bridges the spillway and enters the power canal next to the Cabot Power Station in Montague, Massachusetts.

Up and Over,
Clearing Obstacles to Reach Habitat

By Steve Gephard and Sally Harold
Photos by Christopher Zajac

Historically, each spring throngs of migratory fish from the ocean surged up the Connecticut River and its tributaries as far inland as they were able. How far upstream the fish were able to migrate depended upon the species and their swimming abilities and natural features such as waterfalls, gorges, and rapids. Rainbow Smelt were stopped by the first rapids of any significance while American Shad raced over those but were stopped by any barrier greater than three feet. Shad don’t jump. Atlantic Salmon, known for their leaping abilities, were able to surmount falls up to 12 feet high and muscle up the heaviest of rapids including Bellows Falls, one of the most powerful gorges in the eastern US. Smelt migrated as far as present-day Windsor Locks, CT; shad as far as Bellows Falls, VT; and salmon as far as Beechers Falls (Pittsburg, VT). These and other species penetrated upstream on tributaries until they encountered similar natural barriers. On some streams, like the Farmington (CT) and White (VT), they were able to “run” right up to the headwaters, dozens of miles from the river’s mouth. On other streams, such as the Cold (Drewville Gorge, NH) and Whetstone Brook (Brattleboro, VT), there are waterfalls very close to the mouth of the river that blocked entry to all species.

European settlers impacted these migrations soon after their arrival. First, they dammed the smaller streams for gristmills, sawmills, and ice ponds. Then they dammed the larger tributaries like the Salmon (CT), Chicopee (MA), West (VT), and Ashuelot (NH) for larger mills that manufactured goods using mechanical hydropower. Finally, they dammed the mainstem Connecticut River for planned industrial towns like Holyoke and eventually for hydroelectrical generation. When the first mainstem dam went up in Montague, MA, in 1798, it was the engineering marvel of the world—and it blocked access to the last of the spawning habitat for Atlantic Salmon, extirpating that species from the watershed. All other species could still spawn in downstream habitat. The lowermost dam on the River was the Enfield Dam (Windsor Locks, CT), and some species were able to get over it at some flows. Regardless, there was still some downstream spawning habitat for shad, river herring, lamprey, and sturgeons, so those species persisted, albeit in dramatically lower numbers. 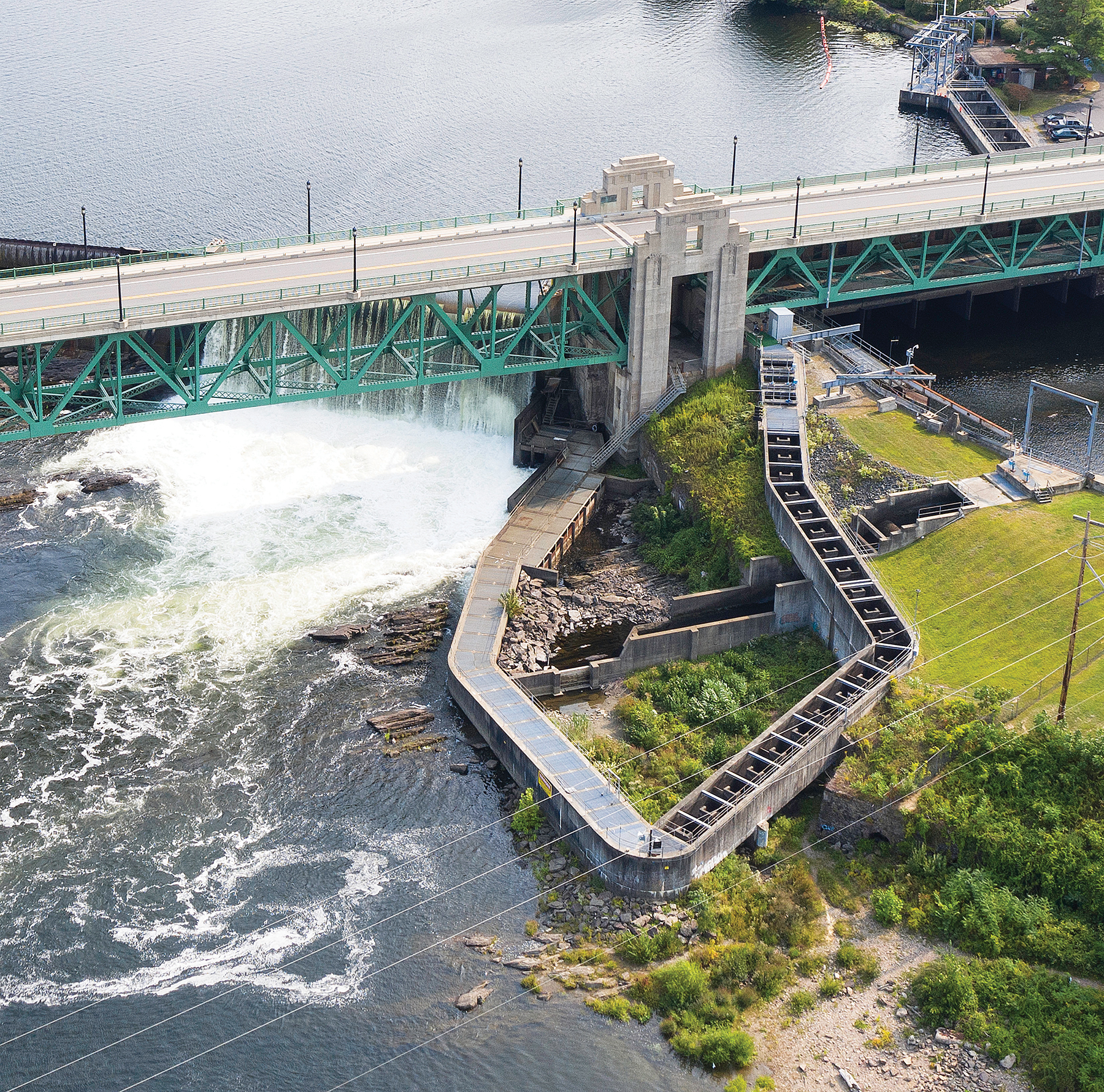 The fishway on the Connecticut River at Turners Falls in Massachusetts.

Thanks to fishway construction, fish are now able to migrate upstream of these dams. You may be more familiar with the term “fish ladder,” which originated in Europe and the West Coast of the US where salmon leaped from artificial pool to pool. Shad and some other East Coast species do not leap, so a variety of different fish passage designs have been developed, including elevators, and therefore use the generic term “fishway.”

All of the dams on the mainstem river produce hydroelectricity and therefore are licensed by the Federal Energy Regulatory Commission (FERC). FERC’s regulations allow the state and federal natural resource agencies to recommend (“prescribe”) fish passage facilities as a condition of a license when they deem them necessary. All four Connecticut River states, the US Fish & Wildlife Service, and the National Marine Fisheries Service joined forces to create the Connecticut River Atlantic Salmon Commission (CRASC), the mission of which is to restore runs of migratory fish back to their historical habitat within the watershed. To succeed, providing fish passage at these dams is critically important. The FERC licenses for the lowermost five hydroelectrical dams include conditions that required upstream and downstream fish passage. Due to the very tall Commerford and Moore dams upstream, fisheries managers decided not to pursue fish restoration beyond these five dams.

When the Enfield Dam (CT) washed out in the 1970s, fish gained access to the mouths of all Connecticut tributaries and the Westfield River (MA), which enter below the next dam, the Holyoke Dam (MA). This 30-foot-high dam is 86 miles upstream of the river mouth and included a rudimentary fishlift as early as 1952. Since then, the fish passage facilities have been expanded and modernized several times. They are now owned and operated by Holyoke Gas and Electric. There are two fishlilfts, one that is located at the top of the tailrace near where the water exits the turbines and the other on the other side of the powerhouse at the base of the dam. These lifts are elevators for fish that are operated by computers and technicians. Motorized gates crowd fish into a confined area under which a large bucket (“hopper”) rises, capturing them with hundreds of gallons of water and lifting them to just above the water level behind the dam. At the top, the hopper discharges its cargo so the fish can continue to swim upstream. Early in the season, these lifts may accumulate fish most of the day and operate only once or twice a day. During the peak of the migratory season (late May to early June), the lifts operate continuously. In 2020, over 360,000 American Shad, 760 Blueback Herring, 33,000 Sea Lamprey, 440 Striped Bass, and 18 federally-endangered Shortnose Sturgeon, as well as many other species, were carried above the dam in the lifts. (Note that not a single Salmon was spotted).

The Holyoke Dam has a fantastic visitor’s center. After the fish are discharged from the hopper, they swim past two windows. Behind one window is the nerve center of the operations where staff operate gates, lights, computers, and cameras from April through July and sporadically throughout the summer. This is where fish biologists identify and count the fish. The other is a public viewing window where visitors can stand in an exhibit-filled room, reading about the facility and the species they may spot swimming past the window. It’s like going to an aquarium, except there are no walls for the fish. They are wild, actively migrating, and moving upstream. COVID restrictions caused the facility to be closed to the public in 2020. To get information regarding visitation in 2021, search “Robert E. Barrett Fishlift” on the internet.

Upstream of the Holyoke dam is the 30-foot-high Turners Falls Dam (MA) (river mile 123), that sends water down a two-mile-long canal to a hydroelectric powerhouse operated by First Light Power. Three fishways are associated with this dam: one at the powerhouse, one at the spillway, and one just upstream at the gatehouse that allows fish from the other two fishways to leave the canal and enter the upper river. There is a public viewing window at the gatehouse ladder, but it, too, will likely be closed to the public this season. The fishways at this dam, built in 1980, used a West Coast design developed to pass salmon (more like the old “ladder” design) and have not performed well, especially for shad passage. First Light Power is in the process of renewing its FERC license, and the government agencies are seeking new and improved fish passage as a condition of the new license.

Next is the 30-foot-high Vernon Dam (VT/NH) at river mile 142, owned by TransCanada Hydro. Here there is a fishway with a public viewing gallery just downstream of Brattleboro (VT). The fourth dam in this series is the Bellows Falls (VT/NH) dam at river mile 174, also owned and operated by TransCanada Hydro. This was an important Native American fishing site because enormous numbers of fish congregated below the falls. Some fish could get upstream over the falls, but when the dam was built atop the falls, it blocked the migrations of all species. In 1984, a 57-foot-high fishway was built to allow Atlantic Salmon and Sea Lamprey to pass as they had historically. Shad never got above the falls, but with the fishway in place, some shad now go farther upstream. A total of 39 ascended in 2020. This site also has an excellent visitor center within walking distance from the center of the village. The final mainstem fishway is located at the Wilder Dam (VT/NH) (river mile 217) just south of Hanover, NH. It is also owned by TransCanada Hydro and was built to allow salmon access to the Ammonoosuc River and the White Mountains. Since the cessation of the Connecticut River salmon restoration efforts, this fishway has not been operated. Nevertheless, with all of the downstream fishways operating, migratory fish have annually ventured throughout the watershed, as far as 240 miles upstream of Long Island. The many partners, biologists, engineers, and conservationists who have teamed together to design, build, and operate these fishways to allow fish to reach historical habitat have made great contributions to the discipline of fish passage worldwide. Fishways have been critical in supporting fish restoration to the Connecticut River, but a better strategy, when possible, is dam removal. We will talk about that approach in a future column. 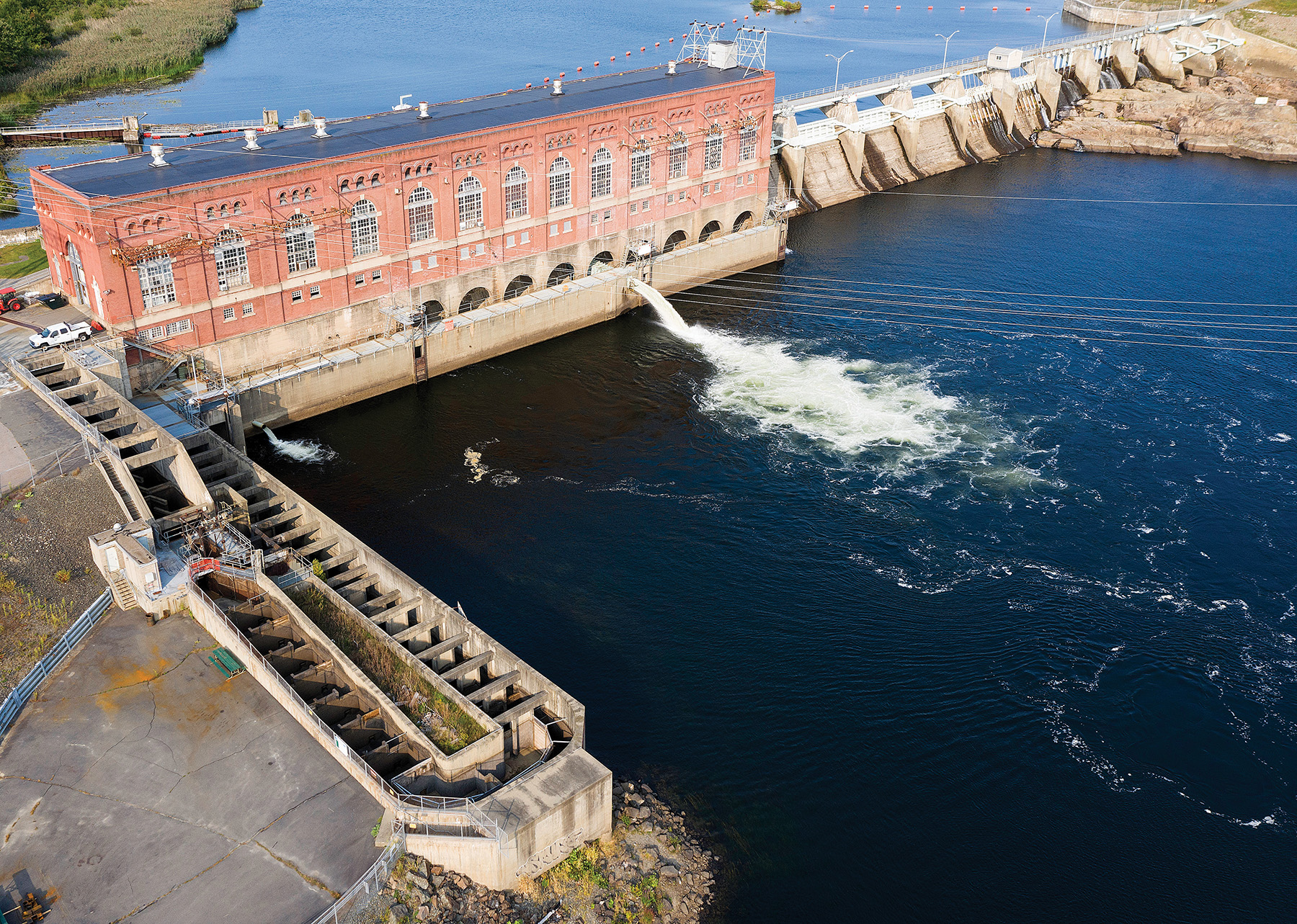 The fishway bypass around Vernon Dam on the Connecticut River in Vermont.