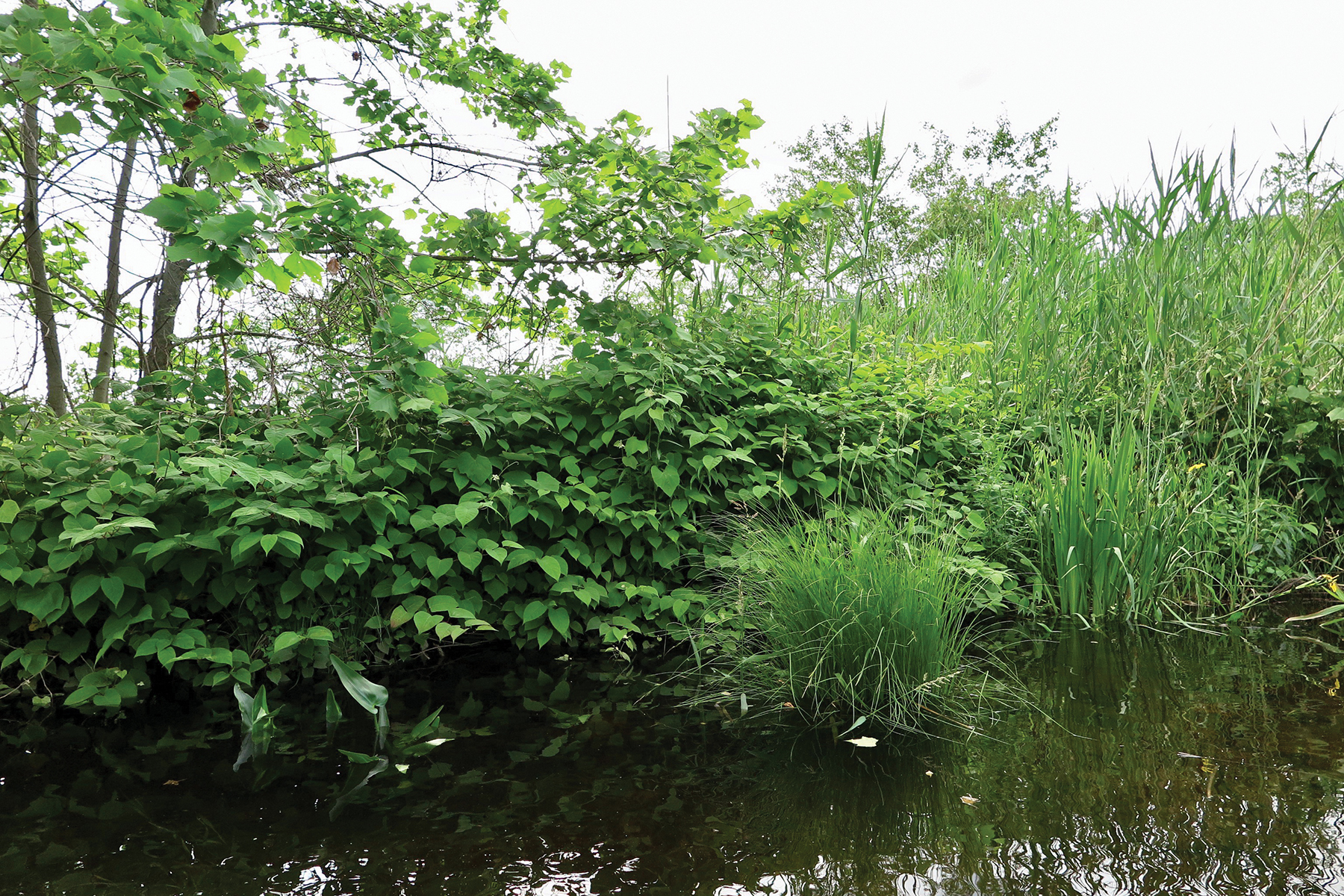 This is a problematic plant in wetlands and floodplains (riparian areas), where it competes with native plant species and is difficult to control without damaging sensitive areas.

The Perils of
Japanese Knotweed
Text and Photos by Judy Preston

It would be hard to proclaim which plant wins as the worst terrestrial invasive species in the US, but Japanese Knotweed, Polygonum cuspidatum, is a clear contender. The World Conservation Union considers it to be one of the world’s worst, if that’s any indication. Even where it grows naturally, in Japan, it is said to be capable of surviving burial by volcanic lava and landslides, its hearty roots waiting below ground for more favorable conditions to resprout. Knotweed can tolerate acid soils, heavy metal concentrations, air pollution, and has even been observed surviving salt water in order to spread to new locations. It can grow in full sun and shade, and dry, low nutrient soil, although it clearly thrives in moist conditions.

In the estuary region, and throughout the Connecticut River watershed, Japanese Knotweed has a solid foothold (and according to one account, it has taken over more than 200 acres of parkland in nearby New York City).

It’s easy to see how Knotweed would have been seen early on as an appealing ornamental: heart-shaped leaves, a spray of creamy white flowers in late summer, and especially its jointed stems that look like bamboo—hence its common name Japanese Bamboo. Once outside of its natural habitat, it’s virtually bug and fungi free. And it’s a quick—and as it turns out, fearless spreader.

The United Kingdom has experienced this plant for longer than we have here in the states; it was introduced, via a gift from a Dutch doctor-in-residence in Japan, to Kew Gardens in 1850. It made it across the pond to us in the late 1800s. While this may not seem relevant to our estuary, it is noteworthy that today within England and Wales the presence of Knotweed has taken on legal significance. This plant must be declared on residential property sales documents during real estate transactions; British banks have gone so far as to say that a mortgage will not be issued if a property has, or is near Knotweed, unless a management plan is in place. In Wales, it is a criminal offense to plant it, and elsewhere in the UK, having been classified as a “controlled waste,” Knotweed must only be transported by a registered waste carrier.

Knotweed, as it turns out, is capable of impacting building foundations, surfacing through asphalt, lifting pavement so as to become a tripping hazard, and obstructing site lines. It has limited soil binding capacity, which can lead to erosion, especially along watercourses. And it grows, well, with reckless abandon.

Although this plant is insect pollinated and produces seeds that are dispersed by the wind, it’s the roots of Knotweed (known as rhizomes) that make this invasive plant notable and does the lion’s share of distribution, and damage. Rhizomes are modified, fleshy stems that run horizontally underground and are capable of sending new roots downward as well as new stems above ground; it’s an effective strategy that is shared by a number of problematic plants. It is also why trying to smother Knotweed with a tarp is ineffective.

A 2019 article in Slate magazine refers to a Knotweed researcher in New Hampshire who uncovered a 32,000-square-foot (more than half the size of a football field) network of Knotweed plants connected underground, and believed “almost certainly” to be the same plant. In 2000, two biologists analyzed 150 samples across the UK and similarly concluded that they represented a clone of the original plant dating back to the 1850 introduction through Kew Gardens. When fresh, the plant’s fleshy roots are described as carrot-like in color and consistency and withstand the “snap test” before turning woody with age.

Closer to home, Knotweed in Connecticut is prohibited from importation, movement, sale, purchase, transplanting, cultivation, and distribution, according to the state’s General Statutes. It is similarly listed in other states across the nation; this plant is most problematic in the Northeast, upper Midwest, and the Pacific Northwest. Notable in the Estuary region, and because of the ecological significance of our coastal waters and the Connecticut River watershed, Knotweed is on the radar of most conservation organizations, active Land Trusts, and local environmental advocates for the threat it imposes to our natural resources.

Especially troubling is the ability, and preference, of Knotweed to invade riparian—riverfront—land, where it rapidly outcompetes native vegetation while being a poor substitute as wildlife habitat. Despite its rapid and aggressive growth, Knotweed fuels few food webs and displaces the native plants that can. There is some evidence that in addition to bullying existing vegetation in these areas, Knotweed also employs allelopathy—it releases chemicals that suppress the growth of would-be competitors. And the location next to moving water in riparian areas means that Knotweed—a plant capable of regenerating from a fingernail-sized sliver of stem or root—will readily ride the current to establish new plants further downstream.

Can anything be done about this plant? The one thing that everyone is in agreement about is that there is no quick fix for Japanese Knotweed removal, underscoring the importance of rapid detection and removal of newly established occurrences. Early detection also increases the potential for less damaging control techniques. And any effort needs to take into account both the above and below ground parts of the plant, as well as bullet-proof disposal.

Scientists in England completed the first phase of the world’s largest Japanese Knotweed field trial in 2016, testing control methods. Despite the results showing that no control treatment delivered complete eradication within a three-year period, the use of the herbicide glyphosate (a.k.a. Roundup) was the most effective treatment when applied at the correct growth stage, and using the correct dose and coverage (both sprayed and injected). Control with the herbicide glyphosate takes three to five years, and in New England, its use may be subject to local permit and posting requirements if associated with wetlands. The investigators further recommended that stakeholders “discontinue the use of other widely used herbicides…and unnecessary physical control methods (cut and fill, summer cutting and excavation) that add equipment and labor costs and increase environmental impacts, without improving control compared to spraying alone.” 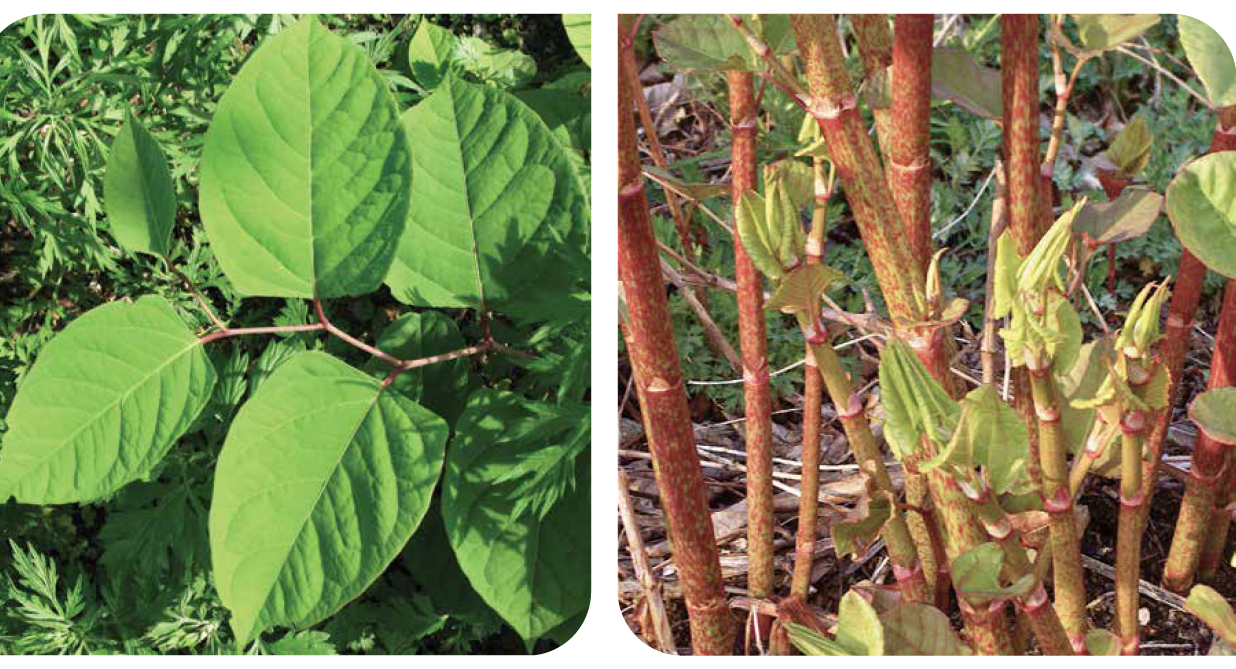 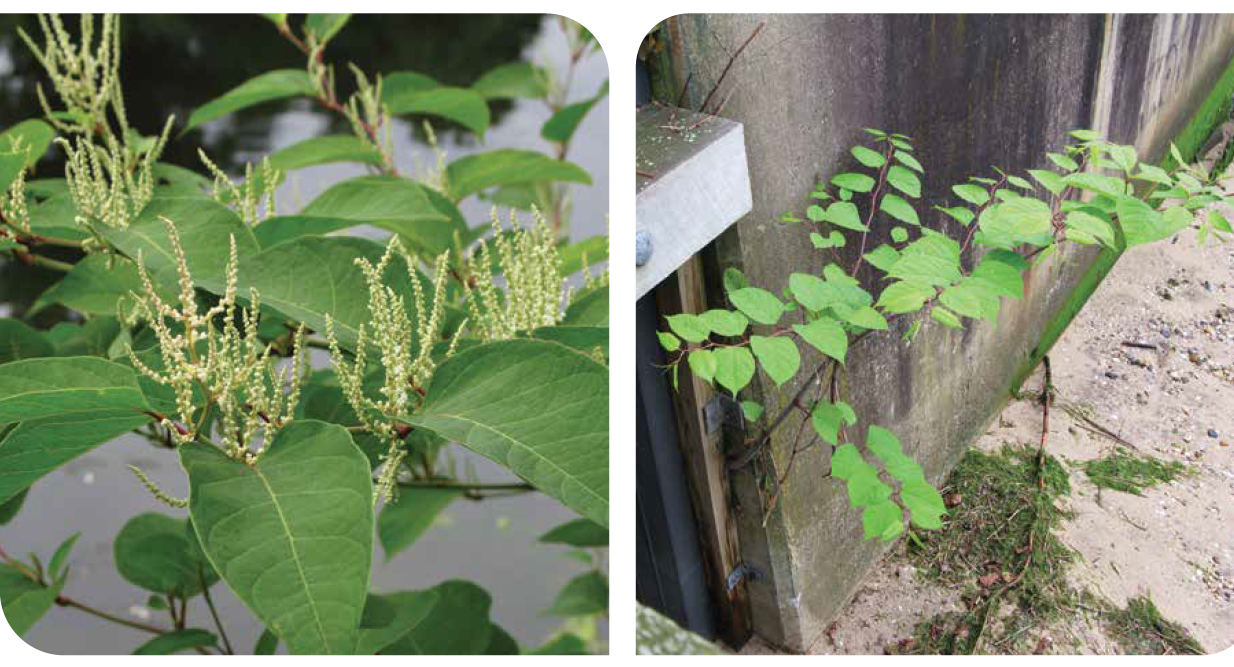 Back to early detection. If caught soon enough to make hand cutting feasible, it is possible, with persistence, to control and even eliminate areas of Knotweed, and without the use of chemicals that can come with their own environmental consequences. In Connecticut, local efforts, such as “Nip the Knotweed” in the Estuary region, have focused on strategic, repeated cuttings designed to essentially rob the plants of the energy that drives their root system. Persistence, and attention to when and how the stalks are cut, is important. And it will take a minimum of three years. Disposal, although not regulated in this part of the world, yet, is also critical: Knotweed is seriously intent on persisting and has demonstrated that it doesn’t take a whole lot of any portion of the plant to succeed.

Perhaps the greatest threat, at this point, is the lack of public awareness about Japanese Knotweed. Admittedly, my own dad once transplanted a clump from my grandparents home in New Hampshire (“It’s just like a bamboo plant!”), and spent a concerted effort, eventually, to get rid of it once it was established in our backyard. And at a talk that I gave in Norfolk, Connecticut, a retired physician proudly presented me with a potted Knotweed plant that I could use for fresh greens (until I, or any other recipient, might grow tired of it and perhaps add it to the backyard brush or compost pile).

The increasing interest and emphasis on using native plants in our local landscapes takes on increasing significance, and urgency, as we come to realize how persistent—and destructive—some non-native substitutes can be. In the internationally significant Connecticut River Estuary region, the stakes are high. And the opponent formidable.

Judy Preston is a local ecologist active in the Connecticut River Estuary. This is her third article for Estuary about a non-native, invasive plant species. 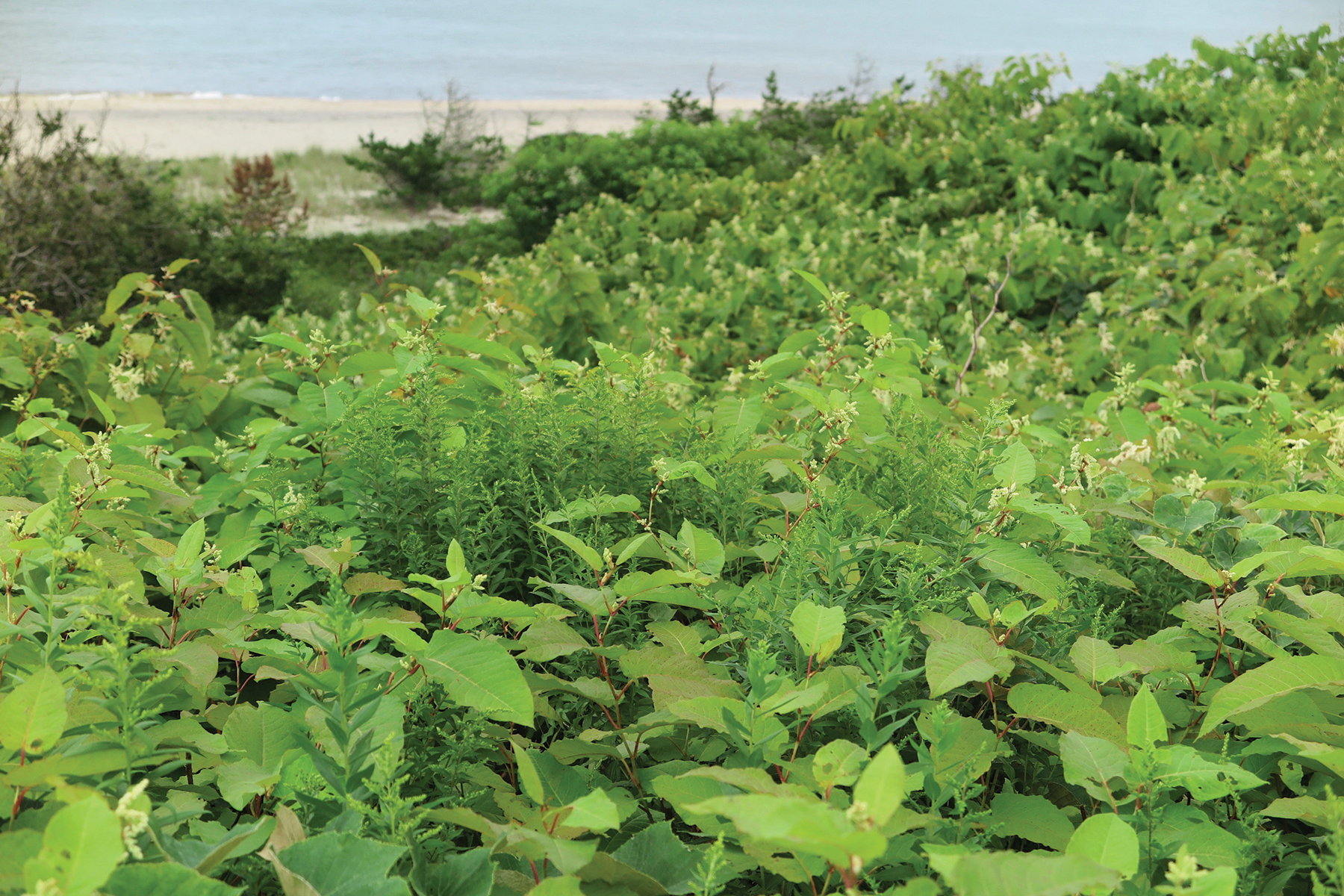 Showing ecological amplitude of this plant: full sun and sand (and in competition with beach dune grass, which does a better job holding the dune together in storms).