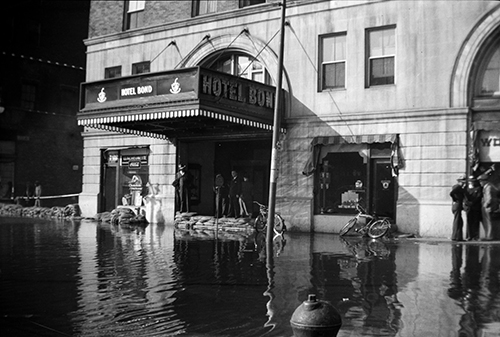 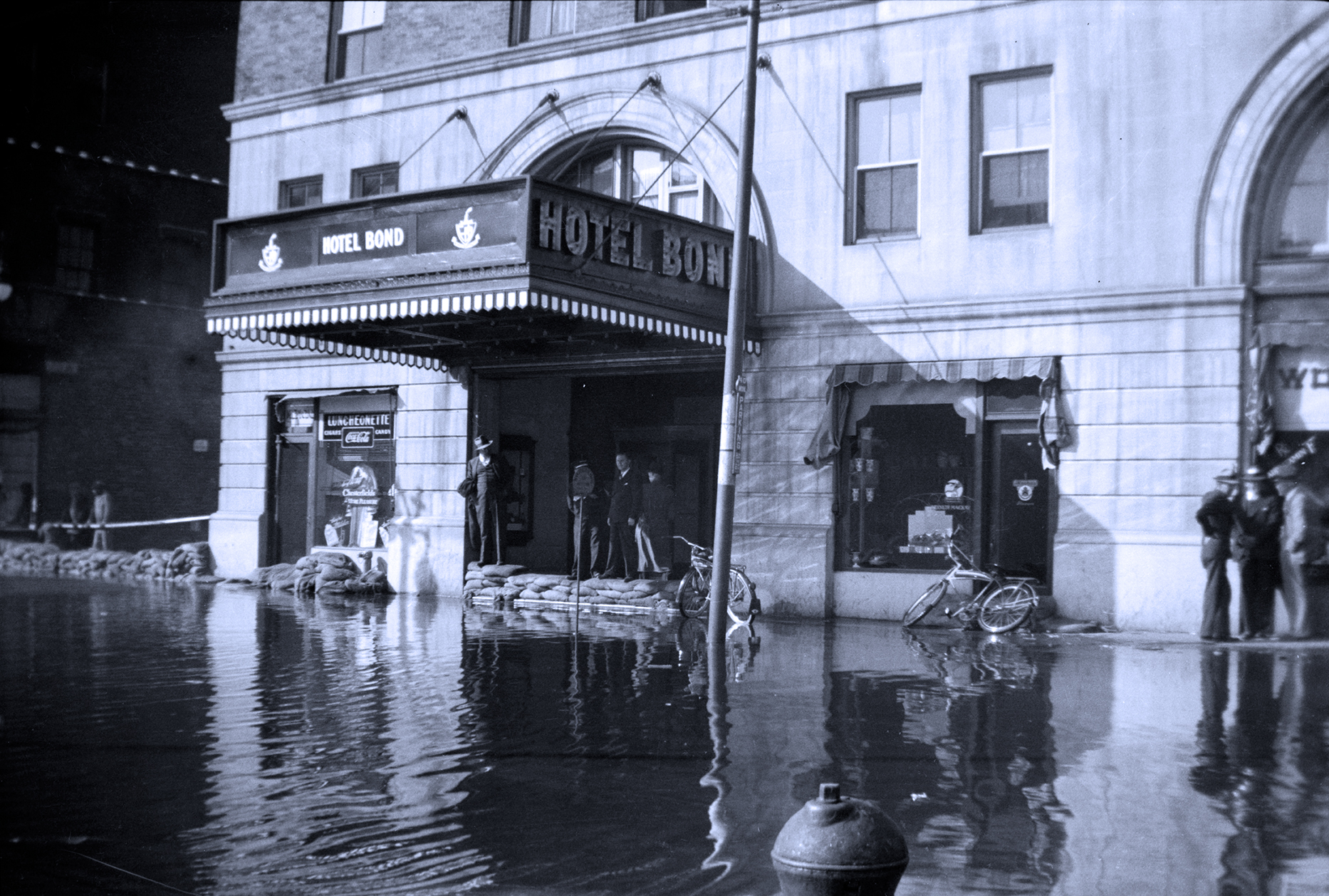 People gather near the Hotel Bond in Hartford, CT, during the flood of 1936.
Photo by John F. Dreier/Wikimedia Commons, CC-BY-SA 3.0.

The Forgotten Flood
of 1936

On March 11, 1936, rain began to fall on the hills of Vermont and New Hampshire. The next day it didn’t stop, nor the next, depositing at least five inches of water over New England. The snowfall had been heavy that winter, and as snowbanks washed off the hills, people stared nervously at the rapidly rising levels of their local streams and rivers. Then the rain continued, with a second downpour from March 16th to 19th. The White Mountains were hit again, and the Berkshire Hills emptied several inches of rain into the Deerfield and Westfield Rivers. New Hampshire’s Pinkham Notch recorded 22.43 inches in less than two weeks.

All 148 tributaries along the 400 miles of the Connecticut River swelled with rain and snowmelt. Seven-year-old Elizabeth and five-year-old Donald Rattee were washed off a footbridge in Hancock, Vermont. In nearby Windham, Harold Smith tried to divert water from flooding the cellar of the lumber mill, and drowned, leaving his own twelve children without a father. Barns and farmhouses, schools and stores, roads and railways, all began to flood, and within hours were in danger of washing away completely. Chester Wilda of Hadley was trying to save his boss’s farm with sandbags when a huge iceberg drifted by and destroyed their truck. 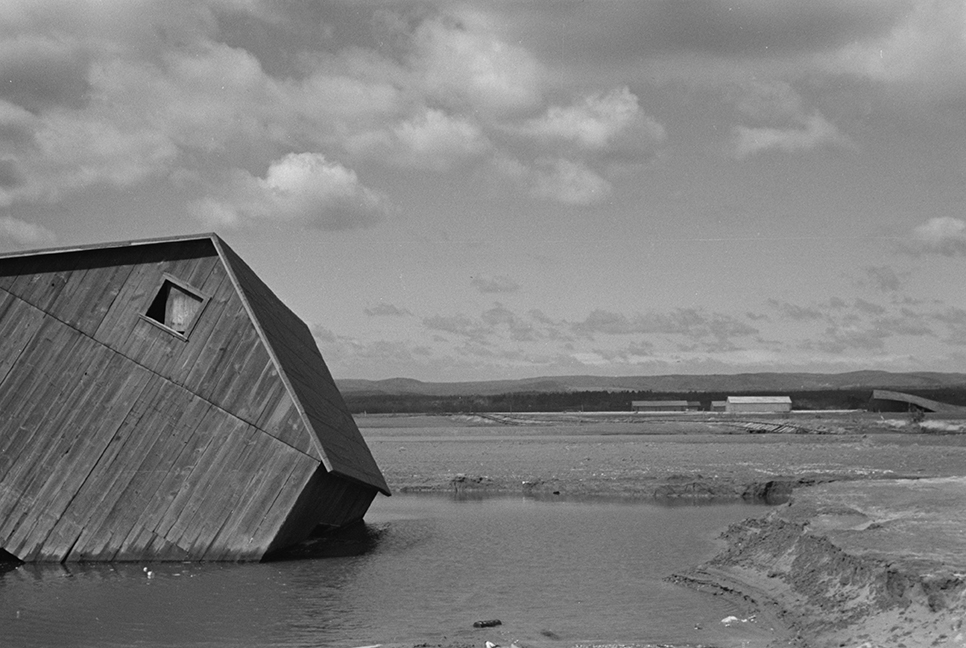 Tobacco fields and farm buildings devastated by the Connecticut River flood in 1936 near Northhampton, MA.
Photo by Paul Carter/FSA, Library of Congress Prints and Photographs Division.

Large chunks of ice jammed the larger rivers, creating dangerous lakes ready to burst. In Vernon, Vermont, water rose nineteen feet above the dam, causing it to crumble. Blocks of ice smashed through the upstream walls of the power house, while National Guard and local volunteers desperately stacked sandbags to save the building. At the Holyoke Dam, piles of ice forced the Connecticut River to cut a new channel around it to the east. When the ice finally broke apart, the water knocked the top five feet off a 1,000-foot-wide section of the granite dam. The terrifying crack could be heard for miles across western Massachusetts.

Temporary lakes surrounded hilltop villages, cutting off entire sections of the New England hinterlands from civilization. By March 18, even Springfield, Massachusetts, became an island. State police ordered the entire valley evacuated. Thousands of people fled their homes, but many more were caught in their houses, watching the water rise higher and higher, peering down from their second-floor windows into the icy muck. W. Robert McDonald remembered sewer covers popping into the air and clambering out of the windows of his parents’ house into a rescue boat.

In Connecticut, a two-hundred-foot-wide dam in New Hartford burst, releasing eight million gallons of water. The entire Farmington River Valley evacuated. In Hartford, the floodwaters rose to an astonishing 38 feet above normal. On Jewell Street, firefighters trying to pump out their company’s building had to abandon their steam pump when waters rose above their heads. Damage to oil tanks caused spills, and tilting utility poles and sunken lines created the dangerous possibility of electrocutions. Undermined streets and bridges collapsed and washed away. 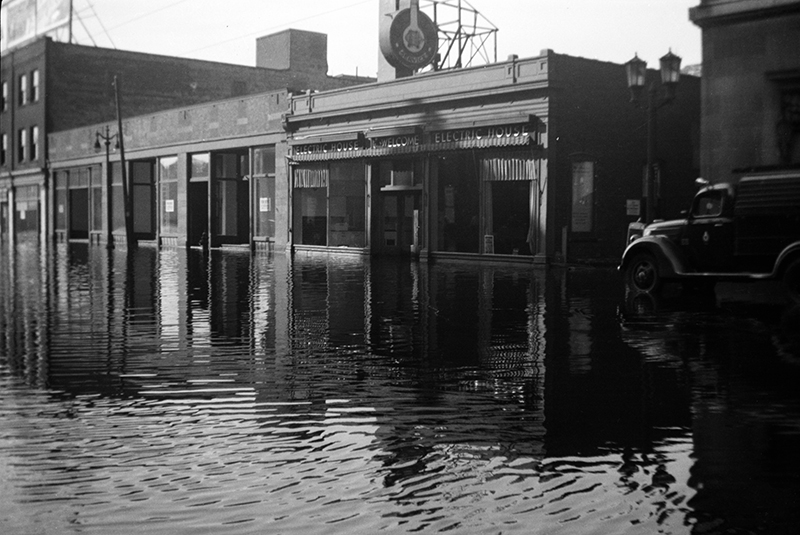 For days, Bushnell Park became a lake, and the standing water on Trumbull Street reached halfway up the front windows of the buildings and poured inside. Guests checked out of the Bond Hotel by getting into a rowboat by the steps, rowing across the lobby to the front desk to pay their bill, and then continuing to the railroad station upstream.

Downstream, the center of Chester nearly collapsed, and lumbermen in Deep River watched their boards and equipment float out toward Long Island Sound. All along the 400-mile stretch of the Connecticut River, phone lines died, electricity winked out, and surgeons performed operations by battery-powered lights and candles. Amherst College turned its buildings into refugee camps. The Coast Guard struggled up the swollen River in a flotilla of ships to help the recovery.

Then the looting began. National Guardsmen were ordered to “shoot on sight” anyone caught taking advantage of the disaster. They had to use boats to patrol the cities of Hartford and Springfield, using huge spotlights to illuminate the darkened streets and buildings. In Northampton, Massachusetts, the mayor had to deputize citizens to protect flooded sections of town. Rose McKenna remembered her father staying at the house with their dog to dissuade looters while the rest of the family fled. He finally agreed to leave on a boat after watching a neighbor’s house collapse.

Although the Connecticut River watershed received the most damage, the Merrimack in New Hampshire was also deluged, wrecking any hope that the Depression-bankrupt Amoskeag Mills in Manchester could ever be opened again. Mainers lost bridges across the Kennebec and Androscoggin, saving one at Lewiston-Auburn by driving cars full of gravel on top of it. As far west as Pittsburgh, Pennsylvania, and as far south as Washington, DC, everyone experienced record floods during this devastating month of rain and snowmelt. 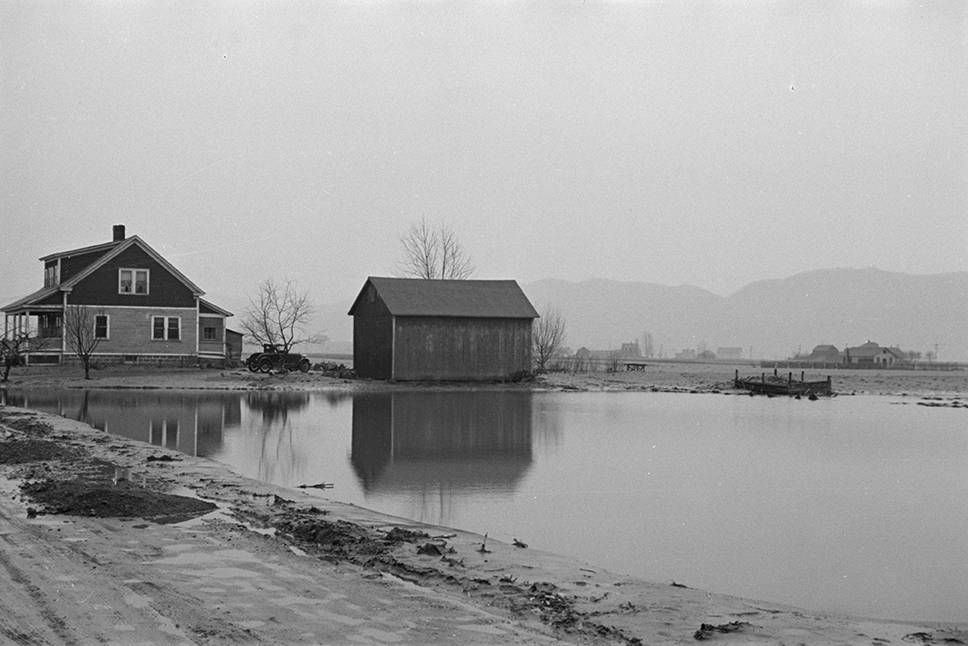 The Flood of 1936 toll on a homestead near North Hatfield, MA.
Photo Credit: Paul Carter/FSA, Library of Congress Prints and Photographs Division

Finally, the floodwaters began to recede. They left a devastated landscape, with houses floated off foundations and ruined cars rusting in lots throughout the region. Wreckage had piled up against the bridges and overpasses, some of it so tangled and extensive that it had to be dynamited. As people began to pump out their cellars and haul away the tons of accumulated debris, there were more accidents, like Charles Serafini of Hartford, who accidentally stepped into a deep pit on Van Dyke Avenue and drowned. When the final death count was added up, it reached at least 171, and more by some accounts.

In the weeks and months after the flood, residents stood in bread lines organized by the Red Cross. Over 400,000 refugees from around the region needed food, water, and shelter throughout the spring. The damages were incalculable, but reached an estimated half-billion dollars, at least twenty times that in today’s money. Many businesses already suffering from the Great Depression gave up the ghost. 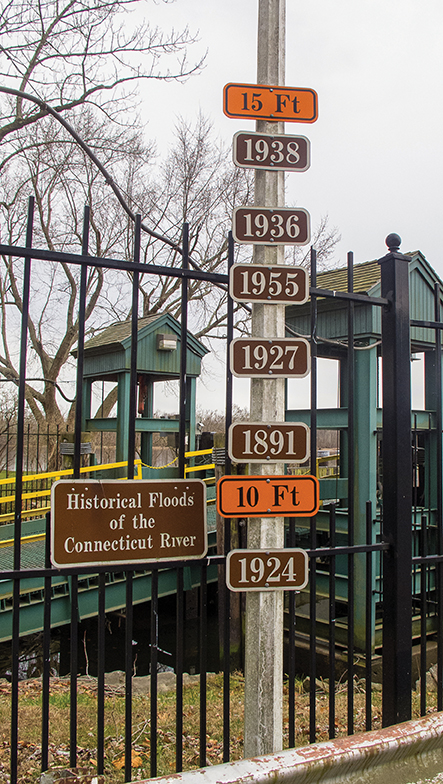 Historic flood levels of the Connecticut River are marked on a pole next to the ferry landing in Hadlyme, CT.
Photo by Christopher Zajac

The flood had left three feet of mud in many places, and countless pools of standing water that bred mosquitoes and other disease. Doctors vaccinated citizens for Typhoid Fever at local hospitals, treated people for injuries sustained in the cleanup, and prepared for more long-term illnesses. By April 5, the Hartford Courant published a retrospective of the disaster, saying that the experience had been “the most terrifying and spectacular” in the history of the city, and that its “vivid impressions” would “live forever in the memories of those who saw and went through it.”

That June, President Franklin D. Roosevelt signed the Flood Control Act, which enabled the Army Corps of Engineers to build levees and flood walls throughout America. Members of Roosevelt’s Civilian Conservation Corps arrived in towns along the River to help with the cleanup. They had their work cut out for them; some towns did not recover until after World War II, and others, like South Hadley Falls, took decades.

Two years later, the Great Hurricane of 1938 would cause an even greater economic disaster, kill hundreds of people, destroy millions of trees, and leave an even more indelible mark on the Connecticut River Valley. These twin disasters would meld in public memory, and become small parts of the woeful tale of the Great Depression. Nineteen years later, the Flood of 1955 would cause more damage in southern New England.

As the centennial approaches, few now live who remember those terrible weeks. For the rest of us, we have new disasters and new tragedies that crowd out that far-off event. The rivers of history may shift uneasily in their beds, but they keep on flowing, inevitably and surely, to the sea. 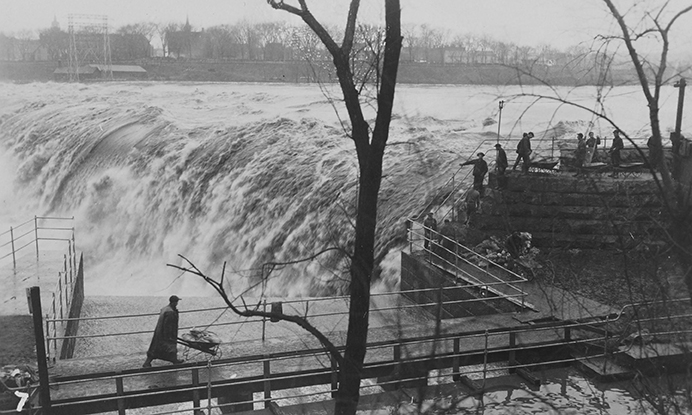 Holyoke Dam, March 19, 1936. The water level was at 17 feet when this photo was taken.
Courtesy of South Hadley Public Library/digitalcommonwealth.org