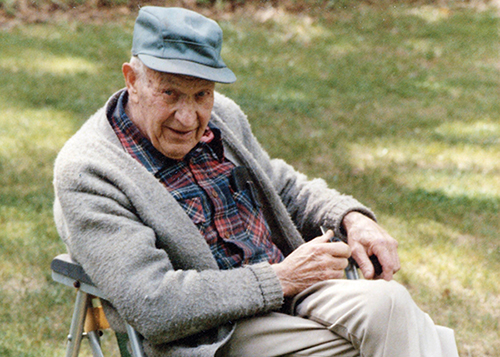 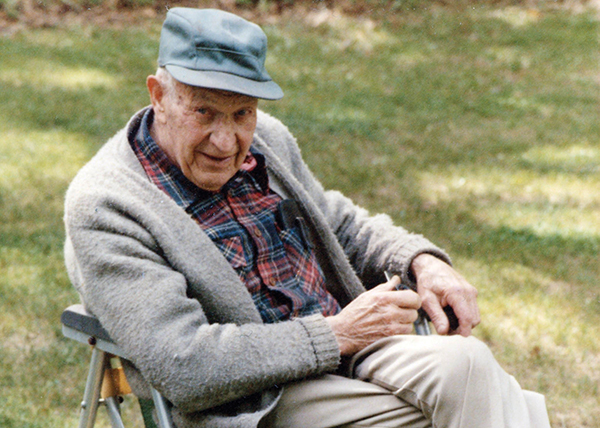 Last of the Legendary Watermen

Oliver LaPlace was born on the Connecticut River, almost. The family homestead in Lyme backed up to its eastern shore. They had to keep a close watch on young Ollie, especially during the spring freshet. He was drawn to the water something fierce.

Oliver LaPlace would spend virtually his entire life, from 1901 to 1987, on the banks or out on the mighty Connecticut. He was imprinted on it early, like a duckling is to its mother. A master carpenter and shipwright, he built his house in Essex smack dab on the water, with a dock and a boathouse, ringed by duck blinds he’d scattered about North Cove.

He had as much claim to the Connecticut River as the American shad that filled his nets in the spring, or the muskrats he trapped in the winter, or the elusive rail birds he guided out-of-state “sports” to shoot in the fall, or the giant snapping turtles that became soup. Oliver LaPlace was a force of nature in the most literal sense.

By all accounts, he was a quiet man, especially around people he didn’t know, but then again, he knew a lot of people. Even more knew him. And yet he didn’t mind being alone for hours in a soggy duck blind, or silently polling his rail boat, Bluebell, through frigid marshes. He was comfortable with himself and with what he did. 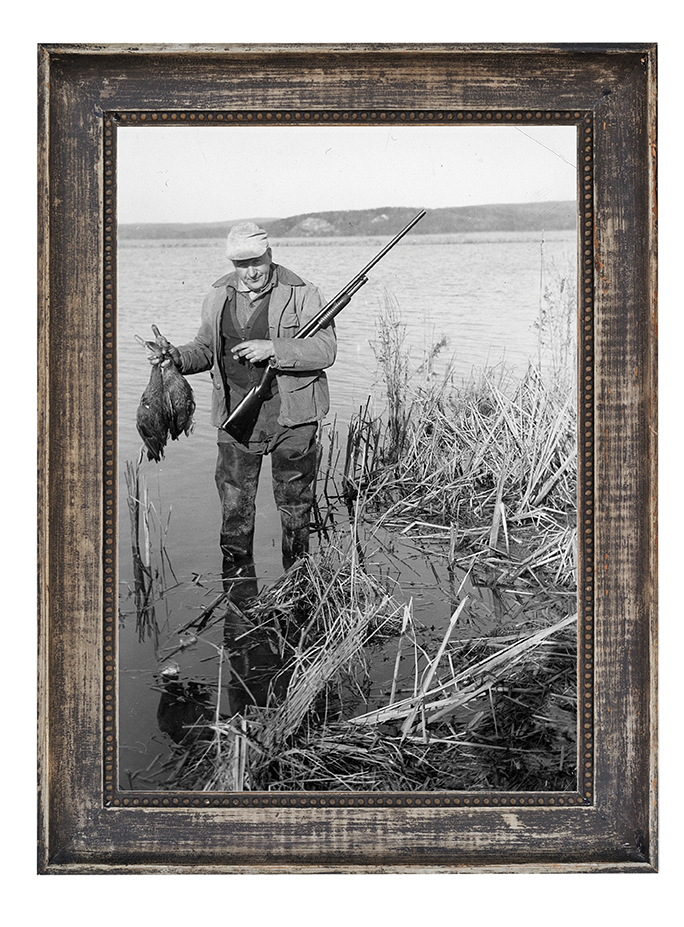 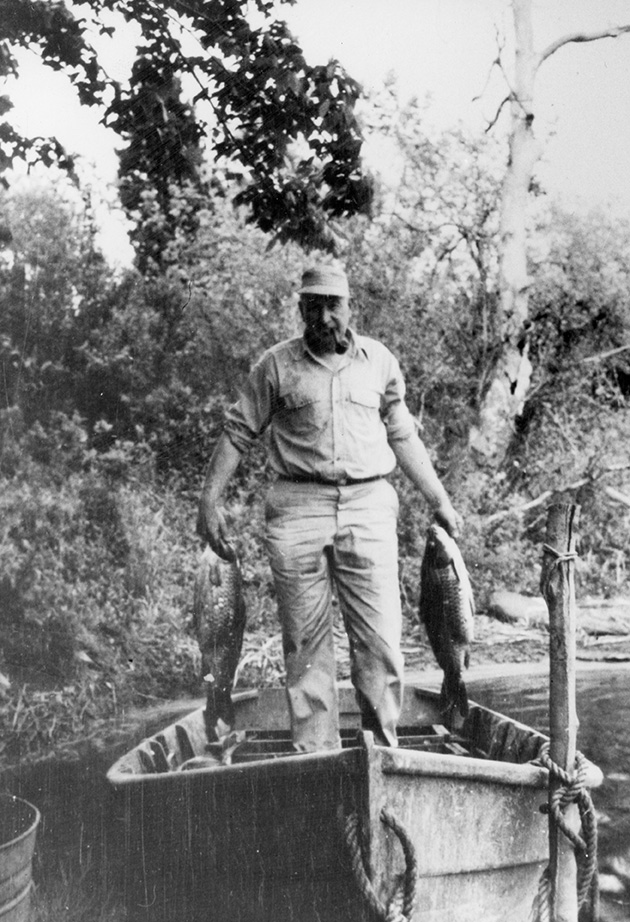 LaPlace with a catch of shad. 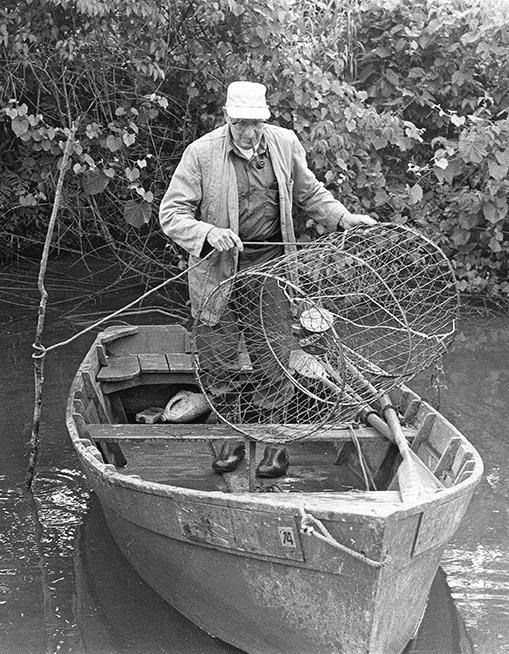 LaPlace and his turtle traps

And what he did was extraordinary. Towards the end of his life, there was no one else left who could do the things that he did. There were no more river guides, like the ones who had guided him—the old timers, known as “watermen,” who viewed the Connecticut River as their backyard.

Oliver LaPlace was, indeed, a proud waterman. He earned the title through ingenuity and determination. He could fish nights, pack the shad in ice to ship to the Fulton Fish Market in New York City, then go to work building wooden boats the next day. He was the kind of person who could make a better turtle trap—or an eel throater (don’t ask and don’t bother Googling it: you won’t find it). If civilization had shattered overnight, like a busted streetlamp, Oliver and his family would have gotten along just fine.

Because he was the last and the best at what he did, Oliver LaPlace quietly grew famous. People came from all over—from New York and New Jersey, heck, from Florida—to go hunting with him. He travelled light; he didn’t need a duck call because he was conversant in avian languages. What he didn’t know about the River wasn’t worth knowing. He got written up in the local Gazette and the New York Times. Everyone in Essex and thereabouts knew who Oliver LaPlace was.

The state encouraged him to trap snappers because they prey on ducks and other game birds. He’d catch dozens at a time and off they’d go, live, to New York City restaurants. One reportedly topped 50 pounds. Watch your fingers! He planted wild rice along the river for the state, too. He knew where all the best places were.

Where once there had been many watermen, by 1980 there was only one left standing. Oliver LaPlace had become river royalty. He had his own table at the Griswold Inn on Main Street in Essex, where twice a week he held court. He was a regular on banjo night and would “play the spoons,” mostly in time, with the band.

Patrons had to pass by him to get to the bar. He’d have a beer with a coffee chaser and chitchat with folks. He used to say of his nights out, “I meet a lot of people there; I can’t remember their names, but I love them all.” He once reportedly told Bill Winterer, the late owner of “The Gris,” “Bill, I don’t know why all these people want to talk to me.”

He rarely had to pay for his beer. People wanted to know how the fishing was, or the eeling, or the gunning. He was always smoking his pipe, and he talked like no one else in the place—sounded kind of like a Mainer, but he wasn’t, of course. He talked the way Connecticut Yankees up and down the river talked before the rest of us showed up. Oliver LaPlace was the genuine article.

Late in his life, the Connecticut River Museum in Essex, down at Steamboat Dock, honored Oliver with an exhibit of his winsome decoys, which work well gracing a mantelpiece or floating seductively in North Cove. He gave them away to friends and family like they were Halloween candy. Other artifacts of his are on permanent display, including the aforementioned eel throater.

Eastern Connecticut was still a frontier when Oliver LaPlace was born. It was the wild, wild East. The interstate wouldn’t get there for another 60 years. The locals crossed the River by ferry, and steamboats from Hartford and Middletown, bound for New York City, stopped at Essex to pick up passengers, along with boxes of iced roe shad, eels, and whatnot. Unrestricted market hunting, the wholesale slaughter of ducks and shorebirds for meat or their fashionable feathers, was still common, if waning, in 1901. Oliver shot them, too, but retail, in relative moderation, abiding by the new hunting laws.

Like Mark Twain, another Connecticut Yankee (albeit a transplant) who was still alive when he was born, Oliver was fascinated by steamboats. And like Huckleberry Finn, young Ollie would camp with friends on the islands that punctuate the Big River, hunting and clamming and fishing to pass the time.

Decades later, he’d take his children and grandchildren out on the river for picnics on Selden Island. What Huck said about rafts applies to rivers as well: “Other places do seem so cramped up and smothery, but a raft don’t. You feel mighty free and easy and comfortable on a raft.”

As hard as he could be on riverine wildlife, Oliver LaPlace was kind to his own species. In the 1950s, Ned Libby and his teenage friends used to play in the gravel pit near Oliver’s house on River Road in Essex. They naturally were drawn to the weathered man who did intriguing things down by the river. He might be carving a decoy or beheading a snapping turtle or plucking ducks for dinner—doing stuff their parents never dreamed of. Oliver would let Ned tag along shad fishing or duck hunting, showing him the ropes, and Ned grew up to do considerable shad fishing himself. Today he remembers his mentor fondly, explaining simply, “He was a quiet man, and if he liked you, he’d help you.”

It should be noted here that Oliver and Mary LaPlace’s only son, Neil, had died in 1943 when he was 16 years old. The couple also had a daughter, Maureen.

Maureen’s daughter, Ann Roussel, has fond memories of the times she spent with her grandfather, picnicking on islands in the River or being treated to ice cream in downtown Essex. “He was like a second father to me,” she said. “On Christmas Eve, I’d spend the whole day with Oliver while my parents were getting ready for the holiday, and all of his friends would come by, one after another. It was a running party, all day long.”

She remembers that his wife, Mary O’Neill, a native of Ireland, always called him Jack; she always wondered why and finally found out. When the two first met, Oliver was so smitten that he ad-libbed, telling the winsome lass with the lilting accent that his name was Jack Murphy, that he, too, was of Irish descent. She wasn’t fooled for long, but she called him Jack ever after.

It should be noted that marrying an Irish Catholic in 1925 was not without complications for the groom, whose kin were committed Baptists.

If it is indisputable that Oliver LaPlace was a waterman extraordinaire, what is less clear is how and why he became one. His older brother, George, showed him how to hunt, for starters. Besides, the most interesting people around Lyme and Essex were the folks who plied the Big River, set their own hours, and answered to no one. In an oral history recording done for the Connecticut River Museum, Oliver explained succinctly how it was a century ago: “Some people shad fished in the spring, trapped in the winter, and loafed in the summer. Some people just made money to live on.”

Oliver was more ambitious than that. He always had a day job, and he was so skillful at carpentry and boatbuilding that his bosses understood when occasionally he had to take days off to catch shad or take people gunning. They told him to come back when he was done. But most often, Oliver did both jobs, night and day, catching his winks where he could.

Working extra hours making money on the river made perfect sense back then. He wasn’t getting rich working 9 to 5, six days a week, for maybe $6 a day during the Great Depression. The River paid better and was more exciting.

Oliver LaPlace never really retired from being a waterman. He just slowed down some. He rowed and fished and gunned right into his 80s, although he confessed that he’d grown more kindhearted by then. The word must have gotten around: once a snapping turtle crawled up on his lawn to lay its eggs. He let it be.

Andy Roussel, Ann’s husband, sat in the North Cove duck blinds with him in the early 1980s, and if all they did was talk, it was a successful outing. Oliver talked about olden days, about shad fishing in the Roaring Twenties, when he and Bluebell shared the River with rumrunners hauling their harvest of hooch. The two boats gave one another a wide berth, but the captains would nod respectfully as they passed.

In the oral history in the archives of the Connecticut River Museum, Oliver LaPlace talks about shad fishing and his life in the Great Before, when people often had to struggle to get by—and needed one another more than they do today. “Everybody was trading, you know, that’s the way Essex was,” he said. “You’d work for somebody, and he’d come back and work for you some Sunday, ’cause we worked six days a week in those days. Yup, everybody helped; your neighbor was a neighbor in those days.”

He outlived most of his neighbors. But on the day Oliver LaPlace finally was laid to rest, the Catholic Church in Essex, Our Lady of Sorrows, was overflowing with a freshet of humanity. He had died soon after the birth of his grandson. When he got the news of that blessed event, he reportedly said, “Everything is in order” and fell asleep for the last time.

But he didn’t go quietly. As the Funeral Mass came to a close, a mighty blast reverberated through the pews and everybody jumped. Outside the church someone had fired his 12-gauge Winchester toward the heavens. Who pulled the trigger remains a mystery. 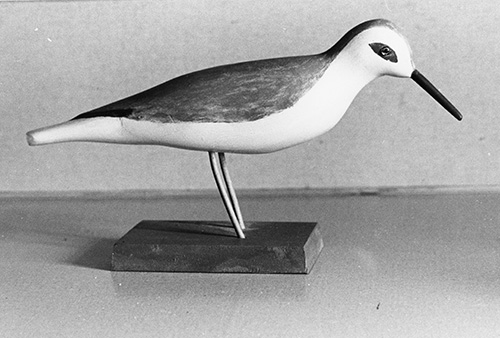