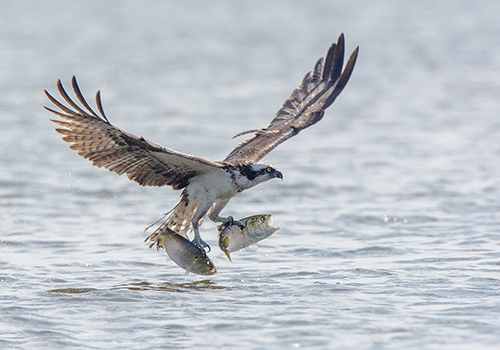 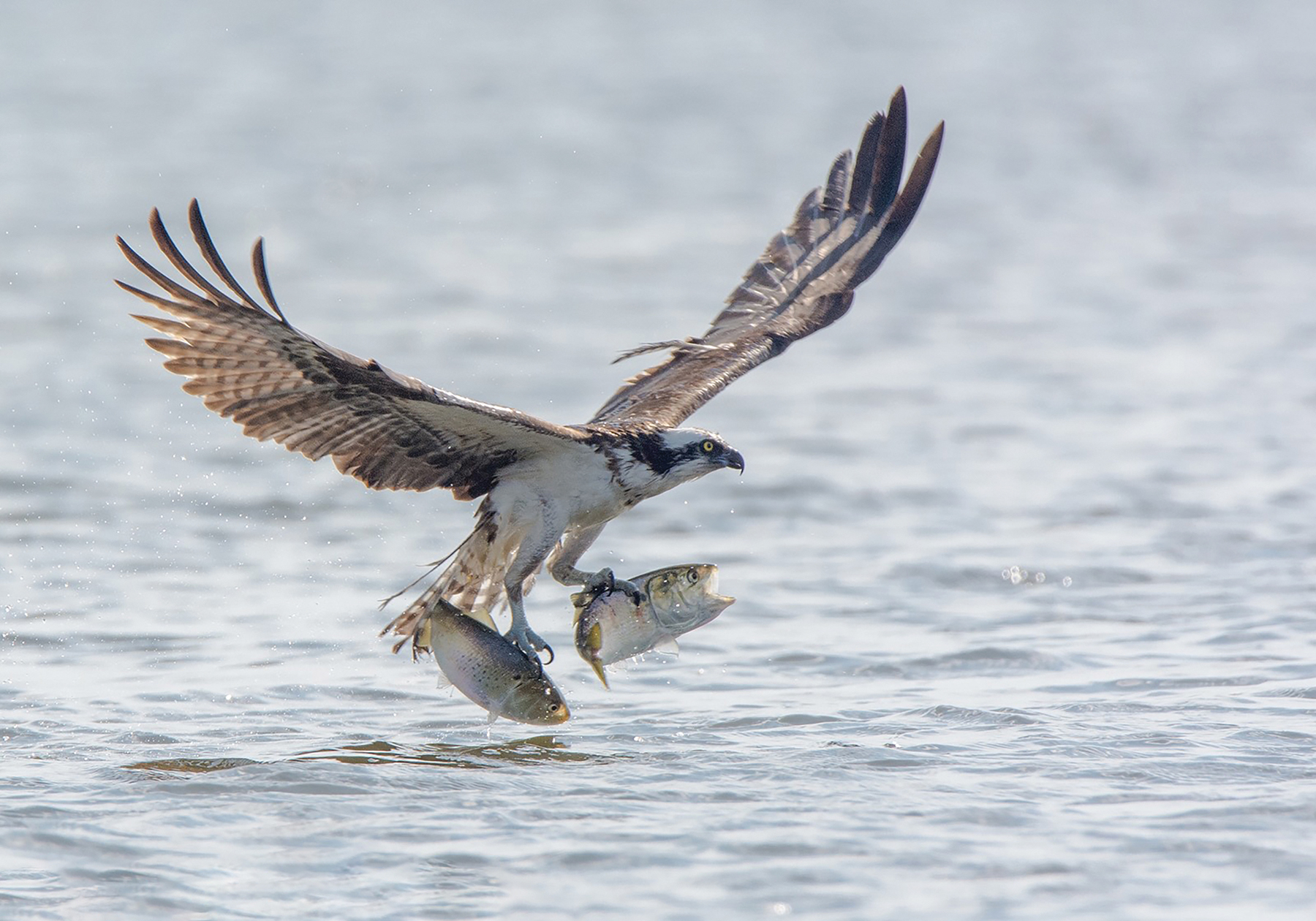 For a week, I “mirrored” the contents of 24 nest poles in the Great Island osprey colony. I use a light convex bicycle mirror on the end of a long, curved bamboo wand. Standing on the salt marsh below a 12-foot-high nest platform, with my arms raised, I could check the progress of each nest. On this day, I found the first chick; we were nearing the end of incubation, which lasts for about five weeks. Some of that time had been very inhospitable: continuous days and nights out on that cold, windy, damp, sometimes stormy marsh—for ospreys recently returned from their tropical vacation. But the eggs were carefully tucked into the nest cup, and ospreys are tight sitters. They seem to know when they are in a sanctuary. That bold female refused to fly from her nest when I approached: she stepped aside from my raised mirror and vigorously scolded me.

The eggs glow in warm tones and spots, ranging from russet to mahogany: they have come through just fine. Twelve feet below the nest, the marsh was growing a fresh carpet of green salt grasses, ruffled by the breeze. It was warm enough for me to leave my boots at home for the first time that year. I felt light-footed and nimble in reef walkers and bathing suit, dancing on that spongy plain that is laced by sinuous creeks that gave my boat access on the flood tide. I traipsed from the boat to each nest, hopping mosquito-larvae drainage ditches, while the soft new grass brushed my ankles. This was and is the Connecticut River’s sensuous front lawn: a gemlike green garden that no one has to mow or tend. The osprey nests are the living, triumphant lawn ornaments. 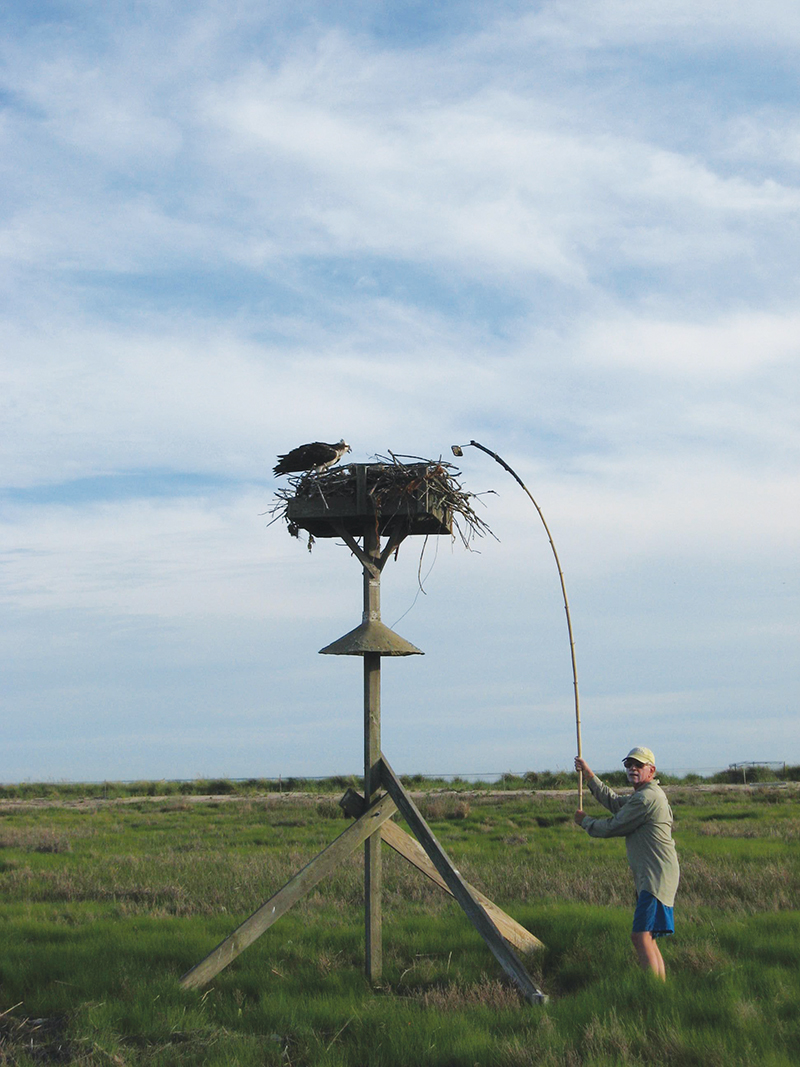 This long-established Osprey Garden is also a natural ecological laboratory that gives me a readout of Connecticut River Estuary (CRE) ecology. From the late 1950s through the 1970s, scientists studied the estuary’s heavy DDT contamination here, as the famous nest colony rapidly approached extinction. It dwindled to one nest, from 1974 through 1976. Forty-five years later, restored and thriving, this osprey habitat supports large broods of young, which are a measure of the abundance of their prey fish, menhaden. These migratory herring are the prey base for the whole coastal food chain, including bluefish and striped bass. To manage this ecosystem, human harvest of menhaden has been carefully regulated by quota since 2013.

The particular ecology of the CRE and nearby Long Island Sound makes it a menhaden hot spot. Every spring, large numbers of these famous plankton-eating fish select these waters. Swimming in schools near the surface, they sieve plankton on the bony arches supporting their gills, making them a perfect target for the osprey’s patient search and elegant dive. A succession of males returns to the colony with menhaden held below in their talons. They may display the fish in flight, hovering and making a piercing call, directing other ospreys to the prey fish. The sun illuminates the silvery menhadens’ yellow forked tails, and bright blood streams from talon wounds—so it’s like the plains of Africa out there: tactical-minded ospreys are preying on “herds” of menhaden. Successful males then consume the fish’s head on their favorite feeding perch. With binoculars, it’s easy to watch the ospreys fly across the broad marshy plain of Great Island and deliver the menhaden to the nests.

Spiritual freedom is found in the tideland; it is a separate world, beyond private property. The bright blue sky is crisscrossed by ospreys. They are now widespread in coastal Connecticut, and the salt marshes are well protected. You can seek out your own local site for this celebration of spring. If you wish, you can monitor the success of an osprey nest for Connecticut Audubon’s Osprey Nation program.

Kris Rowe and Dan Ferrier now do the Great Island nest checks. They have done a tremendous, labor-intensive job of restoring and replacing the aging nest platforms installed many years ago by Hank Golet and his Old Lyme crew. Dan uses a GoPro camera on a telescopic pole for detailed pictures of nest contents. He has devised a very stable ladder, built in a long triangle shape, to access the nests. Kris’s osprey photographs are justly famous behavioral studies. We have grand local talent maintaining the tradition of sophisticated osprey study on Great Island. The Fellowship of the Osprey lives on! 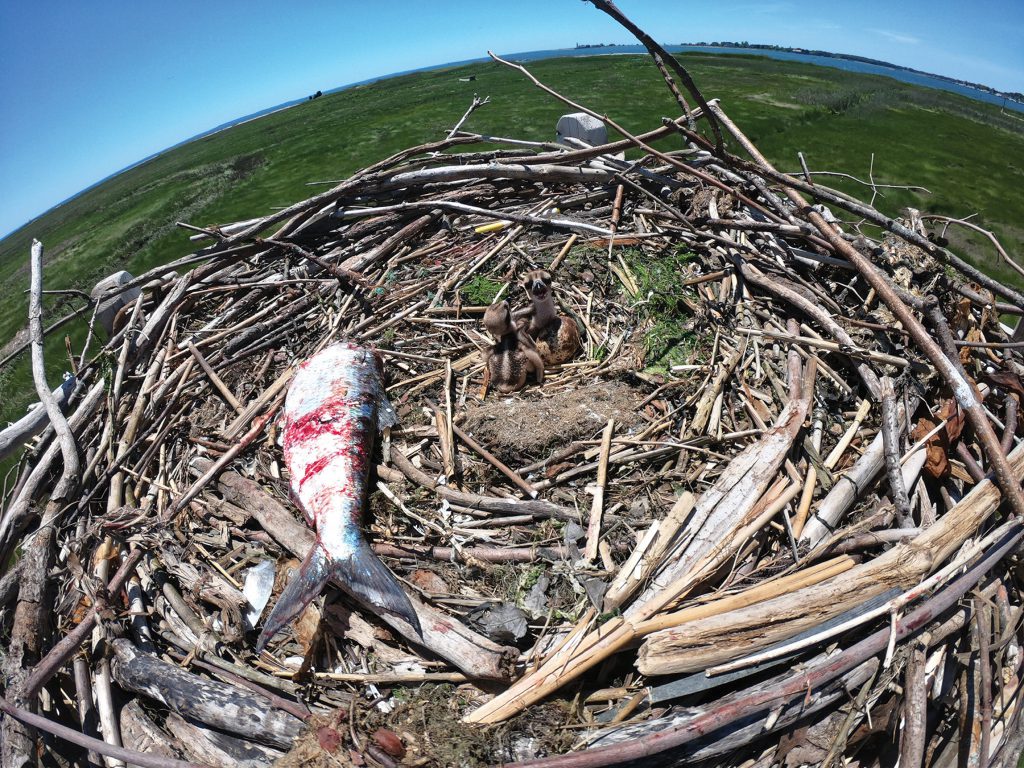