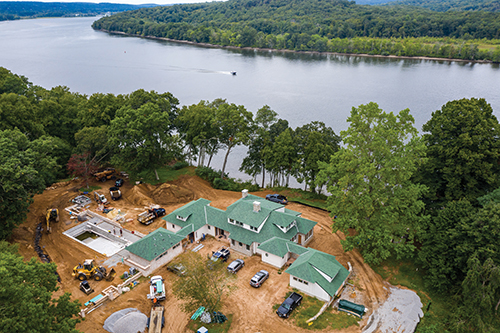 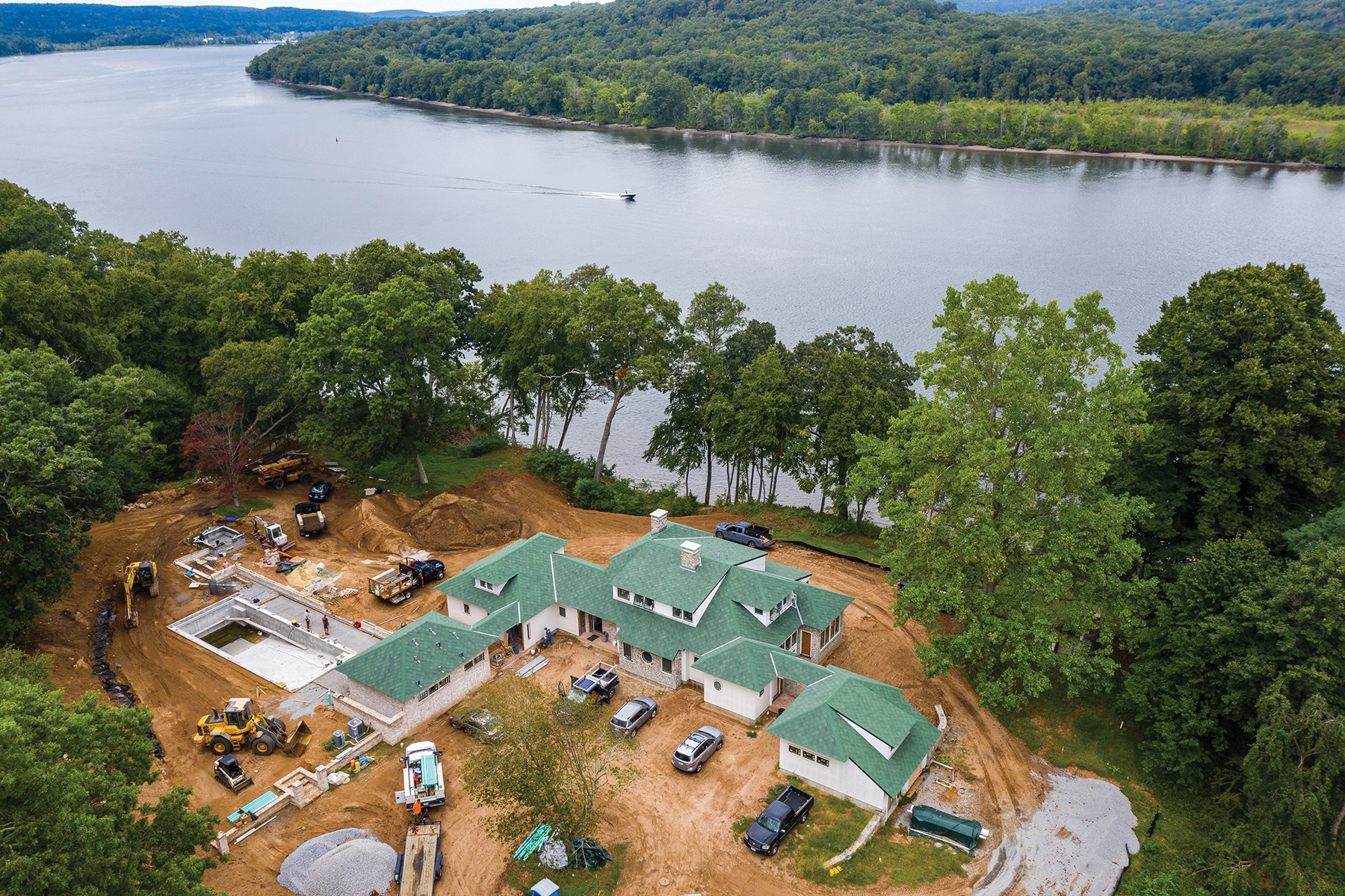 Aerial view showing the house under construction along the Connecticut River.

Building along the
Lower Connecticut

Welcome to the lower Connecticut River valley! This last section of the river, just before and as it reaches the Atlantic Ocean, is a scenic and grandiflora tour de force that rivals any along the eastern seaboard of the United States. Birders, naturalists, and the first American Impressionist painters—anyone in love with nature and her bounty—have for centuries known about and continue to find wonder in and draw inspiration from this greenest of green deviants from the generally-overpopulated coastline. 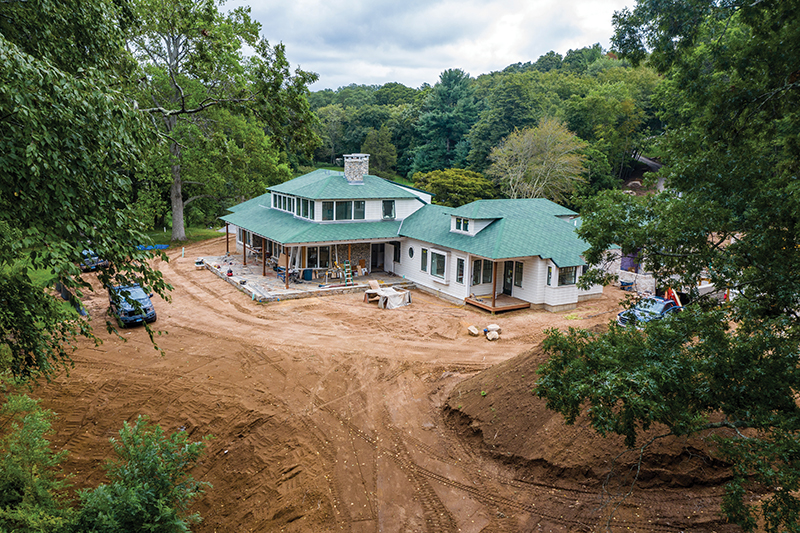 Most of the site of the build of Riverbend, a home that spreads across the sprawling, elevated property. It is low-slung to hug the landscape, and features breezeways that both frames views to the river and also tethers distinct volumes.

Such are the cries from prospective homeowners who fall under the spell of this special place. The catch-22, of course, is that they don’t want to disturb, and yet must disturb (just enough) to build their “Forever Home.” They will quickly discover that in order to move forward with any construction project, they will be subject to the close scrutiny of a number of regulatory agencies committed to ensuring that what they propose falls within strict guidelines governing activity along the river.

For starters, because it has been designated as a scenic corridor, a place that should look and feel much like it did 300 years ago when settlers first set eyes on it as they traveled upriver, it is protected by the Gateway Commission. Gateway is concerned about clearing of trees, for visual disruption as well as erosion. They seek to limit development that will introduce fertilizer into the waters, create light pollution and unwanted reflectivity, and present harsh colors and undue building mass. The Gateway Commission is an advisory board to the Connecticut towns that border the River as it approaches the ocean, and their voice is heard loud and clear. The eight member towns that fall within the Gateway Conservation zone are Chester, Deep River, East Haddam, Essex, Haddam, Lyme, Old Lyme, and Old Saybrook.

Another overseer is the Department of Energy and Environmental Protection (DEEP). A prospective homeowner is required to acquire a Coastal Area Management (CAM) permit from DEEP. Such approval requires that considerations have been given to erosion and sedimentation control (during and after construction), clearing, and stormwater management (the rainwater displaced by the building must be directed to controlled areas of infiltration). DEEP, along with the Army Corps of Engineers, will also review applications for docks, sea walls, or any other activity along the water’s edge.

The Connecticut River Area Health District (CRAHD) weighs in on the viability and compliance of a septic or other waste management system, arguably the most controversial aspect of construction along the riverfront. Test pits should be dug early in the process to ascertain that soils are porous enough and will accept a system, given especially the existence of ledge in the area. The presence of ledge affects the suitable areas for a septic and thus the viable locations for a building that contains sanitary systems.

Running high cover over all of this is the local zoning board. Each town receives advice from Gateway and DEEP regarding best practices, along with the critical science of CRAHD, but ultimately, they have the final say in whether and how a project will be executed in a sensitive area along the riverfront. Typically, such approval takes place as a Special Permit, wherein the project is presented in a public hearing, and those interested can voice their opinions on the efficacy of the proposal. 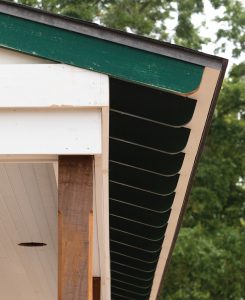 Let’s look at a specific residential project currently under construction on the Connecticut, in Deep River, Connecticut. The homeowners, a young couple from West Hartford with two college-age daughters, had spent time in the area as they keep their boat at a marina in nearby Essex. They became enamored of the region, dreamt of a home there, found some land, and closed on it—eight acres, elevated well above the flood plain, with views across to Selden Island and the largely pristine Lyme hills. Further, because the River turns at that point, there are views up and down River, creating a fantastic panorama. A very old house, not worth salvaging, had nevertheless been positioned to take advantage of these same opportunities.

Their challenge to the architect: create a home that captures these views, connects to the setting, feels comfortable on the property, and looks like it belongs there. Such a broad but compelling charge was perfect for the architect seeking to meet the wants and needs of the homeowner and the unique character of the site.

The architect began by looking at the pieces that make up traditional riverfront construction and assembled a kit of parts that included, for instance, small stones or river jacks, the smooth stones that form the riverbed; exposed rafter tails that support deep roof overhangs; and Novelty or Dutch Lap siding, a wall cladding seen on indigenous outbuildings in the area. 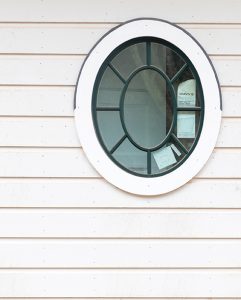 The result is a home that spreads across the sprawling, elevated property. It is low-slung to hug the landscape and features breezeways that both frames views to the River and also tethers distinct volumes; this created the overall impression of mass and the historical impression of multiple structures.

Because the home is comprised of these time-honored elements, it has a vague familiarity. Connections might be made to Adirondack camps or traditional coastal inns. The home has been christened “Riverbend.” Details, masonry, and overall composition make it look as though it has always been there. The green, fish-scale asphalt roof and white-painted siding create a classic palette. Through the use of traditional divided-lite windows (that nevertheless have a clear lower portion for visibility), a composition that avoids a single mass, and covered porches that make windows recede beneath, the waterside presentation of Riverbend avoids the appearance of a large, glassy volume while delivering an amazing vista of the River. The old house was situated quite well, so it should come as no surprise that the new one assumes largely the same spot, to take full command of the views and the setting. 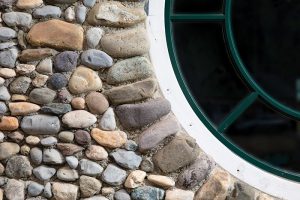 River jacks around a window.

As the design of Riverbend evolved, the approvals described above were pursued at the outset. A local civil engineer was instrumental in designing and locating the septic system, and navigating the approvals process. An area lawyer was retained to garner approval for possible future renovations to an existing boathouse that fronts the River in a location well beyond the acceptable current setbacks. At the waterfront, an existing seawall was in disrepair, and the attorney found and presented images of the wall in existence circa 1938, which made it possible to perform repairs without undue process. Application for a dock is pending. 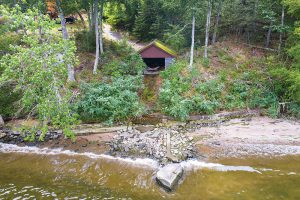 The boathouse on the property. The architect and owners secured the necessary permits to renovate at a later time. 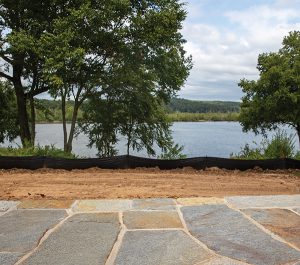 Field stone porch overlooking the Connecticut River. Note the silt fence required during construction for regulatory compliance. Also some trees were carefully removed to open the view to the river without completely exposing the bank.

The Riverbend project involved the removal of trees along the water. Working with the relevant agencies, permits were obtained for each individual tree, so there was no overall “clear cutting” of wide swaths. The driveway and parking areas were constructed of permeable-surfaced peastone to allow rain to pass through into the ground, avoiding any runoff.

The regulatory agencies associated with development along the Connecticut River appreciated the special efforts made on this project. The architect and owners elected to build smart on a sensitive location to preserve and protect the shoreline of this natural treasure.