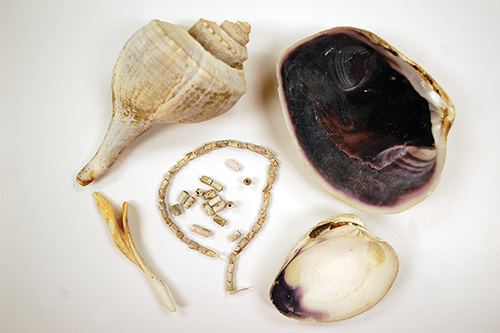 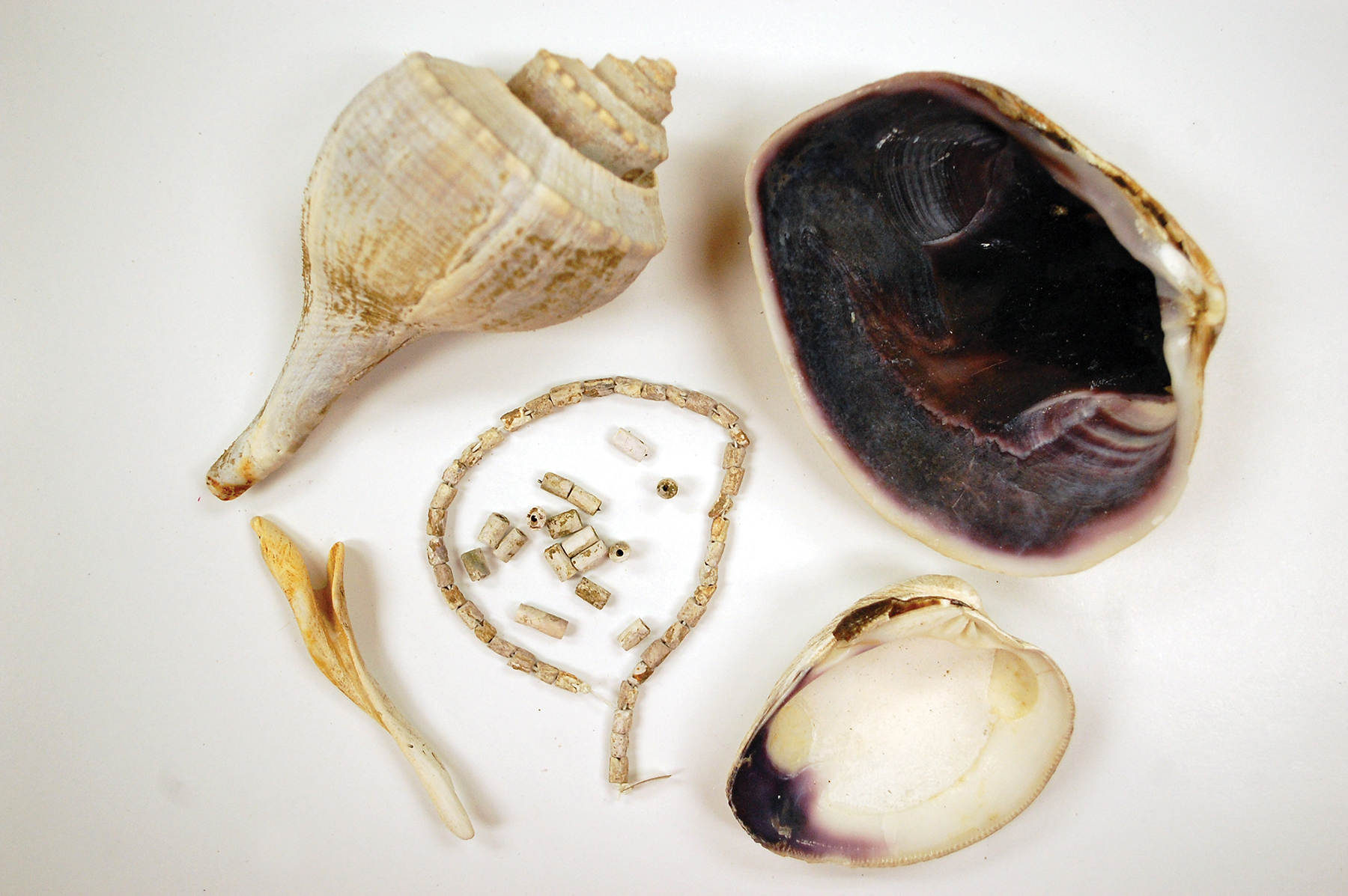 We all like to visit the beach in warm weather. We like to stick our toes in the sand, wade in the water, maybe collect a few shells. The Native Peoples of the Connecticut shore and estuaries did just that hundreds of years ago. For them, certain shellfish not only fed the body but sustained the spirit as well. Quahog clams and large whelks were of particular importance for the creation of a small bead called wampum.

Wampum was and still is a cylindrical shell bead approximately 5.5 millimeters in length and 4.0 millimeters in diameter made mostly from the shells of whelk and clam. Before contact with Europeans, this small bead was made using stone drills. This is perhaps why the white bead was made with whelk, which has a spiraled shell with a hole already formed by the animal that lived in it. Metal awls brought by traders revolutionized production, simplifying the process and increasing yield. Eventually, all beads, white and dark, were made from clam shells.

Wampum is the term inherited from New England colonists. Roger Williams, one of the first settlers among the Narragansetts of Rhode Island in the early seventeenth century, outlined the native nomenclature for shell beads. He wrote in 1643 that “Their white they call Wompam (which signifies white): their black Suckauhock (Sucki signifying black).”

Native People made a distinction not only between the color of the beads but also whether or not they were strung or loose. Peag, peague, and peake following wampum indicated that the beads were strung. European settlers in the southern colonies were quick to absorb the New England Algonkian terminology, but simplified the word to peak. The Dutch and the French developed totally different words to describe wampum. Regardless of the name, the beads came to be universally known and accepted in the network of exchange among colonists, the opposite of how Native Americans thought about wampum.

Clearly, Native Americans along most of the Atlantic Coast had knowledge of, if not use of, wampum. They used wampum for a variety of purposes, possessing it in different amounts. While its exact origins are not known, it is evident that it was present among Natives before the arrival of Europeans. Historical documents and drawings show that shells and shell beads were used as personal adornment by men, women, and children. Colored plates made following Sir Walter Raleigh’s 1585 expedition to Roanoke in Virginia show Natives wearing small, cylindrical, purple beads like those of dark-colored wampum. 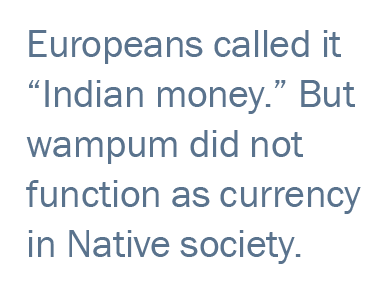 In spite of the fact that Europeans absorbed wampum into their culture and used it successfully in the fur trade, they never really understood its role among Native People. Traders quickly latched onto these shell beads as a commodity for use in a commercial enterprise, and from the very beginning, Europeans called it “Indian money.” But wampum did not function as currency in Native society. Eventually, they caught onto the market system of the European traders and acted as savvy consumers, but wampum did not become for them a commodity whose value depended on its purchasing power.

Wampum easily fit into the fur trade for the same reason that many other objects were exchanged in the early days of trading. Shell was a valued item as part of Native cosmology and ideology. White, sky blue-green, red, and black played important roles in the belief system. Natural elements of these colors, such as shell, copper, catlinite, red ochre, clay, and charcoal, were incorporated into the cosmology as symbols of the ideational function represented by the colors. White and sky blue-green were used in positive social contexts of peace and life. Red was symbolic of well-being and antisocial behavior like war. Black signified the absence of the vitality represented by the others, a sort of limbo world.

Native Americans took these objects and ideas and incorporated them into their mythology and philosophy of life and well-being. Wealth was accumulated through well-being, which was accrued through spiritually powerful relationships with the world as represented by symbols and the places and beings that bestowed the symbols upon the Natives.

Consequently, relationships of respect and reciprocity developed between Native People and the world around them. Everything in the universe possessed spiritual power, called “medicine” or “manitou.” This power can be good or bad and range in potency. Those spiritual beings with greater manitou were given greater respect, and Natives were careful to maintain a good rapport with them through appropriate reciprocal means. Hence, animals that gave their lives so that the people might have food, shelter, and clothing were highly honored for their sacrifice.

Shell fit into Native cosmology not only because of its color, but also because shell came from an animal of the “under (water) world,” a place of potent manitou. Shell was the sacred symbol of the power of the life-giving fluid. Wampum beads evolved to be an important part of Native ceremonial and ritual life as a result of the role of shell in ideology. White wampum signified light, peace, purity, tranquility, health, prosperity, faith, and renewal. It accompanied messages of peace and was held while making a public confession to reinforce the truth and sincerity of the admission, but white wampum painted red and accompanied by a tomahawk indicated hostility. Black (purple) wampum employed with the appropriate symbols could also mean a state of war existed. Black wampum was also very much a part of mourning ritual, particularly the Iroquois Condolence Ceremonial, to heal the bereaved of their sorrow and wipe away their tears. It was an integral part of the replacement ritual when a sachem died. Wampum also accompanied the dead to the other world and was part of the mortuary practices of many Native groups.

The well-established presence of wampum in Native life ways allowed Europeans a ready avenue into the fur trade. Native cosmology permitted the transubstantiation/conversion of certain trade goods into existing patterns of trade and exchange, those items Europeans called “trifles,” but wampum, already an integral part of Native culture, was the keystone because it permeated native beliefs and helped to maintain social, political, and religious structures. Consequently, it could draw the furs from the deepest forests, far distant from European settlements.

Natives revealed the importance of wampum from their first encounters with Europeans when they exchanged furs and wampum with early explorers. These were gifts to the new visitors to establish good relations and to show their good faith, as they would with Native strangers. The protocol of gift giving required a reciprocal exchange on the part of the Europeans. Native Americans maintained this high principle. Consequently, they would not accept inferior wampum because it would no longer possess powerful manitou, and its function in their cosmology would be reduced or disappear. As a result, conflict developed when traders experienced falling prices in a changing European market, which Natives did not understand. To them, wampum possessed an intrinsic symbolic value that did not change. 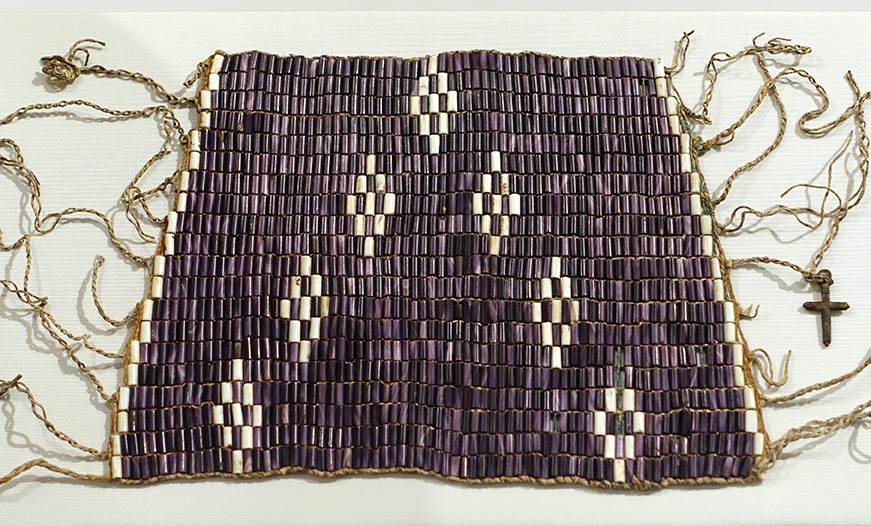 Saturating Native culture with wampum did not have the same effect as glutting the market with beaver. In fact, it had just the opposite effect. The more wampum that was available, the greater one’s well-being; and the greater one’s well-being, the greater one’s wealth. However, this wealth of well-being could not be accumulated as with Europeans. It could be displayed as ornamentation, or it could be shared with others. The more a person gave away, the more highly esteemed he would be. Consequently, a high-ranking person, such as a sachem, was often the poorest person in the group or village because he distributed his wealth among all members not just friends and family, spreading the well-being throughout the group, thus creating universal communal well-being. This idea of wealth conflicted with that of Europeans. As wampum flooded into Native society, everyone was able to benefit from the positive manitou it represented. Europeans associated the distribution of wampum throughout Native communities with the power of their money and equated wampum with money. The tendency for Europeans and historians to equate the rise in prices of beaver and other goods with the depreciation of wampum is perhaps an erroneous assumption based on non-Native values and interpretation of the function of wampum in Native culture, especially in light of the fact that they held European coin in low esteem.

It's not surprising that wampum still holds the same importance and “value” to Native People today. So much so that the Iroquois Nation pursued for centuries the return of wampum belts that marked the creation of their confederacy. It was not until the 1980s that they were finally returned by the State of New York. Native artists continue to make wampum today, many demonstrating the skill required to create this small bead—the gift of manitou from the sea. 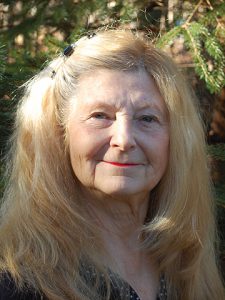