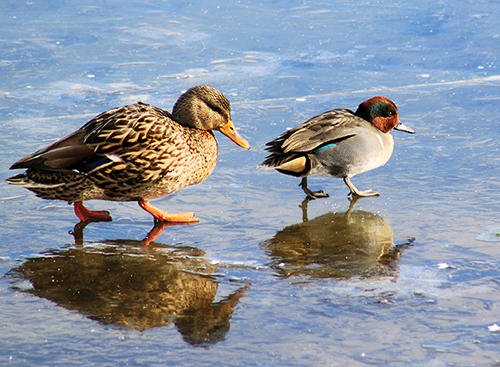 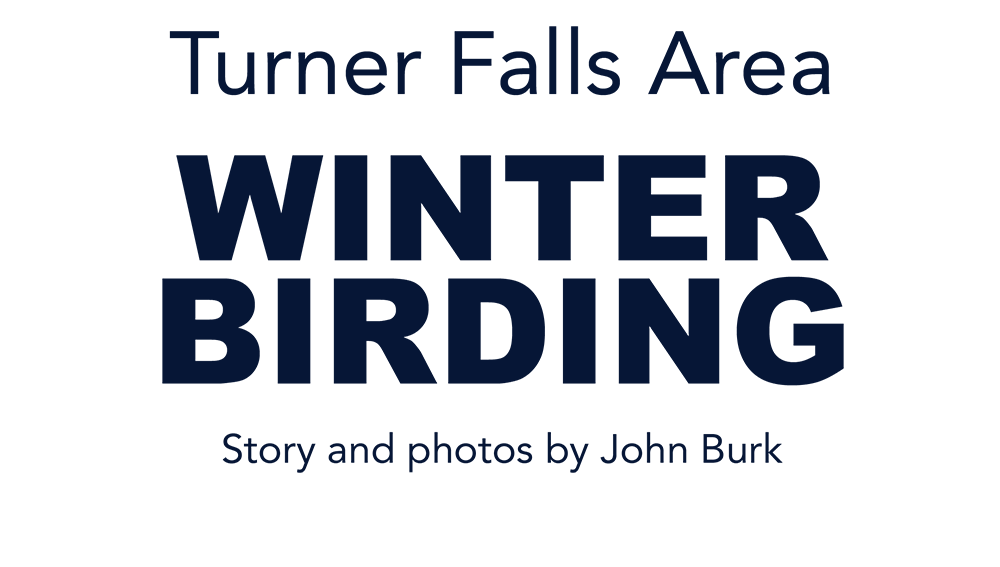 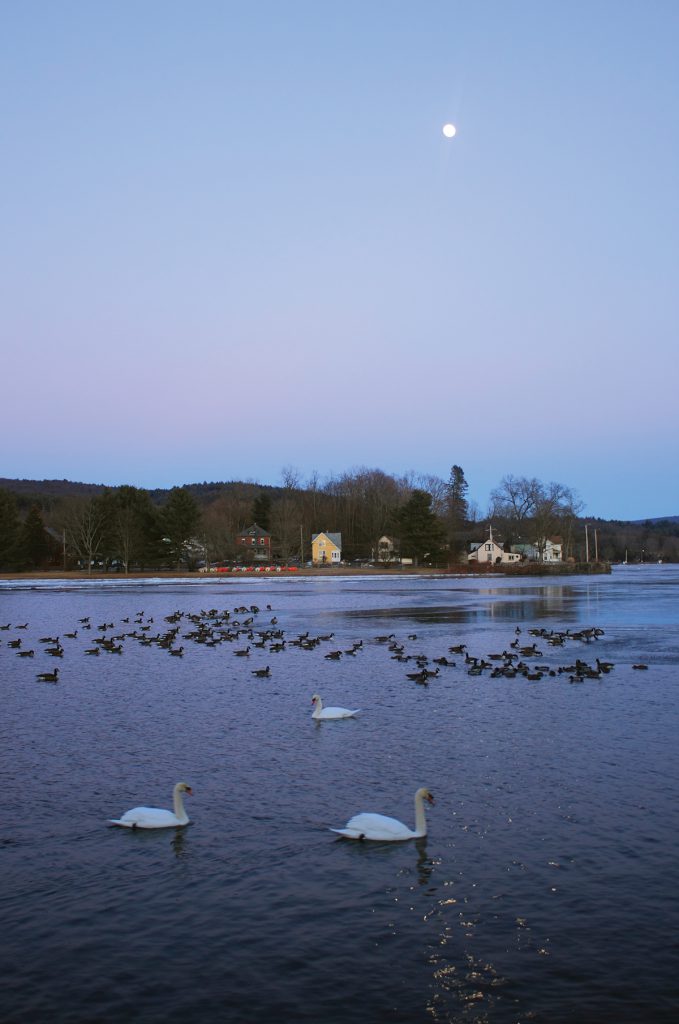 Moon over swans and geese on Barton Cove.

In March 2019, a flock of 20 tundra swans made an unexpected overnight visit to a historic canal at Turners Falls, Massachusetts, one of the Connecticut River watershed’s finest winter birding destinations. The swans, which breed in the Arctic and overwinter on the mid-Atlantic coast and other regions, delighted fortunate observers before departing the next morning.

Sightings of rare species are commonplace at Turners Falls, an industrial village in the town of Montague with a variety of attractions and features centered around the Connecticut River. In precolonial times, Native American tribes used the area as a gathering place and trade center, with bountiful harvests of salmon and shad at the rocky rapids of Great Falls. In the late 19th century, proprietors established a dam and canal network to facilitate passage by boats. After the canal closed, the infrastructure was rebuilt in 1869 to provide power for mills in one of the nation’s first industrial centers. Today the Turners Falls Dam, enlarged in 1970, is one of the hydroelectric facilities managed by First Light Power.

Picturesque Barton Cove, a broad still-water outflow above the dam, is renowned for diverse bird life and scenic views. Bald eagles established a nest on diminutive Barton Island in 1989, when the species was just beginning to recover after being extirpated from most of New England during the 20th century. This was largely due to widespread use of pesticides such as DDT. In Massachusetts, eagles were successfully restored at Quabbin Reservoir during the 1980s, and nearly 80 nesting pairs have been documented statewide as of 2020. Eagles are regularly seen stalking potential prey and soaring over downtown Turners Falls. Roughly 35 waterfowl species have been recorded at the cove, including uncommon winter visitors such as American wigeons, green-winged teal, lesser scaups, and greater white-fronted geese. A variety of gulls, including rare Iceland (or Kumlien’s), glaucous, and lesser black-backed gulls, also frequent the area. Viewing is especially productive when water is partially frozen and birds congregate in open water and along ice edges. 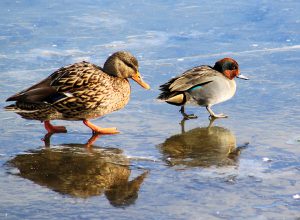 A mallard duck, left, and green winged teal, right, walk across the ice on Barton Cove in Montague, Mass.

The cove’s south shore, off Route 2 in Gill, is a finger-like peninsula of basalt bedrock where many dinosaur tracks were discovered in the 19th century. This land is also owned by First Light Power, which manages a nature trail and seasonal campground there. From the day-use entrance, where there are fine views, the trail leads to an observation platform atop a ledge before winding along outcroppings to the peninsula’s western tip. Here it meets the campground access road, which passes several partial views of the Connecticut River, where flocks of ring-necked ducks, mergansers, and common loons may be spotted. The round-trip hike is 1.7 miles with approximately 300 feet elevation gain.

On the west shores near downtown Turners Falls, Unity Park offers more open views and access to the north end of the Canalside Rail Trail, a 3.6-mile paved path linking the various historical sites and attractions. From parking areas on First Street, the trail follows the cove’s edge to the Turners Falls Dam, where short detours lead to views of rushing water and the nearby Great Falls Discovery Center, an educational visitor center with well-crafted exhibits featuring the Connecticut River watershed. 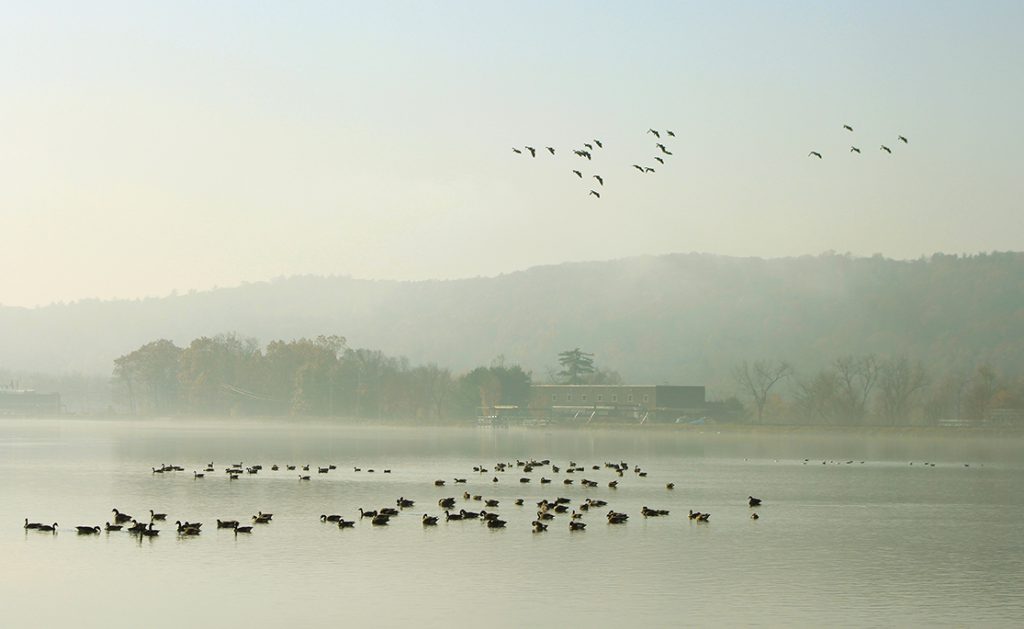 Canada geese on the power canal in Turners Falls, Mass.

Downstream from the dam, the canal extends for about two miles, passing by old brick factories and iron bridges. At its southern end is another birding hot spot, a wide reservoir near a power station. The warm, sheltered water serves as a haven for waterfowl and gulls, especially when nearby areas are frozen. Notable single-day winter observations include 4,100 Canada geese, 1,900 mallards, 800 herring gulls, and 400 common goldeneyes. Goose flocks often depart the canal around sunset, making for a striking spectacle. Snow geese, and even rarer Ross’ geese, periodically join the masses during migrations to and from Arctic breeding grounds. Scan the waterfowl flocks carefully for uncommon species such as Barrow’s goldeneyes, which are rarely seen inland. 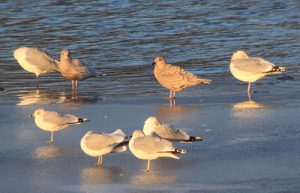 Iceland gull (Kumlien's) on the ice in Barton Cove in Montague, Mass.

This section of the canal can be explored by foot or vehicle. Migratory Way, an access road for the USGS Silvio O. Conte Anadromous Fish Research Laboratory, parallels the west side. The Canalside Trail follows the east side from an iron bridge on 11th Avenue to a trailhead off Montague City Road. Snow and ice conditions vary throughout winter, but walking is usually easy. The lighting on the birds is generally best from the east side in the morning, and from Migratory Way in the afternoon.

At the nearby confluence of the Connecticut and Deerfield rivers, a long historical railroad trestle bridge, originally built in 1880 and now part of the Canalside Trail, spans the broad crossing. The fine open views afford opportunities to see flocks of goldeneyes, mergansers, and other ducks navigating the flowing water. The bridge is easily reached from a pullout at the trail crossing on Greenfield Road, or via an easy half-mile walk from the trail’s southern trailhead on McLellan Road in Deerfield (opposite the East Deerfield Railroad Yard). 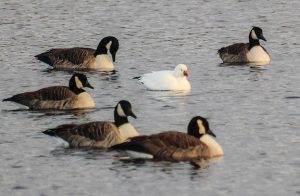 A Ross's goose among Canada geese on Barton Cove, in Montague, Mass.

On the west bank of the Connecticut River in Greenfield, Rocky Mountain, part of the Pocumtuck Range (a long, wooded ridge that stretches south to Mount Sugarloaf in Deerfield), offers habitat diversity and opportunities to see a variety of forest species such as great horned and barred owls, and dark-eyed juncos. During winter finch irruption years, watch for flocks of pine siskins and white and red-winged crossbills in hemlock groves. The town of Greenfield manages a network of trails, including a segment of the long-distance Pocumtuck Ridge Trail, which traverses the crest of the range. Poet Seat Tower at the top of Rocky Mountain offers fine scenic views.

HOW TO GET THERE

Turners Falls
To reach Turners Falls, take Interstate 91 to exit 27 in Greenfield and follow Route 2 east for 2.9 miles to the traffic light at the Turners Falls Bridge. Turn right and cross the bridge to enter downtown Turners Falls.

Barton Cove Campground
Located on Route 2A at 82 French King Highway in Gill, MA. This recreation area on a peninsula in the Connecticut River forms the southern short of Barton Cove. It is run by FirstLight Power with day use parking, campsites, and canoe and kayak rentals available seasonally.

USGS Silvio O. Conte Anadromous Fish Research Center
The research center is located at 1 Migratory Way, Turners Falls, MA. Parking is available at the entrance gate at the end of G Street and at a pullout that also provides access to the adjacent Cabot Woods and a natural rock dam on the Connecticut River. 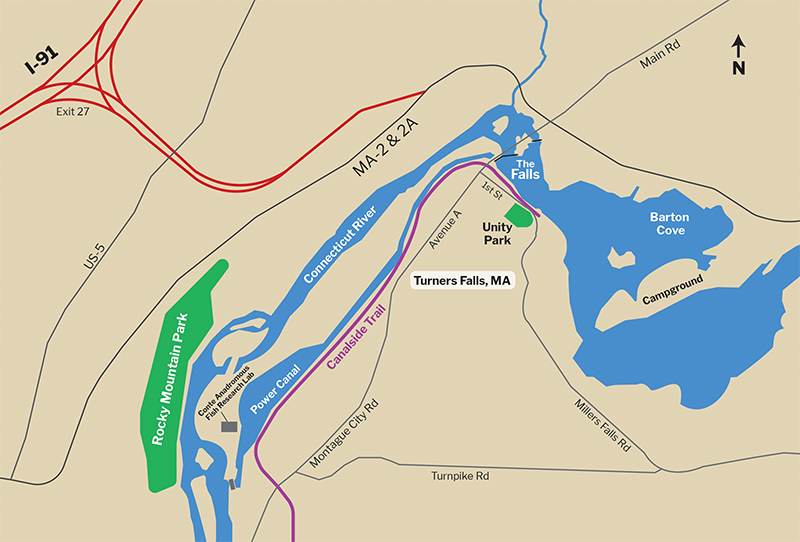 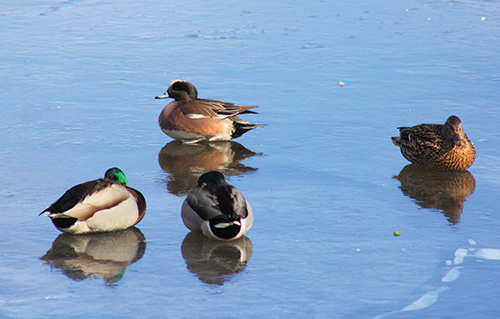 American wigeon and mallard ducks on the Ice on Barton Cove in Montague, Mass.