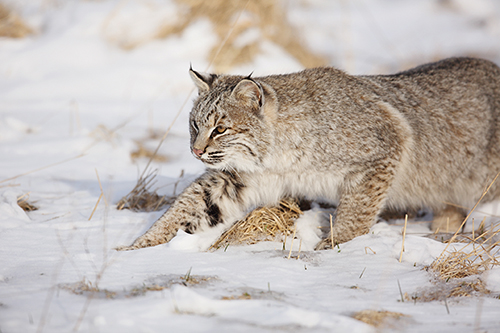 Meet the bobcat, an elusive, captivating animal that is prevalent in the Connecticut River Valley, yet one that many of us—myself included—have rarely seen in the wild. Maybe this comment explains why: “They have a behavior where if something is coming toward them (like you or me), and they don’t have time to walk out of the way, bobcats just lay down and stay still and let whatever it is walk right by them,” said Patrick Tate, a veteran wildlife biologist, who serves as furbearer project leader for the New Hampshire Fish and Game Department.

“Their camouflage works extremely well, even when they’re out in the open,” said Tate, adding, “If you put a bobcat in the woods, with the shadows and the weeds and the brush, they disappear immediately.” 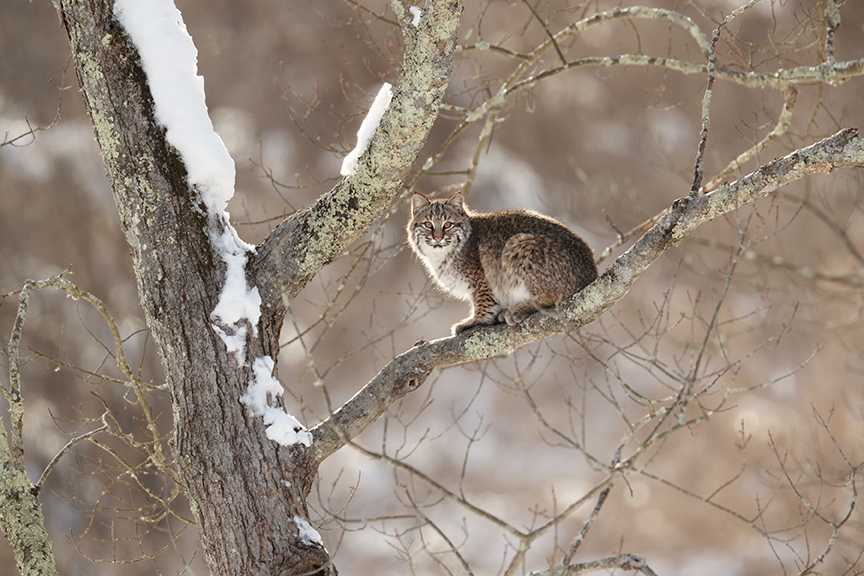 Tate is talking about an animal almost double the size of a domestic cat, cloaked in hard-to-see brown to brownish red fur, with a white underbelly, pointed ears, and a black-tipped, short, “bobbed” tail. Most measure only 26–41 inches long, weigh 13–30 pounds, and stand 21 inches high.

According to Tate, bobcats have powerful, long claws and strong jaws, enabling male bobcats, who are bigger than females, to bring down adult deer. Bobcats are also fast, maneuverable, and can change directions on a dime when pursuing preferred prey, like mice, voles, squirrels, and rabbits, Tate said.

For me, that begged the question: Are bobcats considered apex predators? 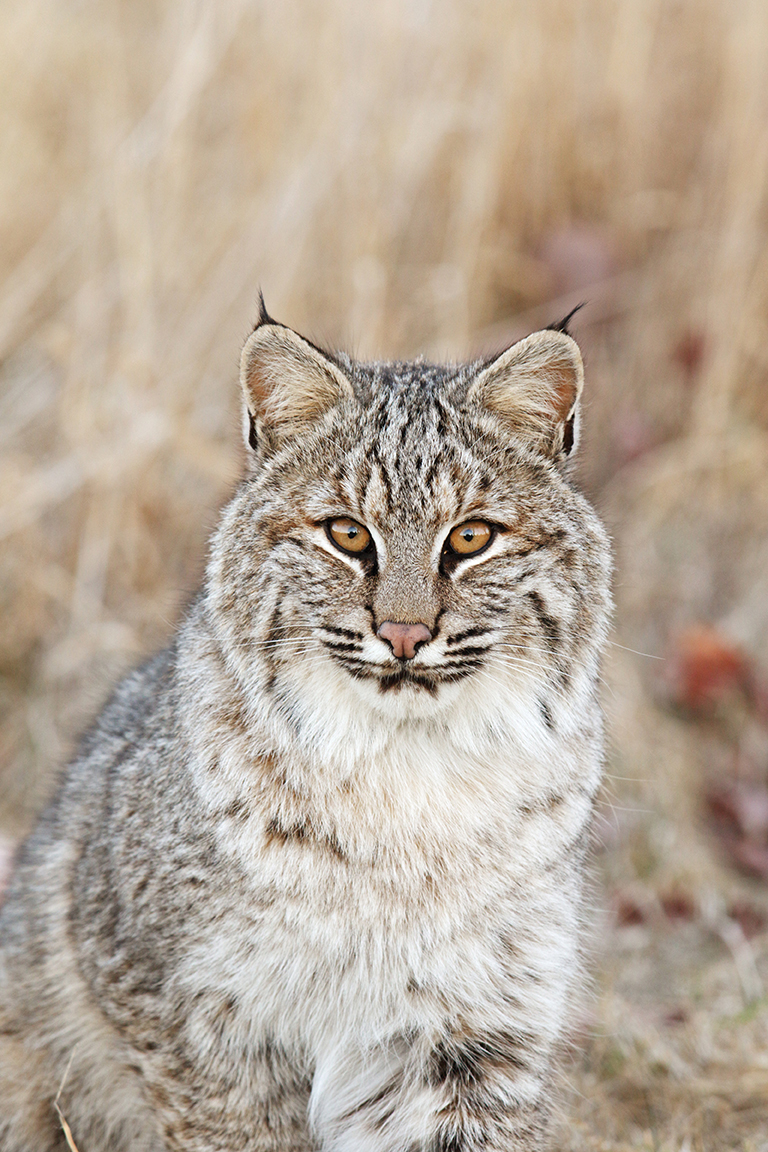 “That’s a very difficult question to answer,” Tate said, “because if you look at the definition of an apex predator, it can affect all wildlife. And the bobcat is certainly not affecting our moose or eastern coyote population.” Instead, Tate prefers to call bobcats “meso carnivores,” or medium-sized predators who eat strictly meat.

Despite their agility and hunting prowess, bobcats lead a surprisingly brief and challenging life. They live an average of 5–6 years in the wild but can live longer. “The oldest that I can recall was 13 years old,” Tate said.

Broken teeth, infections from fighting with other bobcats, and blindness, often caused by scratches or punctures sustained in these fights, take their toll on bobcats, Tate said. Road crossings are another hazard. For example, last year, 50–60 bobcats were killed by cars in New Hampshire.

“What about coyotes. Would they kill a bobcat?” I asked Tate. 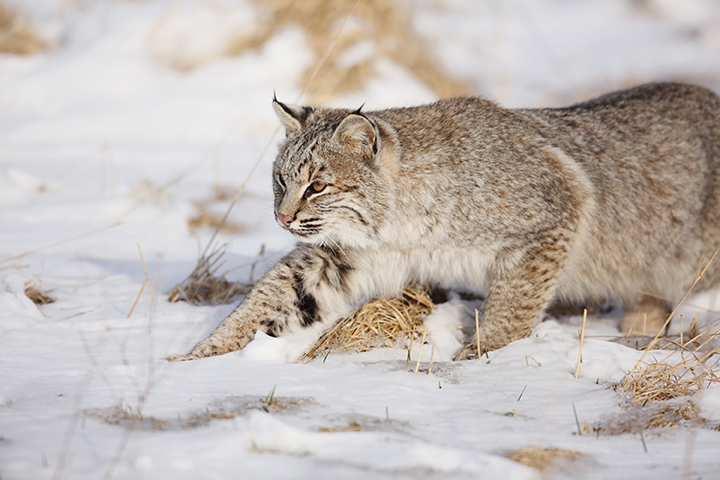 “I don’t have any evidence of eastern coyotes preying upon bobcats, and I don’t think they’d be dumb enough to do it because a bobcat has four paws with very sharp claws and a strong jaw, whereas an Eastern coyote simply has a very strong jaw. It’s not going to win that fight,” Tate said.

Currently, there are 2,400–2,800 bobcats in New Hampshire, Tate said, and the population is increasing at a whopping 15 percent. I could not verify bobcat populations in neighboring states, but an internet search revealed the following comparisons: Vermont has an estimated population of 2,500–3,000 bobcats; Massachusetts, 3,500; and Connecticut, 1500.

“Given the success we have had trapping and the good number of photos we’ve gotten in our camera detections, bobcats are more common than I had anticipated,” added Tracy Rittenhouse, associate professor at UCONN’s Department of Natural Resources and the Environment.

Finally, I asked Tate what do you do if you encounter a bobcat in your backyard or out on the trail? Here is his advice: “Give the animal space. Know that they will display what people consider ‘brazen behavior,’ simply because the bobcat thinks they are hidden. They don’t realize they’re so visible,” Tate said.

If a bobcat approaches you, which would be extremely rare, Tate said a loud, deep-based voice, sounding gruff, will help move the bobcat out of the area. “But know that they are animals that will go into the brush and slink away at a slow rate of speed because they take advantage of their camouflage.”

Tate said bobcats are attracted to people’s backyards for two reasons: first, birdfeeders, which attract chipmunks and squirrels which are favorite food items for bobcats, and second, range-free chickens may be present. “Once the bobcat finds those range-free chickens, they’ll come in and take one per day, unless the chickens are cooped,” Tate said.

Tate admits, “The number one call I receive regarding what landowners consider a nuisance is the bobcat.” But he adds, “As a biologist, I don’t want to see a very charismatic, beautiful animal become regarded as a problem animal.”

Paul Fusco has been photographing wildlife for over 30 years in the habitats of Connecticut and beyond. His background in art, design, and natural history all come together in his photographic expression of our natural world.