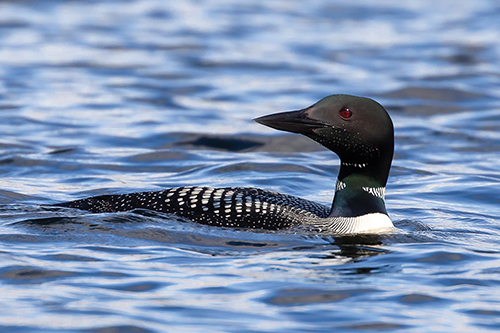 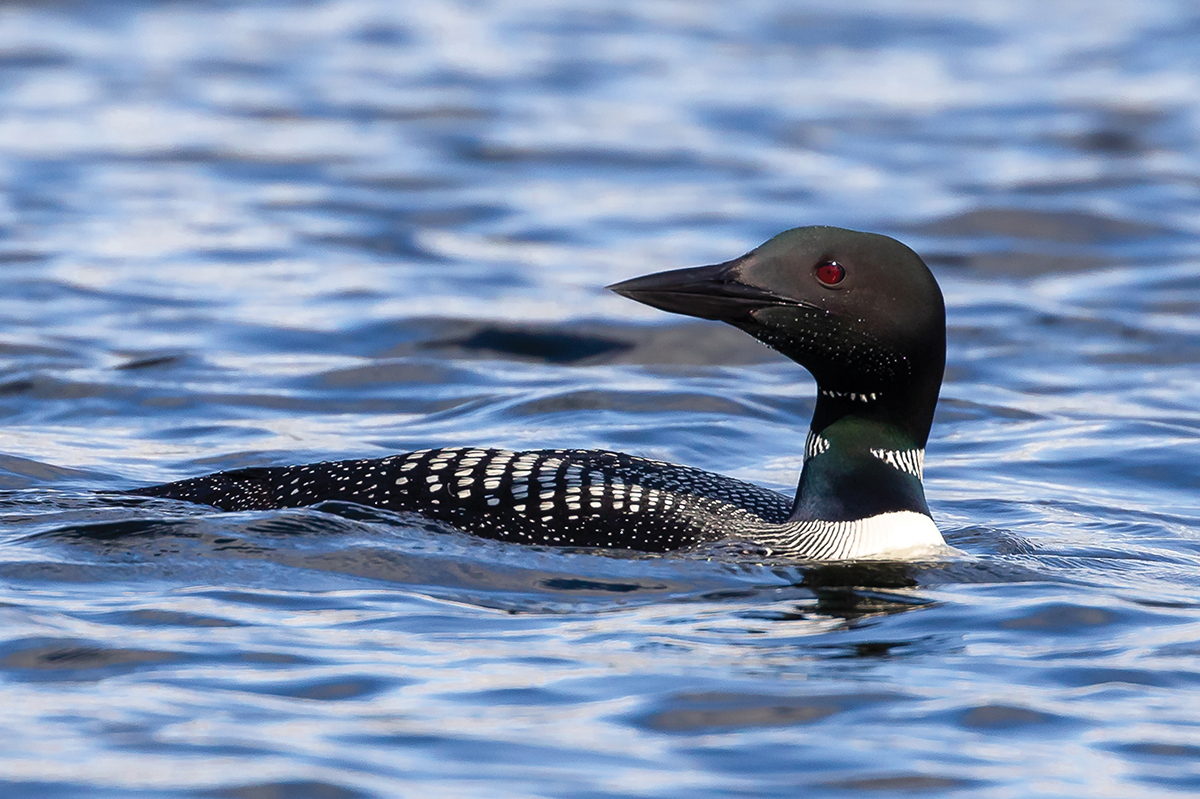 An adult common loon floats in the water on a lake in Maine. Image Credit: Christopher Zajac.

I saw my first common loon in January of 1958, at the mouth of the Connecticut River. In those days, Griswold Point was connected to the mainland. As a twelve year old, on my own, I could hike dry-shod to the point’s end and survey the River’s mouth. This was an exotic (albeit chilly) destination; an exploration quite separate from my cozy daily family life. But for the loons, it was entirely normal: they wintered there on the cold waters of the Sound, not far offshore, diving and pursuing the small fish of the estuary. Thirty years were to pass before I had a chance to study the little-known migration and winter biology of this “very unbirdlike bird.” I began in 1988 on Maryland’s lower Choptank River, where migrating loons made a long autumn stop to flock-feed on juvenile “peanut” menhaden. Over the next thirty years, at various sites, I gradually came to realize what extraordinary creatures loons are. Loon study is a constant lesson in applied physics and chemistry! 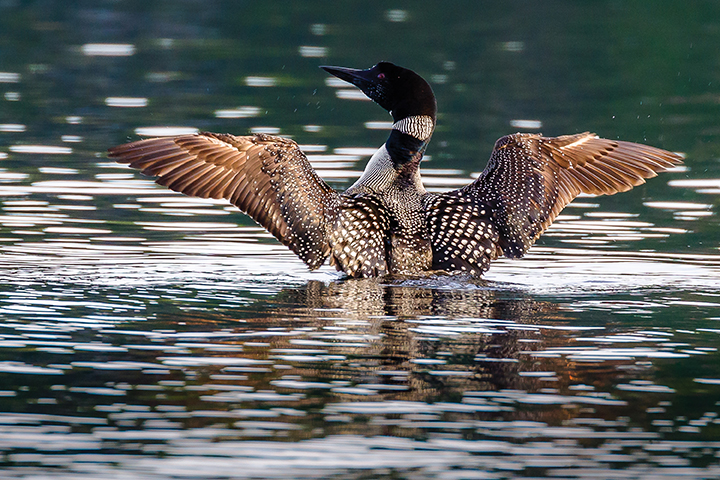 A loon in summer breeding plumage stretches its wings on a lake in Maine. Image Credit: Christopher Zajac.

Loons are among the most aquatic of all birds. After they leave the nest, the only time most healthy loons return to land is for nesting, several years later. And that nest site is at the watery edge of land, sometimes boggy, usually inaccessible, enabling a quick discreet escape to the water. Loons’ obligate waterborne life requires frequent oiling of plumage, which traps an air layer that maintains insulation from cold water and assists floatation. Within loons’ skin are oil (sebaceous) glands that constantly secrete the feathers’ waterproofing. There is also a large oil or uropygial gland that lies in body tissue just above the base of their stub tail. It is drained by a wick of specialized feathers, which they run through their bill, or rub with the back of their head. Both bill and head are then used to spread oil all over the plumage. In calm waters, their white belly shows when they roll onto their back to anoint themselves. Studies estimate that about 10 percent of the day, thus six minutes of every hour, are devoted to this plumage maintenance. To us it may seem like living in a leaky boat, but for loons it quickly becomes second nature. In underwater pictures, loons become slimmer, streamlined creatures, as water pressure compresses the air layer underneath their body feathers. Alas, this marvelous arrangement also means extreme vulnerability to oil spills, which collapse their close-feathered “wetsuit.” Oiled loons can then die of exposure.

Loons’ many physical specializations give them comfortable access to a range of winter habitats unequaled in our bird world, from interior freshwater lakes out to continental shelf waters sixty miles offshore. The latter implies storm hardiness. Breathing between wave crests is doubtless second nature. Dr. Kevin Kenow of USGS (United States Geological Survey) has attached pressure sensors that demonstrate optional diving capacity to 150 feet, when Great Lakes feeding makes that necessary. Add to this the diverse freshwater lake stopovers that loons make on migration, and the huge northern range of lakes and ponds they use for breeding, and loons can fairly be called “Water Masters.” The British name “Great Northern Diver” gets at it—loons are goose-sized; they breed only in northern habitats; and yes, they can dive deep.

The loon’s life history—salt water, fresh water, underwater, aerial, and migratory—challenges our landbound imaginations. I am reminded of Henry Beston’s famous cautionary quote: “…the animal shall not be measured by man. In a world older and more complete than ours, they move finished and complete, gifted with extensions of the senses we have lost or never attained, living by voices we shall never hear.…They are other nations, caught with ourselves in the net of life and time, fellow prisoners of the splendor and travail of the earth.” 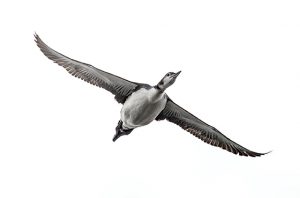 Flying loon in nonbreeding plumage. Note its feet are turned and pressed together as an aerial rudder and stabilizer, a "flight control device." Image Credit: Amber Hart (flying loon).

For many reasons, I consider loons triumphs of evolution—but they have paid a price for these specializations. Their paddle feet, their sole means of underwater propulsion, are the size of a small human hand. Unlike ducks and geese, these feet are very far back on the body, so loons cannot stand or walk. Thus they have extremely limited “push-along” mobility on land. They require a watery landing strip, which must be quite long to enable their subsequent labored takeoff—an extended taxi to get that weighty body back into the air. Their flight is powerful, three wingstrokes per second, but not buoyant. Their wings are slender compared to those of a wild goose, which has a similar weight. With such heavy wing-loading, they must fly fast, or fall. And yet large numbers of loons traverse the continent’s interior twice a year. They have a broad North American distribution, limited by winter ice on the northern end and heat on the southern end. This loon nation succeeds by using water sites and seasons where man’s presence is either limited or respectful. They are long-lived, potentially healthy into their twenties, slow to mature (given the challenges of learning to be a loon), and when they achieve breeding, they produce at most one or two young each season. To succeed in this beautifully specialized body requires loon intelligence—which might sound like an oxymoron, but clearly is not. Part of my thirty-year fascination has been a quest to learn the nature of that powerfully adaptive non-human intelligence.

Common loons’ biology in Connecticut is an incomplete story: an invitation for the curious coastal naturalist. For example, in a recent year, I visited Griswold Point on the first of November and observed several newly arrived migrant loons feeding together close to shore, in the surf. Such wave action tosses little prey fish around, leaving them less aware of the diving loon, and vulnerable as prey. This poses the question of whether autumn loons on Long Island Sound may flock-feed on locally produced schooling “peanut” menhaden—as I have found them to do very commonly on Chesapeake Bay. 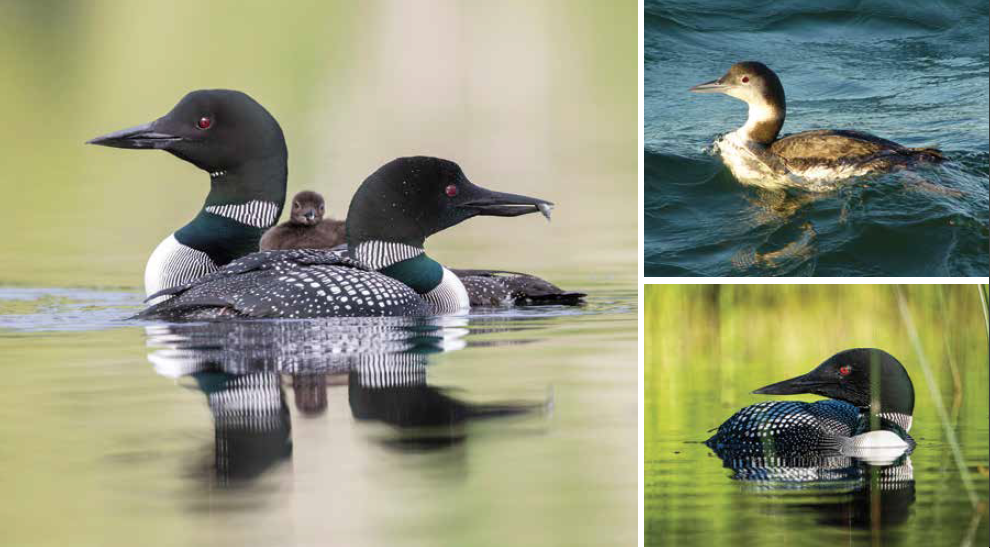 In winter and spring, two different forms of the Common Loon occur in Connecticut, and they offer a lesson of “Physics in Nature.” The loons wintering on the Connecticut coast are big-bodied, heavy loons that can take the cold. They breed locally in northern New England, and probably maritime Canada. Their heavy wing-loading works because they are short-haul migrants. In contrast, the loons that migrate through in spring come from a separate population of lighter, smaller birds, fledged in Minnesota, Wisconsin, Michigan, and interior Canada. Research has found they are non-breeding subadults, headed for summer on northern salt waters from New Hampshire to the Gulf of St. Lawrence. Thus, they are long-haul migrants, which have migrated south across the continent to winter on the Gulf of Mexico and the southern Atlantic coast. Being smaller and lighter, they are adapted to winter on those warmer waters—and they have the lighter wing-loading that is essential for their long overland cross-continent flights. But for their first few nonbreeding years, they migrate north in spring up the Atlantic coast, thus avoiding the extreme aggression of territorial adults breeding on interior northern freshwater lakes.

Here again, there is more for Connecticut watchers to learn. On May mornings in Lyme and Salem, I have seen and heard some of these loons headed east-northeast—presumably taking a short cut to the Atlantic north of Boston. But the extent of this flyway is unknown. Sometimes there are hundred-loon “fallouts” at the large, strategically located Wachusett Reservoir in eastern Massachusetts. However, other northbound loons continue due east along the coast, some until they reach Buzzards Bay, Massachusetts. On the morning of May 6, 2017, I was again at Griswold Point, leading the first outing of the Connecticut Audubon Roger Tory Peterson Center’s new “ecological exploration” field program. The previous day, gale-force winds whipped Long Island Sound to a froth. Then on our two-hour morning watch we saw sixty plus loons headed east-southeast from the Connecticut River, apparently returning to their eastern coastal migration path after taking refuge from the storm somewhere upriver. So in late April and May, keep an eye and ear out for these migrating loons. When airborne, they may make their famous “tremolo” (laugh) call to stay in contact. In forested Connecticut, you might only hear their laughing overland passage. 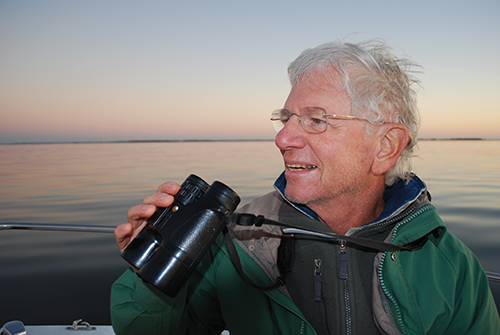 Paul Spitzer lived in the Connecticut River Valley during his formative years as a naturalist and ecologist. He was a protégé of Roger and Barbara Peterson. He began his Osprey–DDT research as a senior at Wesleyan University. He continued his doctoral research on northeastern osprey population biology at Cornell. He pursued conservation biology projects on endangered Siberian cranes wintering in India; monarch butterflies in Mexico; endangered kakapo parrots in New Zealand; and raptors in India, with the Bombay Natural History Society. He returned to the Connecticut River Valley to document the successful osprey colony’s dependence on migratory Atlantic Menhaden, thus completing 50 years of intermittent osprey conservation biology. Along the way and over a 30-year period, he also studied the migration and winter ecology of the Common Loon on all three North American coasts. “Over a lifetime, certain species and study areas have become my ‘field laboratories.’” Spitzer says it was a privilege to be engaged in such long, detailed study of ospreys and common loons—“two fabulous creatures that are easy to share with the public.” He is currently seeking a publisher and editor for his loon book.