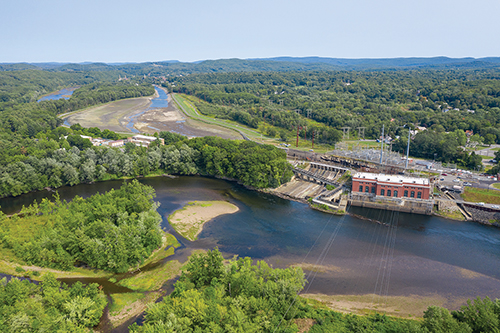 Subscribe Today
To our readers: We are publishing two articles about the hydropower industry in this issue of Estuary. The first offers an overview of, or a peek at, the hydropower industry, an important but largely behind-the-scenes stakeholder in the Connecticut River watershed. Prior to 9/11, it was possible for the general public to visit these facilities, but with few exceptions, that is no longer possible. The second article discusses the current status of several power plants now reapplying for licenses, which last 40 years; this article focuses on the environmental impact of the dams. Relicensing will be a matter for public comment during 2021. For their generous time over the phone and the photographs that accompany these articles, we are grateful to Len Greene, Director of Government Affairs & Communications, and his colleague, Carter Wall, at First Light Power Company. We also thank Kate Sullivan Craven, Director of Marketing and Communications, and her colleagues, James Lavelle and Paul Ducheney, at Holyoke Gas & Electric (HG&E).
Hydropower
of the Connecticut River Watershed
An Overview by Dick Shriver 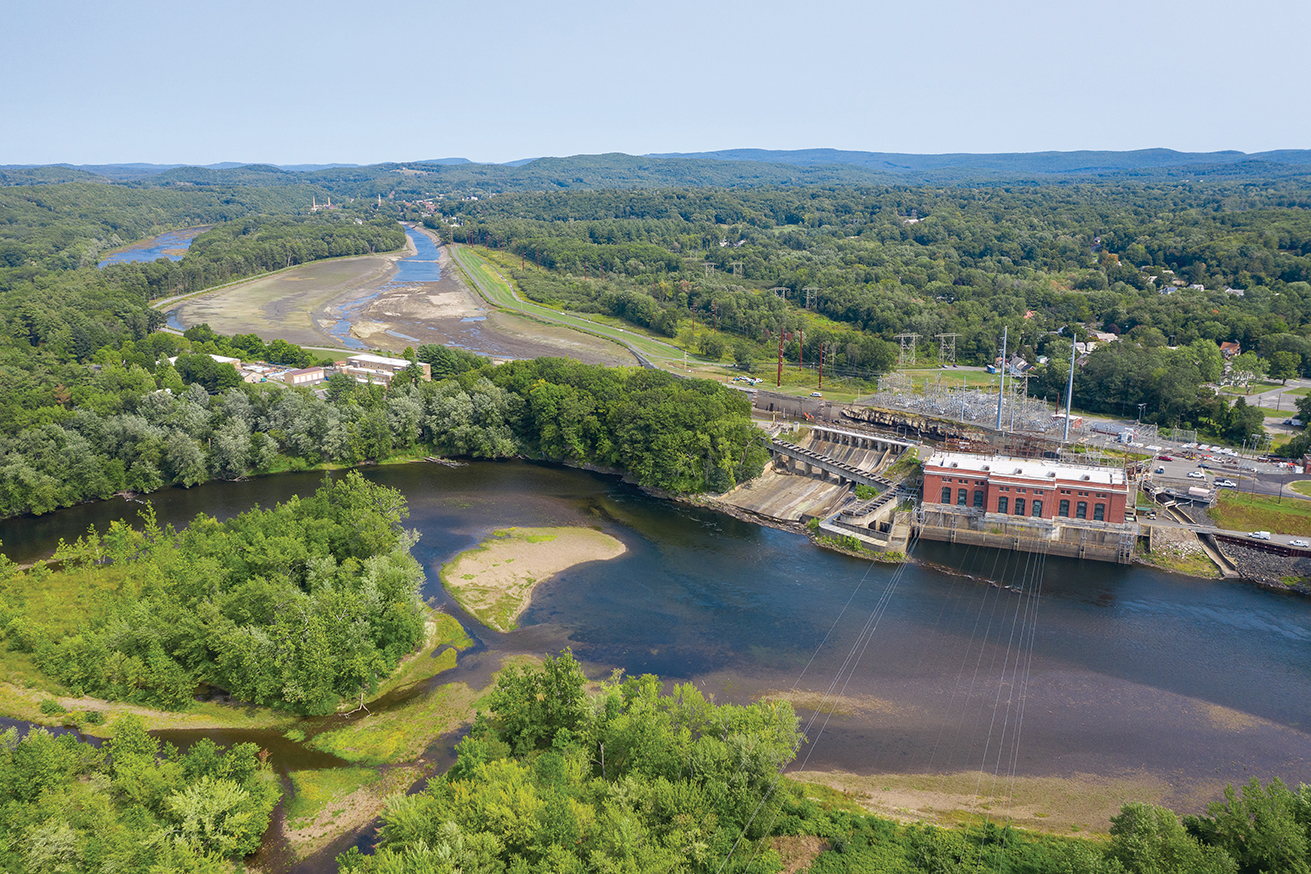 The Cabot Station powerhouse is next to the Connecticut River with the drawn down power canal extending behind it. The fish ladder is built over the spillway adjacent to the powerhouse. (Photo by Christopher Zajac.)

No one would, or possibly could, build a hydro dam in the Connecticut River valley today…and that seems even less likely to happen at any time in the future. Many of those dams that were built a hundred years ago, however, for whatever purpose at the time, based on whatever economics, and independent of modern-day environmental considerations, are still functioning productively, providing renewable energy with zero carbon emissions. 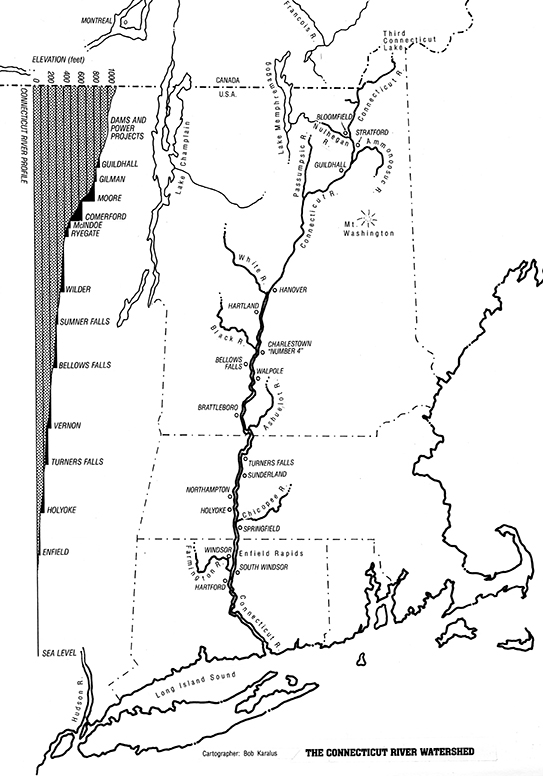 There are sixteen large dams along the main stem of the Connecticut River, most of them with hydropower plants. If one takes into account the entire watershed with tributaries, there are more than a hundred small hydropower plants. Those plants that produce electricity have the capacity to generate a combined maximum of 470 megawatts.

And so, you ask, “How much is that?” Well, it’s either a lot or a little, depending upon your frame of reference. And, what’s a megawatt? We realize that not everyone is interested in such comparisons, calculations, and equivalencies; if that’s you, simply skip the following three paragraphs.

Left: Historical photo showing the inside of the Cabot Station powerhouse in 1916. Right: The Cabot Station at the end of the power canal along the Connecticut River in Montague, MA, houses six generators for a total generating capacity of 62 megawatts.

Start with something we can all relate to: our monthly electric bill. The average household in the Connecticut River Valley pays about $120 per month for electricity. The electric meter on the average home reads 700 kilowatts consumed during the month, and is charged at the rate of about $.17 per kilowatt hour (700 x .17 = $120). In one year, therefore, the average home in the watershed consumes about 8400 kilowatt-hours (700 x 12). Since one megawatt is simply 1,000 kilowatts, all of the hydropower in the Connecticut River watershed can provide, at maximum, (bear with me on this): 470 megawatts times 8760 (24 hours per day times 365 days per year) hours per year divided by 8400 kilowatt-hours per home per year equals the electricity needs of 490,000 homes.

In terms of fossil fuels, 470 megawatts translates into the equivalent carbon-based energy of a modest 6,000 barrel per day oil refinery. Again, since the system operates at effectively half maximum capacity, the estimated savings are some one million barrels of oil per year (6000 x 365 / 2) that needn’t be pumped from the ground. This, in turn, translates to a savings, through use of hydropower, of a half million tons of carbon dioxide per year (yes, air has weight just like we do). Okay, that’s it for the heavy calculations.

The potential power of a hydro plant is determined by the amount of water involved, and how far it falls. (One of the best explanations of hydropower can be found at the Granite State Hydropower Association website; click on “How hydro works.”) The map on the previous page shows the location of the dams along the Connecticut River and their height; the dams upriver (note the heights of the Moore and Comerford dams versus the much lower Holyoke dam) are generally higher, but there is less water going over them.

According to Holyoke Gas & Electric (HG&E), the hydroelectric generating utilities of the Holyoke Dam and the Holyoke Canal System have a capacity of 50 megawatts, providing approximately 55% of Holyoke’s retail electrical load annually. HG&E is a municipal utility, so those benefits are offered directly to their customers in Holyoke.

More than a savings to the environment, hydropower offers important advantages to the power industry, such as flexibility for emergencies, and even storage of power for a period of time. This is the case, for example, with the Northfield Mountain pumped hydro system in Northfield, Massachusetts. Built in 1964 as a companion to the Vermont Yankee Nuclear Power Plant, the Northfield pumped hydro system still has value even though the atomic plant has since been shut down. Pumped hydro is a process whereby water is pumped uphill and stored in a reservoir when electricity is plentiful and cheap (say, during the lower-demand daylight hours), and then allowed to flow back down and drive the turbines when electricity is in high demand, and the price is correspondingly high (say, at night when people turn on the lights). The Northfield pumped hydro facility, with a generating capacity of 1,143 megawatts, was, when new, the largest such facility in the world. This plant can only generate electricity while the water in the reservoir lasts, which is only for a few hours per day; so it is “turned on” when the price during the day is right. Actual production is a modest fraction of its maximum capacity.

Oddly, this facility actually consumes more energy than it creates. It is still operating because it makes money when the cost of electricity to pump water uphill is less than the value of electricity that is sold when that same volume of water runs downhill, powering the turbines. A purely hypothetical case: Let’s say it cost $10,000 to run the turbines backwards and pump water uphill into a reservoir all morning long (the buying cycle) when the cost of buying electricity from the grid is, say, 10 cents per kilowatt-hour. Then, in the afternoon and evening (the selling cycle), that same volume of water is allowed to run back downhill to drive the turbines and send electricity back into the grid at, say, a price of 20 cents per kilowatt-hour, with total revenue of $20,000. The gross profit for this particular day is therefore $10,000. However, since no part of this system can work at 100% efficiency, this profit was derived by the plant consuming more energy during the buying cycle (energy in the form of kilowatts, not dollars) than it generated (again, as measured in kilowatts) during the selling cycle.

Wind and solar power are, of course, at their peaks when weather and time of day dictate, which rarely corresponds to when consumer demand for electricity rises and falls. Thus, when wind and solar are producing at their maximums, the power company may be able to purchase electricity from the grid at less-than-maximum prices to pump water uphill, and when the wind dies down, and the sun goes down or behind cloud cover, the company may be able to reverse the flow through the turbines and sell electricity back into the grid at a profit. In this way, a pumped hydro facility can help justify investments in solar and wind by “storing” the electricity generated or bought during the cycle of maximum generation or supply, and then releasing or selling it during the next cycle of maximum demand.

About the grid. This mysterious entity, like the Wizard of Oz behind the curtain, is, in the case of New England, operated by a non-profit called ISO New England. Authorized by the federal government, ISO operates the high voltage system throughout the region and runs and regulates three markets for buying and selling electricity at the market price at any given instant.

Unfortunately, and this is doubtless a problem that was downplayed or little recognized at the time they were constructed, the dams are an impediment to fish trying to get upstream to their historic spawning grounds. The dams also impact (generally adversely) the habitat for other important animal species such as eels and lamprey. The impact of the dams on fish and other wildlife is a highly relevant topic for five of the major dams; the owners are currently applying to the US government to relicense their operations for the next forty years.

In addition to the dams and power stations, the hydropower companies also own vast tracts of property that include forests, farms, and flood plains, and reservoirs that extend behind the dams for many miles. In varying degrees, the hydropower companies make these properties accessible to the public in the form of campgrounds, hiking trails, and boating areas. Such sites below the dams may be subject to sudden changes in the water levels as the plants open and close the gates, which, where possible, is done in coordination with recreational interests.

Each spring, HG&E welcomes 10,000 visitors to its Robert Barrett Fishway and Visitor Center. The center is designed to show HG&E’s commitment to local, renewable energy generation and the steps taken over the years to protect the environment.

From the standpoint of the public good, hydropower in the Connecticut River Valley is clearly complex. What is clear, however, is that the more the general public understands about hydropower, the more attention will be paid to the multitude of stakeholder interests. 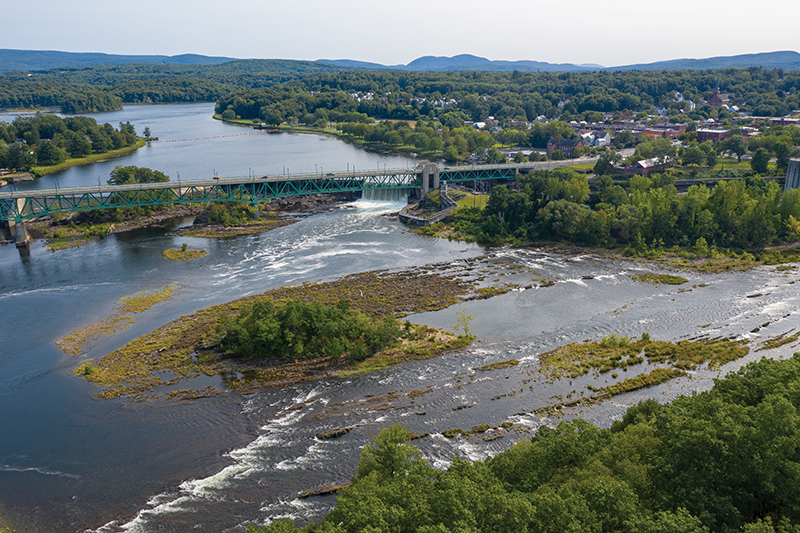 The Turners Falls-Gill Bridge crosses the Connecticut River over Turners Falls Dam in Massachusetts. Water is diverted into the power canal (under the bridge at right) through Number One Station and 2.1 miles down the canal exits at Cabot Station. Photo by Christopher Zajac.