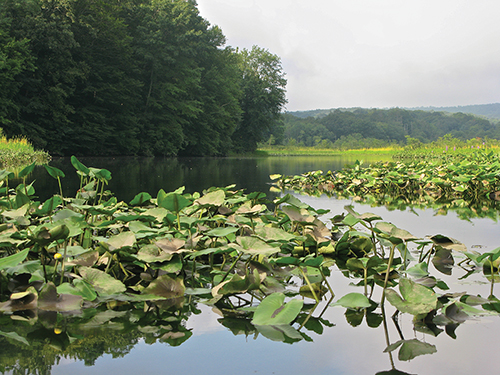 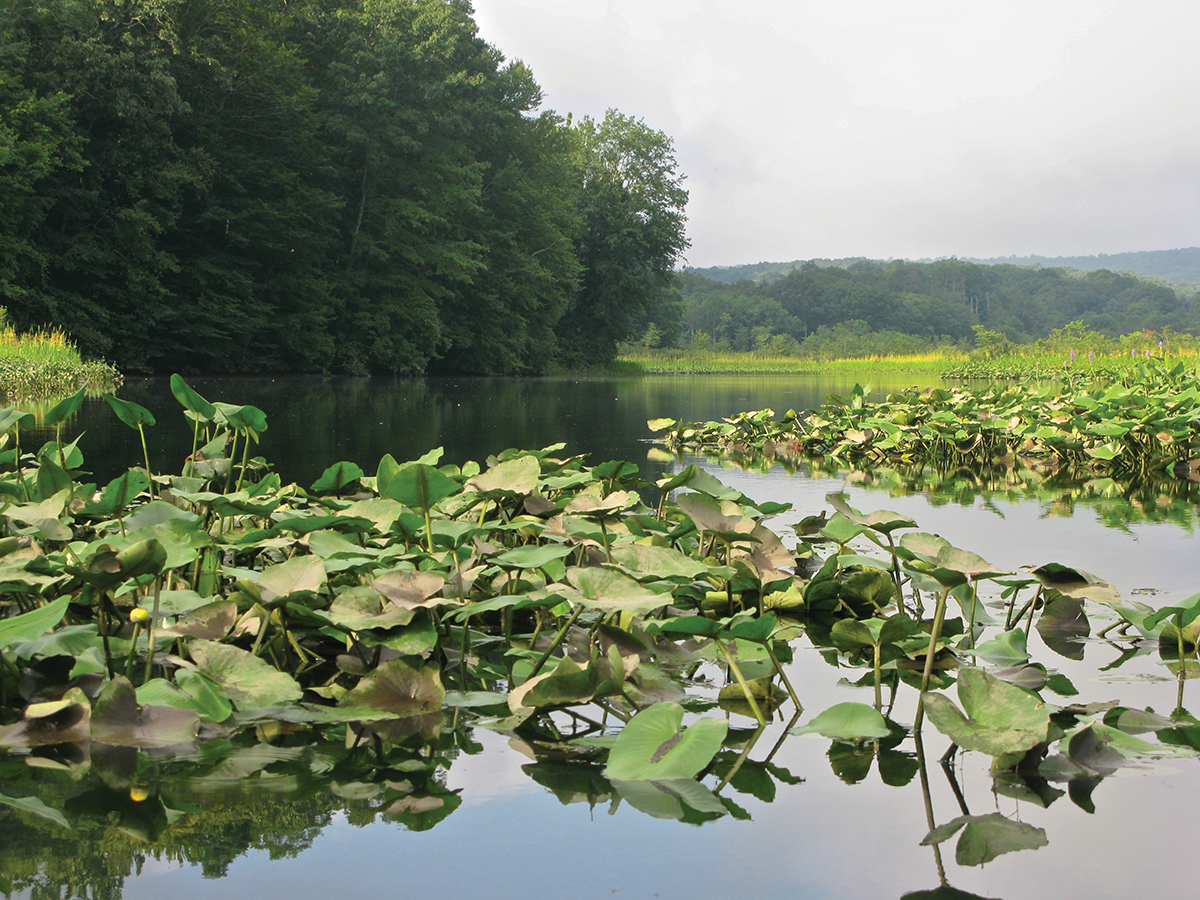 Thick growths of bullhead pond-lily, Nuphar variegate, with some pickerel weed, Pontederia cordata, scattered throughout make for a scenic view of Chester Creek, one of the many tidal wetlands along the lower Connecticut River. Thick mats of Hydrilla (note the inset photo) may grow earlier in the season and would potentially crowd out the native plants growing in the water column. Chester Creek is one of many tidal wetlands that help define what makes this place special and worth protecting. 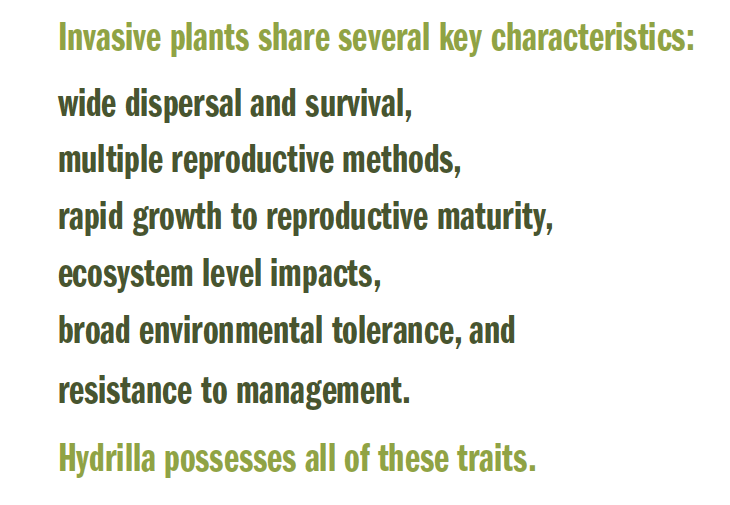 By now, knowledge that invasive plants are bad news is pretty widespread. Numerous articles and agencies cite “billions of dollars” in damages annually to agriculture and fisheries; they are the “leading cause” of population decline and extinction in animals. Once established, invasive plants can seriously disrupt the natural communities and ecological processes that define the places we love—like the Connecticut River Estuary.

The arrival of the aquatic plant Hydrilla verticillata (also known as waterthyme) to the estuary was without fanfare. In fact, it has established itself so quickly and to such an alarming extent that it has taken those familiar with local coves and tributaries—and the conservation community—by surprise. 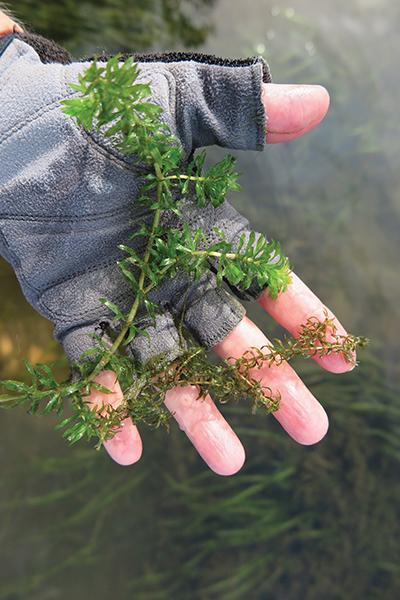 Fragments that contain as little as a single whorl of leaves are capable of drifting to other parts of a waterbody and starting a new colony. Hydrilla verticillata, also known as waterthyme, (top left) and the native waterweed (Elodea Canadensis).

Hydrilla was first found in the state of Connecticut in 1989 in a pond in Mystic; it was the first authenticated record of this plant, and the most northern locality known in eastern North America. When it arrived in the Connecticut River watershed is less clear, although the Connecticut River Conservancy sounded the alarm in 2018 with the observation of mats of Hydrilla in the Middletown area.

The concern over Hydrilla is well founded—there’s a reason why it takes its name from the nine-headed serpent from Greek mythology, Hydra. Once established, this perennial plant is known to completely displace native submerged plant communities. Hydrilla can alter fish populations, cause shifts in plankton communities, and affect water chemistry. Perhaps most insidious, Hydrilla, although generally growing from fleshy roots called tubors, is also capable of existing as a free-floating mat at the surface, and because the stems are easily broken off, they will float and establish downstream (and come back in with the tide). As if this were not enough, Hydrilla also produces reproductive buds at the base of branching stems, called turions. Both turions and tubors can remain dormant in undisturbed sediment for over four years—and can even survive “ingestion and regurgitation by waterfowl” according to one account. Stems of Hydrilla have been known to grow up to thirty feet long; they require very little light to succeed. It’s not difficult to see why the first discovery of this plant in the state raised concern. 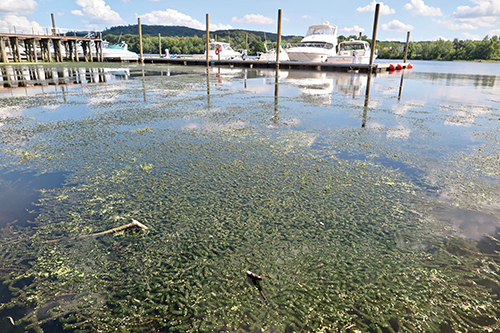 Hydrilla has captured the attention of marina owners and recreational boaters concerned about the potential diminishment of the River’s recreational value. Pictured: Portland Boat Works.

Hydrilla grows completely submerged in the water. It has small, bright green pointed leaves that circle the stem in groups of five (generally) with serrated edges and one or more sharp “tooth-like” points under the center of the leaf. Hydrilla also tends to be stiffer than the native lookalike American Waterweed (Elodea Canadensis) and capable of maintaining its shape out of water.

How did it get here?
Hydrilla originated in Asia (India, Sri Lanka, Korea); today it is found on every continent except Antarctica. It was first discovered in the United States in the 1960s from two separate locations in Florida; it is documented in thirty states now, many in the southeast, but also four western states. It is likely that Hydrilla was intentionally brought to the states as an aquarium plant. Its introduction to natural waterways was assured once the goldfish died and the aquarium contents were emptied into a local waterway. Today this plant has many vectors for movement: attached to boats, trailers, recreational gear, in the treads of vehicles and machinery, and even on pet fur.

We Should be Worried
Knowing how robust this plant is, and that the Army Corp of Engineers has called it “the almost perfect weed,” it’s a good idea to sit up and take notice. The US Fish and Wildlife Service refers to it as “the world’s worst invasive aquatic plant.”

The Connecticut River Estuary region has received multiple environmental designations—state, federal, even global—that acknowledge its remarkably intact coves and embayments and system of healthy salt, brackish, and freshwater tidal marshes. The estuary is home to an extraordinary diversity of plants and animals. One of the lesser known drivers of this healthy aquatic ecosystem is the diversity of native submerged aquatic vegetation that provides food, refuge, and an oxygenated water column for many species—insects, fish, shellfish among them, that feed a multitude of other, more familiar species such as the iconic osprey and great egret. 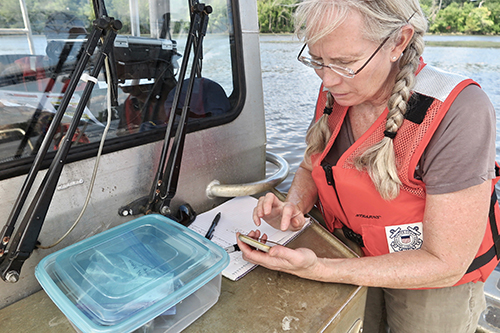 Margot Burns, Environmental Planner with the Lower Connecticut River Council of Governments (RiverCOG) collects and tracts the location of Hydrilla samples to send for genetic testing. Transportation was provided by the Coast Guard, who maintains navigational buoys—including removal of fouling vegetation—in the Connecticut River.

Loss and replacement of these diverse underwater habitats not only threatens the myriad life in the estuary—it stands to threaten livelihoods and property values. Greg Bugbee, Associate Scientist with the Invasive Aquatic Plant Program at the Connecticut Agricultural Experiment Station (CAES) in New Haven, has worked with colleague Summer Stebbins on a two-year survey of the southern portion of the Connecticut River, mapping Hydrilla and other invasive aquatic plants. He has begun to field calls from marina owners who are worried about the impact on their businesses and the recreational value of the River. At least one of the local marinas has already lost business because of Hydrilla concentrations. As scenic coves and inlets begin to show signs of dense floating mats, homeowners of expensive (and tax generating) shoreline real estate may also sound the alarm.

What Can and is Being Done
In 2018 the Connecticut River Watershed Hydrilla Task Force was formed through the Northeast Aquatic Nuisance Species program (NEANS). This initiative corralled state and federal agencies and non-profits from five states—no small task, despite the relatively small geographic size of New England. A draft management plan has been generated, and a computer-driven dialogue has informed field work and helped zero in on where Hydrilla is prevalent in the watershed, namely in southern Massachusetts and Connecticut. Momentum has been impacted by the COVID-19 pandemic, but the roots of collaboration have been established.

The CAES survey in the lower River was initiated in 2019 through the efforts and funding of the Lower Connecticut River Valley Council of Governments (RiverCOG), the Connecticut River Gateway Commission, and Connecticut Resource Conservation and Development (RC&D). Plant samples collected in 2019 were sent to the University of Wisconsin for DNA analysis, which identified the Connecticut River plants as being genetically more similar to Hydrilla from Japan and Korea than what has previously been collected in the US, suggesting that the plants in the Connecticut River “might represent a significant new genotype for the USA.” While interesting, it’s not clear at this point what this means for any effort to control Hydrilla in the estuary. During the 2019 survey, it was noted that of the Hydrilla plants recovered, none appeared to have the characteristic tubor rooted in the sediment—perhaps good from the perspective of possessing one less means to reproduce?

The quest for a solution to the growing Hydrilla challenge in the estuary will be informed by actions taken elsewhere in the nation, and brought to light, in part, through the Hydrilla Task Force and the effort to survey the lower River. Tools include hand pulling, dredging, suction harvesting, use of floating booms and benthic mats, and biological control that includes snails, leaf-mining flies, and tuber-feeding weevils. None of these tools is without risk, and most can be expensive.

Persistence
As discouraging as this may seem, it is not the first time (nor will it be the last) that the estuary has been under siege. That this place has persisted through time, halfway between the urban centers of New York and Boston, is remarkable. We want to keep it that way.

Admittedly, Hydrilla—the nine-headed serpent—appears to be a formidable foe. But already, local individuals and organizations are rallying, and we’ve never had as much access to information and technology as we have today. If you want to help, remember that it only takes a one-inch fragment of Hydrilla to begin a new infestation: clean your boat—and your clothing, and your pet—before leaving the River. And tell others. The estuary is counting on us.

About 80% of Hydrilla’s biomass is in the upper two feet of the water column. Branching stems grow horizontally, forming impenetrable mats.

Judy Preston is a local ecologist active in the Connecticut River Estuary. This is her second article for Estuary about a non-native, invasive plant species. Previously she wrote about water chestnut in the Spring 2020 issue.
Subscribe Today
\