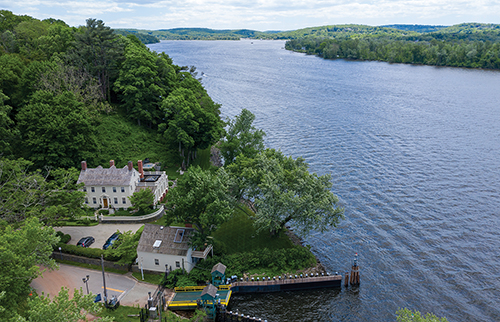 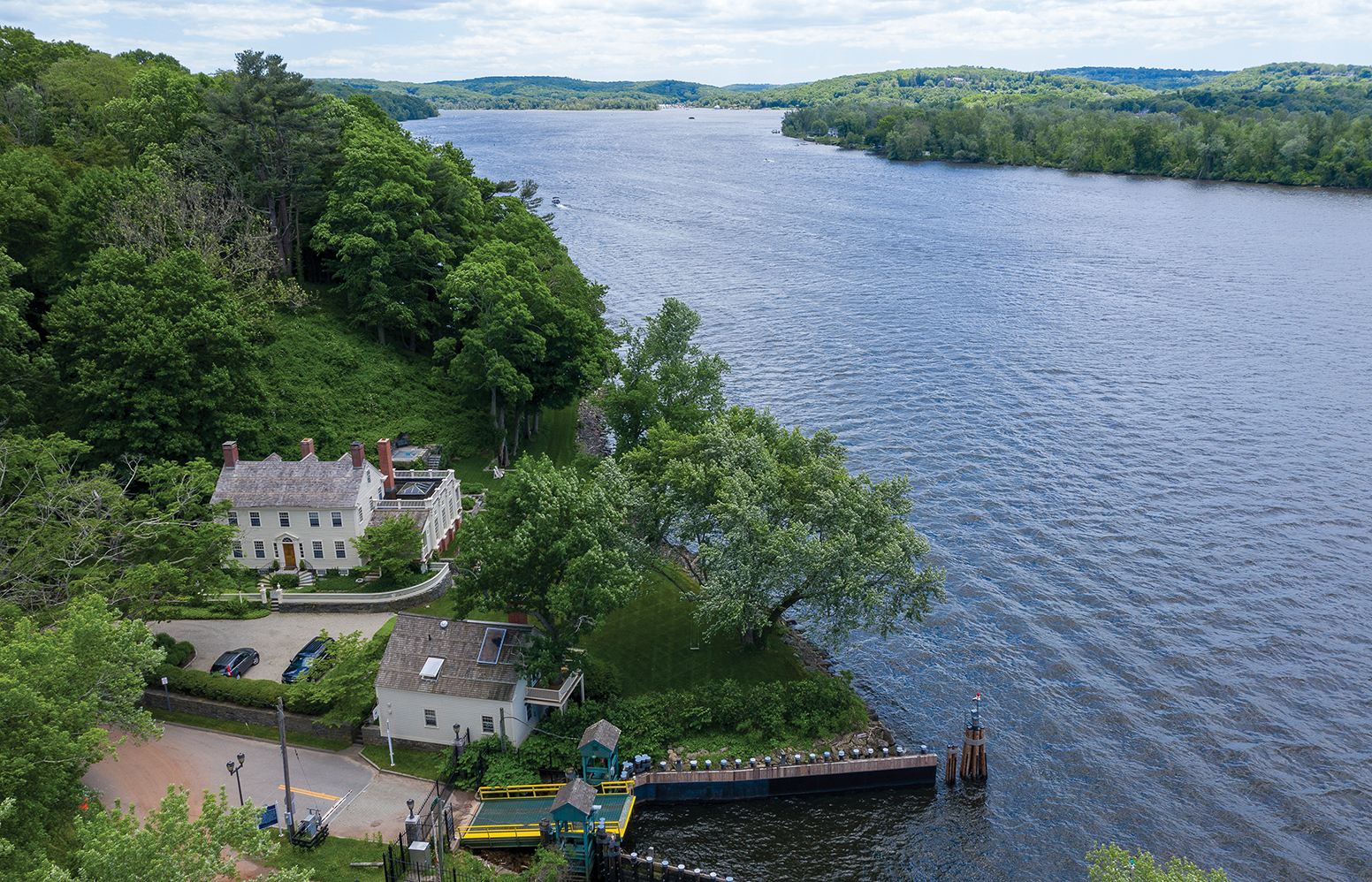 Dr. Alice Hamilton lived in this house along the Connecticut River next to the ferry landing in Hadlyme, Connecticut, for half of her life. She died here and is buried less than half a mile away. The house is still a private residence.

The car bumps over the railroad tracks and along a marsh to the end of the road. A few men in white outfits wave you over a small metal drawbridge and onto the historic 1949 Chester-Hadlyme Ferry. With a lurch, the 100-ton ferry leaves the west bank, chugging across the gently lapping waters of the Connecticut River. A jet skier zips by, an eagle hovers in the distance, and high on a hill to the northeast, William Gillette’s fieldstone folly beckons to you. Perhaps you are headed there for a tour, or maybe to play a few rounds at the Fox Hopyard Golf Club. Whatever inspired you to cross the river in this centuries-old manner, it is likely you will miss the unremarkable neocolonial house by the dock and the cemetery a few yards down the road. But this was where one of the most important women in American history, Dr. Alice Hamilton, lived and died and rests today. 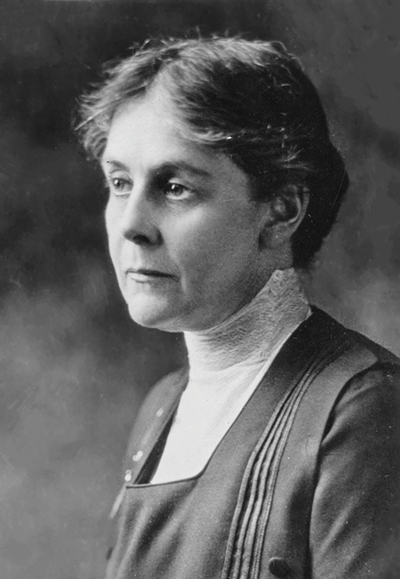 Alice Hamilton first came to the Connecticut River valley from Fort Wayne, Indiana, in 1886, when she joined her older sister Edith and many of their aunts and cousins at Miss Porter’s School. Walking the banks of the Farmington, Alice learned the skills necessary to go on to medical school, to get a job she said would be “of use anywhere.” There were 4,500 female doctors in the states already, and she went to the University of Michigan, took internships, and worked in a hospital laboratory. Writing to Edith, she said, “The work is fine, but it is a pretty lonely desolate sort of life.”

Unsatisfied with traditional medical practice, Alice decided that she “must do scientific work.” So, she continued her education, studying bacteriology and pathology, becoming a professor at Northwestern University and then working at Chicago’s Hull House, the social experiment founded by Jane Addams and Ellen Gates Starr. She taught classes there, ran the baby clinic, and worked as a doctor. But she was now 30 years old and felt that she still had “one great fundamental” failure—to find her true calling.

Then, during a typhoid epidemic she captured flies, tested them, and presented her conclusion, that sewage and poor plumbing was at fault, to the Journal of the American Medical Association. It was the beginning of her interest in public health. She then studied subjects like cocaine and tuberculosis, and finally in 1907 began to focus on the health problems of the poor factory workers of Chicago, studying phosphorous and lead. The Illinois Commission on Occupational Diseases appointed her medical investigator in 1910, a post where she could integrate all her knowledge and skills.

Her focus was industrial toxins, principally lead, widely used in a number of manufacturing processes. At that time, no one knew the true extent or complexity of lead poisoning, how it affected the nervous system, leading to senility, miscarriages, and other horrors. Hamilton used “shoe leather epidemiology,” visiting hundreds of factories, hospitals, and workers’ homes. In one instance, she followed one suffering worker’s trail to a sanitary-ware enameling factory, where the enamel was made with 20 percent soluble lead. She didn’t just find problems, she offered solutions to the managers and owners, like outfits that could be removed and washed at the end of each shift, something later adopted by many industries.

She joined the Department of Labor to take her work in industrial toxicology national in 1913, even though the salary depended entirely on whether her reports were accepted. During World War I, she investigated weapons manufacturing, and she convinced many factory owners to fix their problems by themselves.

She often visited an old friend from Miss Porter’s School, suffragist Katharine Ludington, who now lived in Old Lyme. She fell in love with the Connecticut River again, and Katharine encouraged her to move there, even finding her the Federal-style house by the ferry. She loved the “charms and delights” of the town of Hadlyme, which she also referred to as her “child.” Although she was already 50 years old, her amazing life was only half through, and she would spend the rest of it overlooking the ferry from this spot. Her cousins moved nearby, and her sister Edith visited often.

The catalyst for this second act was an offer from Harvard University to be an Assistant Professor of Industrial Medicine. She would be the first female professor of any kind to enter “the last citadel;” since she was the foremost expert in the field, they didn’t really have a choice. She thought it ridiculous, commenting that “I am not the first woman who ought to have been called to Harvard.” She was not allowed to march in commencement or get faculty tickets to football games, but she ignored these snubs and gave lectures, worked as the associate editor of the Journal of Industrial Hygiene, and wrote Industrial Poisons in the United States, a book that eventually changed the way American manufacturing did business. She accepted the commute without complaint, never considering moving away from her beloved river. 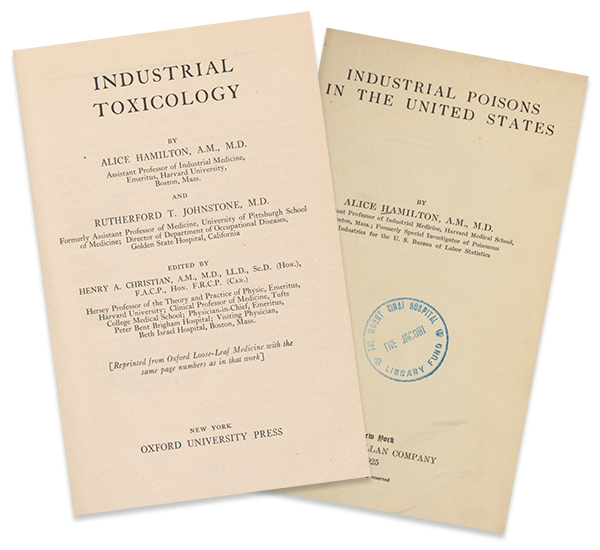 Image Credit: From the collection of the National Institute of Health

In 1924, Hamilton was appointed to the Health Commission of the League of Nations. She investigated benzene in the rubber and canning industries, finding to her shock that it was so dangerous that just a small amount was enough “to poison or even to kill.” She worked with President Herbert Hoover, who appointed her to the Research Committee on Social Justice. She studied carbon monoxide poisoning in steel workers, pulmonary tuberculosis in tombstone carvers, hand conditions in jackhammer operators, and mercury poisoning in hatters, something that had been plaguing her neighbors in Danbury, Connecticut, for over a century.

She wasn’t able to convince everyone. She testified about the dangers of leaded gasoline, though it would poison 68 million children in the decades before anyone followed her recommendations. But she made a beginning, using scientific evidence to convince society that changes needed to be made. She also constantly and tirelessly promoted the radical idea that health was something public, rather than private, an idea that seems natural and normal to us today.

Her 1934 book Industrial Toxicology came out at an age when most people retire. A year later, Harvard actually forced her to retire at the mandatory age of 66, believing her professional life to be over. What Harvard did not know was that despite her exposure to dangerous chemicals and toxins, she would live for another 35 years. Indeed, she soon turned her attention to rayon manufacturing and paint silicosis. She documented her life’s pursuit in a memoir called Exploring the Dangerous Trades. At age 80, she was still a consultant for the Department of Labor and revised Industrial Toxicology once again.

Every morning, she watched the ferry cross the river, wrote letters and lectures, and then cooked a big lunch for herself and her many guests. She spent the afternoon gardening, enjoying the breeze, and walking through the grounds of the new Gillette Castle State Park. At 88 years old, she considered that “life is still as interesting as ever.”

She often spoke on other issues, too, like the Sacco and Vanzetti murder cases, meeting with the governor of Massachusetts to try to stay their executions. She began supporting the Equal Rights Amendment in the 1950s, appealed the death sentences of Ethel and Julius Rosenberg, and spoke against the deportation of naturalized citizens on suspicion of subversive activities. Her opposition to Senator McCarthy’s “witch hunts” got her placed on the FBI watch list, even though she was in her nineties. She ignored this particular “honor,” even as other honors rolled in from Eleanor Roosevelt, the National Women’s Hall of Fame, and her adopted state of Connecticut. But her real honors were the laws and protocols that help millions of people stay safe every day. 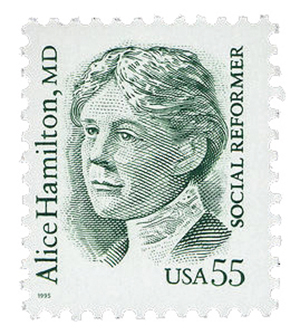 While Alice worked practically, in the realm of medicine and politics, her older sister Edith worked in a more abstract realm, weaving history and philosophy, bringing ancient thought into the modern world. Her books on Greek culture sparked a renewal of interest in the classics, and she was honored by King Paul of Greece with the country’s Golden Cross of the Order of Benefaction. She kept visiting her sister at the ferry house, and when she finally passed away at the age of 95, she was buried in the nearby cemetery on Hadlyme Cove. Alice herself kept going strong, though her mobility was restricted by a series of small strokes. She watched the ferry cross the river for a few more years, and in 1970 she passed away at 101 years old.

Three months later, the Occupational Health and Safety Act began protecting American workers from on-the-job hazards, and it has done its job for 50 years. Most of us who cross the ferry at Hadlyme are the beneficiaries of that Act, and of all the work by Alice Hamilton. She used science to save us from problems created by science, and she suggested policy solutions that would help us all survive the developments of the industrial age. American public health is stronger for it.