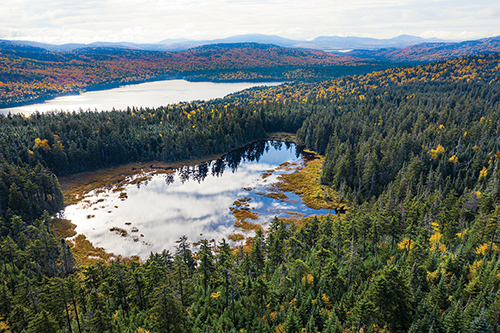 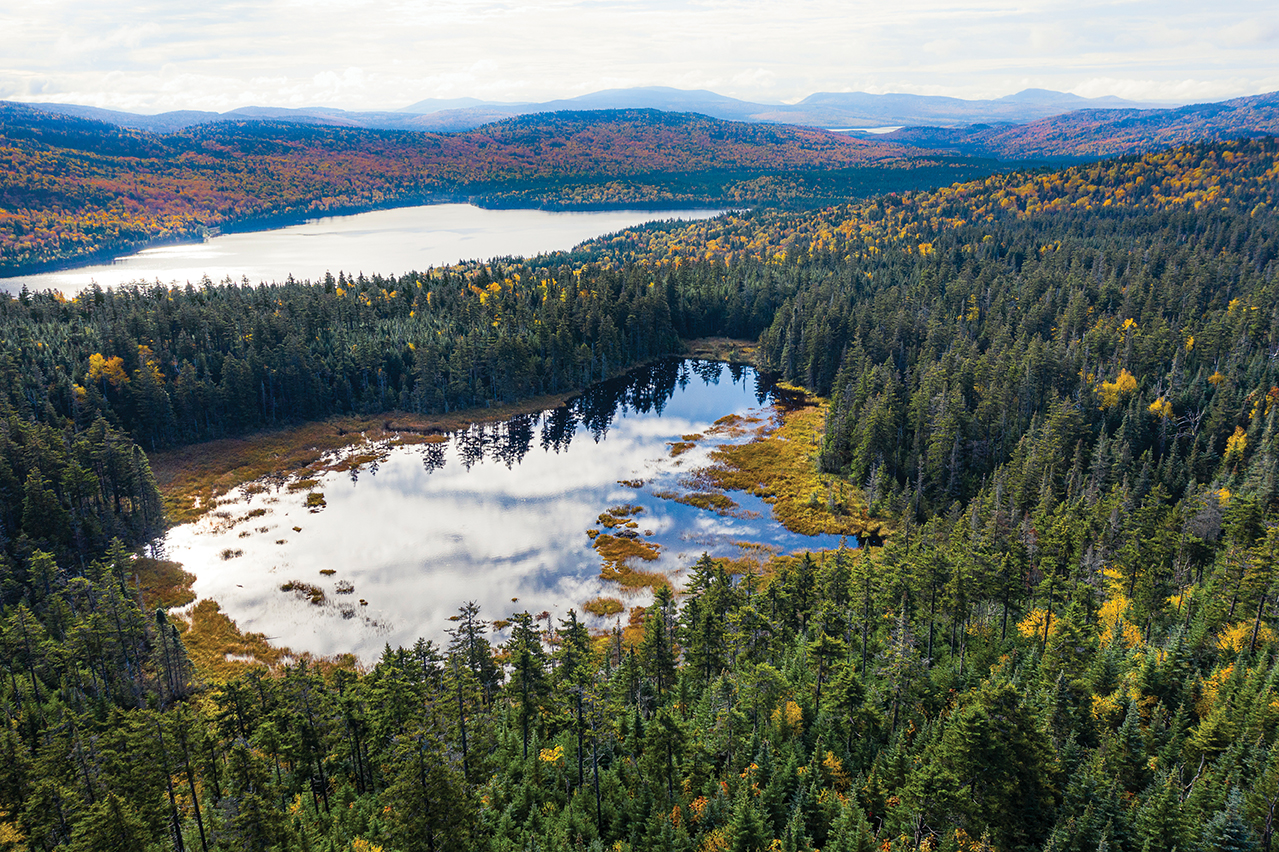 The photographer stands with one foot on each side of the Connecticut River
where it begins its journey from Fourth Connecticut Lake in Pittsburg, NH.

The first thing that hit me was the smell—a damp, woodsy, uplifting aroma that can only be described as the scent of Christmas. After several hours in the stale air of my car, the pungent aroma of balsam fir was invigorating. The weather was another matter. A cold, drizzling rain greeted me that October morning in Pittsburg in the rugged northern corner of New Hampshire where the 410-mile Connecticut River rises. Indeed, for the three days I spent on a photo assignment to Fourth Connecticut Lake, the headwaters of the Connecticut River near the Canadian border, the nightly patter of rain on my tent was a constant companion. I would have only one morning of sun to work with before I had to head home.

That day, I rose early relieved the rain had finally ceased. I started my trek at the US border station on US Route 3, following the trail as it weaves along the US-Canadian border, mostly in the US but sometimes zigging over onto Canadian lands. After scrambling up the international trail for half a mile or so, I arrived at a sign telling me I was only a few hundred yards from my destination. A quick jaunt through an archway of balsam fir and I was there.

The incongruously named Fourth Connecticut Lake is a boggy, 2 ½-acre pond only five feet deep. It’s hard to believe the small, shallow body of water is the source of New England’s mighty river, one that produces 70 percent of Long Island Sound's fresh water, discharging at a flow rate of 19,600 cubic feet per second. Interestingly, the waters of this glacially formed tarn are quite acidic and support a bog mat. The forest surrounding Fourth Connecticut Lake is predominately balsam fir and red spruce, with some birch and ash mixed in. Deep scallop cuts and piles of wood chips all about alerted me to beaver activity.

As I walked on the half-mile trail around the lake, I crossed the Connecticut River twice. The dam-building efforts of Castor canadensis had split the outflow from the lake, but a few hundred yards below, the two streams joined to form the beginnings of the Connecticut. From a modest glacial tarn, the Connecticut River flows into Third Connecticut Lake, then Second Connecticut Lake, and finally First Connecticut Lake, gaining strength as it journeys southward through four New England states and on to the sea. Before I left, I bent beside the little outlet of Fourth Connecticut Lake and let some water from my bottle spill into the stream, delighting in the thought that my water would mingle with the drainage from a network of rivulets, streams, and rivers in the 11,000 square mile watershed, before meeting the upflowing tides of Long Island Sound 410 miles distant. I was heading in that direction, too.