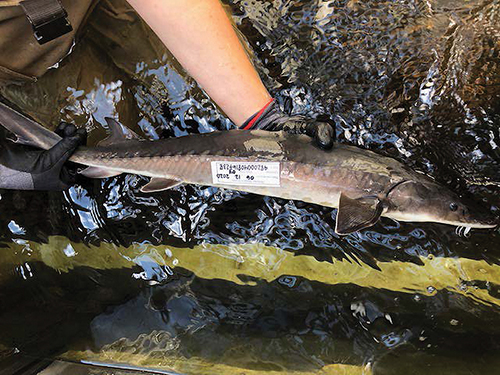 A Magnificent Obsession: Our Fascination with Wildlife (Part 2)

In Part 1 of “A Magnificent Obsession,” we began an investigation of why we humans are so fascinated with wildlife. Every five years, the National Fish and Wildlife Service does an extensive study of how many people in the United States—by geography, education, age, sex, race, and ethnicity—are engaged in fishing, hunting, and wildlife-associated recreation (defined as observation, photography, feeding, visits to parks/natural areas, and maintaining plantings/natural areas). From 2011 to the last study in 2016, the total number of wildlife watchers grew from 71.8 million (29% of the population of people 16 years and older) to 86 million (32 % of the population of people 16 years and older). Commensurately, expenditures on equipment, supplies, and eco-trips related to wildlife watching grew 38% from $54.9 billion to $75.9 billion. The study assembled data for nine regions across the US, one of which is New England, but did not give state-by-state information to enable us to examine the Connecticut River states in detail. However, with 36% of its population of people 16 years and older engaged in wildlife watching, New England lead the rest of the regions in the relative numbers of wildlife watchers in 2016.

We will now consider another source of fascination with wildlife to continue our investigation. 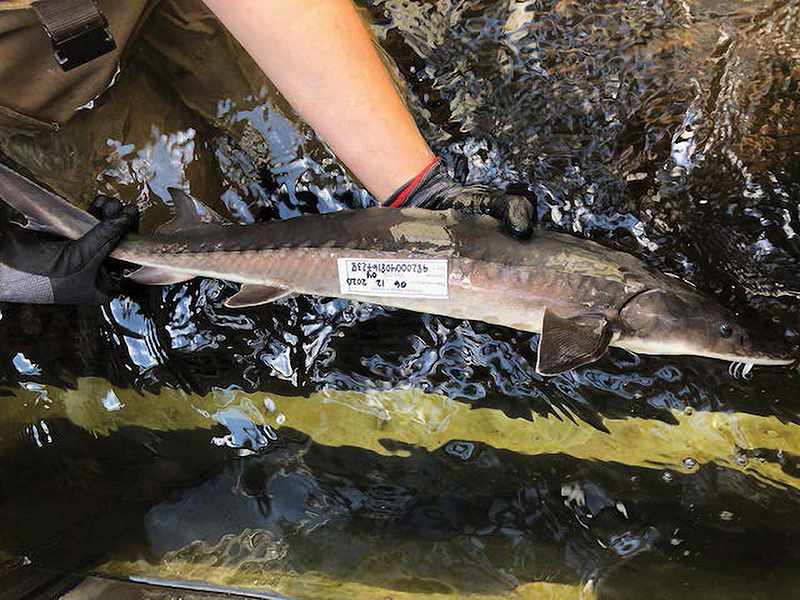 An adult shortnose sturgeon, a federally-listed endangered species, is inspected and documented at the Holyoke Dam Fishlift in Holyoke, Massachusetts. After inspection, the fish is released upstream in the Connecticut River.
Photo courtesy of Holyoke Gas and Electric Co. via Steve Gephard/CT DEEP

Awe and Beauty. The emotion of awe is sometimes defined as a mixture of surprise and fear, to which I would add love of beauty. Among the human population in general, there appears to be a common, cross-cultural thread of fear of some wildlife, especially snakes and arachnids, which come in both non-venomous and venomous varieties. This fear is likely taught by family and peers, but it is less likely to be the product of direct experience, such as learning about the perils of burns by touching a hot stove. Awe breeds curiosity breeds fascination breeds the desire to observe the fearsome object closer. In my case, caution to take the accompanying photograph of a juvenile eastern timber rattlesnake, a chance encounter in the watershed, was overcome by my fascination with the sheer beauty of this animal. 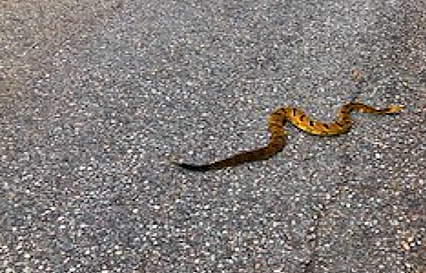 Sporadically, the morning news reports on people who got too close to wildlife, possibly to feed and touch them, without realizing that a free-roaming bison is not a domestic cow or that a hungry bear can be enormously powerful, bad-tempered, and do serious damage to both people and their property. It’s worth noting that some rail trails in the Connecticut River watershed have posted protocols of how to behave if you encounter a bear while walking, running, or biking.

Empathy. When we observe wildlife, we see living, breathing creatures that, like us, are trying to cope with their environments in order to survive and propagate their species. When I see a tiny black-capped chickadee in a sub-zero, wind-driven snowstorm, I wonder whether it will survive the night. I empathize with its struggle to hold on to its thread of life. A fleeting thought, “I’m glad that I’m not a chickadee that has to live outside in this weather,” passes by. The next day when I see this bird at my feeder, I rejoice that it has made it through, and I look upon it with wonderment for its rugged resiliency. Gazing upon wildlife in any season fills me with amazement how the creature can negotiate its surroundings to find food, water, shelter, and avoid predators.

Science – The Ultimate Curiosity. I am always fascinated by non-invasive scientific inquiries that involve wildlife. One clever research project from MIT translated the biological concepts of DNA, genetic engineering, and the lifecycle of fruit flies into lessons for business (Charles Fine, Clockspeed, Perseus Books, 1998). Fruit flies speed up their evolution by many times in a contracted period because of their short, two-week lifespan. This fact has been well exploited by researchers in genetics. The bridge to industry is explained by the concept of “clockspeed,” which measures how fast an industry’s products, processes, and organizations evolve and how their evolution can benefit from principles of genetic biology. In the watershed, there are several businesses, particularly aerospace original equipment manufacturers and their smaller suppliers, that can take advantage of these insights. For now, we’ll leave the broader lessons for human society to a future time.

Another fascination with the lives of animals derives from seeing what an animal sees, as it follows its daily foraging and hunting routine or annual migration, by mounting a small video camera directly on the animal. In a recent example, wildlife biologists captured a video shot from a fur seal, journeying from its home on an Australian island to Tasmania, that yielded previously unknown information on the several creative tactics the seal had developed to evade being eaten by great white sharks. Closer to home, wildlife biologists have installed video cameras at underground viewing windows to monitor the migration of fish swimming upstream through selected fish ladders on the Connecticut River and its tributaries.

Finally, humans are fascinated by the ability of animals to provide early warning—the so-called mine-canary effect—of impending catastrophes, which include earthquakes, fire, low-pressure weather systems, environmental poisons, and climate change. There is also knowledge that debilitating viruses, like the coronavirus, can be detected in animal populations and controlled before the diseases ravage humans. The same can be said for the signals that wildlife species have been telegraphing about climate change and rising sea level. The distinctly human endeavor of scenario planning for the future works only if humans pay attention to the faint signals of change that foreshadow which one of several alternative scenarios is coming true. Therefore, it would behoove humans not to ignore what is happening in the wildlife kingdom.

The draft for this part expanded beyond a reasonable length for a blog, so we will conclude next time with a Part 3 to cover our final source of fascination, “Entertainment with Purpose.”