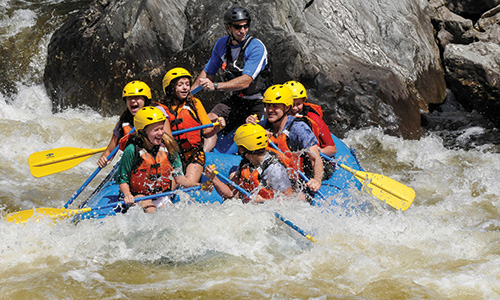 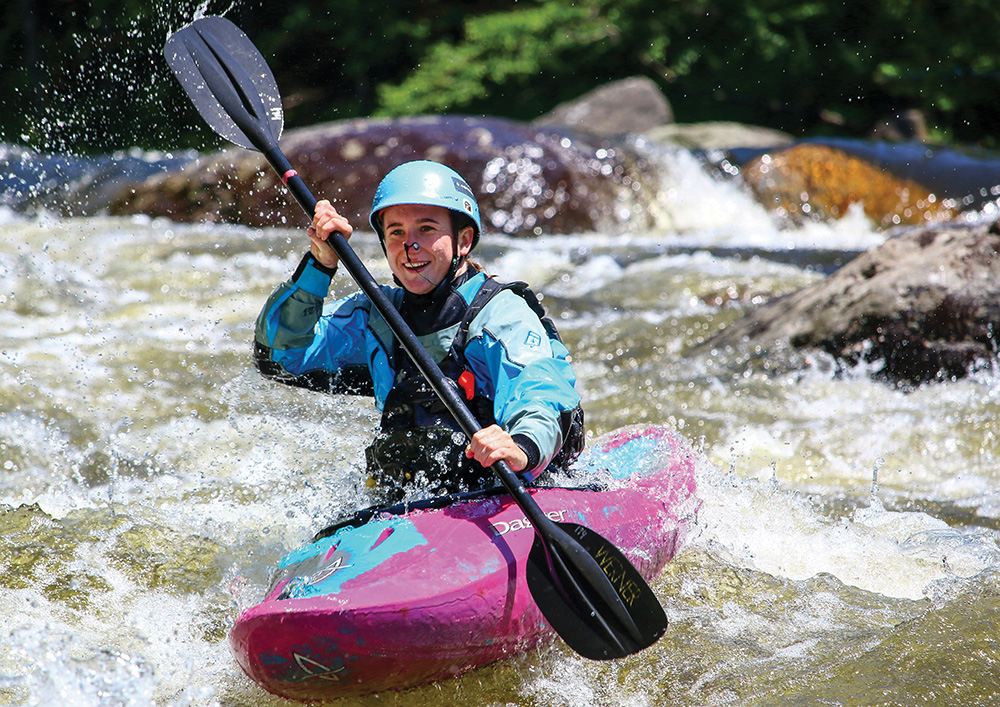 There is perhaps no better way to enjoy the outdoors—particularly the parts of it inaccessible by roads—than by canoeing or kayaking our rivers and creeks. And for many people, the solitude, natural beauty, and sense of exploration are only enhanced by the excitement and the challenge of navigating whitewater river rapids. But where to do it? Here in the eastern United States, there are three particularly good concentrations of recreational whitewater opportunities: the southeastern rivers flowing from the Great Smoky Mountains near Asheville, North Carolina, and into the Tennessee River watershed, the Mid-Atlantic rivers and creeks clustered in the highlands of the Monongahela and Potomac River basins near the West Virginia/Maryland border, and the northeastern rivers comprising the watersheds of the Connecticut, the Saint Lawrence, the Merrimack, the Kennebec, and the Penobscot. Each contains a variety of rivers large and small, its own unique history in the relatively short history of whitewater sport, as well as its own whitewater festivals, dam releases, races, and traditions. 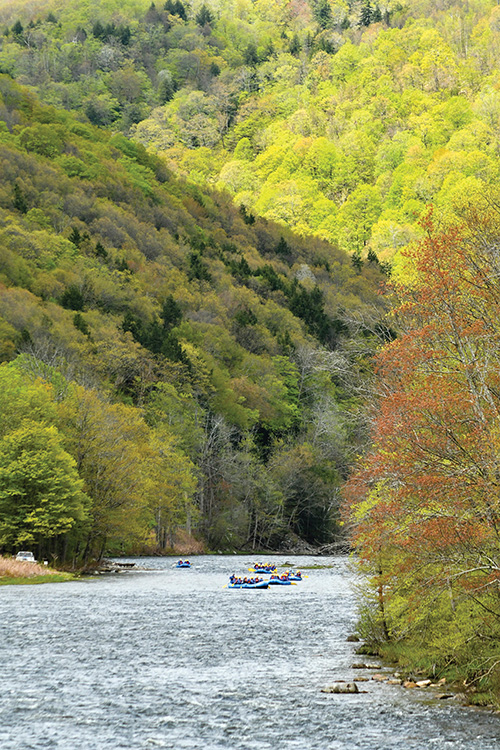 Perhaps no single river basin on the East Coast so quintessentially represents the plethora of whitewater recreation offered in its entire region than the Connecticut River watershed. The Connecticut starts small near the Canadian border, gathering rivers and creeks from high in the White, the Green, and the Berkshire Mountains. The whitewater ranges from steep, waterfall-laden creeks suitable for expert kayakers, to intermediate rivers lower down in the drainage, more moderate in volume and gradient, to riffling beginner stretches popular with rafts, tubes, canoes, and kayaks. There is even whitewater on the mighty Connecticut River itself—if you know where to look. As in the Southeast and the Mid-Atlantic, whitewater canoeing and kayaking in the Connecticut drainage—particularly in the summer—relies largely on dam releases. While there are hundreds of good whitewater rivers within the Connecticut River watershed, four in particular stand out.

The jewel in the crown of New England whitewater is the Deerfield River, a large tributary of the Connecticut, rising in the southern Green Mountains, and flowing through northern Massachusetts. Immensely varied, the Deerfield contains not only the best beginner stretch of whitewater in the entire Connecticut watershed, but also the best intermediate stretch, and the best expert stretch. It’s all packed into the Deerfield’s first thirty miles from just north of the Vermont border to the river’s hard left turn in Charlemont, Massachusetts. 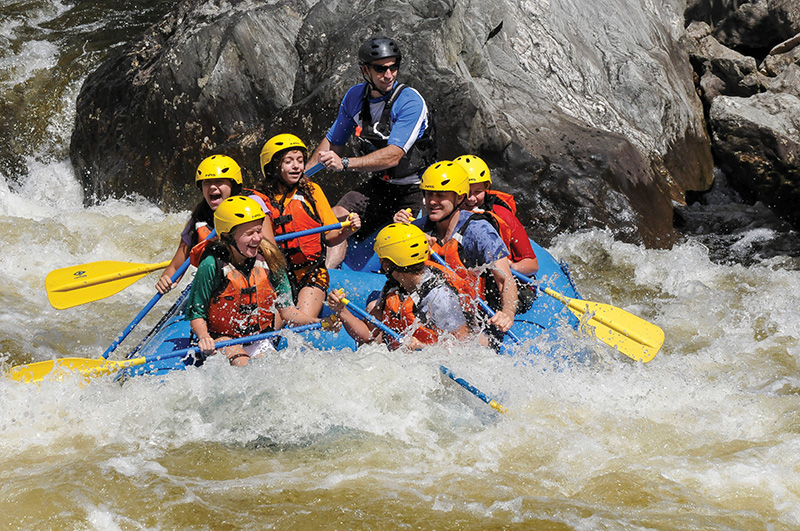 These three stretches are separated by two dams, both of which supply plentiful—scheduled recreational releases, largely the result of the Federal Energy Regulatory Commission relicensing process in the early 1990s. Only the upper expert stretch, on the West Branch of the Deerfield in Readsboro, Vermont, lies above the dams and therefore relies on rainfall. This section, visible along Route 100, is home to Tunnel Vision, one of the most notorious expert rapids in New England, a precipitous labyrinth of rocks and holes, which ends by plunging straight into a tunnel under the highway, inside of which the rapid continues its torrid pace.

Just downstream and over the Massachusetts border, the #5 Dam provides consistent scheduled weekend releases on the fabled “Dryway” section of the Deerfield, the most acclaimed intermediate stretch of rapids in New England, a summertime whitewater mecca in the hamlet of Monroe Bridge, and home to a booming summer raft business. 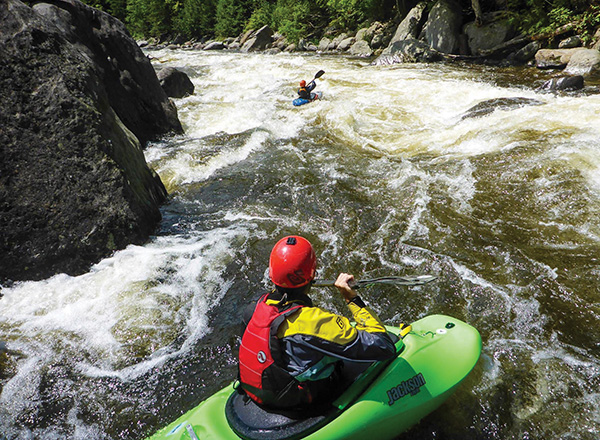 Not far downstream—below another dam—is the most celebrated beginner stretch in the region: the Fife Brook section of the Deerfield, boatable nearly all summer long by canoes, kayaks, tubes, and rafts, with scores of class I and II rapids winding through a lush river valley, and ending with a plunge over the famous Zoar Gap rapid.

Perhaps the region’s most deeply revered whitewater is found on southeastern Vermont’s major river, the West. If there’s such a thing as a celebration of the whitewater season, a co-mingling of all the various tribes of New England’s river enthusiasts, it’s undoubtedly “West Fest”—the late-September water release from the Ball Mountain Dam in Jamaica, Vermont. Canoeists and kayakers from across the region flock to this lush river valley to enjoy gorgeous fall colors, an inexpensive riverside shuttle service offered by Jamaica State Park, and run after run down the continuous, three-mile long gold standard stretch of intermediate whitewater below the dam, as well as the stellar beginner stretch that picks up at the park and hugs Route 100 downstream.

The Farmington River, the major whitewater arm of the Connecticut in southern New England, contains three of the best stretches of whitewater in the southern Connecticut River watershed.

High in the drainage, the upper Farmington River near New Boston, Massachusetts, is a serpentine stretch of technical intermediate rapids, and the home of the long-running Farmington Slalom, the final race of the season for the New England Slalom Series of races, held during a weekend dam release in mid-October. Just upstream, Fall Creek—the path the water takes from the Otis Lake dam into the Farmington—is one of the most notorious expert rivers in southern New England, famous for its steep, conveyor belt-style rapids, runnable each fall during the Otis Lake drawdown.

South of the border in Connecticut lays perhaps the most pristine stretch of the Farmington. The 14-mile stretch between Colebrook and Canton was designated a Wild and Scenic River by Congress in 1994. Near-daily releases from the Goodwin Dam make this section of river both a pleasant beginner river trip, as well as a first-class fly fishing destination.

Farther downstream, near its confluence with the Connecticut, lies the Farmington’s best known whitewater: the tumultuous Tariffville Gorge. Known to locals as “T-Ville,” this two-mile constriction is rarely too low to kayak. It is tame, low-intermediate fun during the summer and impressive, upper-intermediate-to-expert kayaking in the high-water spring. The Gorge hosts a yearly New England Slalom Series race in June, has been home to numerous freestyle and downriver competitions, and offers near daily summertime surfing at the famous play hole, easily accessible by a parking area and short walking trail. Most kayakers simply “park and play” here. Just downstream, the removal of the broken Spoonville dam in 2012 has cleared the river of unsightly (and dangerous) concrete debris.

The Connecticut River itself is a lumbering giant, most of whose impressive rapids were long ago dammed. Except in the high-water spring, when a huge surf wave nicknamed “Waveosaurus” appears near Holyoke, Massachusetts, there’s really only one set of whitewater rapids on the Connecticut River itself. Sumner Falls lies just south of White River Junction in Hartland, Vermont. Here the Connecticut descends a half-mile pitch of intermediate rapids, which, thanks to near-daily summer water releases from the upstream Wilder Dam, are navigable almost year-round. Beginners will enjoy putting in at the beach and ferrying across the myriad of currents at the bottom of the rapid, while more advanced boaters will spend hours on the famous surf wave out in the middle of the river. 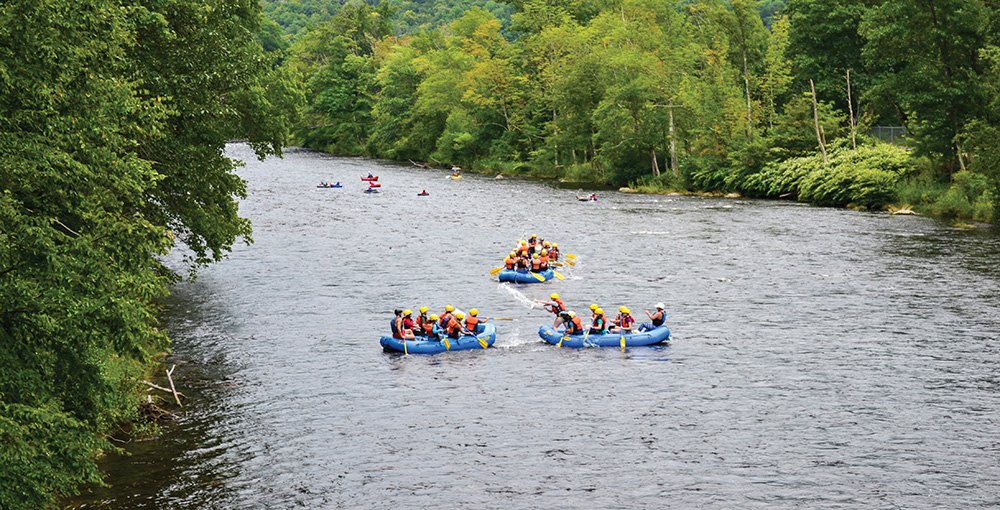 There is more—much more—of course. From the wilds of the Moose River, deep in the Northeast Kingdom, to the staircase rapids of Joe’s Brook in Vermont, to the myriad branches of the Westfield River, to the classic twists and turns of the Millers or the Mascoma, the Connecticut River watershed is a truly unique resource for whitewater recreation. This article is only intended as a primer—and as a reminder that there is no better way to see the countryside of this incredible region than from the seat of a canoe or kayak.

Alden Bird has been canoeing and kayaking the rivers of New England for more than 20 years. He is the author of the book Let It Rain: A Paddler’s Guide to the Whitewater Rivers of New England, New York, and Eastern Canada. He lives in Vermont with his wife and son.