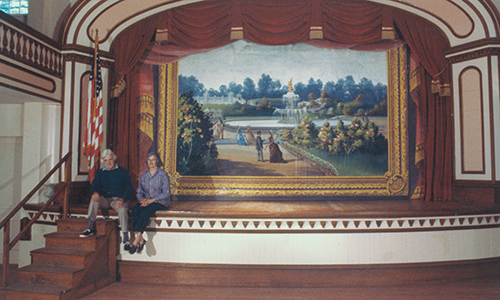 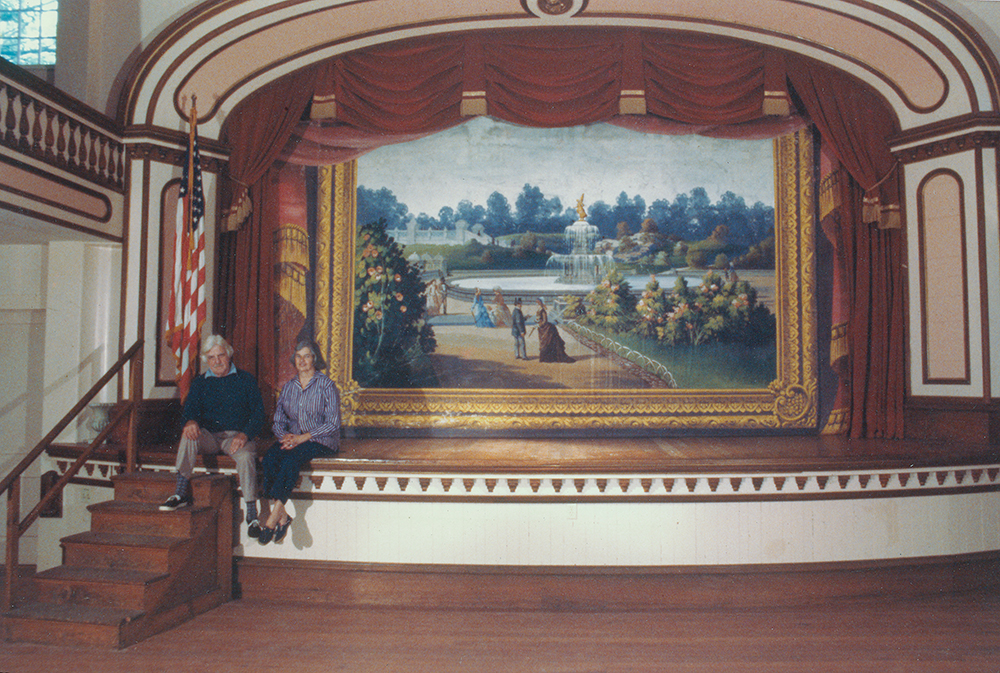 The Delaneys sit on the stage of the Chester Meetinghouse in front of the newly restored curtain.

They were instrumental in the renovation of the meetinghouse. Photograph taken sometime in the 1970s. 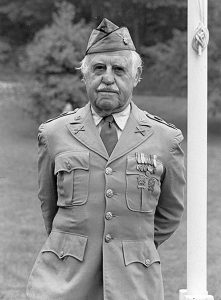 Edmund wearing his WWII uniform at a Memorial Day parade.

Born in Newark, New Jersey, Edmund Delaney graduated from Princeton and Harvard, then served in the War Department during World War II. Along the way he made friends with Franklin and Eleanor Roosevelt, Ella Fitzgerald, and artist Marcel Duchamp before practicing law in New York and directing the Oppenheimer Fund. In 1965, he met the managing editor of Antiques magazine, Barbara Snow, at a dinner party. They fell in love and married. 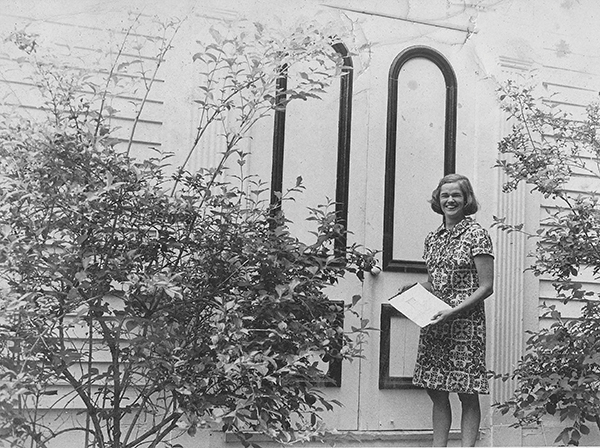 Barbara at the door of the restored meetinghouse. Undated photo.

Barbara had grown up in Hartford and attended Connecticut College, and convinced Edmund to move with her to Chester, a small village that had once been a shipbuilding site along the Connecticut River. In 1970, they moved into an 1815 Colonial-style home complete with period furniture, and Edmund got a job at a nearby Essex law firm. The couple immediately made an impact on the small town, embracing their neighbors and the River as old friends.

After forming the Chester Historical Society, Barbara served as its first president, led the restoration efforts for the Chester Meeting House, and later acquired an old mill for the society. 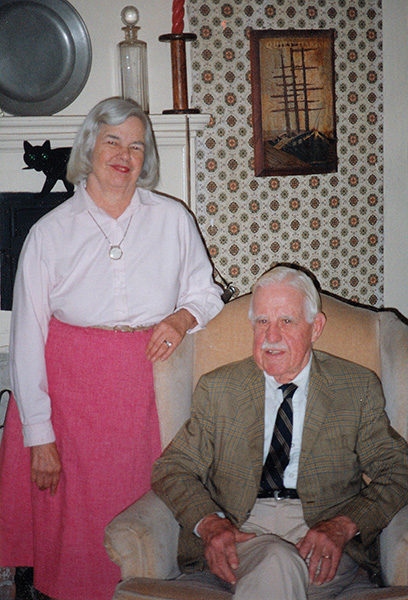 Barbara and Edmund at home in this photo from the 1990s

Like his wife, Delaney was a president of the Chester Historical Society. He was also on the Connecticut Historical Commission, the Connecticut River Watershed Council, the Middlesex County Revitalization Commission and the board of the Connecticut River Museum. But it was as an author that he would have his greatest impact. His most popular and influential book, The Connecticut River: New England’s Historic Waterway, tells the tales of people who transformed and were transformed by our mighty waterway. Beginning with the tentative explorations of Dutch traders and the settlement of Hartford by Thomas Hooker, the book highlights the attack on Deerfield, Massachusetts, during Queen Anne’s War, and tells the stories of the self-sufficient pioneers who pushed into the upper valley between New Hampshire and Vermont. With careful attention to historical sources, Delaney helps us glimpse the Industrial Revolution, the War of 1812, and the flowering of New England literature, all without leaving the watershed. Steamboats and floods, shad runs and West Indies traders, all come alive through Delaney’s careful pen.

“We realized you don’t do things all by yourself,” Barbara told the Hartford Courant in 1994. “I think people who do things work together and don’t do it for their own gain.” Edmund passed away in 2000, and Barbara lived another eighteen years before following him. But their legacy lives on, in a thousand small ways, in a million tiny changes in our culture. Through equal parts organizational skills and epic dinner parties, they shifted local perception about their adopted town and watershed, and reached beyond, up and down the river they loved.

There are dozens of people like the Delaneys up and down the Connecticut River valley, creating small nodes of preservation and compassion. Each one can make a difference, but together they can create a better world for us all.